Rebecca Wei lives in Rogers Park, and like many Chicagoans, she takes the ‘L’ everywhere.

“I pass by the Morse ‘L’ stop twice a day, every day, and once or twice a year, there’s a guy standing there from the alderman’s office, who’s like, ‘Do you want to vote on how to spend a million dollars?’ and I’m like, ‘Of course I do! Who wouldn’t want to do that?’”

Wei lives in the city’s 49th Ward, which is represented by Ald. Joe Moore. He’s been in office for 26 years, but nearly nine years ago, he became the first politician in America to use something called “participatory budgeting.”

Moore explains that, at its most basic, participatory budgeting is taking “part of a government budget and turning it over to the people to decide how that money is spent.” It’s a process that started in Porto Alegre, Brazil in 1989 and is now used by municipalities across the globe.

In Chicago, every alderman, every year, gets $1.32 million dollars in what’s known as aldermanic “menu money,” to spend on certain infrastructure projects, such as streets, sidewalks, and lighting. This year, nine aldermen used participatory budgeting, according to Participatory Budgeting Chicago, a group that helps guide the process in the city. And a few other aldermen use a different system to let residents decide how to spend menu money.

Like eating at a restaurant, aldermen can order what they want for their ward from a fixed menu of projects. But if you live in one of the wards that does participatory budgeting, constituents also get to sit at the table and vote for what they want off that menu.

We’ve touched on participatory budgeting in past Curious City stories, but Wei wanted to know more than just what it is. She wanted to know:

Is it good for communities? Is this an example of the community voicing their needs or is it just good PR?

Curious City will unpack how menu money was doled out before participatory budgeting came on the scene (and how it still is, in many wards). We'll also get into its shortcomings and its possibilities.

It’s better than the status quo

To understand the benefit of participatory budgeting, you have to understand how Chicago aldermen have historically used their annual menu money on ward projects.

“Most people think all they do is go to the alderman and say, ‘Godfather, I need my alley fixed,’” says Betsy Elsasser, who has lived in the Logan Square neighborhood for 33 years. “That’s the old way. So the new way is we kind of decide as a group what alleys need to get fixed and what not.”

At its best, menu money has traditionally been spent by aldermen in the ways they see fit, and the process is more or less unilateral. At its worst, it’s been used to reward political supporters in parts of the ward that can turn out the votes on election day, recalls Ald. Carlos Ramirez-Rosa (35th Ward).

“Well, I grew up in the 50th Ward and you know, God bless [the late former Ald.] Bernie Stone, may he rest in peace, but I remember crossing California going west, every street was resurfaced almost every year,” Ramirez-Rosa says. “They always had brand new lighting and then east of California, where he would lose the precincts consistently, I mean the streets were in shambles. Many people felt he was spending the bulk of the menu money west of California, where he was getting the bulk of the vote.”

Think back to our restaurant menu analogy: Some aldermen might be ordering lobster for themselves and a few key supporters. But aldermen who are doing participatory budgeting (or some version of it) are inviting everybody to sit at the table, and they’re all ordering an appetizer, an entree, and dessert to share.

Joyce Brody, who also lives in the Northwest Side’s 35th Ward, says the participatory budgeting system gives the community a chance to make sure all areas of their ward are getting some help. She explains there are five neighborhoods in the 35th Ward, and she says one of them — Hermosa — often gets ignored by the city.

“What we do in participatory budgeting is make sure their needs are met first because they’ve always been ignored … by the former alderman and the different departments of the city — and it shows,” Brody says. “We try to change that in this little bitty way.”

So, to recap: Supporters say participatory budgeting is good because it takes some of the politics out of government spending, and it allows residents to push for fixes in neighborhoods the city might otherwise ignore.

But, it’s an itty-bitty part of the overall budget

One million dollars may seem like a lot at first glance, but it’s a very small part of the city’s overall spending.

The city budget for next year is $8.6 billion. Of that, about $1.2 billion goes to infrastructure, like road repair and street lighting. The menu money doled out to aldermen accounts for $66 million of that total infrastructure spending — just about five percent. And of the city’s 50 aldermen, only about a dozen use some form of participatory budgeting.

And the city’s annual budget does not include the public money for schools, parks, transit, and housing, which are each controlled by separate boards that are partially appointed by the mayor.

So if you think about the restaurant analogy, it’s great to be sitting at a table with your alderman deciding what to eat, but then you realize there’s this huge buffet in the next room — and it’s invite only.

“A frequent criticism of residents who participate is kind of like, they learn a lot, and they also learn how much everything costs and a million dollars does not go very far,” says Maria Hadden, senior project manager with the Participatory Budgeting Project.

There are cities all over the world that set aside larger proportions of their budget for participatory budgeting. In Paris, residents vote on how to spend nearly 100 million Euros across the city and in their own neighborhoods. But when it comes to American cities, Hadden says, the amount of money subject to participatory budgeting in Chicago is pretty typical.

Not all wards are created equal

Which brings up another criticism: Not all Chicago wards are the same size, and they each have varying infrastructure needs.

“I have 700 streets and alleys, so I’m not even getting to the sidewalks” with participatory budgeting money, says Ald. David Moore (17th Ward), who represents a sprawling South Side ward that covers parts of Englewood, Auburn Gresham, and Marquette Park. He notes that downtown and other wards have far fewer streets and alleys, so “they get to take that money, [and say] ‘Let me do a doggie park, let me put up big pretty lights.’ They can make it pretty.”

Moore says his residents also don’t understand that there are restrictions on menu money. It can’t go toward hiring more teachers or police officers, even if that’s what his residents want. Those budgets are primarily controlled by the mayor, the City Council, and the separate boards that govern the city’s sister agencies, such as Chicago Public Schools and the Chicago Transit Authority.

Moore says if residents want items that aren’t on the menu, they’re barking up the wrong tree.

“The mayor runs it all and that’s the bottom line,” he says.

What if participatory budgeting went beyond just street repair?

Critics are quick to lament the small amount of money involved in participatory budgeting, the restrictions on how it can be spent, and the lack of consideration for each ward’s needs.

Even our questioner, Rebecca Wei, laments the smallness of what was being voted on.

“This feels a little like let’s throw them a bone and let them vote on some mundane things you can’t possibly argue about,” she says.

But the city shouldn’t rely on the menu money process for bigger infrastructure needs, says Joe Ferguson, the city’s inspector general. Ferguson says asking residents to vote on really basic needs — like filling potholes and repairing alleys — is problematic. He audited menu money spending earlier this year and found vast inequities in the quality of infrastructure across wards.

To extend our restaurant analogy, it’s as though the city government is asking aldermen and voters to decide who gets to eat and who goes hungry. Not only is that unfair, Ferguson says, but basic infrastructure should be funded as part of a centralized plan done by professional city planners, not left to individual wards.

But Ferguson also says that doesn’t mean participatory budgeting is inherently bad. He just thinks it’s being applied to the wrong type of spending. In other words, let the residents vote on what’s for “dessert,” not the main course.

Residents tend to want to spend the money on exciting, discretionary projects that improve the livability of a neighborhood, such as murals, parks, or flower beds. He says instead of using menu money, the city and the aldermen could decide to create a pool of money that’s specifically meant for participatory budgeting.

“Maybe the approach should be that there is a pool created for [participatory budgeting] that comes out of a combination of the city, CPS, maybe CTA, and the park district,” he says.

‘Excited by the possibilities’

The current pool of money that’s subject to participatory budgeting in Chicago may be small and restricted. But when you’re evaluating whether it’s good for neighborhoods, you’ve also got to consider its non-monetary benefits, says Maria Hadden, a founding board member of the Participatory Budgeting Project.

The process breeds civic engagement, Hadden says. Once people get a taste of participatory budgeting, they tend to want more.

For Hadden and other participatory budgeting boosters, that increased community engagement is just as important as any specific decision about how to spend $1.32 million in a ward.

Take Betsy Elsasser, the woman from Logan Square: A couple of years ago, there were some garden beds that were falling apart, and a problem with a fountain, so she worked to get repairs on the participatory budgeting ballot. After a successful round of community voting, they got fixed.

The impact may be small, but to Elsasser, it means a lot to be able to improve something in your own backyard.

“I don’t know that we’re so frustrated by the limitations of it,” Elsasser says, “but I’m more excited by the possibilities.” 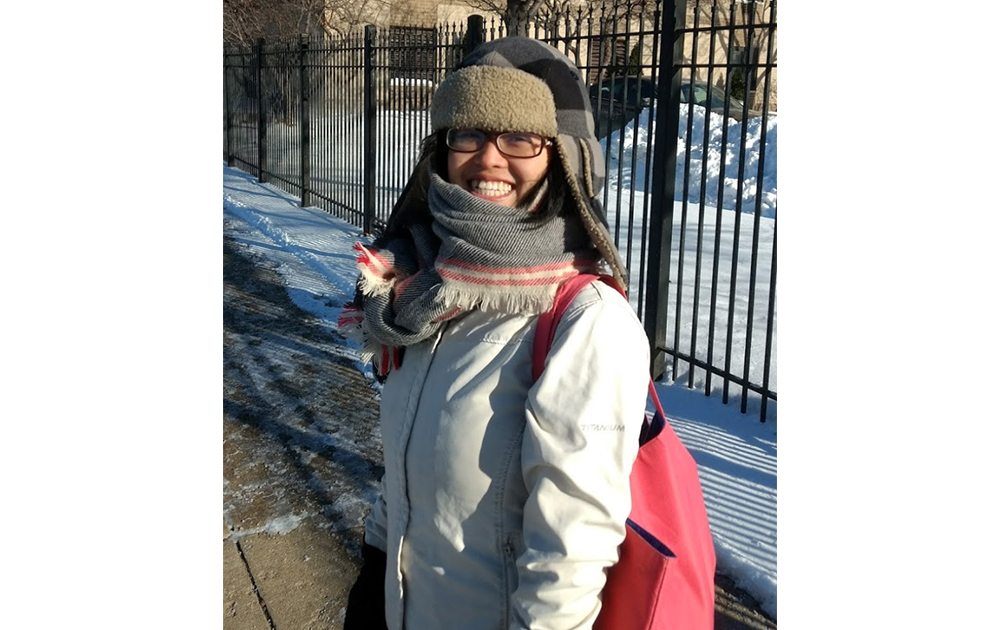 Rebecca Wei grew up in Chicago’s Lakeview neighborhood and in Naperville. She attended Case Western Reserve University in Cleveland, and earned a Ph.D. in mathematics from Northwestern University. She currently works as a data scientist at AllState.

“I just assumed aldermen got pots of money every year and I didn’t realize the money came with specific tags,” Wei says.

She says meeting people like Joyce Brody and Betsy Elsasser at the pumpkin festival in Logan Square made her see that participatory budgeting can help keep elected officials accountable. It’s one thing, she says, to elect someone to office, but there has to be a way to keep them “true to their word.”