Editor’s note: This article was first published in 2016, on the 50th anniversary of Dr. Martin Luther King, Jr.’s arrival on Chicago’s West Side.

He didn’t come to make a speech or lead a march. King actually moved here, to a run-down apartment on the city’s West Side. He stayed for most of 1966.

He was launching what he considered the next phase of the civil rights movement — a phase that had as much to do with economics as it did with race.

If King’s Chicago chapter is remembered at all, it’s usually for the open housing marches he led through all-white communities like Gage Park — and the violent reaction to them by whites. Those summertime open housing marches eventually helped blacks move to areas that had been off-limits, and they paved the way for the nation’s Fair Housing Act of 1968.

But the housing protests were only one part of a much bigger campaign — a “Campaign to End Slums.”

“The first significant Northern Freedom Movement ever attempted by major civil rights forces” would be “directed against public and private institutions which … have created infamous slum conditions directly responsible for the involuntary enslavement of millions of black men, women and children,” King declared in a statement announcing “The Chicago Plan.”

“Our primary objective will be to bring about the unconditional surrender of forces dedicated to the creation and maintenance of slums and ultimately to make slums a moral and financial liability upon the whole community,” King asserted.

King’s full-scale assault on slum conditions was not only directed at housing. He talked about a slum economy, slum jobs, slum schools.

King historian Clayborne Carson says in today’s terms, the Campaign to End Slums would be “a campaign to end poverty.”

Carson, director of the King Research and Education Institute at Stanford University, says King’s commitment to notions of justice for the poor ran deep, and sprang from his Christianity.

“As far back as 1948, he’s writing about unemployment, slums, economic insecurity. That was his identity as a Social Gospel minister—dealing with those issues,” says Carson.

Every school child in America hears about Martin Luther King’s Dream — little black and white children joining hands. That was not King in Chicago.

“If there is to be genuine equality, there must be a radical redistribution of economic and political power,” King told the Chicago press.

The dream King talked about in Chicago included a 60 percent increase to the minimum wage. He called for a guaranteed minimum income—the idea that no family should live below a certain threshold. He wanted tenant unions, a union for the unemployed.

He imagined community organizations collectively bargaining for welfare recipients—in an effort to seek more humane policies that strengthen families. He wanted integrated schools and fair funding for black students. He called for job creation and massive investment in the ghettos.

In the South there were lunch counters. In Chicago, there were ghettos. King moved into a third-floor slum apartment in North Lawndale — 1550 South Hamlin Ave.

The day he arrived, Lawndale residents filled the street to catch a glimpse. Little kids went upstairs to see if it was really true that the Rev. Martin Luther King had moved in. Members of the Vice Lords street gang came by.

“He wanted to live with the people that he cared most about, and it was the poor people that he was most concerned about,” says Mary Lou Finley, secretary to Rev. James Bevel in 1966. Bevel had been a key strategist in Selma and Birmingham, and now he was heading the Chicago campaign.

Finley says there was an emphasis on finding and attacking structural causes of the ghetto—from low-wage work and high black unemployment rates to housing discrimination that forced too many people into too little space and allowed and encouraged landlords to exploit tenants.

Finley says activists had learned from campaigns in the South that they needed a shorthand way to quickly get their point across. So they came up with an “end the slums” symbol—it looked a little like the peace symbol but featured a ‘V,’ some said for “victory over the slums.” The activists made 10,000 buttons and gave them away.

“They really pervaded Chicago. People put the symbol in their window. After a while you didn’t have to write ‘End the Slums’ underneath it—people understood that’s what it meant,” says Finley.

(You can see a poster-sized version of the symbol displayed on a wall behind King in this 1967 interview with NBC’s Frank McGee. King tells McGee, “Now we are in a new phase, and that is a phase where we are seeking genuine equality, where we are dealing with hard economic and social issues. And it means that the job is much more difficult. It’s much easier to integrate a lunch counter than it is to guarantee an annual income. It’s much easier to integrate a bus than it is to get a program that will force the government to put billions of dollars into ending slums.”)

By the time King moved into North Lawndale, he had won the Nobel Peace Prize, he was speaking all over the country. Now, the stairwell of his building smelled like urine. The door to the street wouldn’t lock. There were rats and roaches, radiators that wouldn’t heat.

Bernard Lafayette also worked alongside King at the time. He says King was in Lawndale to both teach and listen.

“That was probably the most astute part of his approach to solving problems,” Lafayette says, “and that was to listen to the people and not make assumptions about the problem, but to see if he could understand their lives from their perspectives.”

King held “mass meetings” in little neighborhood churches. He bought the newspaper at 16th and Ridgeway.  He talked to regular Chicagoans on the airwaves, like in this excerpt from Wesley South’s “Hotline” on WVON:

CALLER: Yes, Dr. King would you object to answering a question if it were not in the same viewpoint that you have?

KING: Of course not, I’d be willing to try to answer any question--there’s always room for dissent.

CALLER: I would like to ask you if you think Chicago is the worst city that you’ve been in.

KING: Ah, that’s a difficult question to answer… because we have a lot of problems in all of our cities….

Open housing and a larger mission

If King’s stay in Chicago is remembered at all, it’s usually for the open housing marches that sought to knock down the walls of the ghettos, and the incredible violence King encountered as white residents attacked him and others protesting segregation and housing discrimination.

While King had initially vowed to unleash a “nonviolent army on each and every issue” in the slums, it proved impossible to fight on so many fronts. Eventually, open housing became the movement’s focus.

That’s one reason that today we associate King with the all-white neighborhoods he marched through—Marquette Park, Gage Park. But those open housing marches were not only a protest of racial discrimination; they were also part of a larger effort to fix slum conditions like those in North Lawndale.

‘A good thing to look up on him’ 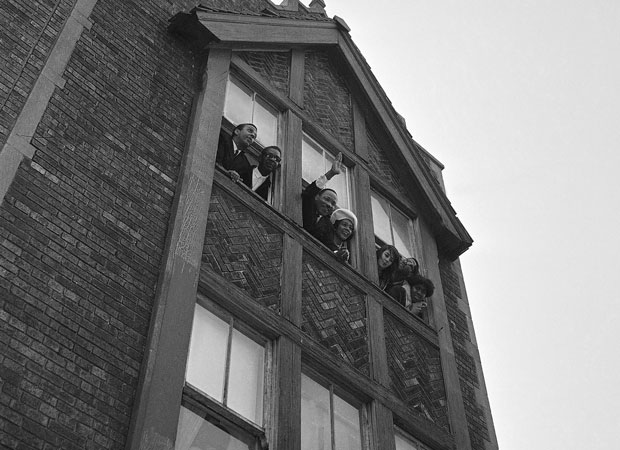 On South Hamlin, Irene Powell lives across the street from King’s old building.

She’s 87 now, and she’s sitting in the same window that she watched King through 50 years ago.

“It was just a good thing to be able to look up on him, you know? But I also heard him say that Chicago was about one of the prejudiced places he’d ever been. Even though they’re kind of sneaky with it,” she says.

Mrs. Powell’s life is a metaphor for everything achieved and not achieved over these last 50 years.

When King lived here, the Powells rented this apartment. Her husband worked in a meat packing house. She took night jobs. Somehow they caught enough of the expanding economy that they could raise 16 kids and manage to buy the building.

But it’s been tough holding onto it, between mortgage scams and city inspectors. Mrs. Powell says one of her sons was killed by police. Four generations of her children have attended the segregated school down the street.

King was here to end the slums, but to Mrs. Powell, those now look like the neighborhood’s good years.

“I just want to see more good things,” says Mrs. Powell, who still remembers the names of clerks in department stores along 16th Street that shut down long ago, remembers buying clothes and toys for her children. “I want to see some blooming up, some coming up!”

There is a little bit of blooming up. For past anniversaries of King’s arrival, 1550 S. Hamlin was a vacant lot. No sign King had ever lived there.

Today, for the 50th anniversary, Mrs. Powell looks out on the Martin Luther King Legacy Apartments. They are 45 units—some affordable housing and some market-rate — built five years ago by the Lawndale Christian Development Corporation. 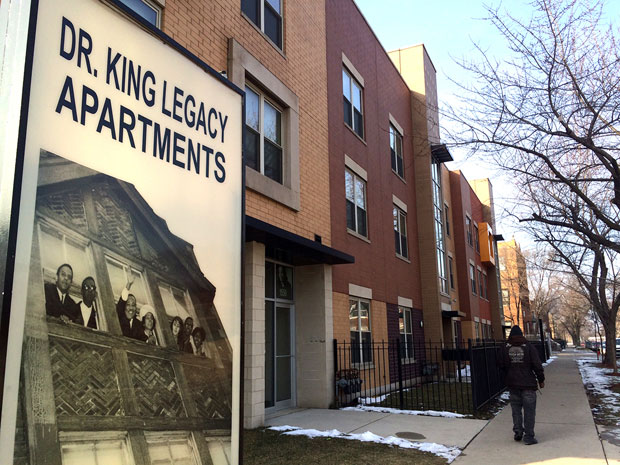 I met the family who lives at 1550 S. Hamlin, Number 3, the same address King had. They are a beautiful family, deeply religious, five kids.

I think it’s safe to say that King would love their building. But he’d be troubled by neighborhood violence so bad their kids can’t play outside. Troubled the father spent three years unemployed, despite dropping off hundreds of resumes. Troubled by the $8-an-hour job he finally landed. When you convert that $8 an hour, it’s less than what minimum wage was back in 1966.

Historians say that in Chicago, King sowed the seeds of the Poor People’s Campaign he was working on when he was assassinated.

Mrs. Powell can’t remember hearing about that. But it resonates. “It is a poor people’s campaign!  That’s what we are—poor peoples. We just ain’t campaigning!”

From her window, Mrs. Powell begins another year — looking out at many of the same problems King came to Chicago 50 years ago to fix.

Many thanks to NBC 5 Chicago and WVON for permission to use the archival footage in the audio version of this piece.

Linda Lutton is a WBEZ reporter. Follow her @WBEZeducation.