Whoever asked the question behind this Curious City story didn’t leave a name or a working email address. But I begged to investigate this question:

Does Chicago have any more privately-owned doughnut shops, and which is the best?

I had two reasons:

2.  To honor my old friend and roommate Howard Greenwich by investigating something that had always bugged him.

Howard left Chicago years ago, but I still remember his laments about the city’s doughnut situation.

So does he. “I came to Chicago in 1992, and the doughnut was my favorite guilty pleasure,” he says, from Seattle, Wash. “And I just remember, I traveled all over Chicago for my job, and everywhere I was, it was Dunkin’ Donuts, or pretty much nothing.”

Which meant, as far as Howard was concerned, pretty much no donuts worth actually eating. “If you’re going to do that much damage to your body,” he says, “it should be good.”

He was disappointed. And kind of mystified.

He had expected that a big city like Chicago would offer amazing doughnut possibilities.

So, this question is honor of Howard, because the question — Are there any independent shops left? — contains another question, a deeper mystery: What happened to all of them?

The obvious answer is: Dunkin’ Donuts killed them all.

The real answer turns out to be more complicated — and more interesting. 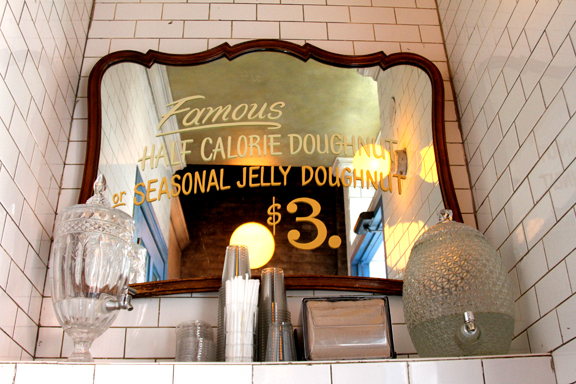 I talked with the guy who brought Dunkin’ Donuts to Chicago: Bob Rosenberg. In 1963, at age 25, he took the company over from his dad, William Rosenberg, right after graduating from Harvard Business School. (He’s like the George W. Bush of Donuts.)

And Bob had spent his last year at Harvard devising a strategy for what he would do with his dad’s business. At the time, the company had around 80 doughnut shops all over the country, a hamburger chain in the Boston area, and a bunch of commissary trucks. (Fun fact: Bill Rosenberg invented the roach coach. That was his first business.)

So, Bob got rid of everything except for Dunkin’ Donuts, and he said: Look, we’re gonna only concentrate on five cities. And we’re gonna — he used this great term with me — "fortress” those markets.

In other words, they would establish a big presence in these places to build up brand awareness, and to get efficiencies in distribution and support. Plus, all the stores would kick into a kitty so they could advertise. They would build up a fortress in the battle against their competitors.

“That's where people stop for ‘coffee-and’ in the morning, so that’s who our competitors were,” says Rosenberg. “And quite truthfully, I had no idea how many doughnut shops there might have been.”

The doughnut business, he says, is a much tougher racket than the coffee business.

“Doughnuts are consumed maybe on a special occasion by the consumer,” he says. “Maybe once every two or three weeks they go to a doughnut shop? Whereas, with coffee, your heavy users are buying it two or three times a day. It's a whole different business.”

These days, Dunkin’s coffee-centricity is all out front. In the 1990s the company dumped the mascot it had been using in TV commercials for 15 years — a droopy, early-rising guy called Fred the Baker.

Later, the company adopted a slogan that reflects the company’s role as a caffeine peddler: America runs on Dunkin.

But even back when Bob Rosenberg brought Dunkin' Donuts to Chicago in 1965 — years before Fred the Baker went on TV — coffee already represented 60 percent of Dunkin' Donuts sales in its home markets.

Which was no accident.

“We were very fastidious about how we made our coffee,” says Rosenberg. “Where it was grown, how it was roasted, how much coffee per pot, the fact that we used real cream when nobody else could get it in the United States. Most dairies didn’t make 18 percent light cream. I mean, we were slavish in the attention we paid to our beverages.”

Also: They tossed out the coffee every 18 minutes, instead of letting it sit on the burner. 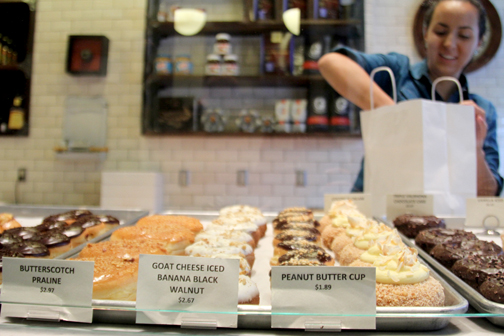 His first big hit was coffee. And he charged twice as much for coffee as the next guy — a dime instead of a nickel.

But it was a much, much better cup of coffee. At the time, the only place to get a really good cup of coffee was a fancy hotel. Bill Rosenberg called the company that supplied the fancy hotels and said he wanted the same stuff. A lot of it.

He had his workers offer the coffee for free. If customers didn’t think it was worth a dime, they didn’t have to pay anything. But they did pay the dimes, and they came back the next day for more.

And Dunkin’ Donuts didn’t take out other donut shops in head-to-head competition. Dunkin was actually in a different, more-profitable business: coffee.

But still, what happened to all of those doughnut shops? How many did there used to be?

To find out, I went to the Chicago Public Library’s Special Collections room to look in the Yellow Pages — from 1963 — two years before Dunkin' Donuts came to Chicago. 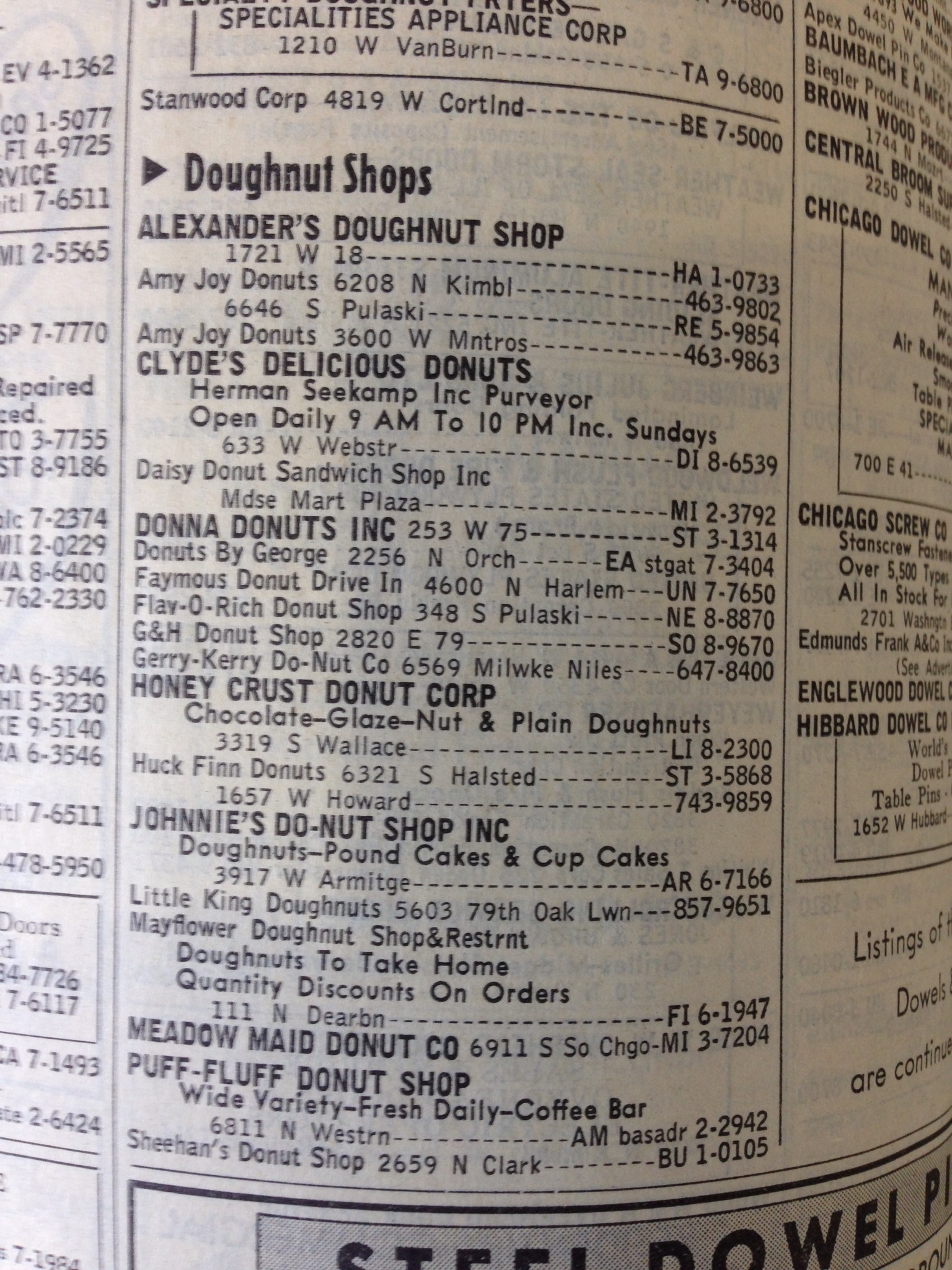 And you know how many there were? 20.

In a city the size of Chicago, there were only 20 doughnut shops. (There were also tons and tons of bakeries, but still.)

None of them is a Dunkin’ Donuts. Only one is a Krispy Kreme.

So, LA has more than seven times as many locally-owned doughnut shops today as Chicago had in 1963.

Why? Well, in 1963, when Bob Rosenberg took over Dunkin’ Donuts, he made a cross-country trip to scope out potential markets. And California looked terrifying.

“There were thousands and thousands of existing competitors,” he says. “There were coffee shops everywhere,” plus an existing regional doughnut-and-coffee chain called Winchells. They were big at the time.

So when he picked five cities to “fortress,” LA and San Francisco were off the list. Fifty years later, Dunkin’ Donuts is making news in LA with an attempt to crack that market. In 2013.

What is the deal? Why all the mom-and-pop donut action in LA?

I’ve encountered a couple of theories. For instance, Paul Mullins, author of Glazed America: A History of the Doughnut, chalks it up to LA’s “car culture,” which made doughnut stands a natural, since they’d sell something you could eat behind the wheel.

… But we’re getting far afield. What was our original question again?

In the city proper there are more than half a dozen, including Dat Donut, Huck Finn, Donut Doctor, and four artisan-style, two-bucks-and-up-a-pop, doughnuts-are-the-new-cupcakes type shops in and around the Loop: Firecakes, The Doughnut Vault, Do-Rite Donuts, and Glazed and Infused. Plus a food truck called Beavers Coffee + Donuts.

(Really, Beavers does something that’s halfway between a doughnut hole and a beignet, but they’ve got Donut in the name.)

And then there’s the best: Old Fashioned Donuts in Roseland, at 112th and Michigan. If you haven’t already looked at Logan Jaffe’s video of our Epic Doughnut Quest, you might want to scroll up and do that now. 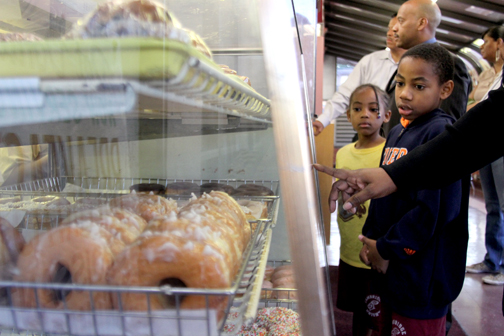 Big picture windows show off the fryer, the rolling pin, and the donuts being made by hand.  Specifically, the hand of owner Buritt Bulloch, who opened the shop in 1972.

Bulloch sees the story of doughnuts in Chicago very much the way Bob Rosenberg does. He doesn’t really know what happened to the other doughnut shops, but he does know that Dunkin isn’t his competition. They’re about sandwiches and coffee.

“They keep a few doughnuts on the shelf, just to bear the name doughnut ,” he says, laughing. “But we move quite a bit of product here.”

They do. There’s always a line.

“People ask me, ‘Why don’t you expand? Why don’t you franchise?’ I really came here just to make a living,” he says. “I love the work, so I just kinda hung with this.

At 74 years old, he plans to keep hanging with it for another decade.

So, you’re on notice: If you want the best doughnut in Chicago, you’ve got about ten years to get yourself to 112th and Michigan.

Meanwhile, for more fun details on the growth of Dunkin’ Donuts, Boston Magazine did an oral history of the company that’s packed with great facts and quotes. There’s also founder William Rosenberg’s autobiography, Time to Make the Donuts, in which he discusses his eventual disillusionment with his son Bob’s approach to running the company.

Final footnote: You’ll notice that most of the shops mentioned in this story use the spelling “donut,” where we’ve used “doughnut” here. Thank the Associated Press Stylebook for making us the odd one out.

Dan Weissmann is an independent producer in Chicago. See more of his stuff at danweissmann.com and follow him @danweissmann.