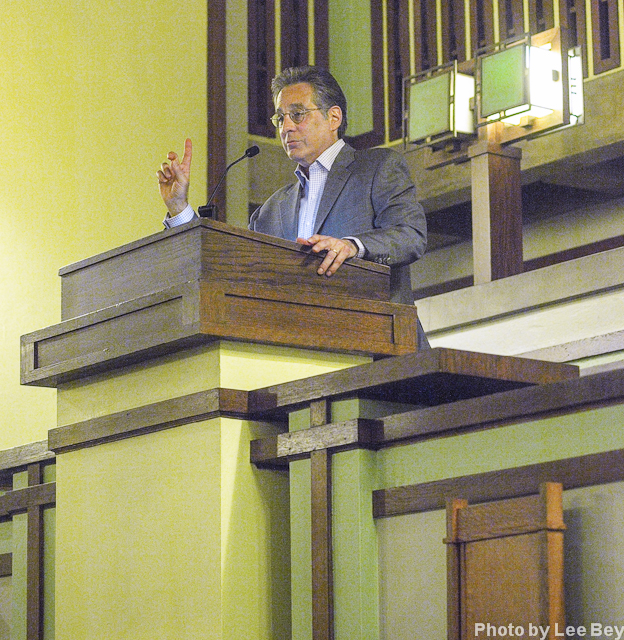 "Besides being my generation's biggest Beatles fan, I happen to be a true Frank Lloyd Wright nerd — I mean 'aficionado,'" Weinberg told a group of about 150 people assembled in the auditorium of the Wright-designed church at 875 Lake St. last Thursday.

Weinberg's lecture was part of the "Break the Box" series of distinguished speakers, sponsored by the Unity Temple Restoration Foundation.

The New Jersey native said he has been a devotee of the architect since childhood, when a relative allowed him to visit the Wright-designed Guggenheim Museum in New York while the modernist masterpiece was still under construction. As a teenager, he'd search out Prairie School architecture with his high school buddy and future film producer (and fellow Wright devotee), Joel Silver.

Weinberg said traveling with the E Street Band allowed him to visit Wright homes in buildings across the country. When the band came to Chicago in 1977 to play the Auditorium Theater, Weinberg said he arrived equipped with a map he annotated with the location of Wright buildings.

"Back in the 1970s when the E Street Band was starting out, my recreation was to seek out — some might say 'stalk' — owners with homes designed by Mr. Wright," he said. "I would knock on the door and introduce myself: 'My name is Max Weinberg and I'm with the E Street Band.' And I could tell by these folks, they'd never heard of the E Street Band." 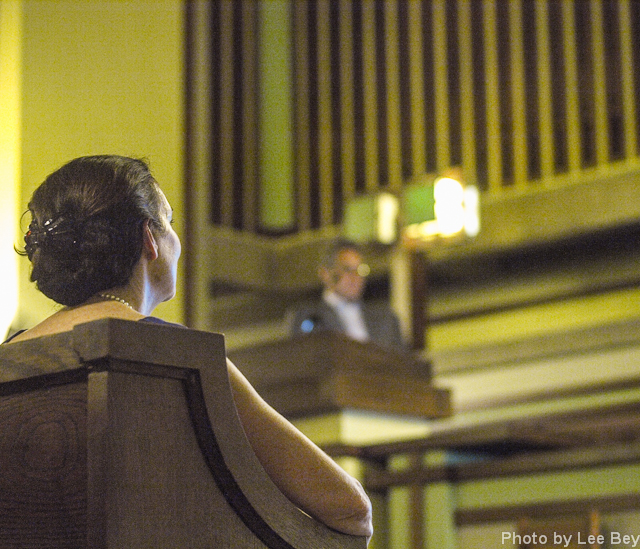 Weinberg said he is active in the Wright preservation movement and talked about the need to restore Wright's famed Unity Temple, a blocky, 103-year-old structure that is among the first public buildings in the world made of exposed concrete. Though a functioning and nicely-maintained Unitarian church since it opened in 1909, the building has been damaged by water seepage, wear and time. In 2009, the National Trust for Historic Preservation named Unity Temple to its 11 Most Endangered Historic Places list. 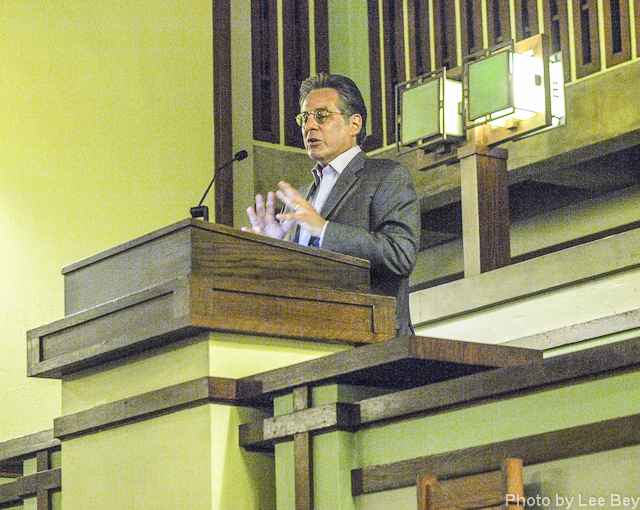 During his talk, Weinberg also shared some good non-architecture stories, such as playing on Meat Loaf's landmark 1977 album Bat Out of Hell along with E Street keyboard man, "Professor" Roy Bittan. Weinberg said he played on three of the album's songs, including the title track and "Paradise by the Dashboard Light" — then was fired from the project by producer (and friend) Todd Rundgren.