It’s a situation that plays out every day in Chicago. Riders show up at a bus stop, and the bus doesn't show up on time. Then all at once, two appear together.

The phenomenon is called bus bunching. Corrin Pitluck noticed it often while riding and driving around Chicago, so she put this question to Curious City:

I’m interested to know about the urban physics involved in bus bunching, how it happens. I’d also like to get drivers’ perspectives on how they feel about it and how they deal with it and what tools they have to unbunch their buses.

Most CTA bus riders have been frustrated by bunching at least once, but it’s not just a problem for them. Bunching is a symptom of a bus system that’s not running efficiently, and that creates more street traffic for everyone: bus riders, car drivers and bikers, too.

And don’t be fooled that bunching is simple to combat. Not only is the problem practically inevitable, short-term fixes can sometimes make bus riders feel worse.

We watched bus bunching play out on a recent weekday morning at the 66 Chicago bus stop at Chicago and Milwaukee avenues.

Passengers getting off the Blue Line at Chicago waited for buses downtown, while bus riders worked to get off and board the “L.” Both groups converged at the bus stop, leaving bus drivers to wait while each got where they were headed.

Meanwhile, three 66 Chicago buses all rolled east down Chicago toward the stop together.

“Oh, don’t get me started,” Matt Zachar said while waiting for a bus to arrive. “It is inconceivable. I don’t understand why one can’t just wait and be on schedule like he’s supposed to.”

That’s not always the case, though, according to University of Chicago Professor Donald Eisenstein.

Eisenstein studies self-organizing systems, like workers in a production line. As a system, buses by design are set up to bunch.

“A bus system by nature has bad dynamics,” Eisenstein said. “Left on its own, buses will bunch.”

Big gaps between buses, he said, will get bigger, while small gaps will shrink. This reality makes it almost impossible to eliminate bunching on a route unless there’s a lot of time between buses.

“Zero isn’t a possibility,” he said. “The natural dynamics fight against you. I don’t think you’ll ever get zero bus bunching, so your goal is to reduce it as much as possible.”

Click here for a full screen and shareable version

'At the mercy of the street'

Mike Connelly, the CTA’s vice president of planning, said bus bunching isn’t a major issue for the agency. According to CTA performance metrics, only around 3 percent of bus trips experience bunching, which the agency defines as a gap of less than 60 seconds between buses at a stop.

Of course that percentage is greater during morning and evening commutes, as well as along the busiest routes. Still, for Connelly, bus bunching is a smaller part of making sure the buses are on time and consistent.

“Though everyone may be affected at some point, we feel that it’s something we work at and that we have a very high standard for [being] unbunched,” Connelly said.

The main way the CTA tries to combat bunching is scheduling. Each bus is equipped with a GPS tracker, and four times a year the CTA analyses the data to see if there’s a more efficient way to run the buses.

Next, buses are monitored and controlled at key spots on the route, called terminal points. A street supervisor can speed up or hold a bus back to make sure it leaves that point on time and with enough space between it and the bus in front.

From there, “we’re at the mercy of the street,” Connelly said. There are a few go-to methods, but each comes with a cost: financial costs to the CTA or potential to frustrate bus riders.

The CTA’s job is complicated by us, the riders, who need to go to a specific point and in a predictable way, so buses can’t always go the fastest or easiest way possible.

“For us, the bottom line is that we carry people, so the people have to be our bottom-line,” Connelly said. “If we were UPS, where you load the boxes and we go, we could make a choice not to deliver down this street at 9 a.m., because there is something going on this street and we could come back at 2 in the afternoon. That’s not our choice. Our choice is that there are people waiting at the stop and we’re going to go pick them up.”

While bunching can be an annoyance for riders, it’s even more stressful for the drivers themselves.

Michael Toomey is an 11-year CTA veteran and current bus operator on the 77 Belmont route. He said the main thing he wished customers understood was how the smallest disturbances on the street can lead to big delays on his route.

“[It’s] minor factors most people wouldn’t notice, like a double parked car that I get stuck behind and the bus behind me comes straight through,” Toomey said. “So if I become two minutes late on a route that runs every four minutes, that’s the same as being 15 minutes late on a route that runs every 30 minutes. I get more stress knowing I’m two minutes behind schedule and the next bus is scheduled four minutes back, which means I’ve got twice as many people to pick up.”

Drivers can do a few things on their own to stop bus bunching, such as leapfrogging the driver in front of them or skipping unneeded stops. On larger problems they coordinate moves with the control center and street supervisors.

“If I see my coworker in front of me, he has a standing load, I pull up and say ‘Come on, you guys. I’ve got room’ and we work together,” Toomey said.

Though Toomey can spot many bunches starting — he knows how much time an extra load from the Belmont ‘L’ stop will add, for example — he sometimes gets as mystified as riders.

“Some days it’s wide open, the next it’s bumper to bumper stopped,” he said. “That’s something we as operators ask, too. We’re throwing our hands up, expecting something major, and there’s not.”

Toomey said he wished customers could see the bunching and delays from his eyes, as a problem they share.

“I rode the bus for years, so I’ve seen both sides,” he said. “I wish more people had the opportunities to experience it firsthand, because if people could actually see what was happening behind the scenes they’d be more understanding.” 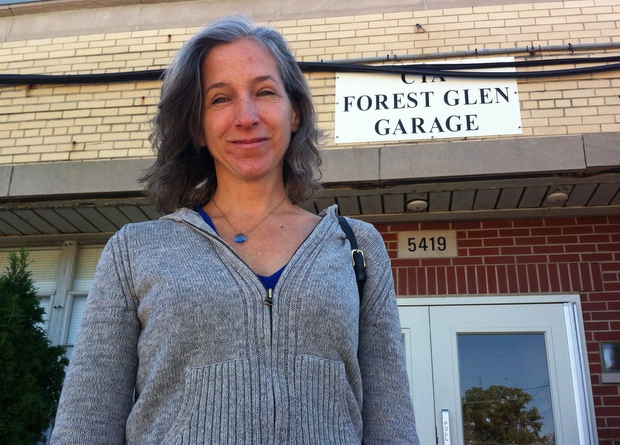 Our question-asker, Corrin Pitluck, takes a lot of trips from her Logan Square home with her kids, heading to school or visiting friends. Both as a CTA bus rider and a car driver, she’s been fascinated by bus bunching.

“I might be waiting for a bus and it’s clear two buses are coming up, or might be driving and making a right turn and trying to be a good citizen and not turn in front of a bus, but waiting back there a ways behind a queue of buses,” Pitluck said.

Growing up in New Jersey and Southern California, she’s seen lots of different types of public transportation, and she’s seen how easy it is for a bunch to form.

“I have wondered and shook my fist at this bunching problem for decades now.”

We love that she took this empathic element so seriously. It prompted us to speak with driver Michael Toomey and convey the gist to her.

She was just as shocked as we were when Toomey told a story of a seven-bus bunch he was involved in early in his career at the intersection of Cicero and Chicago. Utility work and an accident shut down all but one lane, and it took him more than a half hour to go one block.

Pitluck said the experience helped her understand the position of drivers and the difficulties they face on the road.

“There’s a lot that’s out of their hands,” she said. “They have some tools but they’re kind of limited in dealing with this ... that buses bunch.”

Chris Hagan is a web producer and data reporter at WBEZ. Find him on twitter @chrishagan.