When my daughter started pleading on the phone, I was adamant and firm: She could absolutely not bring home a bunny from the farm where she was staying.

But 15 minutes later, I found myself saying, “OK fine we’ll keep them for a trial period.”

That was last August — now every morning we wake up early to feed our little black and white furball named Binky. He gets to eat fresh, thoroughly washed organic greens long before we make our own eggs and coffee. We have a 50-pound box of timothy hay on the porch and we’ve placed bunny litter boxes all over the house.

In short, my home has become bunnytown and I am its No. 1 public servant. Parents who are thinking of buying their kids a cuddly little bunny for Easter, might want to think twice.

“Speaking personally I have a dog, a cat and three rabbits, and the rabbits are definitely the most high maintenance,” says Marcia Coburn, president of the Red Door Animal Shelter in Rogers Park. “They have to have hay, they have to have freedom to run around, yet you have to do bunny-proofing, just like child-proofing in your home. You have to protect your electrical cords because they will chew through them. You have to find an exotics veterinarian because they can’t really be seen by a dog or a cat vet.”

I only became aware of these things after we got our bunny, and after I hopped on the many rabbit care websites. Here’s what I learned:

Oh and P.S., they also live for about 10 years. So we expect to be caring for them long after the the kids leave for college.

That’s just one of the reasons abandoned rabbits are expected to flood places like Red Door Animal Shelter in a few weeks.

“The people who buy them at Easter end up saying, ‘Well, what am I doing with this? This isn’t what I thought it would be,’” Coburn said. “And then they end up dumping them outside and Red Door ends up rescuing about 50 rabbits a year.”

Although the U.S. Department of Agriculture says that annual pet rabbit sales numbers are unknown, it notes that rabbit breeders “usually supply young small rabbits to satisfy customer demand and may see a seasonal increase in demand for rabbits at Easter. “

According to the American Society of the Prevention of Cruelty to Animals “Thousands of ex-Easter bunnies are abandoned to shelters or into the wild each year when their novelty wears off.”

Some groups have also pushed for a ban on rabbit and chick sales in the weeks leading up to Easter and a few independent pet stores have voluntarily agreed to do so.

But for those who do purchase rabbits, another challenge is finding companions for them. Researchers say bunnies get angry and depressed when they're in single-rabbit homes. But they're actually pretty particular about their pals, which is why experts recommend choosing a new bunny mate through a series of speed dates at places like Red Door.

Most will do best with a bunny of the opposite sex, explained Red Door Vice President Toni Greetis, “but occasionally two boys will get along just fine. Still, we’ll never introduce two girls because they’re very territorial and can fight.” 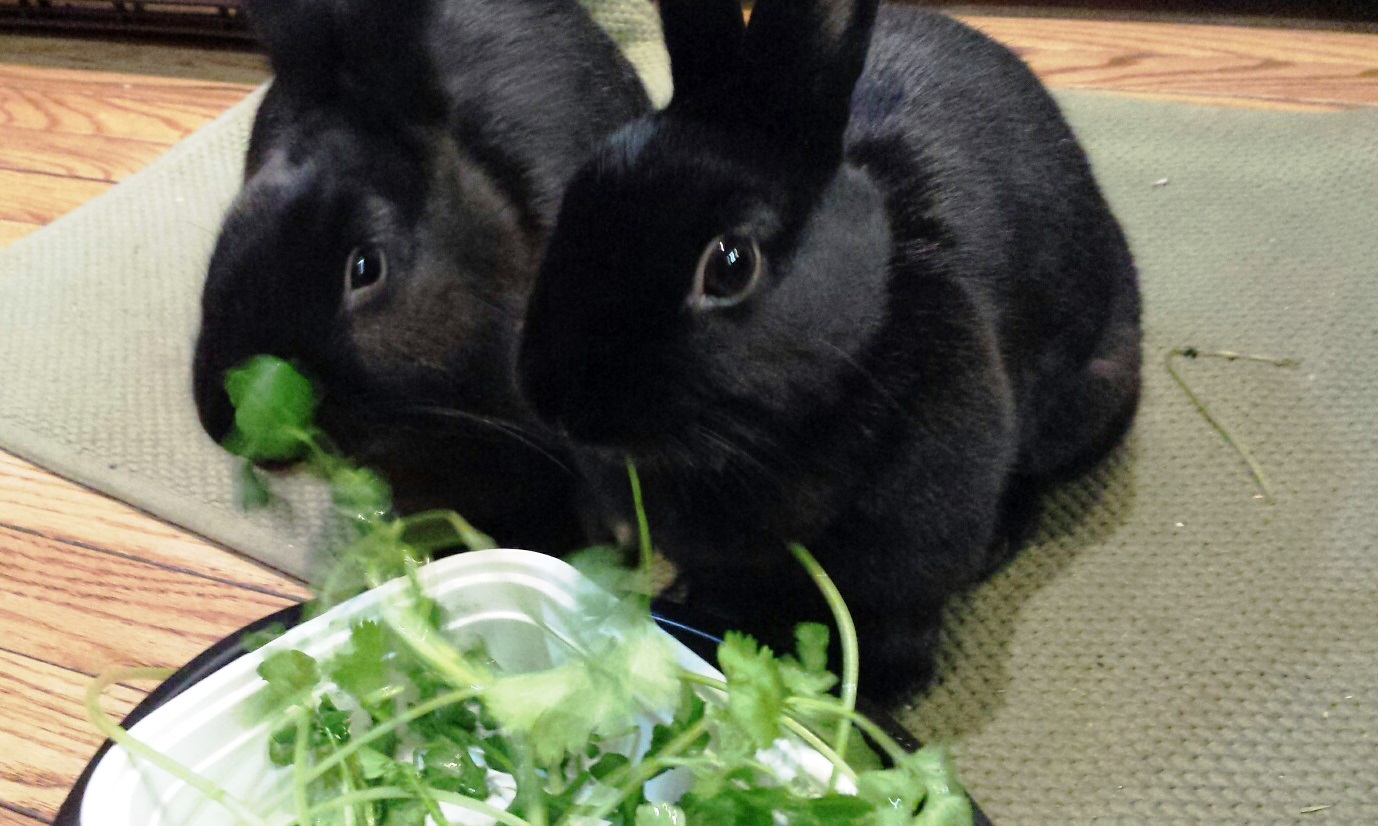 Some rabbits need several dating sessions with numerous candidates. But Binky was lucky to fall in love with a dainty little black rabbit called Brooklyn on his first date. We then needed to take them home for a series of bonding sessions, which consisted of peeing to mark territory and mounting each other.

“Rabbits will mount each other regardless of whether or not they are fixed in order to determine dominance,” Greetis says. “Sometimes it’s the female who will mount the male, but what we are looking for is certain body language. Is the bunny that’s on the bottom tolerating being mounted? That’s a good sign.”

If you want to know how our bonding sessions went, all you need to know is that the demure little rabbit that we used to call Brooklyn, is now named Queenie.

We’ve had to get used to a lot of things, like having rabbit litter boxes around the house. We can’t leave town without finding trained rabbit sitters.  And we have accepted that our wood work and furniture are going to be full of chew marks.

For fun, sometimes we watch a series of videos by comedian Amy Sedaris on things like how to massage your bunny.

If this doesn’t sound like a great time, you may want to stick with chocolate bunnies this Easter.

But us? At this point we wouldn’t have it any other way.

Monica Eng is a WBEZ producer and co-host of the Chewing The Fat podcast. Follow her at@monicaeng or write to her at meng@wbez.org