Legal segregation may be over in Chicago, but racial isolation is well documented in Chicago Public Schools.

CPS can no longer use race as an admittance factor and more and more students are eschewing their neighborhood schools for other options. Education watchers argue there’s a two-tier system in the district, and that attracting middle-class families is a Sisyphean task.

Our segregated school system compelled the following Curious City question from a woman who wanted to remain anonymous:

Well, the short answer is 51 percent... according to the Census.

So roughly half of all white children who could go to CPS do, while the other half gets their education somewhere else. By comparison, the number of African-American school-age children who attend CPS is higher than 80 percent.

Part of this can be explained by a huge gap in the total number of eligible students based on race. More on that later, but first, let’s take a closer look at how white parents decide where to send their kids to school.

Where should our kids go to school?

Of course, choosing where to enroll your child in school is an intense and private family decision. Some parents want their children to get a religious education, others want better resources, and sometimes where to go to school is simply a matter of logistics.

Alice DuBose lives in Andersonville and says she never had a problem with the neighborhood public school. But she did have a problem with its location relative to her job.

“I could drop the kids off in the morning and go on to work and it was really great when I was working here because then I could just go over and see my daughters, participate in classroom activities to it was absolutely fantastic in that way," DuBose said. "It was more convenient. If we had gone to a neighborhood school, I could’ve never participated in classroom activities."

It also didn’t hurt that Laboratory is a well-regarded private school with lots of resources. Mayor Rahm Emanuel’s children go there.

“Lab’s terrific,” DuBose continued. “Great teaching, smaller classrooms. All the things that we all want for our children.”

DuBose’s daughters attended there until 8th grade and then went on to attend Whitney Young – a CPS selective enrollment school. Now DuBose hopes her son follows in their footsteps.

The reality is many middle-class parents, including those not initially in CPS, jockey to get their children in selective public high schools like Whitney Young.

Not far from Lab in Hyde Park, is a white family who was committed to CPS from the very beginning. 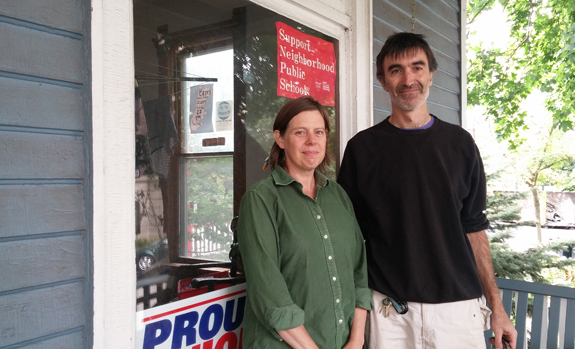 Joy Clendenning and Michael Scott live in Hyde Park. They didn’t choose the neighborhood because of the schools. Scott grew up there and has strong family ties and Clendenning loves the quirky intellectualism of the area. The couple say they believe in public education and always knew their children would attend CPS. A sign in their window says ‘Support Neighborhood Public Schools.’

All four of their children attended Ray Elementary through sixth grade. The oldest went to Kenwood Academy’s 7th and 8th grade academic center and stayed for high school. He’s now a freshman at Occidental College. The second oldest is a sophomore at Whitney Young and started in its academic center. Their twins are currently in 8th grade at Kenwood.

“Kenwood was a very good place for Sam and we never thought 'this was too black,'” Scott said.

Clendenning says they're concerned about how many schools and neighborhoods are segregated.

"And we definitely think it’s a problem that people in our neighborhood don’t give the public schools a serious try," she added. 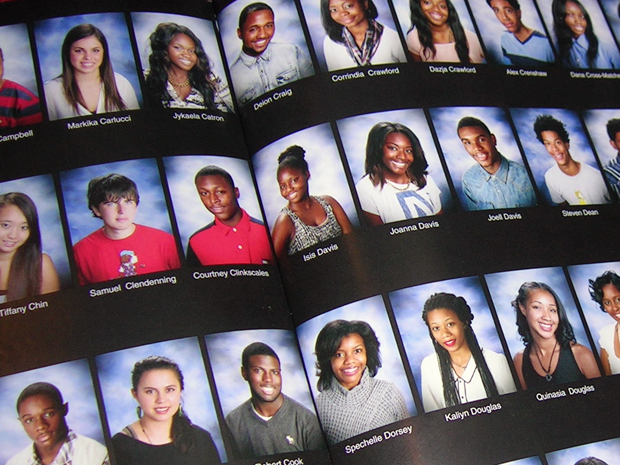 Our Curious City question asker – who again wants to remain anonymous – raised a similar point in a follow-up email:

I asked this question because I've noticed in my small sampling of visiting public schools, other than a few of the magnet schools, it seems that we have a segregated school system along race lines.

We know Chicago is almost equal parts black, Latino and white, but that’s not the case when it comes to the city’s youth. So while roughly a third of Chicago’s total population is white, most of those numbers skew older. That means there aren’t that many white school-age children to begin with. 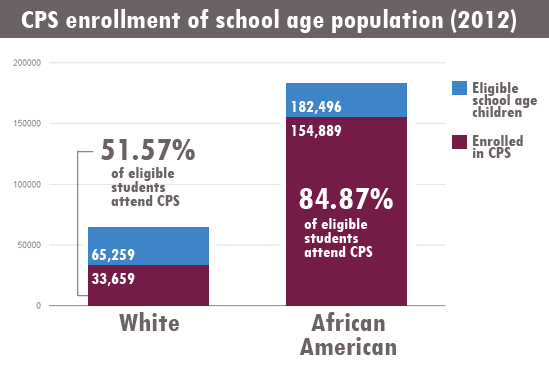 Why does any of this matter?

“Honestly, when you look at the data, it’s very disturbing,” Elaine Allensworth told WBEZ. Allensworth is the director of the Consortium on Chicago School Research at the University of Chicago.

“Because I do think we think of ourselves as a multi-ethnic city, a city of racial diversity. But then when you look at the numbers and you see how many schools are one-race schools and how segregated schools are based on race, I don’t think that’s where we want to be as a society," she said.

Segregation is made worse by the low number of white students overall.

“We have a lot of neighborhoods in the city that are 90 percent or more African American or less than 10 percent African American. In fact, the vast majority of the city has that degree of racial segregation,” Allensworth said.

In other words, if we don’t live together, we don’t tend to learn together. 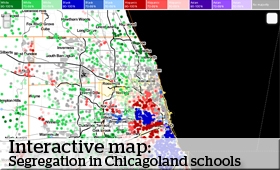 Take Mt. Greenwood, for example, on the Southwest Side. 82 percent of the student body is white – the highest percentage in all of CPS. And that makes sense. Mt. Greenwood, the neighborhood, is a majority white community.

The same holds true for many majority black communities.

As a result, the schools that serve the neighborhoods are also highly segregated based on race,” Allensworth continued. “So we have many many schools in the district that are close to 100 percent African American.”

Those poor-performing schools are typically in poor, black communities that are suffering from substantial unemployment and lack of resources.

“When we look at which schools are struggling the most, they are in the absolutely poorest neighborhoods in the city.  We’re talking about economic segregation,” Allensworth said.“There are other schools in affluent African-American communities that do not face the same kind of problems.”

Segregated schools have always been an issue in Chicago, but it looked different back in the day.

In the 1960s, CPS’s student body was roughly 50 percent white and 50 percent black. Over time white students in the district steadily disappeared. Many neighborhoods transitioned from white to black. Depopulation also played a role.

WBEZ asked CPS officials to weigh in on these numbers. They failed to address the segregation issue and emailed some boilerplate language about “serving a diverse population.” 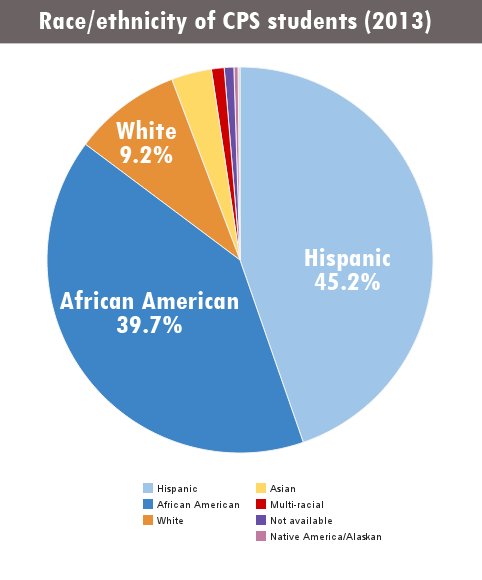 Where are the white students in CPS?

Again, we know half of white school-age children in Chicago attend CPS. But the question of where they go in CPS is also something that piqued the curiosity of our question asker.

She wondered if they are disproportionately attending magnet and other selective enrollment schools.

The answer appears to be, yes.

Overall, 9 percent of the CPS student population is white. But it’s more than double that at magnet, gifted and classical elementary schools. And in the eight selective enrollment high schools – like Whitney Young – nearly a quarter of students are white.

“It’s a very small number of students though because those schools don’t serve a large number of students,” according to Elaine Allensworth. “We really haven’t seen that much of a shift in terms of attracting more white students [overall].”

Although our question asker focused on white students, there’s another racial shift worth mentioning.

Beyond black and white, the real story of CPS today may be that it’s becoming more Latino.

Correction: An earlier version of this story misstated the requirements for attending Ray Elementary. It is a neighborhood school that accepts students outside its attendance boundaries through a lottery, not testing.