Like many residents of Tri-Taylor, Dorota Gosztyła hopes her Chicago neighborhood will finally figure out what to do with two city blocks of brick and terra cotta rising up from Harrison Street.

“I find the building to be beautiful, and I think it’s a shame that it’s just standing here vacant,” says Gosztyła, 35. She often glimpses the old Cook County Hospital building while driving on the Eisenhower Expressway (I-290). The hospital’s fluted columns soar three stories, lining a facade festooned with classical symbols: cupids, lions, warriors’ shields.

“When you get a closer look it’s a little different. It’s definitely run-down. ‘Neglected’ I would say is the perfect word to describe it,” Gosztyła says. “It’s pretty sad.”

It bothered her enough that she sent Curious City a succinct question about the building that could play a future in her neighborhood:

What will become of the old (and now vacant) Cook County Hospital?

The building, 1835 W. Harrison St., is hard to miss. When it opened in 1914, it had space for 650 patients. Subsequent expansions made it the world’s largest medical facility from the 1920s until the 1950s. Among the superlatives it racked up during that time: It was home to the world’s first blood bank; Chicago’s first HIV/AIDS clinic in 1983; the site of the country's first dedicated trauma center; and in 1973 Dr. Boone Chunprapah became the first doctor to successfully reconnect four severed fingers to a patient’s hand.

While its architectural significance has never been in doubt, the aging structure isn’t a sure bet for rehabilitation. New construction now surrounds the site, and it wouldn’t be the first time Chicago has demolished a historic building in the name of progress. Gosztyła’s question got us talking with people who know the building’s history and its potential for redevelopment. The bottom line is that preservationists and county officials seem to agree on this: The building can and should be saved. What remains unclear, however, is just how to do that.

A landmark on life support

Before it made medical history, Cook County Hospital was an architectural achievement.

“It is a terra cotta marvel. The building is enormous, at the same time as being very elegant,” says Bonnie McDonald, president of Landmarks Illinois. “The mix of brick and terra cotta create a really lovely façade.”

Architect Paul Gerhardt, who designed the building in association with Richard E. Schmidt and Hugh Garden, was known nationally for his hospital designs. Gerhardt also designed Christ’s Hospital in Topeka, Kan., as well as Chicago’s Michael Reese Hospital. Cook County Hospital is one of the city’s best and largest-scale examples of Beaux Arts architecture. 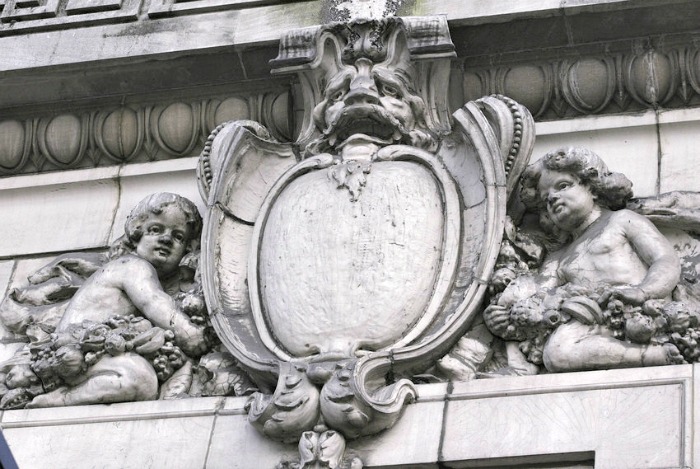 Landmarks Illinois’ reuse plan for the building makes note of its mansard roof, made with green glazed terra cotta, and other ornamental details. But it also calls attention to the steel frame; the widely spaced columns preserve an open floorplan conducive to reuse. The preservation group’s analysis called for turning the building into 320 residential units for medical staff, a 95,000 square foot health and wellness center, ground-floor commercial space, and 150 parking spaces.

“Think about a historic building as a space to accommodate whatever need there is in the neighborhood, because they are highly mutable,” McDonald said. “You’re able to oftentimes take a modern use and put it into a historic building.”

Their recommendation changed slightly when the county demolished the building’s three southern wings in 2008 (they were not original to the building, but still considered a loss by preservationists). Like another study commissioned by the county, they recommended repurposing the building primarily as office space. While the studies concluded modern medical equipment would be too heavy for the building’s aging floors, they didn’t rule out reuse as a hotel, dormitory, rental housing, senior housing, or educational space.

“Our first and primary goal is to preserve the building,” says John Cooke, the County’s director of capital planning and policy. But that wasn’t always the case. Under Cook County Board President John Stroger’s administration, the building’s future seemed in doubt. The building closed in 2002, and Stroger called for its demolition while a new hospital bearing his name went up next door. Preservationists and several board members fought the demolition idea, and in 2006 the building landed on the National Register of Historic Places. Four years later the board voted to preserve the old Cook County Hospital building.

Until the building is actually occupied again, its future remains uncertain. Cook County officials are waiting for U.S. Equities Realty to recommend future uses and repairs for a slew of county-owned buildings, including the old hospital. Cooke says once the company’s report is in, the county will issue a request for proposals to solicit interest from architects and developers — likely in the spring of 2014. 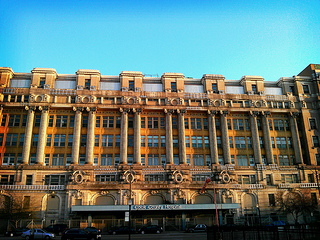 The two-block long building could be subdivided into three 185-foot sections for phased development, making it less risky from a financial standpoint. And while the county isn’t going to sell the site, Cooke says, it’s investigating lease arrangements to encourage private development. That could mean a ground lease, whereby the county sets out what uses and spaces it wants; and a developer pays for improvements to the building, provides said space, and pays an annual fee to the county.

A Jones Lang LaSalle reuse study puts the cost of reusing the building between $103.9 million and $120 million depending on its use. That could be reduced by as much as $50 million through the use of Tax Increment Financing (TIF) funds from the Central West district, the study says. Historical preservation tax credits could also offset 20 percent of the total project cost. By contrast, demolition could cost as much as $13.6 million, in addition to the cost of new construction.

Is that enough to entice developers? Cooke said the County will find out in 2014. But preservationists are eager to see the mothballed building get another chance at reuse.

“The public cares about what is happening to this important resource,” McDonald says. “So the sooner that we do something, the more we’re going to help the community.”

How daunting can it be?

Now the question is how (not whether) to resuscitate the building.

Though its presence can be imposing to passersby (including our question-asker, Dorota Gosztyła), the old hospital building isn’t too intimidating to architects who specialize in adaptive reuse. 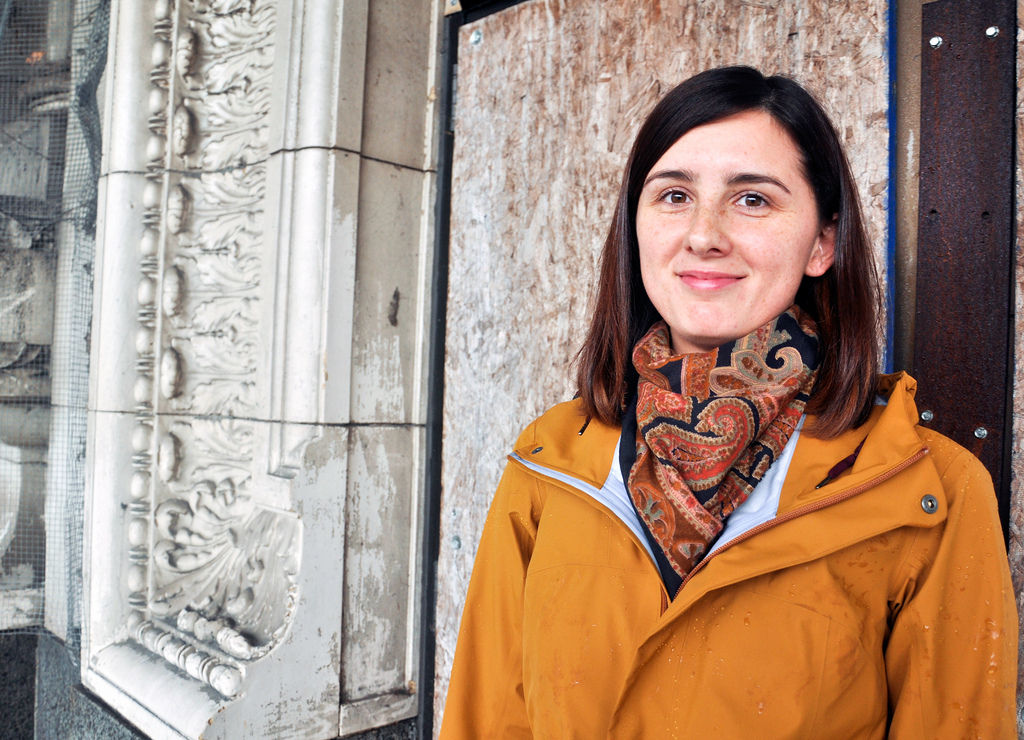 Joe Antunovich, president of Antunovich Associates, has tackled many such projects. His firm’s own office, 224 W. Huron St., occupies the top two floors of a brick building more than 90 years old. In Pittsburgh, the company transformed the dilapidated Armstrong Cork Factory along the Allegheny River into 385 apartments.

“There used to be trees growing out of the windows there. Now, after an adaptive reuse, bringing that beautiful building back, we have 385 apartments there, and now they’re the most sought-after apartments in downtown Pittsburgh” Antunovich says. “So don’t tell me that these buildings can’t be brought back.”

As for Cook County’s old hospital building, he says office space is a strong possibility.

“The old nurses’ quarters, this old decrepit building, houses the current administration for the state-of-the-art Cook County Hospital system. So if you just swapped that out and cleaned up the old building,” Antunovich says, “you could have a marvelous front door of the entire Cook County administration.”

Antunovich and others hope any development will celebrate the hospital’s history. Gosztyła, our Curious City questioner, suggests a museum dedicated to that purpose. McDonald, of Landmarks Illinois, suggested that a mobile app could spout historical facts to interested visitors.

One candidate for inclusion is a reference to the old Cook County hospital’s role as “Chicago’s Ellis Island.” A quote from Louis Pasteur is inscribed on a hospital wall, evidence of its reputation for welcoming immigrants: “One doesn’t ask of one who suffers: What is your country and what is your religion? One merely says, You suffer. That is enough for me. You belong to me and I shall help you.”

By spring of next year, Gosztyła and others who wonder about the future of the building could have their answer. It might bring new meaning to those words, “I shall help you.”

Chris Bentley is a reporter for WBEZ’s Curious City. Follow him at @cementley.