Remember that last scene in Raiders of the Lost Ark where they box up the ark of the covenant and store it in a big old warehouse?

Well the N.W. Harris Learning Collection room at the Field Museum is a lot like that warehouse, except regular folks can walk out with some of the 1,500 artifacts stored there. These rentable items include a replica of a full-sized T-rex skull, bug specimens, hundreds of stuffed birds and animals, ancient instruments, and even fake bear feces.

Curious City recently stumbled across this more-than-100-year-old collection while researching a question from listener Robert K. Elder. We learned that the Field Museum’s program began as a resource for Chicago teachers to bring educational displays to their students.

But the Field Museum eventually opened its rental collection to the general public. Regular citizens can take home almost any item through rental plans that range from $10 for one item to $100 for 40.

The collection’s administrator, Wendy Quinlan, recently gave us a tour with Robert and his 9-year-old daughter, Eva, and we came up with this list of some of the more notable items. 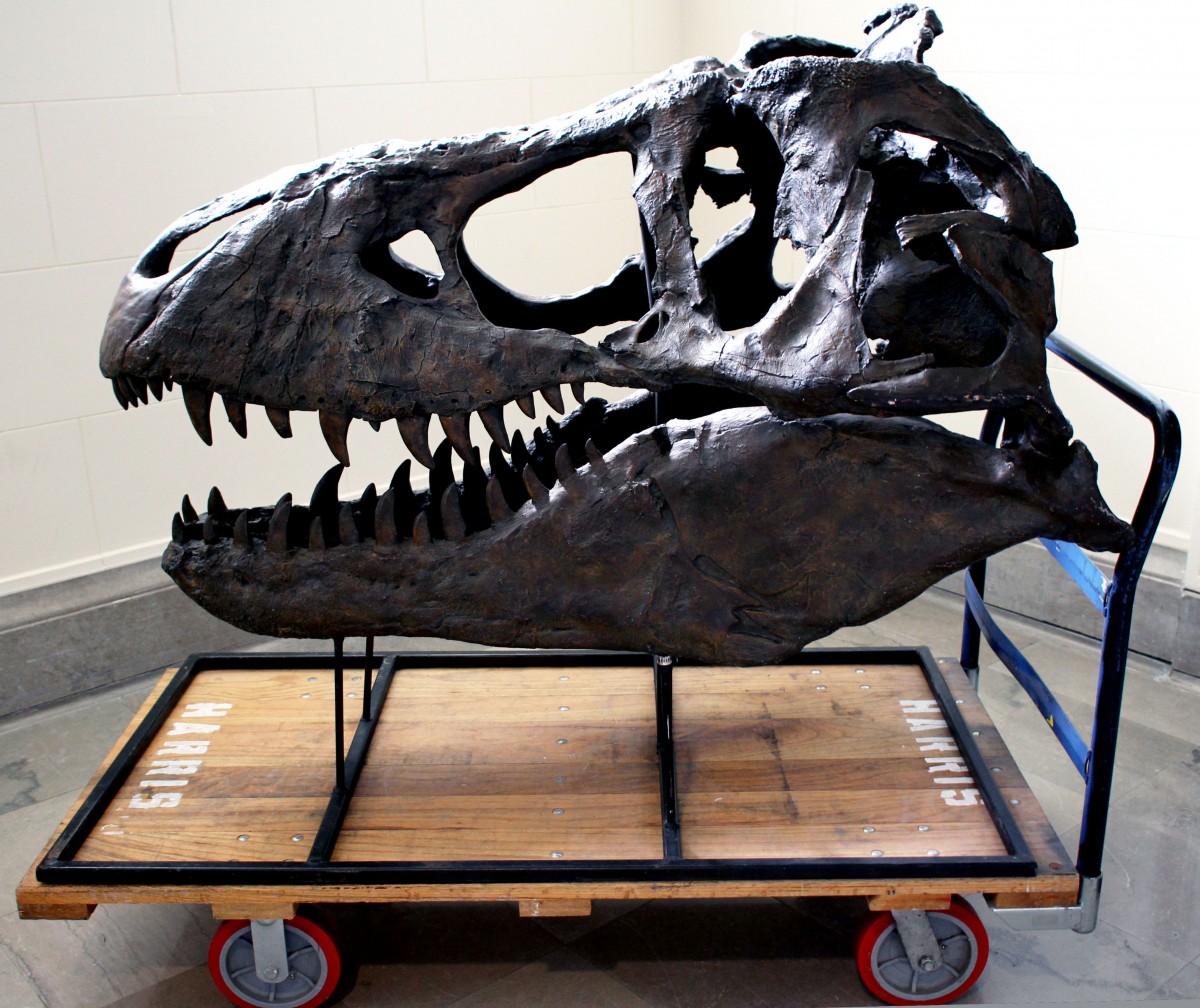 Norm, the life-sized reproduction of a Tyrannosaurus rex skull: This showstopper is the only item that costs extra to rent — specifically $200 — and requires a truck to transport from the museum. 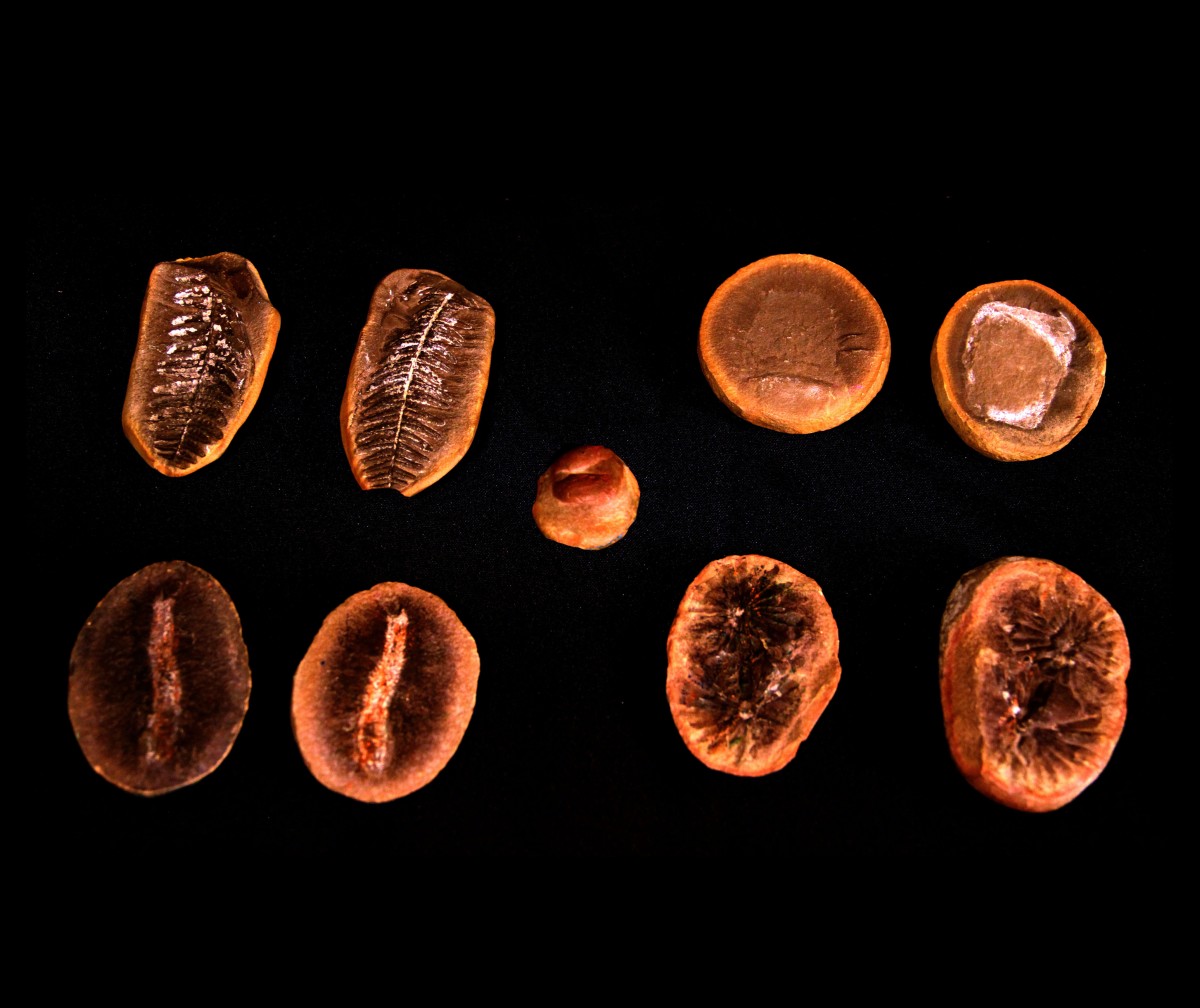 300-million-year-old fossils from the Chicago area: These fossils are from the Mazon Creek and give clues about what food sources existed around Chicago way before deep-dish pizza was invented. 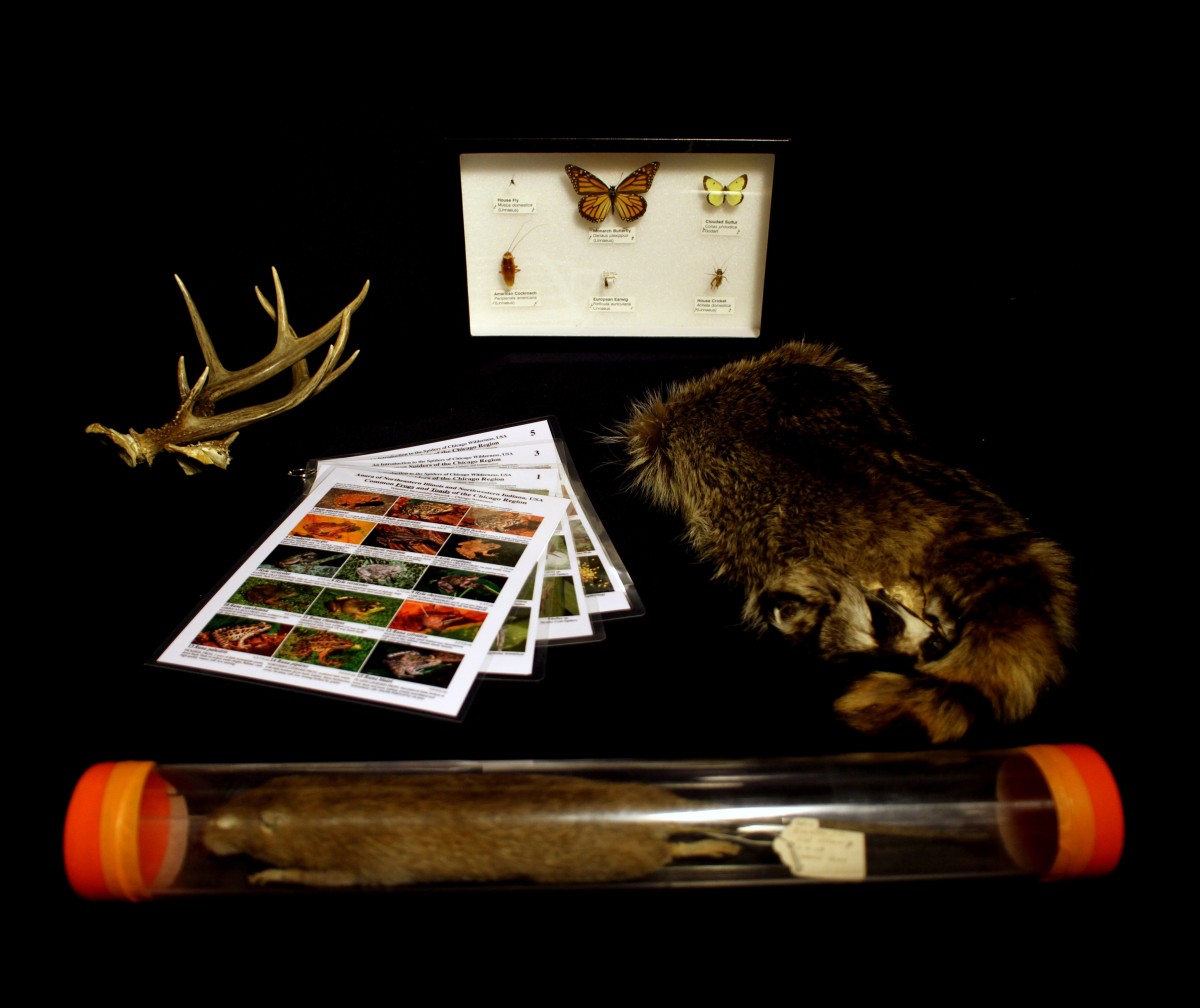 Wild in Chicago: This boxed set examines Chicago’s urban wildlife and includes a pinned cockroach, deer antlers, a raccoon pelt, and, amazingly, a stuffed rat in a tube. 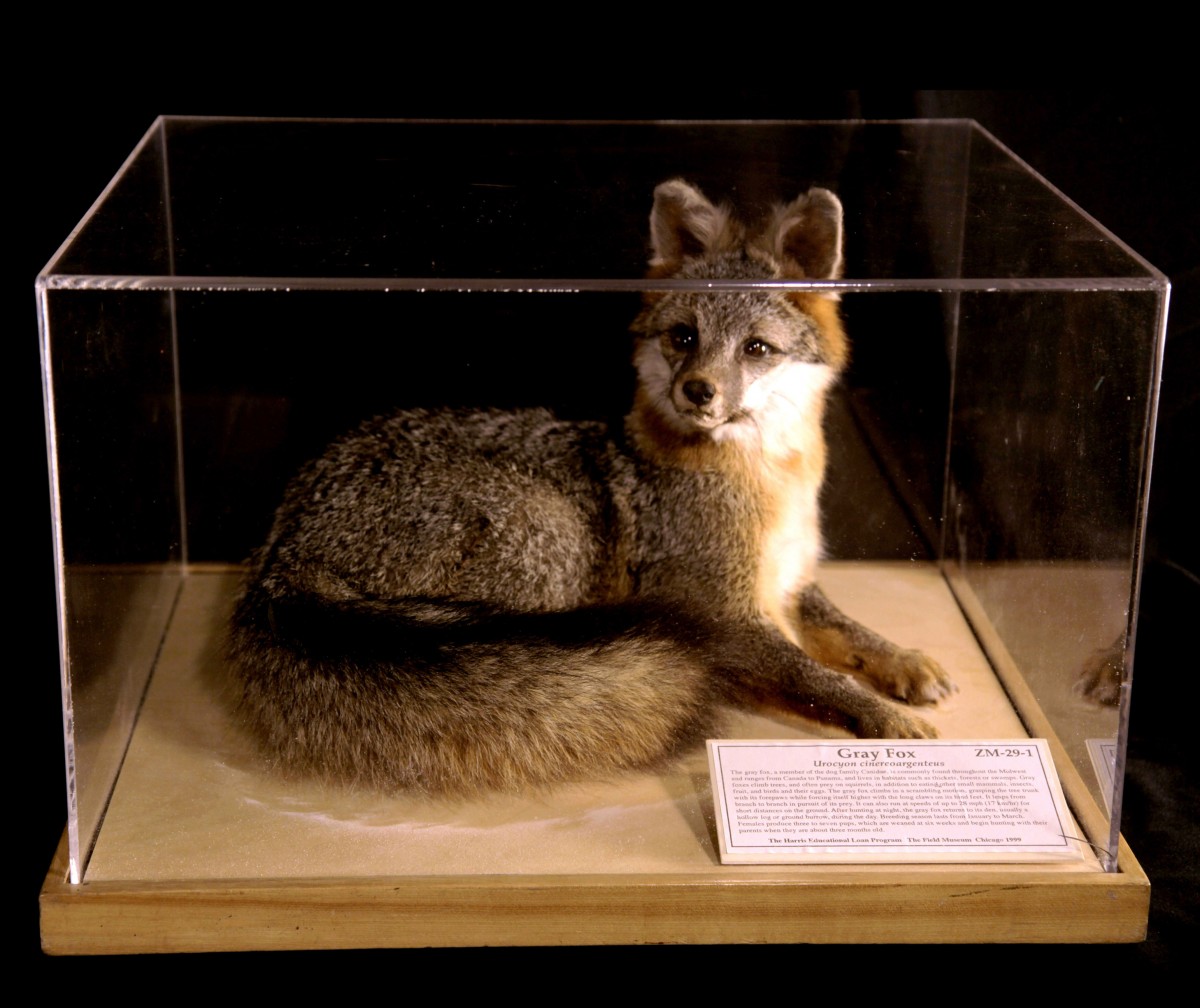 The gray fox: Mammals are the undisputed popular kids of the Field Museum’s rental collection, Quinlan says. And the clear homecoming king is this foxy gray fox, a handsome native of the Midwest. If he’s on loan, he’s got a twin for rent. Other mammals in the rental collection include a bunch of red foxes, otters, skunks, mice, squirrel, possums, rabbits, ermine, woodchucks, moles, and more. 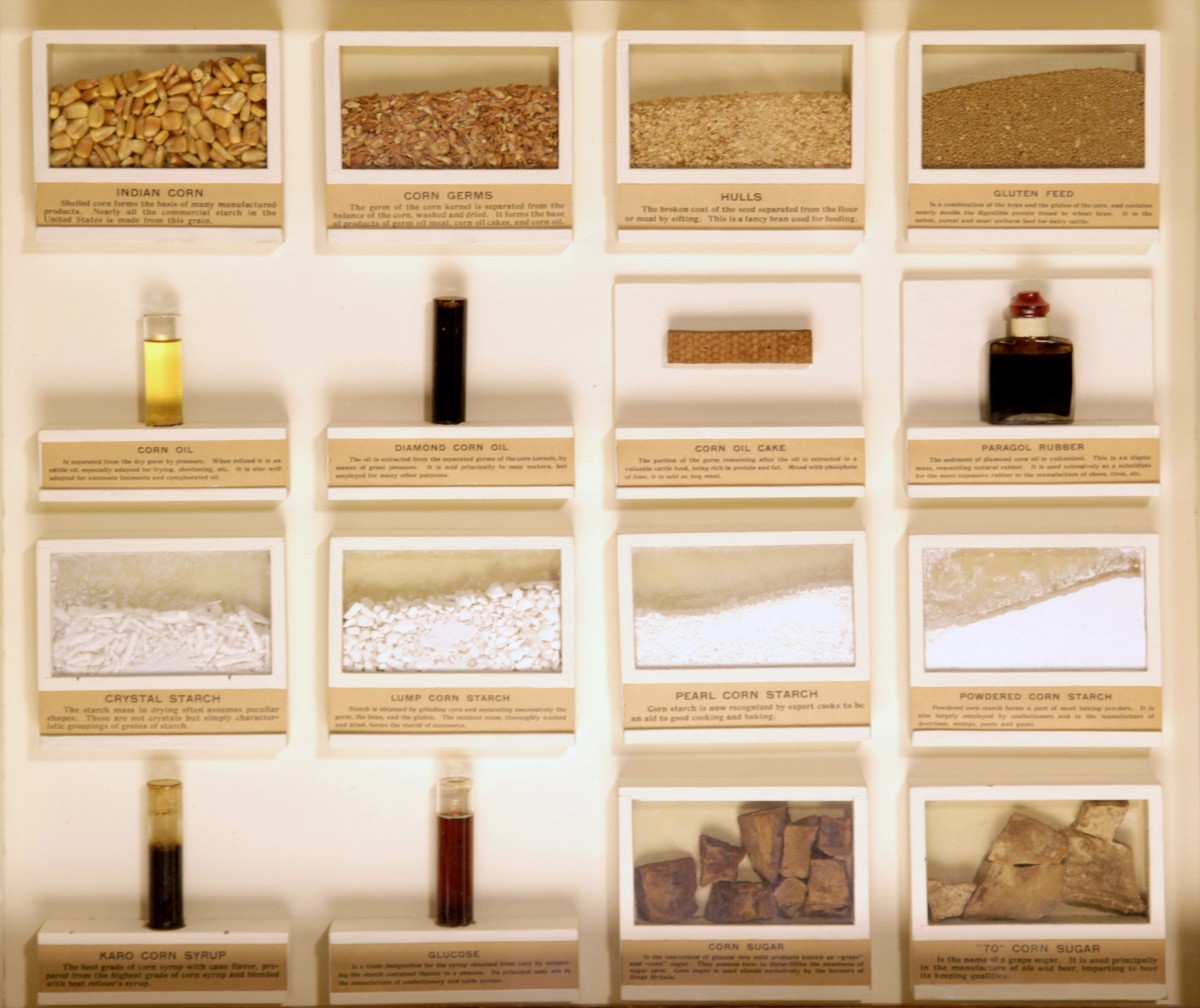 Industrial material dioramas: These dioramas, like the one above for corn, probably won’t fog up a lot of people’s glasses, but Quinlan says these dioramas are neglected gems of the collection and help illuminate important materials, like linoleum. 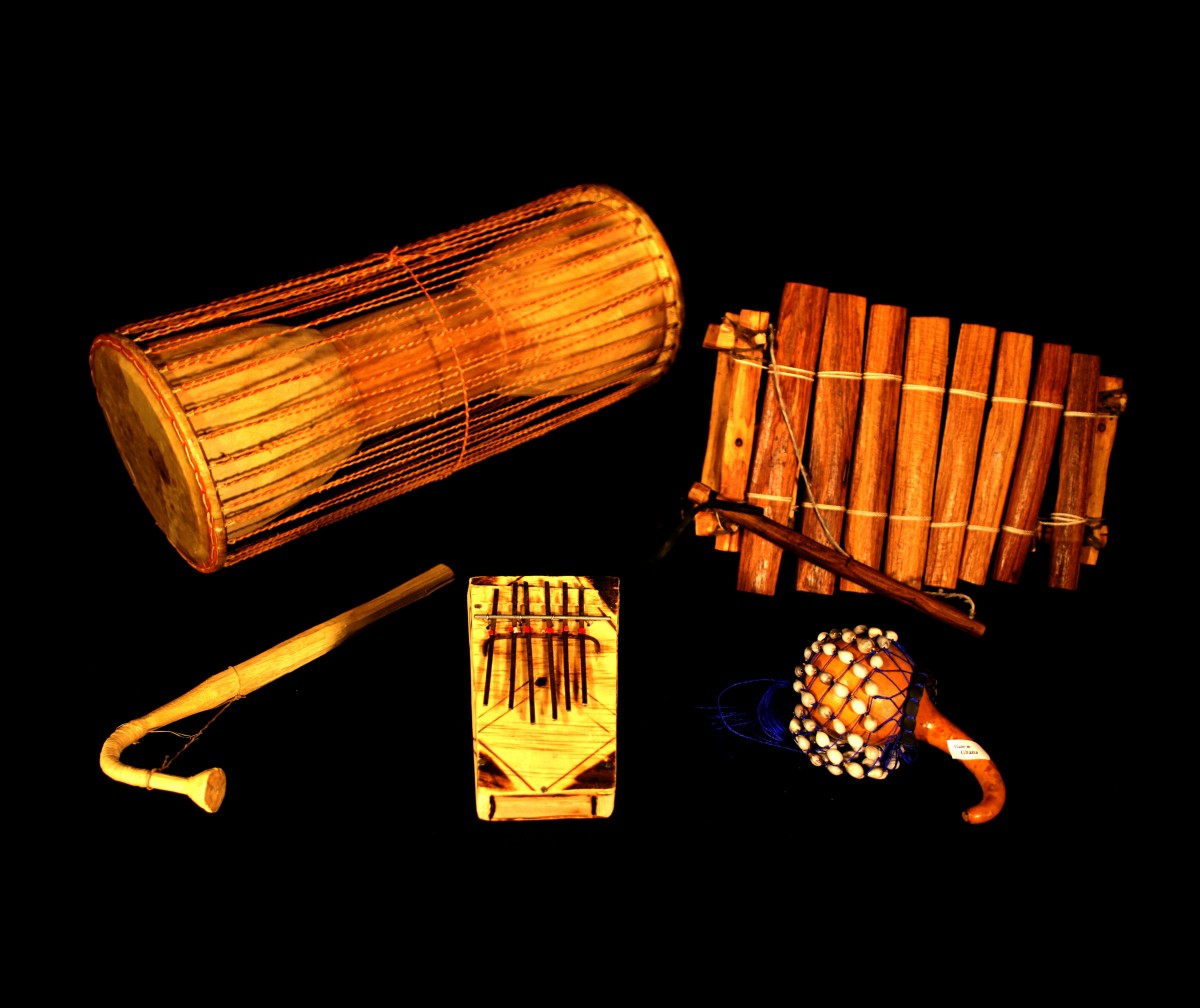 Sounds of Africa: This hands-on boxed set contains an African drum, thumb piano, shaker, and xylophone called a balafon. Renters are encouraged to try playing them. 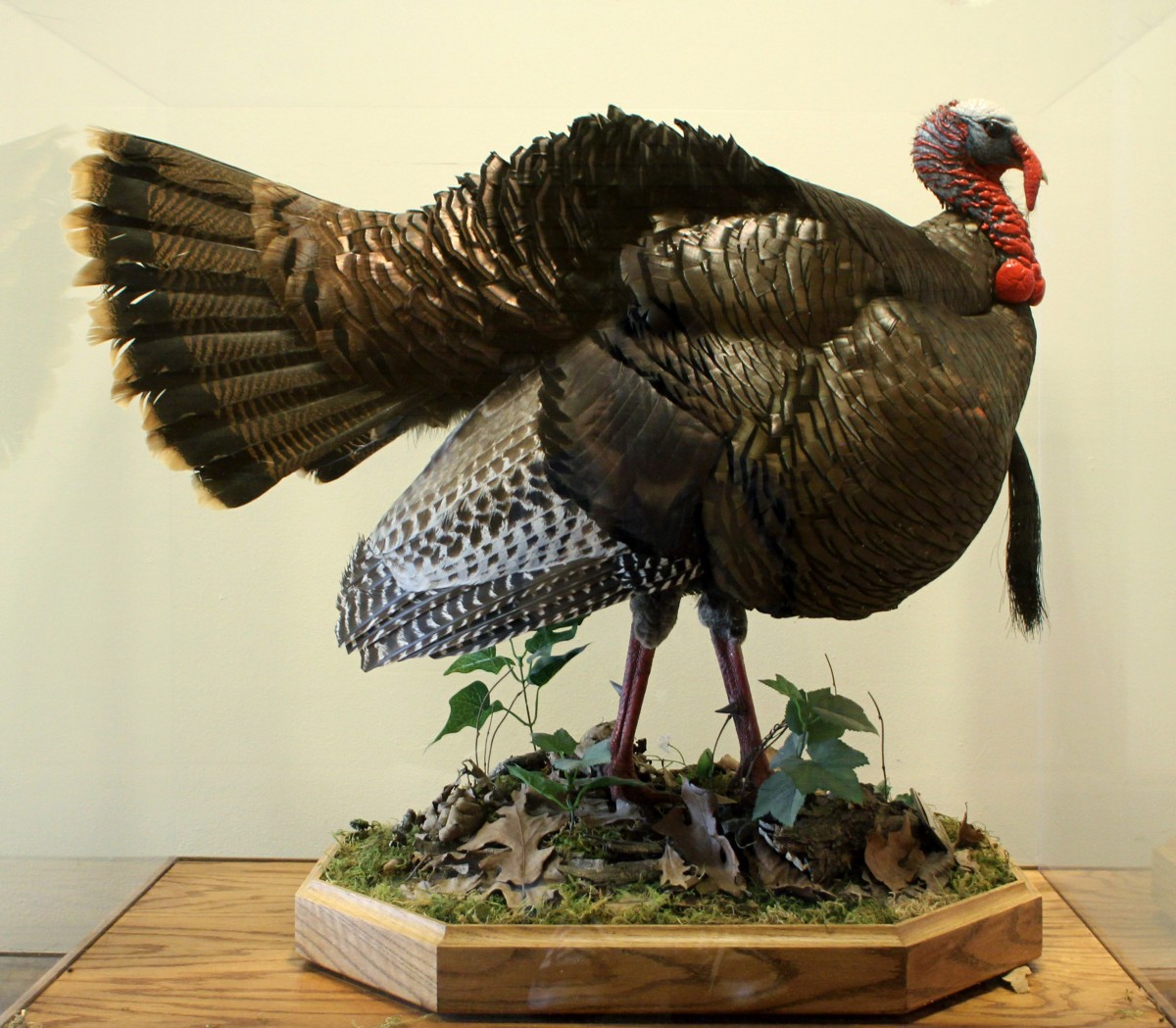 Tom Turkey: This enormous, stuffed wild turkey was donated by the Wild Turkey Federation. Quinlan says it is often checked out in late November but very available for much of the rest of the year. But FYI, there are some rental restrictions on Tom. 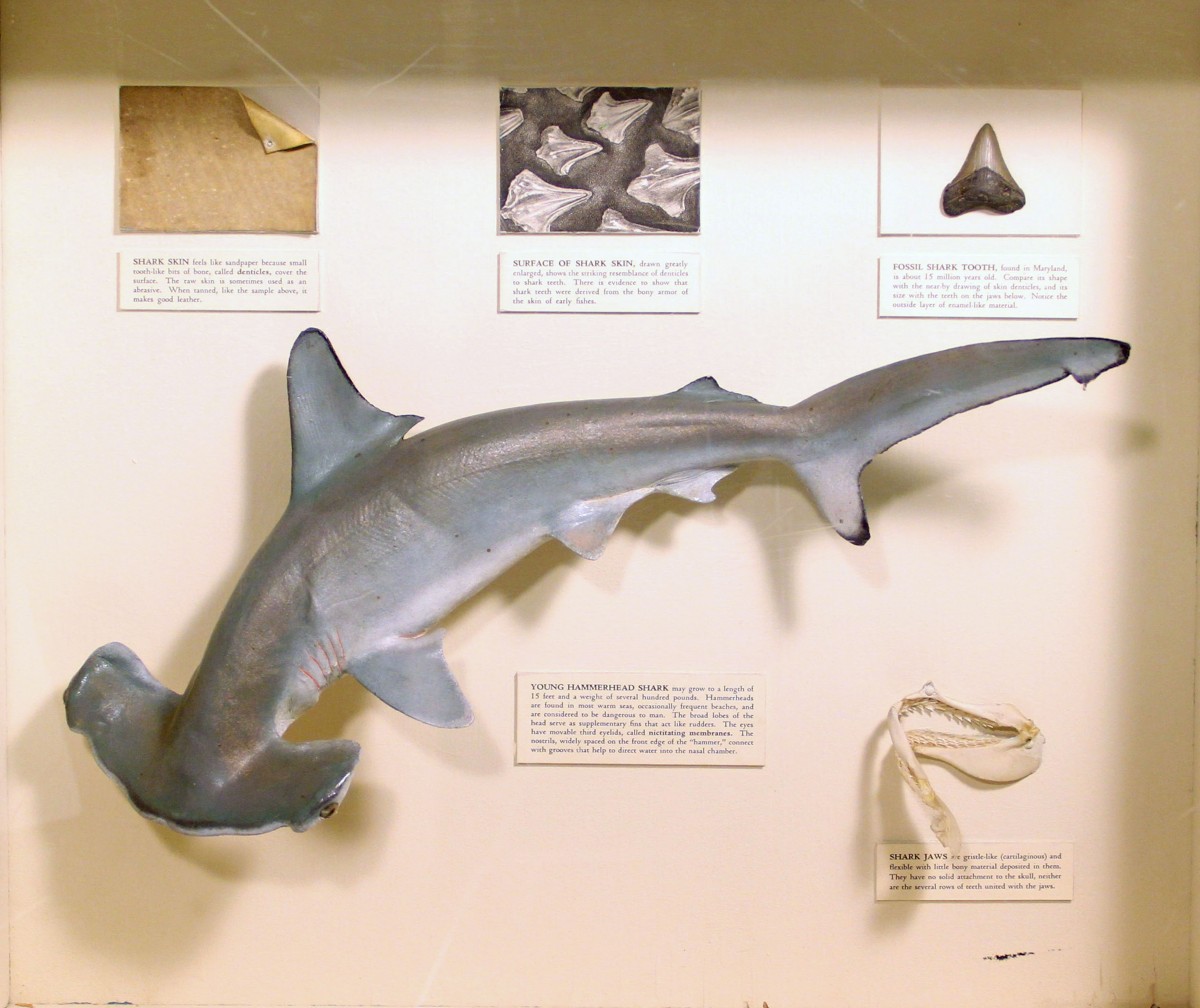 Hammerhead shark diorama: You don’t have to risk your life to get up close to shark teeth and jaws with this fascinating diorama.

9. Worst item for a picnic 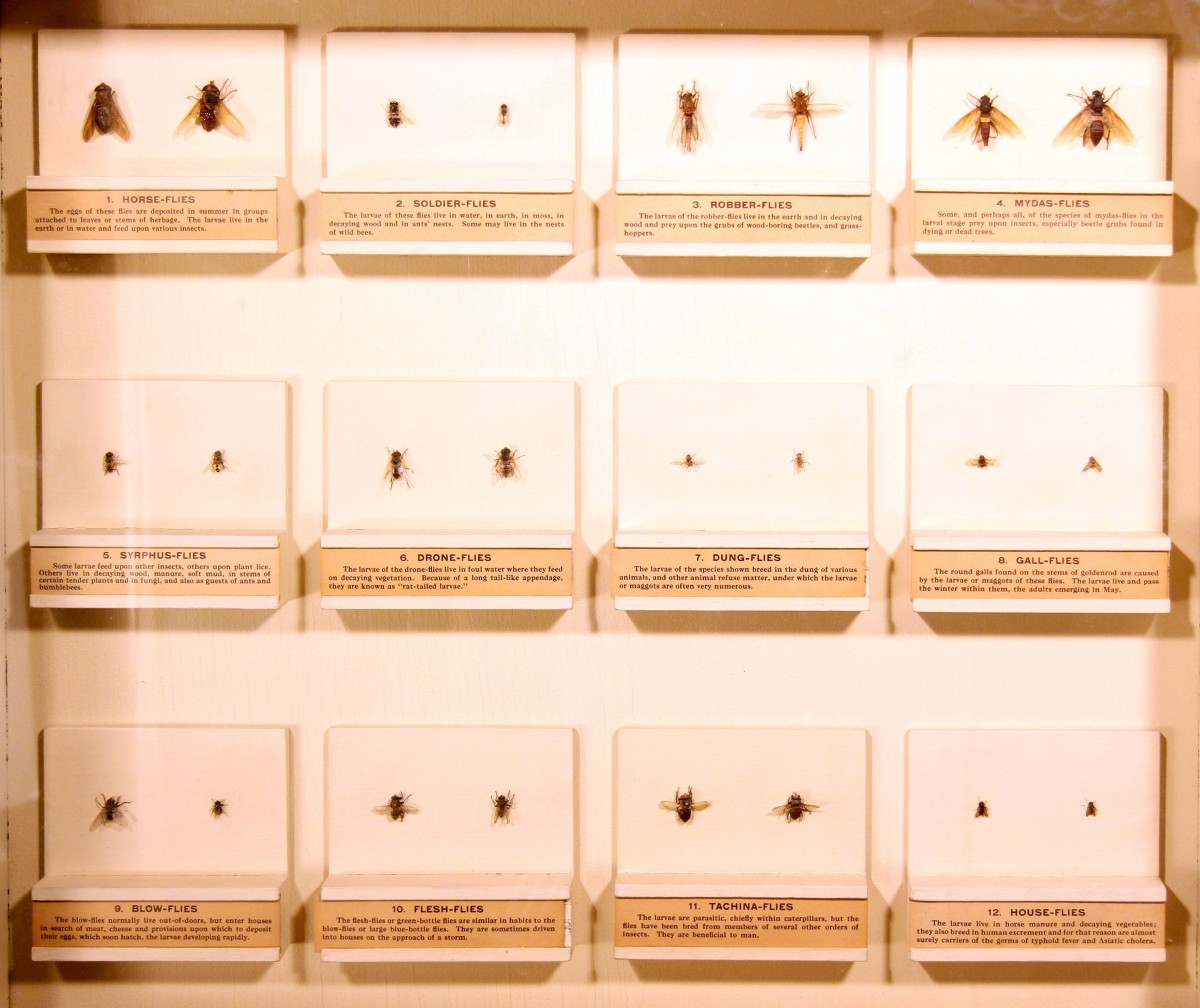 Diorama of flies: This boxed set features 20 pinned pairs of more flies than you might have known existed, like dung flies, soldier flies, and flesh flies. 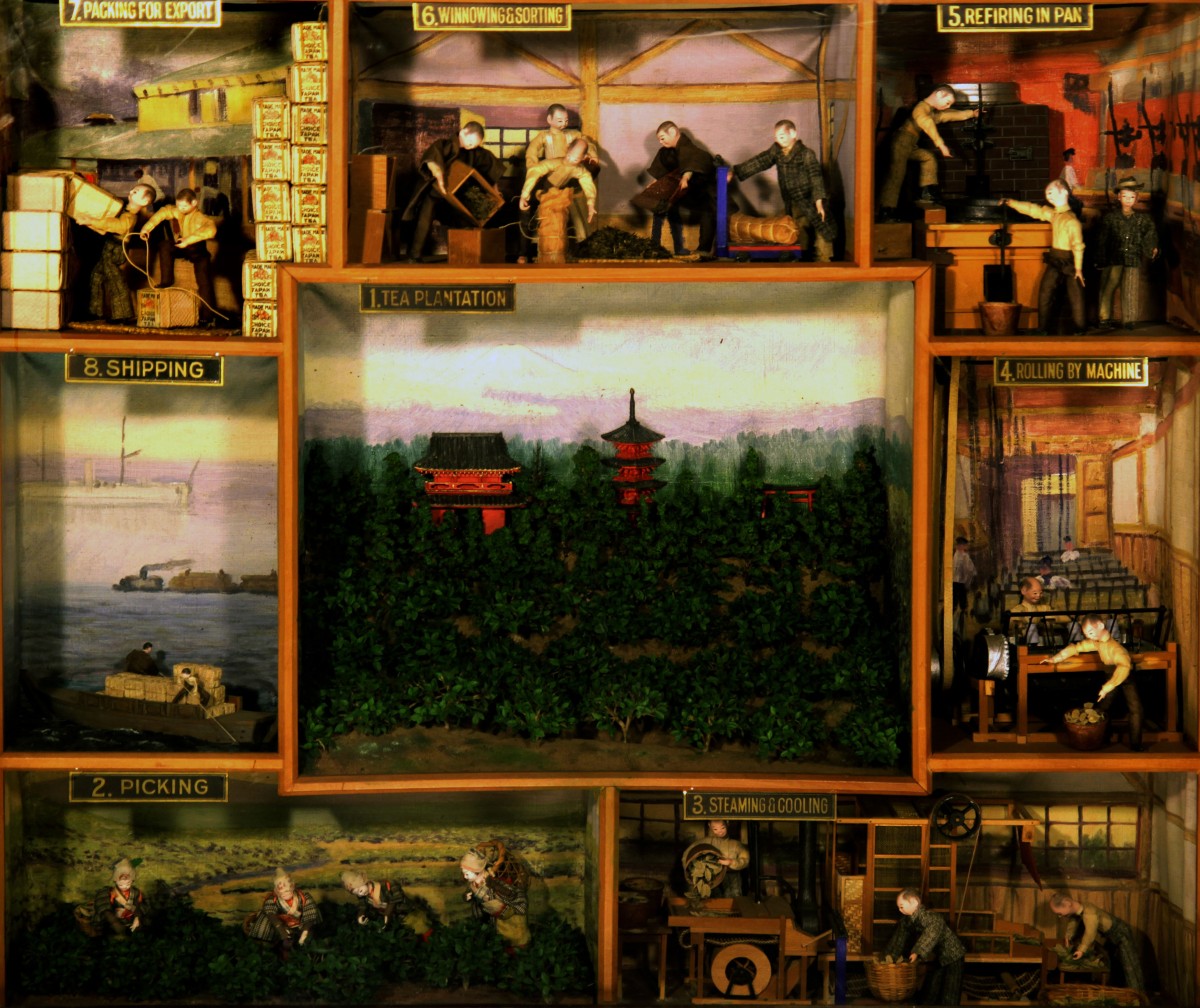 Diorama on tea: This eight-part diorama, with tiny Asian dolls, illustrates the journey tea leaves take from plantation to processing houses to cargo ships in charming little tableaus. It pairs well with the collection’s other diorama featuring a whole tea plant — but you’ll need a few scones, of course. 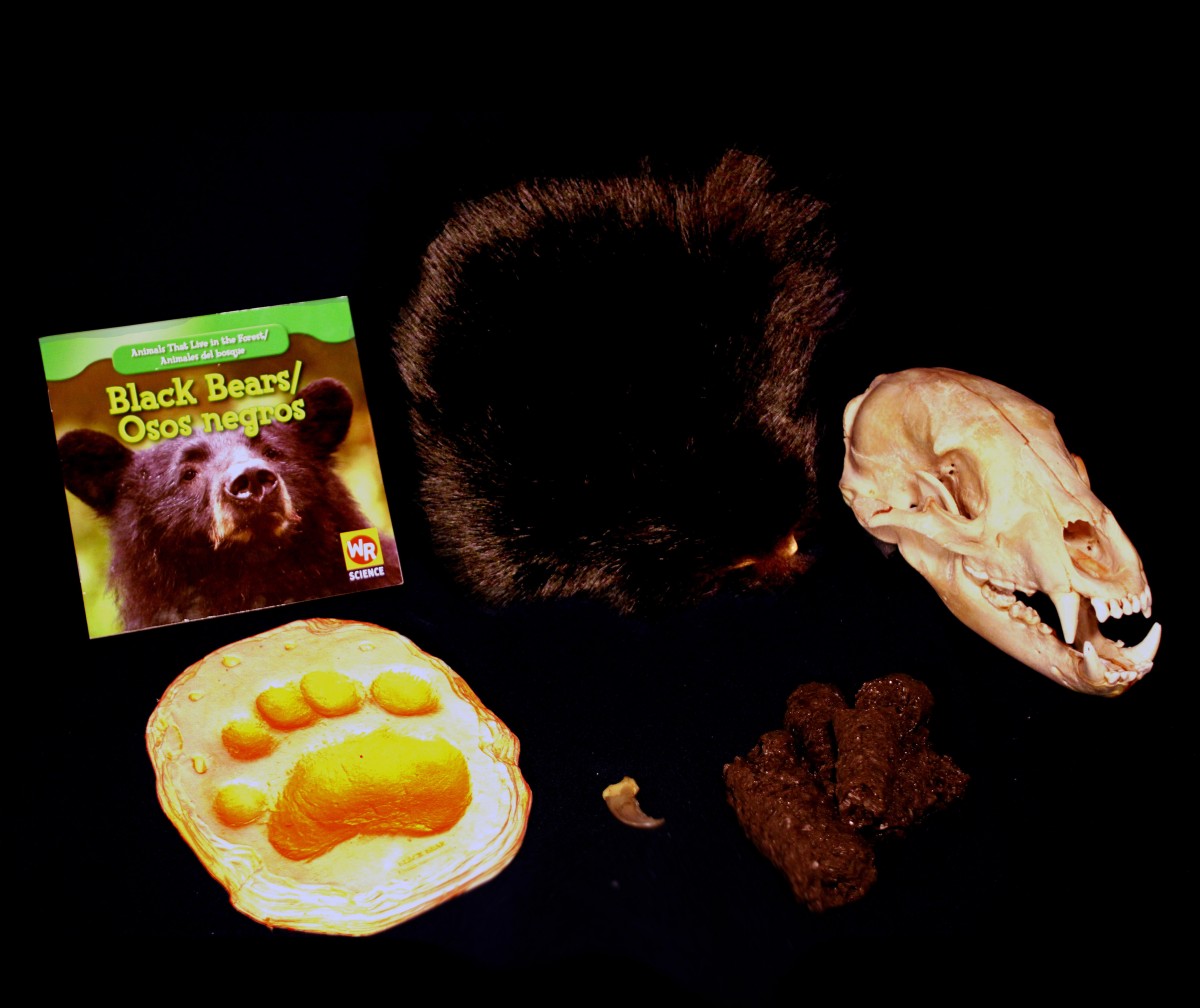 The bear box: This boxed set features hands-on items that include a bear pelt, claw, skull, and a container of large, spongy black logs meant to simulate bear feces. Very realistic but no smell. 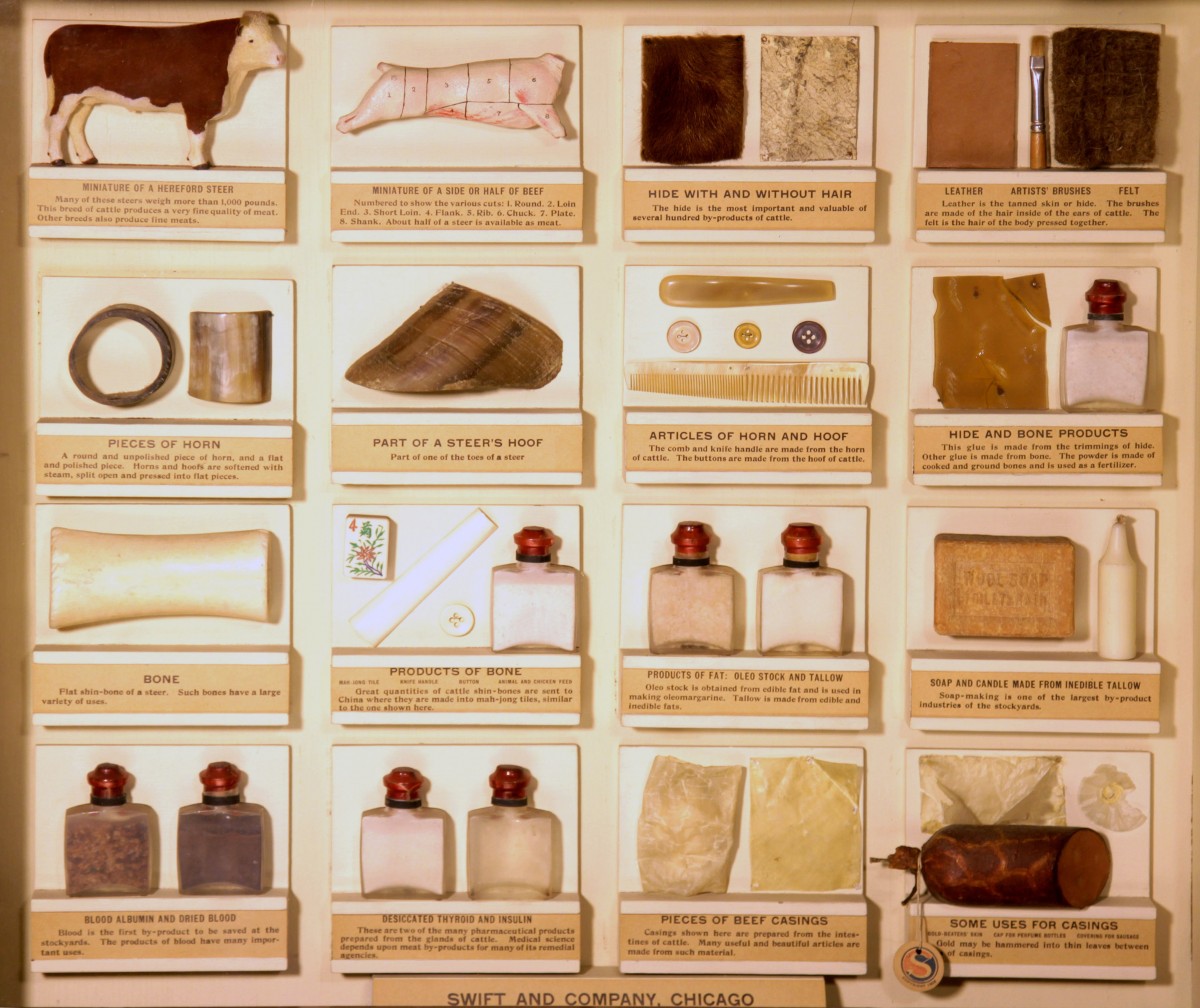 Diorama showing array of beef byproducts: This fascinating display illustrates the many offshoot industries that developed in Chicago during the early part of the 20th century, when the city was the slaughtering capital of the country. 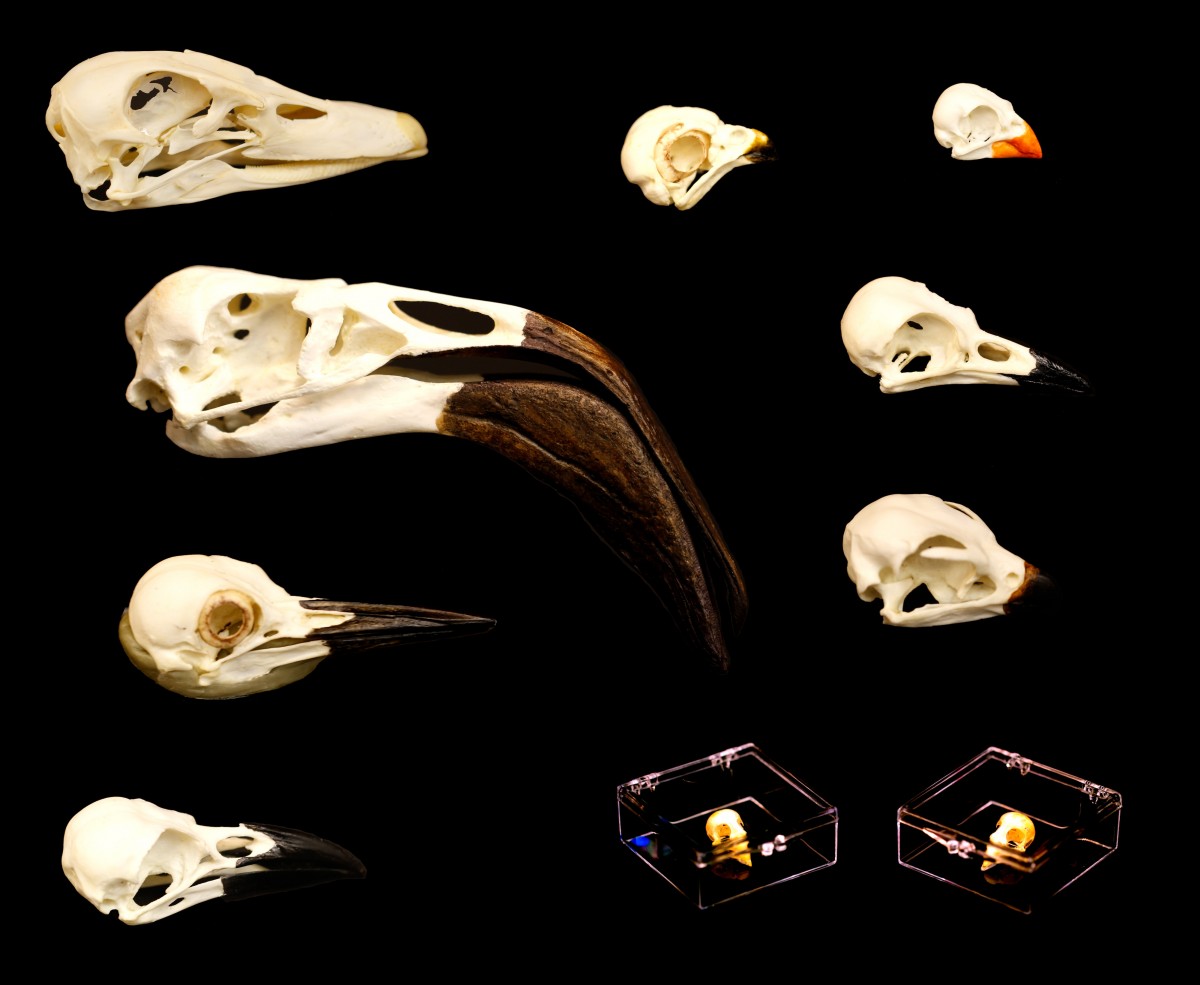 Bird Tree of Life: Nine-year-old Eva was captivated by this box of 10 different bird skulls that offer clues about their habitats and food sources. 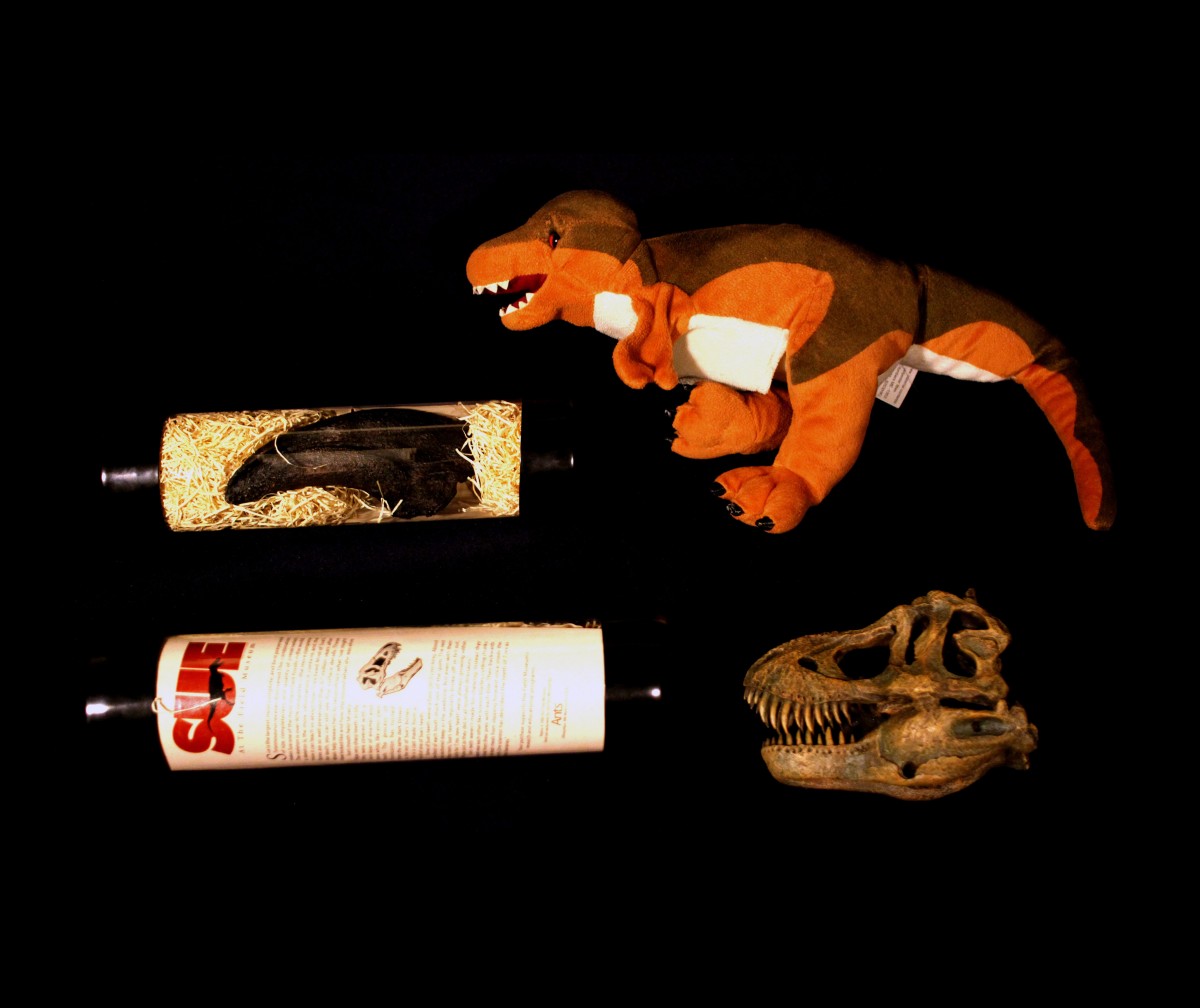 A T-Rex Named Sue box: Robert liked this box because its name is a play on the Johnny Cash song “A Boy Named Sue.” But he was also impressed by what items are included in the boxed set: replicas of a claw, tooth, and skull that help illustrate aspects of the Tyrannosaurus rex without terrifying children. The set also includes a plush Sue puppet.

15. Best item for board game fans sick of Settlers of Catan 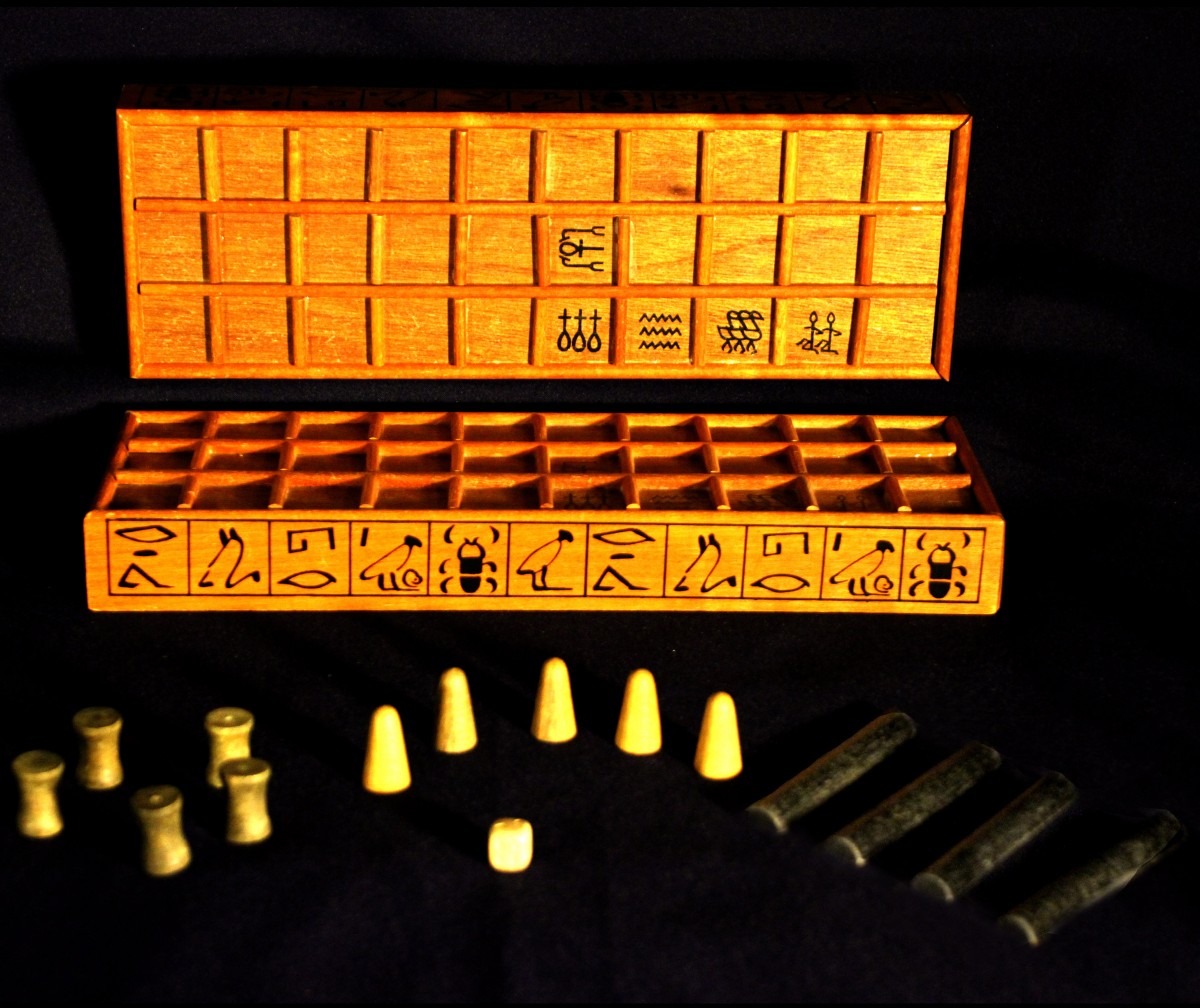 Ancient Egyptian board games: If you’re looking to out-nerd your board-game-loving friends, then show up with senet, a game similar to backgammon.

Robert K. Elder is a Chicago-area author and former tech and media executive (and this reporter’s former colleague at the Chicago Tribune). Robert is a longtime Chicago journalist and former executive at Crain Communications, the Chicago Sun-Times, and DNAinfo. He’s the author of eight books, which include The Film that Changed My Life, It Was Love When, Hidden Hemingway, Last Words of the Executed, and the upcoming The Mixtape of My Life.

Robert is also passionate about startups and entrepreneurship; he serves as a mentor at 1871 Chicago and TechStars.

Most importantly, he’s the dad of nine-year-old twins and says he is married to an “amazing woman who tolerates his love of movies, poker, public radio, museums, and odd family road trips off the beaten path.”

He also loves Curious City and thinks it should be syndicated nationally as Curious Nation.

Monica Eng is a reporter for Curious City. Follow her at @monicaeng or write to her at meng@wbez.org.