What’s That Building? The Cassidy Tire Building — And Its Unusual Escape From Demolition

The Cassidy Tire building, a tire dealership in River West, may soon be demolished to make room for another high-rise apartment building.

But the last time this building stood in the way of development, the owners lifted the entire 6,000-ton warehouse onto rollers and slid it out of the way, according to research by urban preservation planner and consultant Matt Wicklund for Preservation Chicago.

The building now stands at 344 N. Canal St. — 168 feet east and 52 feet south of where it was originally built, Wicklund found.

Preservation Chicago, an activist group that tries to protect historical buildings, is currently working to save the structure, said the group’s executive director, Ward Miller.

To preserve the building, Miller can look to the past. Here’s how it escaped demolition more than 100 years ago — and the man who masterminded the mechanics of the move.

Why it was moved from one spot to the other

The building was constructed in 1902 as a factory and warehouse for the glass company Tyler & Hippach, according to a newspaper article from the time. But it faced demolition just four years later when the Chicago and Northwestern Railway began moving its terminal at Wells and Kinzie to Madison and Canal.

Moving the terminal also required moving the tracks leading to and from the station. So Chicago and Northwestern Railway bought a number of properties in the way, including older iron and steel warehouses, a couple out-of-date hotels and what’s now the Cassidy Tire building, Wicklund found. They were all initially consigned to demolition, but the Cassidy Tire building was spared.

The man behind the move 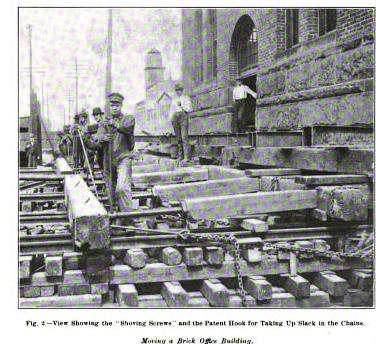 An image from the architectural journal ‘Building Age’ shows workers under Sheeler in the process of moving the four-story office building. Public Domain / Google Books

In the early 1900s, Sheeler developed an interesting specialty: lifting and moving buildings.

He moved a Chicago church 50 feet in 1895, lifted a church in Vicksburg, Miss. so a new foundation could be built in 1909 and moved a four-story office building in Cleveland “several hundred feet” in 1901, an an average of 12 feet a day — without interrupting office workers inside or the building’s utilities.

In a similar method to the Cleveland building, Sheeler put the Cassidy Tire building on rollers to move it to where it stands today, according to Wicklund.

Henry Schlacks, who designed the Cassidy Tire building, is mostly remembered for his many Chicago churches.

He designed St. Gelasius Church in Woodlawn (which later became the Shrine of Christ the King), St. Adalbert’s in Pilsen, St. Ita in Edgewater and St. Boniface in Noble Square. There are also churches by Schlacks as far out as Topeka, Kansas.

Can it avoid demolition again?

In May, the real estate development firm Habitat announced it would buy the 117-year-old building from the Cassidy Tire company and replace it with a 33-story apartment building.

Terms of the sale haven’t been disclosed. Cassidy Tire, which has other locations throughout the Chicago area, did not respond to requests for comment.

The future use of the site aligns with what has recently sprung up on surrounding blocks, including the 38-story Riverbend condo building and the 36-story Left Bank at K Station apartment building. Other high rises are built or planned on several sites nearby, including a trio of buildings on the river near the Merchandise Mart.

But Miller, Preservation Chicago’s executive director, hopes there is a way to keep the building intact. He said his group will advocate for landmark status. He also hopes to talk to Habitat about incorporating the existing building into their planned development, rather than demolish it.