Chicago police have drastically reduced the number of times officers shoot their guns at civilians, and the reduction in force does not appear to have had a negative impact on officer safety, according to a WBEZ analysis of city and county data. 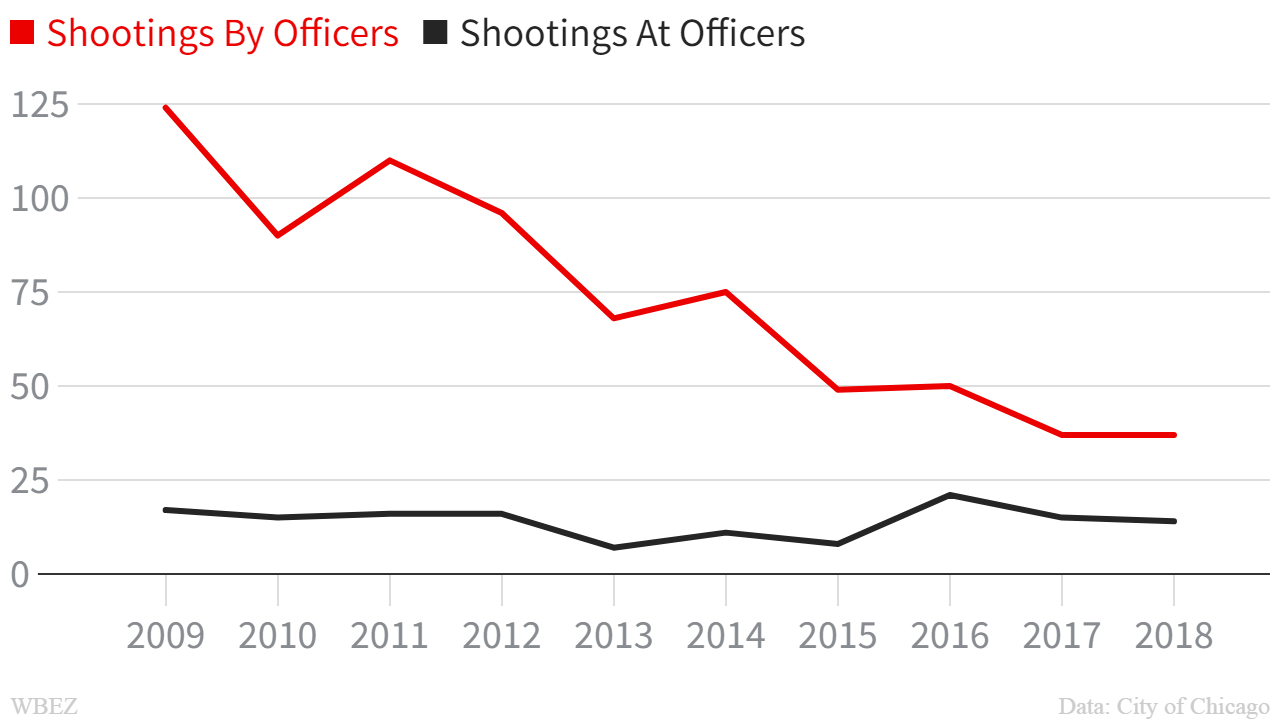 The Police Department said the drop in shootings by officers is the result of better training. But activists and former officers agreed the decline should instead be attributed to increased public scrutiny of so-called “officer-involved shootings,” although they differed on whether the trend is a positive one.

“What has been happening over the past decade is mass protests and exposure of police violence and sort of community accountability,” said Page May, the co-founder of the activist group Assata’s Daughters. “There's been increasing attention to these issues and awareness, and so that is actually what is helping to keep people a little bit safer.”

May and others pointed to the fact that attacks on officers did not meaningfully change as proof that the reluctance to shoot is not making officers less safe, and the public attention on police shootings provided a necessary course correction for Chicago officers.

Activist Ja’Mal Green said the data disproves the narrative he hears that police only shoot when faced with a deadly threat, and he said it contradicts any claims that increased scrutiny on police makes officers less safe.

But Green does not believe the drop in shootings by Chicago police represents any sort of deeper shift and worries that the trend could reverse at any point.

“The numbers are going to go up and down depending on the year because we're not addressing the real root problems of the Police Department, which is we need a culture change,” Green said.

May said she was pleased but not surprised to hear of the dramatic drop in shootings by officers, but she emphasized that police shootings are only one part of “police violence.”

“I think that there is a lot of outrage at the excessive violence today and the spectacle of violence,” May said. “We have to understand that there's the mundane violence that they inflict.” 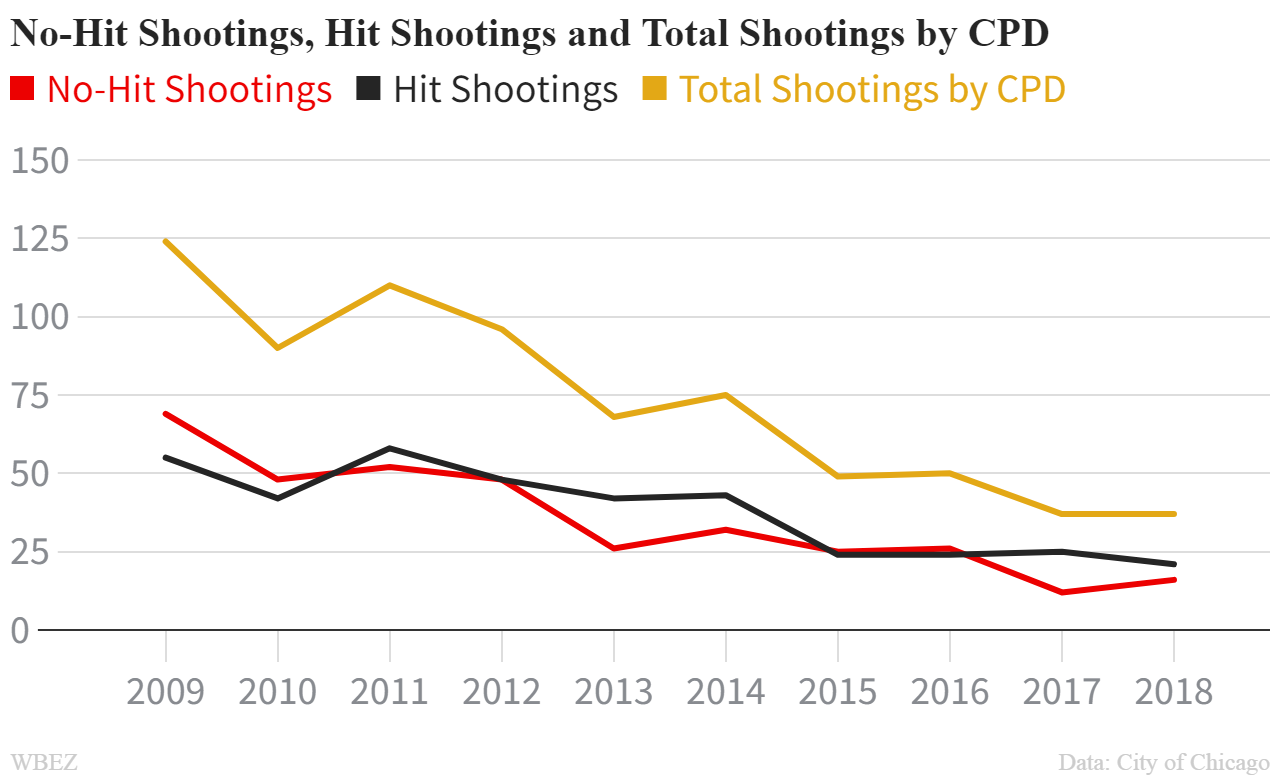 May said police hitting people with batons or their hands, using tasers and unnecessarily making arrests are all examples of how police can harm residents without using their guns.

Where Page and Green see a necessary reduction in police shootings, former Chicago Police Officer Richard Wooten sees a potential threat to the safety of officers and the public.

“What you have right now are police officers being very hesitant about pulling the trigger on a handgun because they don't want to be the next YouTube sensation,” Wooten said.

Dean Angelo, Sr., the former president of Chicago’s police union, said his message to officers about when to shoot is: “You have to make sure you go home, and you don't want policy or pressure … to make that call for you.”

“What is going through the minds of a lot of the people that I speak with, when they respond to these situations, they're worried or concerned about … the fallout,” Angelo said.

Angelo disputed the idea that the consistency of shootings at police shows officers aren’t facing increased dangers as they shoot fewer people. He said there are “so many” other danger officers face besides being shot.

“Anything that’s not stuck to the ground can be a weapon,” Angelo said. “It’s a tough job, you have to be very aware of your surroundings, you have to be aware of the hands of the individuals you’re talking to, because therein lies the threat.”

In an effort to quantify other threats officers are facing, WBEZ looked at data from the Cook County state’s attorney’s office on incidents of aggravated battery against police officers. The data shows Chicago police referrals to prosecutors for aggravated battery of a police officer have remained steady since 2011, the earliest date for which the data is available. 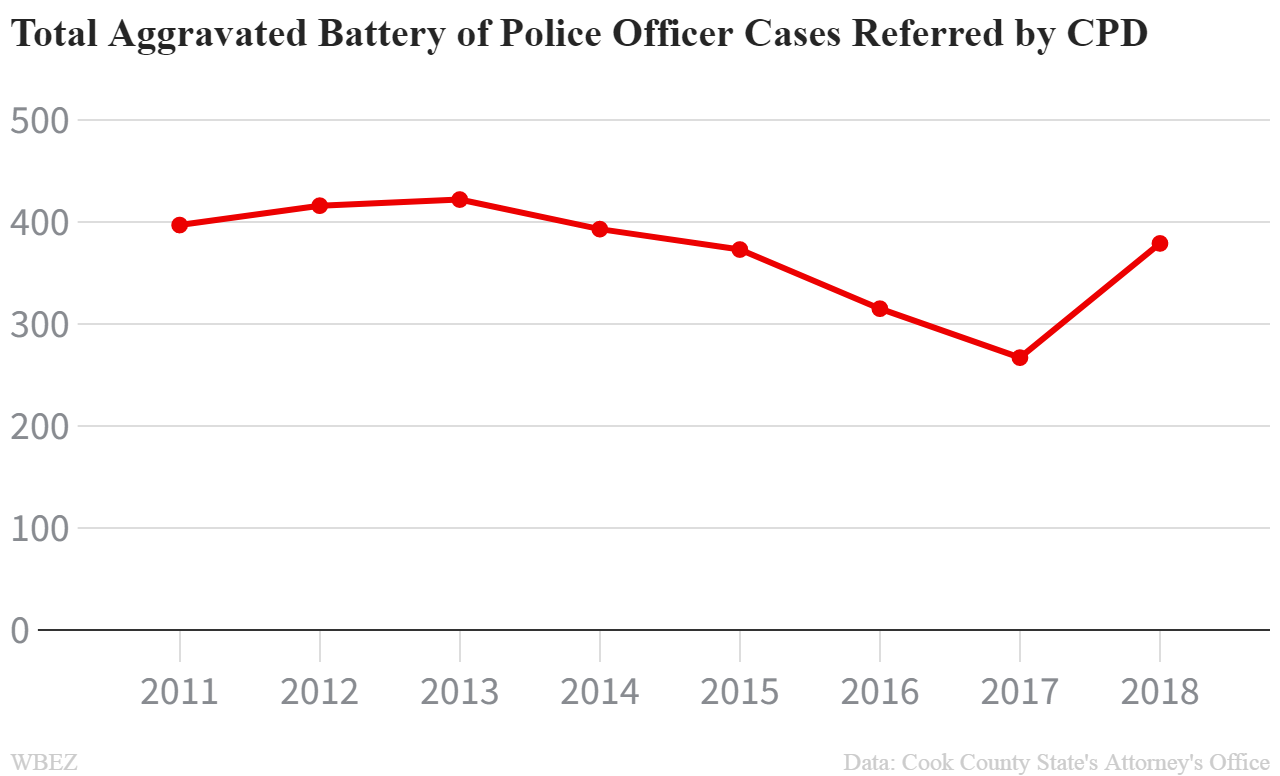 Angelo also wondered if public scrutiny is making officers less likely to confront dangerous people or intervene in violent confrontations. That reluctance could mean fewer shots fired by police and fewer opportunities for people to shoot at officers, but he said it could “put the civilian population at greater risk because they don’t engage.”

Chicago Police Department spokesman Anthony Guglielmi said he does not believe the reduction in shootings by officers is linked to a fear of public attention. Instead, he credited department training.

“We've really invested in training, and so we attribute a lot of that to better educating officers on … how to handle their weapons and really how to de-escalate conflict,” Guglielmi said. “We have to give them training so that they know how to get themselves out of a potentially dangerous situation.”