Jeanne Cuff lives in Portage Park, well within Chicago city limits. So she was surprised last summer when she was awakened at 3 a.m. by a screaming goat.

“I woke up thinking that someone was getting killed in the alley because of this horrible noise,” she recalls.

The screaming goat was giving birth in the backyard next door. And she belonged to Jeanne’s neighbor, Sandy Lavorini.

Lavorini’s been raising backyard chickens and goats for years. When we visited she had two goats, three cats and 14 chickens living peacefully in her backyard complex of pens and a mini barn.

But Lavorini’s whole livestock setup has sometimes strained the neighbors’ relationship. Jeanne says she just didn’t expect to live next to goats in Chicago.

And this wasn’t her only surprising interaction with urban livestock.

Jeanne’s babysitter, it turns out, had a soft spot for swine.

“She kept a 350-pound pig in her North Center bungalow!” Jeanne recalls with a mix of amusement and horror.

All these urban animal experiences have left Jeanne baffled, so she asked Curious City: “What is the limit on the number of animals you can have in the city?”

No number limits on livestock!

Well, Jeanne, the short answer is: none. Chicago’s municipal code offers no specific limit on either the number or kind of animals Chicagoans can keep.

There are, we should note, codes that prohibit keeping animals for meat and slaughtering them at home. Chicagoans can, however, raise animals for eggs and milk. Animals also can’t make “excessive noise.” But for something to be considered excessive noise, it has to last for 10 consecutive minutes and be witnessed by a city officer or three sworn (presumably angry) neighbors living at three different addresses, who provide noise dates and times.

This stands in stark contrast to many surrounding suburbs, where would-be livestock owners face tough bans and restrictions on livestock-keeping. Many of these regulations have been passed in just the last decade.

Jeanne’s quite aware of this seemingly upside-down urban-suburban divide.

“I work up in [north suburban] Vernon Hills and everybody out there lives in the suburbs,” she says. “They’re all shocked that I have chickens next door, and I say, ‘Chickens? That’s nothing. I have goats.’” 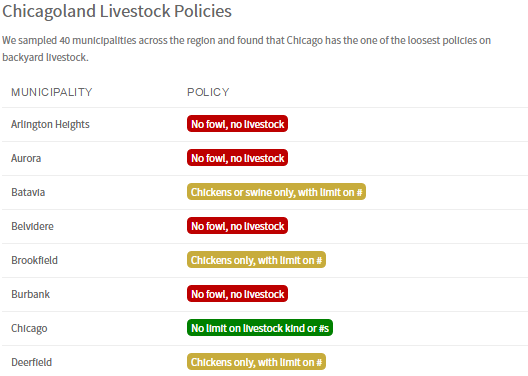 The back (yard) story

How did this happen? How did the state’s most densely-populated city end up with some of the loosest urban livestock laws?

The first reason has to do with changing community identities. Martha Boyd, Program Director at Angelic Organics Learning Center, has been studying local livestock laws for several years. She says she’s noticed that many of the suburbs that have passed bans were in the process of redefining their image.

Boyd says those suburbs wanted to announce that they weren’t a rural place anymore and they believed it made them more sophisticated. Many local livestock laws have changed over the last decade. “Livestock is seen as sort of a throwback,” she says.

But at the very same time, cities like Chicago were seeing an explosion of interest in the opposite direction — green-minded citizens and mayors like Richard M. Daley and Rahm Emanuel were embracing urban agriculture. Many Chicagoans wanted to get closer to their food through activities like gardening and keeping chickens for eggs.

Although no one keeps official records on livestock ownership in Chicago, retailers like Lidia Andronic at Belmont Feed and Seed says backyard chickens are booming.

“We always carried a little chicken feed, but in 2009 and 2010 it exploded,” says Andronic, whose Roscoe Village store also carries supplies for pigeons, bees, goats, rabbits and pigs.

With the rise of the internet, these urban farmers have been able to connect and share information like never before. This has spawned broad-based groups like Chicago’s Advocates for Urban Agriculture. But it’s also helped connect smaller, more focused spinoff groups like Chicagoland Chicken Enthusiasts. Boyd helped organize these friends of the fowl when their rights came under attack in 2007.

The attack happened when Ald. Lona Lane, 18th Ward, proposed a citywide ban on raising chickens. She and other ban supporters claimed the birds were attracting rats and creating filth.

“The stench and the smell from their feathers and bodies are creating a lot of debris and a lot of havoc among neighbors,” Lane said during a 2007 city hearing on her proposal. “Also, these neighbors are killing the chickens and letting them run around in their backyard without a head, like they are doing some sort of sacrifice.”

At the time, the municipal code already prohibited ritual (except kosher) animal sacrifice, but support for an outright ban gained momentum during a Health Committee hearing.

That’s when the Chicken Enthusiasts flew into action. They attended meetings, made calls and met with key legislators, ultimately killing the proposal.

Although Boyd and the Enthusiasts were pleased with the outcome, they later learned they weren’t the only ones fighting the 2007 proposal — they had powerful poultry allies inside City Council.

“In later years, I heard nuggets about the politics around this,” Boyd says, “like a chicken keeper who was in school with an alderman’s chief of staff and some other ways that the proposed ban was stopped before it was even reported out on the floor of council.”

After that close call, Boyd says the group got even more organized and grew. She says today 600 to 700 chicken keepers and supporters are connected through a listserv. 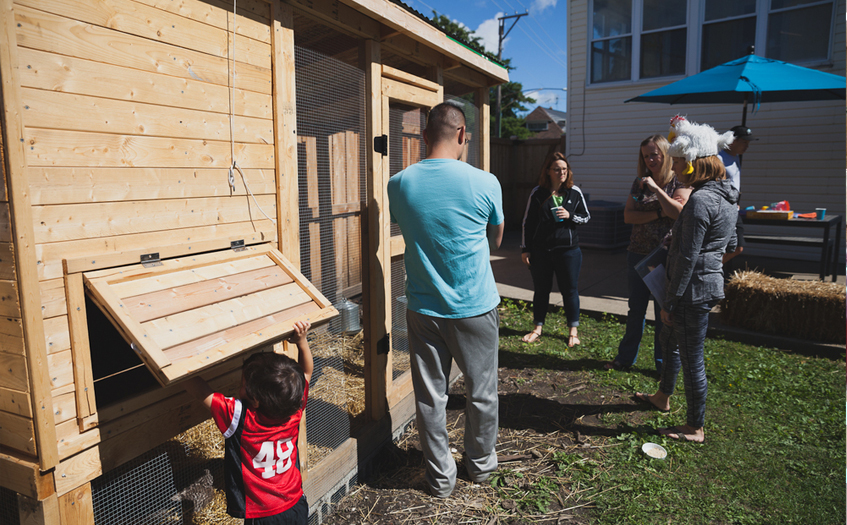 The group tracks chicken laws in the region and remains vigilant about threats in the city. So when Ald. Joe Moreno, 1st Ward, was considering new restrictions in 2012, the Enthusiasts were ready with their own recommendations for best practices. But it never ended up being an issue, as Moreno dropped the push for new restrictions. His office says he doesn’t plan to pursue them in the future, either.

In addition to these assurances from formerly contentious wards, livestock lovers got an extra layer of security in October 2015. That’s when the Emanuel administration amended the municipal code with language that explicitly grants folks the right to keep animals for “eggs and milk.” A spokesman for the city’s law department said it was part of a routine update of codes during which the administration aimed to clarify those rights which had been vaguely worded before.

Concerns as the herd expands

For now, livestock lovers appear to be safe in Chicago. But what about in the future?

Despite Alderman Lane’s reports about chicken stench and alleged sacrifices in the 18th Ward, her successor, Derrick Curtis, says he sees no such problems today.

“Since I’ve been in office [two years] we have not gotten any calls about problems with raising livestock at all,” he says

But Boyd says livestock interest continues to boom, evidenced by the growing numbers of folks showing up at her annual chicken coop tours and Urban Livestock Expo, where urbanites can learn to raise animals like chickens, goats and bees.

So what if it just keeps growing, and, say, the majority of Chicagoans decide they want livestock in their yards, too? Would Boyd support more regulation in that case? Probably not.

She says she’d rather have livestock owners help regulate themselves by reaching out to those whose noisy or stinky animals could give the movement a bad name. 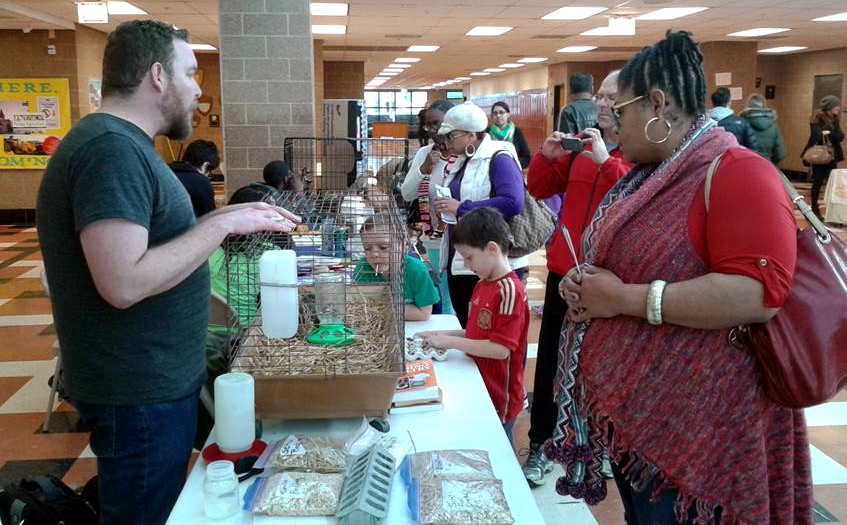 And so far, she thinks it has worked.

“[Chicago’s department of] animal control doesn’t seem concerned,” she says. “They get their share of complaints about backyard roosters but they also get calls from people who think that wild birds look cold in the winter. So they tend to take the calls in stride.”

When I bring all the information to Jeanne, she says she finds the idea of unlimited livestock theoretically “terrifying.” But she’s comforted by the existing codes that prohibit raising animals for slaughter, keeping dirty living pens and allowing animals to make too much noise. Plus, there are some perks to having livestock-owning neighbors.

“Now, I get fresh eggs when the chickens are in an egg-laying mood,” she says, referring to the hens kept by neighbor Sandy Lavorini. “She will give me eggs and I’ll give her cookies or quiche.”

The goats are also no longer an issue on Jeanne’s block. Lavorini decided to give them up after one kicked a member of her family and another charged her while attacking another goat. They were recently sent back to a farm, far outside city limits. 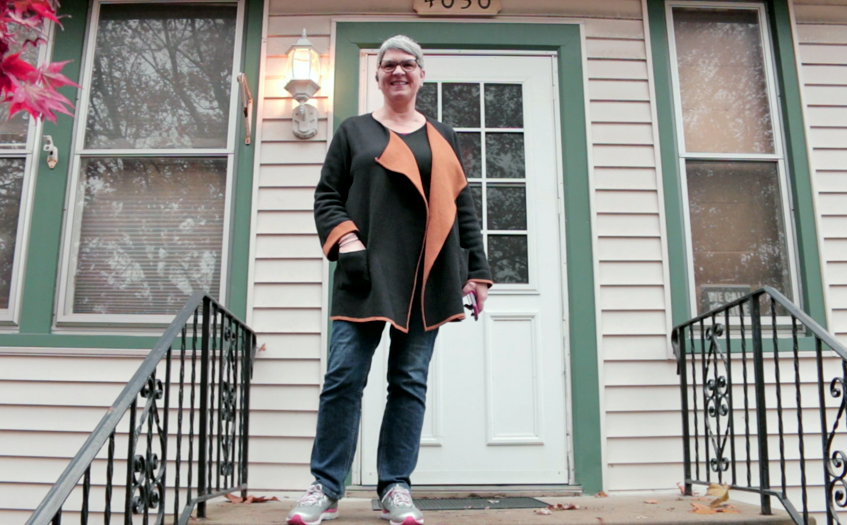 Jeanne Cuff was born and raised in New Jersey and Pennsylvania but has lived in Chicago for more than 30 years.

Although Cuff grew up in a semi-rural area, her family didn’t have any livestock, so, she says she was surprised at how much livestock she saw in Chicago.

“He was bartending and he carded me,” she recalls with a laugh,

Carr has written several plays for the Prop Thtr including Busted City, which tells the story about the election of Mayor Harold Washington. The play was later was made into a movie.

Cuff has lived in Portage Park for more than 20 years, and says she loves it for a lot of reasons. But one is the Olympic-size Portage Park outdoor pool.

“When I saw it, I thought I need to be by that pool,” says Cuff, a self-described swimming fanatic. “It’s the pool [Olympian] Mark Spitz qualified for the ’74 Olympics in. I’ve been in the morning and evening swim group there for more than 16 years. And everybody knows everybody.”

Monica Eng is a WBEZ food and health reporter. Follow her at @monicaeng or write to her at meng@wbez.org