Below are highlights from the conversation.

What are your plans for safeguarding immigrants, refugees and other travelers in Illinois impacted by President Trump’s ban on travel from the seven Muslim-majority countries (that an appeals court put on hold Thursday)? Will Illinois become a sanctuary state? -- Cindy Rayburn via Facebook

Our immigration system in America is broken. Has been broken for years. I believe we should change it. We should be a welcoming society. One of the reasons I love Illinois so passionately is Illinois is a very pro-immigration, welcoming, diverse state. We should always strive to be that in every way that we can.

I hope -- and I’m encouraging members of Congress -- to take up comprehensive immigration reform. We should think about this not on a piecemeal basis. Let’s comprehensively change our immigration system so we’re welcoming to immigrants and refugees.

Sarabia: What do you think of the way that President Trump has been approaching this issue so far?

Rauner: Well I came out and I was clear in my statement: I think the presidential order was overly broad. I believe it was rash. I do not support immigration restrictions based upon religion.

The one thing I did -- and I will stand by it -- I said when ISIS announced that they were working to put terrorists inside the flow of refugees coming from Syria, I said, “Gosh, let’s talk about this for a second. Let’s put a pause -- a short pause -- on Syrian refugees, and let’s together, with our state terrorism task force and the federal government, work together to understand exactly our vetting process for Syrian refugees to try to make sure we do the best we can to keep the people of Illinois safe and deal with this ISIS-stated threat to insert terrorists in that flow.

Sarabia: On the Turnaround Agenda, there are a lot of items on that Turnaround Agenda. It’s really been whittled down. Do you continue to hold on to the key elements of that agenda? And if so, why?

Rauner: There is no one thing, no particular issue that I’ve said has to change as part of an agreement to change our system. There is no one thing, no two things at all that has to happen. What is absolutely essential is that we don’t just keep doing the same thing we’ve been doing for 10, 20, 30 years; deficit spending, job losses, debt borrowing and taxing. Deficit spending, job losses, borrowing and taxing. Unsustainable. Unaffordable.

The system is broken. It’s not working. And we need to send a message to job creators here in Illinois, and around the country and around the world, that I’m trying to recruit to grow more jobs here. That it’s a new day in Illinois. That we’ve turned the corner. Things are fundamentally different.

We can do that in many ways. Term limits would help. Fair maps redistricting reform would help. Property tax freeze would help. Shrinking the bureaucracy and unfunded mandates would help. There are many ways. And I’ve said if you don’t like my recommendations, I’ll do yours but let’s not just keep doing the same thing. 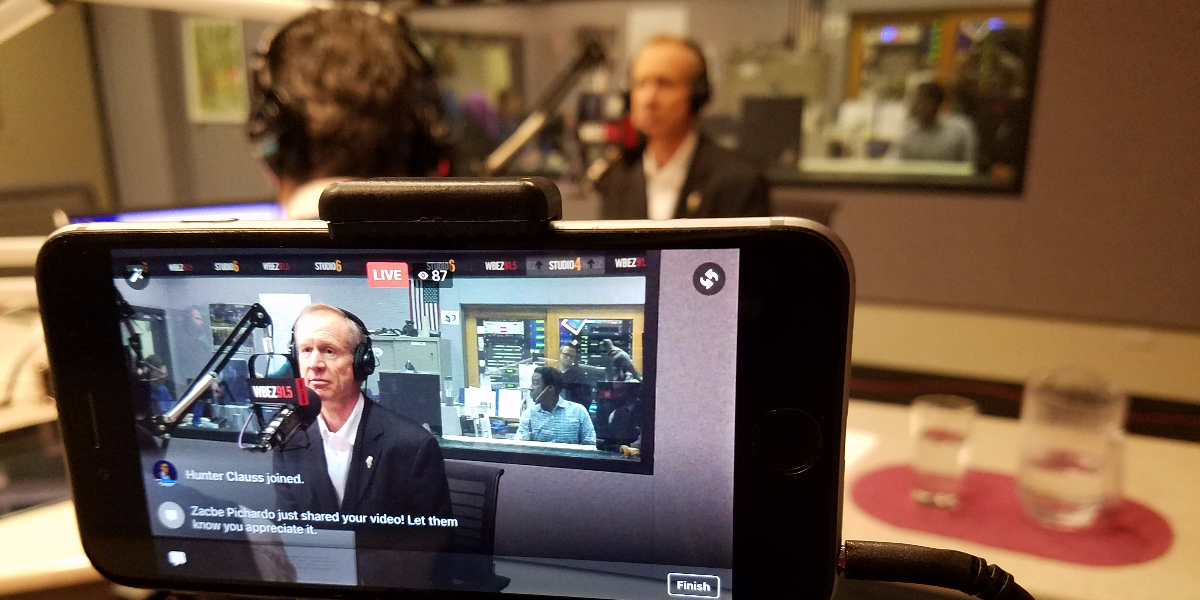 Hi, my name is Beth and I am a speech therapist in Arlington Heights, Illinois, who works in the early intervention program. Because the state remains at a budget impasse, providers like me are relying on a court order to guarantee our payment for services. Unfortunately, despite the court order, because the state does not have sufficient funds in the bank, many providers are having difficulty receiving consistent payments from the state, now being about 11 weeks behind. Can you, Gov. Rauner, commit to fully funding a vital program that affects so many therapists, children and families in Illinois? -- Beth from Arlington Heights

Rauner: I am so frustrated and it’s so sad and so unfortunate that we are not supporting our most vulnerable and those in need with early intervention and the other services that they need.

Prior to my becoming governor, we had not been paying our bills promptly. We had not been funding our human services adequately. And we had billions and billions of dollars in unpaid bills, just as we do today.

We want to have a caring, compassionate service support network for our most vulnerable in Illinois. That’s what we’re working to achieve.

In order to do that, we need to have balanced budgets, and to do that -- we can’t and shouldn’t try to cut our way out of our budget problems. That’s the wrong answer and I’ve said that repeatedly.

Sarabia: So is it a combination of cuts and tax increases?

What’s clear is we can’t cut our way out and shouldn’t try to cut our way out. That would be wrong. Morally, for the exact reasons that are being raised this morning. We cannot tax our way out of these problems. We cannot continue to put more and more tax burdens on our small businesses and job creators and our working families. We already have the fifth highest tax burden in America and the highest property taxes in America. We’ll just destroy our economy and push more jobs out.

The answer is we need to grow. We have to be competitive so we can afford to be compassionate. We’ve got to grow more jobs and expand our tax base. Then we’ll have the money to balance budgets and we’ll put our money in our human services.

Sarabia: As you know, Attorney General Lisa Madigan filed court papers telling a judge that state employees should not get paid until there is a budget. Say the judge agrees. What happens?

Rauner: I hope that the attorney general did not time this lawsuit to stop state worker pay because the senate is on the verge of grand compromise. I hope that’s not why she’s doing it. I hope it’s not to force a crisis, to force a stopgap and a tax hike without any changes. That would be unfortunate. If this was the right thing to do by the attorney general, she could have filed this lawsuit 18 months ago or at any time since. She’s timed it right after the (state) Senate was announcing that they’re working on this compromise.

Couple of things: State employees work hard everyday. They do a great job. They’re showing up. They’re getting things done. They deserve to be paid no matter what.

The General Assembly passed a bill to give themselves their pay in a continuing appropriation, even if there was no budget. The General Assembly did it for themselves. They haven’t and they won’t -- so far -- do it for state workers. This is wrong, it’s unfair, and I have fought -- and former Comptroller Munger fought -- to make sure state employees get paid no matter what. They deserve it. They’re doing their jobs.

Sarabia: If the judge agrees with Attorney General Madigan, what’s your recourse? What happens? If in fact state workers don’t get paid, are we looking at government shutting down?

Rauner: Here’s the key point: If Attorney General Madigan is successful in trying to get that court order away (that forces) state employees to continue to be paid -- and I hope she’s not successful, because I’ve argued on the other side -- but if she is successful, all that means is then Comptroller Mendoza has the authority to decide whether to pay them or not. Doesn’t mean she can’t. She can decide she’s not forced to. I hope Comptroller Mendoza decides to continue to pay our state workers.

This interview has been edited for clarity and brevity. Click ‘play’ above to listen to the entire segment.

How irresponsible and unethical for the governor to keep repeating the falsehood that I or any state official can break the law and spend taxpayer money without appropriation authority or in defiance of a judicial order. No one – least of all the Governor – knows what the judge will do with the Attorney General’s filing.

Like President Trump, Governor Rauner shows no respect for the Constitution, separation of powers, or the courts. The Governor needs to read Article 8 of the State Constitution, which spells out his duties and limits when it comes to the state budget and spending:

“The Governor shall prepare and submit to the General Assembly, at a time prescribed by law, a State budget for the ensuing fiscal year … The General Assembly by law shall make appropriations for all expenditures of public funds by the State.”

“The State … shall incur obligations for payment or make payments from public funds only as authorized by law...”

Governor Rauner can try to bully me into breaking the law as many times as he wants – I refuse to break the law. A better use of his time would be to do his job per the Constitution and introduce a balanced budget for the General Assembly to then act on.