Amy Terpestra is a social researcher who lives in Chicago’s Bronzeville neighborhood. Last year while driving home through the South Loop, she was struck by a change in the retail landscape that’s been brewing for a while now, but one that she had just suddenly noticed.  With no small amount of indignation, she asked Curious City about it:

Amy’s bothered by more than just the sheer number of stores; it’s more that their presence suggests a business model that appears to defy basic economics. Here are her observations:

For answers, we talked to front-line retailers, analysts, and industry executives. The bottom line: The likely culprit behind mattress stores’ surge in visibility in Chicago is that we’re collateral damage in a mattress war raging at the national level. And, Amy, you’re probably not going to like this: Chicago, like the nation, has yet to hit peak mattress.

An industry wakes up

The mattress war has transformed an enterprise that was once sleepy and predictable into one that’s on a clear upswing, with a rise in advertising, higher sales, and more stores. That is, there’s been a nationwide boom in the world of stand-alone mattress retail.

According to Dave Perry, bedding editor for the trade magazine Furniture Today, the majority of mattress purchases were once made inside department stores and mom-and-pop furniture outlets. Today, the specialty mattress chains have more than 50 percent of the market, compared to just 19 percent in 1993. 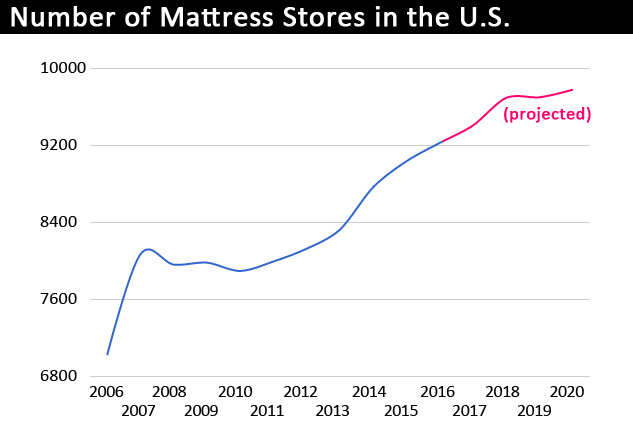 Perry, analysts and other industry-watchers list a few reasons for the ongoing trend:

That, he adds, is why a single store can get by on just a few customers a day. Plus, each store — complete with a big, bright sign on its exterior — doubles as advertising.

Since 2007, Houston-based Mattress Firm has been on a national buying binge, taking over 17 mattress retailers, including Bedding Experts and Back To Bed. Its acquisition of major competitor Sleepy’s, completed in early 2016, brings its total store count to nearly 3,500 in 48 states — almost one-third of the market. That nearly doubles Mattress Firm’s footprint in Chicago to 237 stores.

“When that consumer says, ‘I’m fed up, I can’t sleep on this bed any longer,’ we want them to think, ‘Hey, there’s a Mattress Firm right over there,’” Woods says.

Of course, as we’ve seen, there are sometimes two — or even three — Mattress Firms “right over there.”

Which raises the question …

How long will the mattress boom last?

One way to tell is to look closely at the effect of the acquisitions going on. Is mattress retail necessarily a zero-sum game, where an acquisition tamps down the overall number of stores or sales?

Mattress Firm's Sam Woods is bullish on the trend continuing.

He points to an example when his company took over a competitor’s store in close proximity to an existing Mattress Firm, when he assumed they would close the weakest location.

“Well, what happens is that often those two stores will both improve their performance,” he says. “So, we’re like, ‘Maybe we’ll keep them both open.’”

Woods says that “happy accident’ is a big reason why consumers see so many stores around — even, as Amy pointed out, across the street from each other.

But not everyone shares Mattress Firm’s enthusiasm for opening multiple stores near each other.

“It seems like [Mattress Firm’s] whole philosophy is to put ‘X’ amount of stores around our stores,” says Michael Kenna, president of American Mattress, which has more than 100 stores. “It doesn’t mean if you open up more stores you’re going to do more business.” 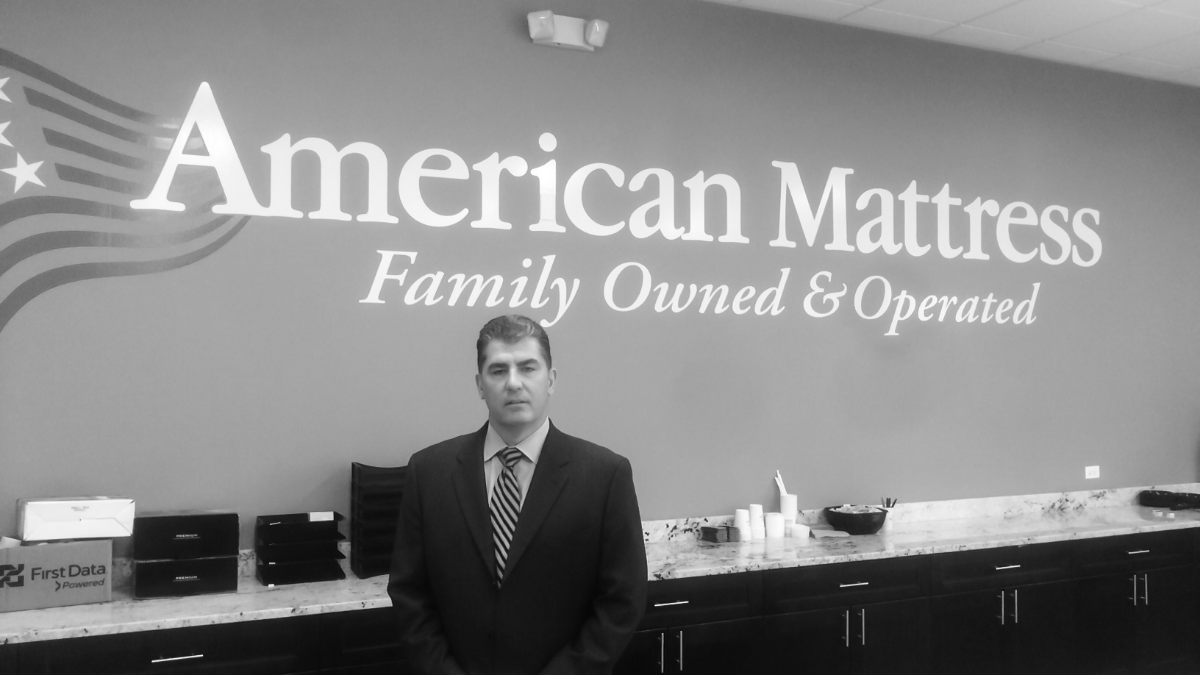 During a recent visit to its Addison, Illinois, headquarters, Kenna proudly shows off their giant warehouse.

“Seems like every seven years or so we have to move to a bigger facility,” he says.

But Kenna’s cautious about flooding an area with too many locations, pointing to other chains that grew quickly and went out of business. Others were acquired by the competition.

A 2015 industry report from IBISWorld suggests that, in fact, the number of units sold peaked a few years ago. But that same report notes that because of an increase in premium mattress sales, the industry’s total revenue has never been higher.

That same analyst projects the U.S. market will add another 700 mattress stores over the next 5 years.

Even with Kenna’s reservations about acquisitions, American Mattress plans to expand. He says the company will add 25 more stores this year “to fill in the gaps.” He says it’s the company’s biggest growth spurt ever.

There may be a mattress store war going on, but for now everyone seems to be winning. 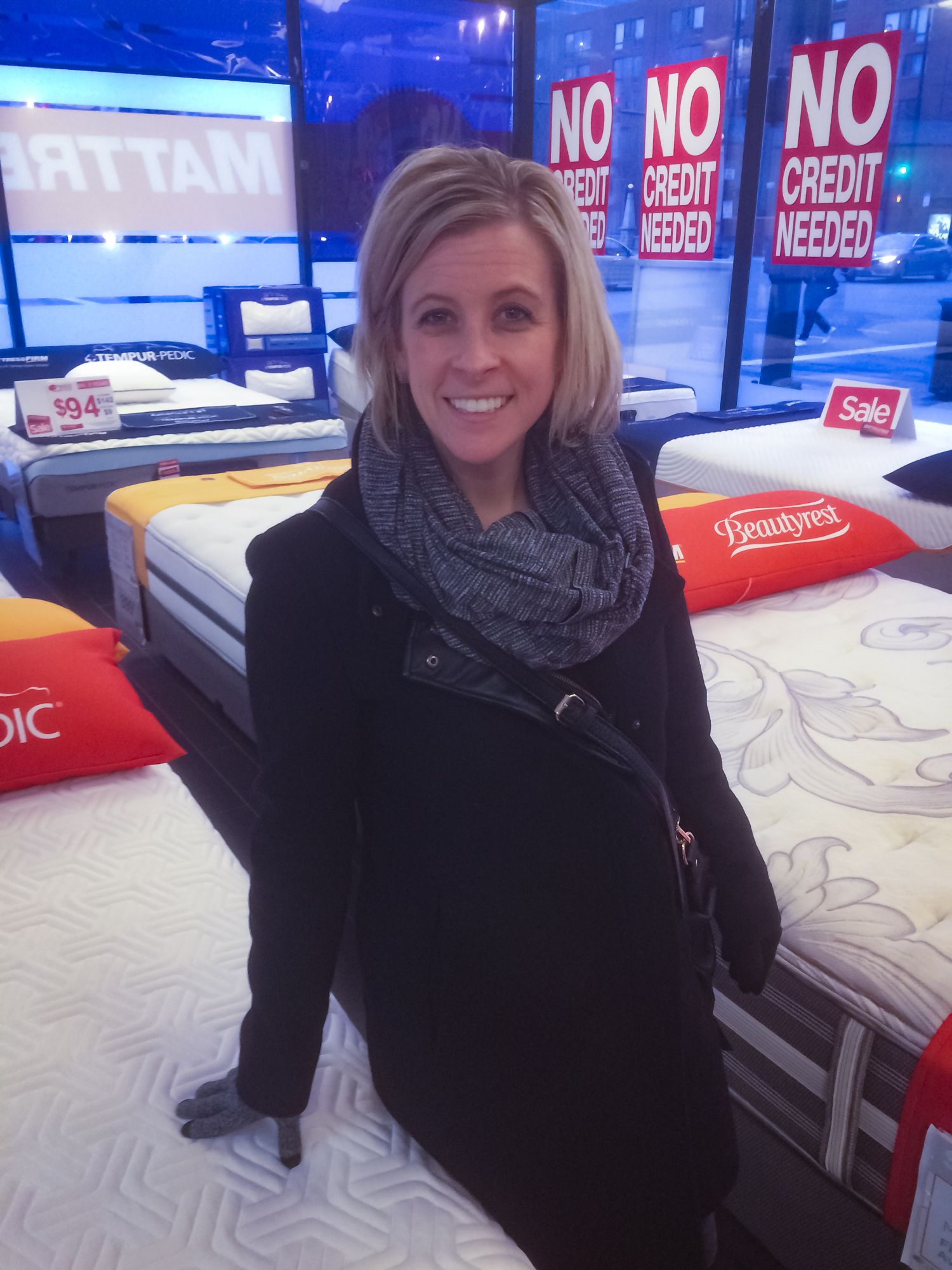 Amy Terpstra is a social worker turned researcher. She submitted her question to Curious City after counting five mattress stores along a stretch of Roosevelt Road between State and Halsted.

After visiting a couple of those stores with Curious City, she’s now considering replacing her decades-old, hand-me-down mattress with a new one.

During one visit, she tried a tempur-pedic, saying: “I feel like I’m cheating on my mattress!”

Correction: An earlier version of this story contained a chart that misrepresented the projected number of mattress stores in the U.S. by year 2020. The correct upper limit lies between 9,000 and 10,000 stores.