That’s kind of how Liz Hansen was feeling when she and her family moved from Ann Arbor, Michigan, to Evanston about four years ago. Having grown up in the Washington, D.C., area, Liz was used to being near an ocean and beaches. To her, beaches pretty much made life worth living.

She didn’t know too much about the Chicago area, but in her mind, it was just a concrete jungle on a lake.

Nonetheless, the day they moved in, Liz took her two young daughters for a stroll ... and that’s when she saw it: Evanston’s big, sandy Lee Street Beach.

In a matter of hours, Chicago went from the most “meh” place ever, to the best place ever.

“I just stayed there all day with the kids; we got sunburned, and my husband did all the moving,” she says.

It was during the sunburning that she noticed something: The sand is fine and smooth, more like what she’d expect to see on vacation somewhere warmer, like Florida.

So she asked us: Is the sand at Chicago and North Shore beaches native to the area or is it imported?

If you live in the Chicago area, there’s a good chance you take our smooth, soft beach sand for granted. After digging up some answers for Liz, I’ll tell you right now: We definitely should not take it for granted. While the sand is entirely native to the area, the lake shore wouldn’t be very “beachy” without some serious human effort to keep it that way.

To start, let’s hit a big point that might not seem obvious to the average beach-goer: Under natural conditions, sand constantly moves along the Lake Michigan shoreline. According to Dr. Charles Shabica, a coastal geologist and retired Northeastern Illinois University professor, “It’s a very dynamic sandy system.”

Imagine we’ve zoomed out on a map of Lake Michigan. In a natural system, we would see storm waves push sand south along the Wisconsin and Illinois shorelines. The sand would stop along the Indiana coast between Gary and Michigan City, where it would pile up to create the Indiana Dunes.

In this natural scenario, the sand doesn’t stay put in Illinois, except for the area now known as Illinois Beach State Park in Zion. Beyond that, we wouldn’t see big, natural beaches with that soft, luscious sand we enjoy today.

Chicago was mostly marshy, but up along the North Shore, we would see thin strips of sand, gravel and cobbles that were eroded out of the bluffs by storm waves. That’s how the beaches looked when the lake level was lower. If it were higher, we wouldn’t see any beach at all.

“That’s what it was like prior to settlement: eroding bluffs, trees sliding down the bluff, and very narrow, ephemeral beaches,” Shabica says. 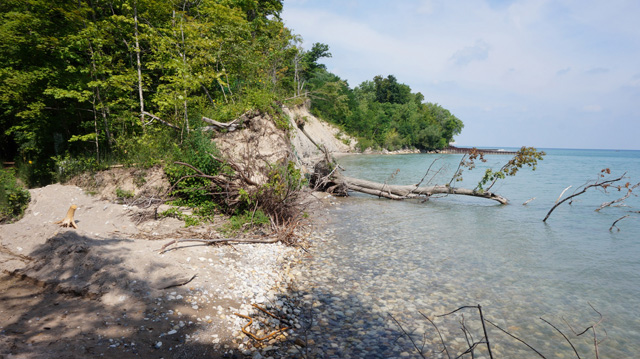 How everything changed with 19th-century development

The beaches we have now, Shabica says, were inspired by an accident, after breakwaters were built to protect the entrance to the Chicago River in the 1830s.

“What happened was, when they stuck out into the lake, the sand that was moving along shore built up on the north side. It couldn’t get around,” he says. “Pretty soon, the entire area that we now call Streeterville was all this sand.”

The same phenomenon happened after the breakwaters for Waukegan Harbor were completed in 1923.

People caught onto this, Shabica says, as they increasingly turned to the lakefront for fun.

“They learned that if you stick something out into the lake, it’s going to build a nice beach on the north side of it,” Shabica says.

And so, people and communities along the lakeshore began sticking piers and steel panels out into the lake to create wide, sandy beaches. Chicago’s North Avenue and Montrose Beaches were among the first in Lake Michigan to make use of these steel piles in the 1930s.

But after several decades, these structures didn’t work so well. “The beaches went away,” Shabica says.

As communities trapped sand for beaches, those further south were deprived of sand that would have otherwise drifted their way. At the same time, communities had been building bulkheads, seawalls and other erosion control structures in the lake to protect the bluffy stretch of shoreline that their homes and buildings sat upon. Breakwaters and landfill extended the Chicago lakefront from Michigan Avenue nearly all the way to its present-day location to accommodate the Illinois Central Railroad.

These structures cut erosion and lowered the amount of sand moving throughout the system.

Today, the Illinois shoreline is almost completely “hardened.” So much so, Shabica says, that if you put a steel pile out into the lake, it wouldn’t catch enough sand to create a beach.

Well, if there’s not enough sand in the Illinois shoreline system, what gives with Liz’s nice, sandy beach and the rest of them, too?

Two things. The first is engineering.

Shabica recently created a private beach in Highland Park. To pull it off, his team dropped quartzite boulders in the water, forming a rocky crescent. That formation makes sand stay put. 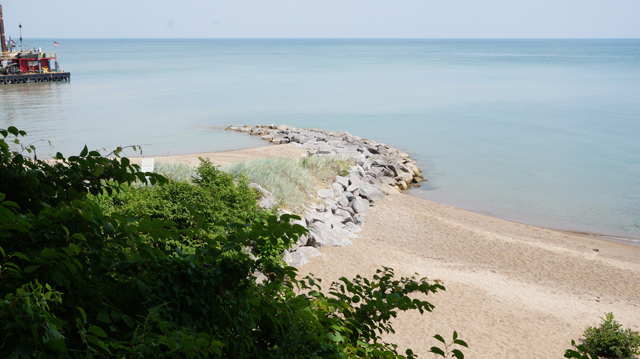 But — and here’s the secret ingredient — his team dumped sand into the beach, too, to make it look like a miniature resort in a jiffy instead of taking years or even decades. (Notably, the state requires new sand-holding structures to be over-filled with sand, to ensure areas south of it will receive sediment.)

The second ingredient is imported sand.

Shabica says when the glaciers retreated 14,000 years ago, they bequeathed future beach-goers a gift.

“Most of Illinois was blanketed by about a 10-foot layer of sand, so we have all of this great glacial sand that we can get from inland,” he says.

This is what private property owners and many municipalities use when they replenish their beaches today: They pull it from inland sand pits in Antioch, Waukegan, Milwaukee, and other areas close to Lake Michigan.

We have so much sand in these sources, Shabica says, that we won’t have to worry about running out for another 3,000 to 4,000 years.

The City of Chicago has actually been engineering its beaches and managing its sand for a while now. Again, its original beaches were inspired by the accidental ones created north of the breakwaters that protected the entrance to the Chicago River. But, says Chicago Park District Planning Supervisor Julia Bachrach, the city spent much of the 19th century driving large timber piles into the bedrock beneath Lake Michigan, filling it in with stones and adding soil and sand at the top layers. In the 1930s, Chicago's North Avenue and Montrose Beaches were among the first in Lake Michigan to make use of steel piles. Some of the sand in Chicago's beaches was mined from the bottom of the lake from Chicago and Indiana. 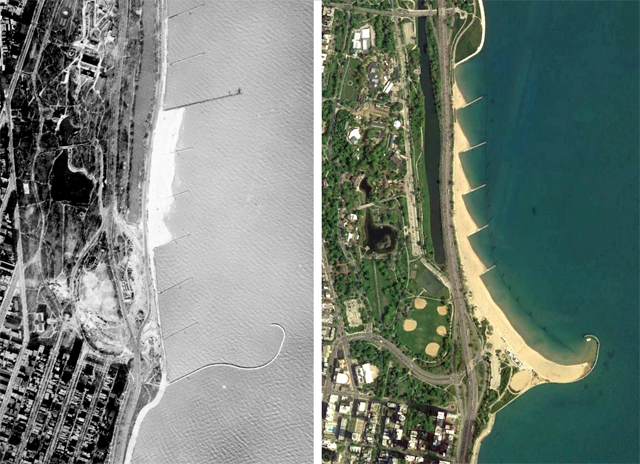 To recap: A good amount of the sand on our beaches came from eroding bluffs along the shoreline. Another big chunk of it was imported from inland sand pits around Illinois and Wisconsin. Some of Chicago’s sand was dredged from the bottom of the lake around Chicago and Indiana. Liz’s answer, then, is that we do ship in sand sometimes — just from the good ol’ Midwest, not Florida.

Lake Bluff taxpayers pay between $10,000 to $20,000 trucking sand to the village each year. For a community of less than 6,000 residents, that’s not an easy cost to shoulder.

Rising lake levels compound the problem. Lake Michigan has risen four feet since the beginning of 2013, and it’s submerged many beaches along the shoreline, accelerating their erosion. Evanston’s dog beach was one of them, forcing the city to delay its spring 2016 opening.

North Shore communities have been working to find regional solutions to their sand management woes. An intergovernmental initiative called the Sand Management Working Group, was funded by a grant from the Illinois Department of Natural Resources.

Ethan Theuerkauf, an Illinois DNR coastal geologist, says rising lake levels and minimal sand are probably the biggest concerns for most communities involved. But, he says, the current situation could kick-start some much-needed planning.

“We have high lake levels now, and it's a problem. ... Then, it goes back down, and we think we have wide beaches, and there's no concerns,” Theuerkauf says. “They still exist.”

Theuerkauf says the lack of sand has led to trouble beneath the lake’s waters, where we can’t see it. The nearshore area’s clay lakebed has been stripped of protective sand, causing waves to cut deeper into the lake bottom. That leads to more violent waves, and the deterioration continues. Scientists say that lakebed sand is irreplaceable.

This, of course, threatens beaches.

The problem, Theuerkauf says, is that the public doesn’t see a direct impact right away, so sand management falls off the radar year after year. That’s despite the fact that communities will encounter severe erosion around the same areas every few decades. For example, Theuerkauf can point to articles detailing concern about erosion of the path near Chicago’s Lake Shore Drive; one article’s from the ‘80s, and another was penned in 2016.

“The lake level had been higher than it is now, but very close. And the stories are the same,” he says.

Theuerkauf wants things to be different this time, though. One small step is to map the lakefront’s sand distribution and thickness using “helicopter-based electromagnetic surveys.” That project will be funded by the National Oceanic and Atmospheric Administration.

“If we understand everything ... maybe we don’t have to ship the sand in. Maybe there’s a more sustainable engineering solution,” Theuerkauf says.

But really, a big part of this is getting North Shore communities along the Lake Michigan shoreline collaborating on regional solution. Because up until this point, they’ve been addressing their own problems without thinking about how it affects the system, as a whole.

Let’s hope this works, because Liz’s ability to live here depends on these beaches. In fact, they’re the reason she tells her husband they can keep living here. 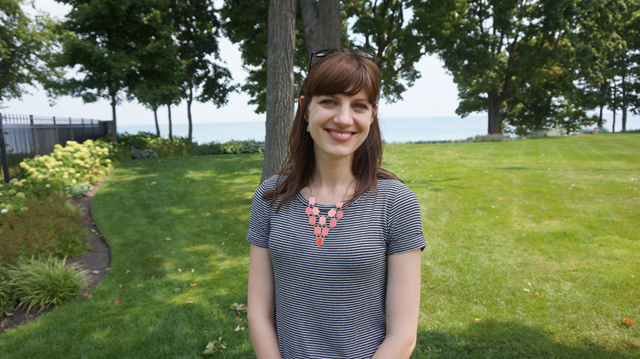 Liz Hansen is a professional photographer who gained some notoriety after this amazingly awkward family photo went viral, and was featured on “Good Morning America.” Note that the photo is on a beach — she loves those. Liz grew up in the Washington, D.C., area, and spent many-a-summer going to Virginia Beach and the Outer Banks. So she was surprised to find that Lake Michigan beach sand was just as luxurious. But how could it be? It’s just lake sand, after all … .

She joined Curious City on a mini adventure to a couple of North Shore beaches to learn what makes our region’s Lake Michigan shoreline tick. She was surprised to learn that ... *drum roll please* ...our beaches are both natural and unnatural. While the sand is entirely native to the area, our shoreline wouldn’t be very “beachy” if we didn’t engineer them to be that way.

While these engineered shorelines do come with some baggage, Liz is happy to know at least one scientist is dedicated to keeping ‘em going strong: Dr. Charles Shabica.