Ever since Kevin Schramer started playing pinball in the 1970's, he noticed that many machines listed their manufacturing addresses in the Chicago region. The addresses have kept him wondering for decades, so when he learned about Curious City, he just had to ask:

Why was the Chicago area home to all the major pinball manufacturers during the heyday of pinball?

After digging into relevant history books, interviewing industry experts, and emptying plenty of change into the area’s remaining pinball machines, we can firmly say that Kevin’s on to something: From the modern pinball industry’s Depression-era beginnings, to its modest market presence today, Chicago has been pinball’s center of gravity. (The Internet Pinball Database lists 554 top-rated pinball machines and at least 98 percent of them were made in the region.) But the answer as to why involves an interplay of history, geography and art.

To say Chicago was the hub of the pinball industry isn’t to say that the game was invented in the Windy City. Historians trace early pinball machines to a centuries-old French billiard game called bagatelle, while the modern coin-operated pinball industry got its start in the early 1930s. During the Great Depression, many people were “out of work, looking for inexpensive entertainment for a penny,” explains pinball historian Roger Sharpe. Enterprising tinkerers and businessmen began to fill that need with simple countertop games.

In these early days, many of the industry’s key players were travelling businessmen such as David Gottlieb, whose machine Baffle Ball was one of pinball’s first big hits. Baffle Ball was a simple game. There were no flippers, lights, or bells; you just pulled the plunger back and hoped that the ball bounced into the right hole. Gottlieb moved throughout the Midwest to sell his machines, but his operation was based in Chicago.

Many of pinball's now-familiar qualities, such as replays and tilt mechanisms, were considered whiz-bang when they were first developed by engineer Harry Williams in the 1930’s. Williams got his start in California, pranking his business partners by adding electricity to his machines and connecting the games to telephones; in some cases, the right shot would make the phone ring. Once the ringing machines proved to draw more money than their silent counterparts, machines with sound-making elements became the norm. While Williams tried working from California for a while, he eventually decided that he would need Chicago's competitive edge if he wanted to make a name for himself in the pinball industry. 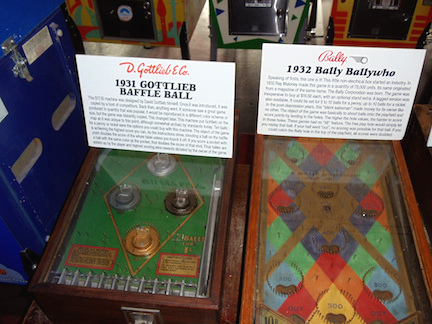 Chicago had a lot to offer the budding industry. Raw materials were widely available, including lumber and wiring, as well as steel from nearby Gary, Ind. The city's large immigrant population became the basis of the factories' work force. Once the machines were finished, the city's railroads made them easy to distribute across the country, and Lake Michigan's ports allowed the machines to be sent around the world as pinball found a market overseas. David Gottlieb and Harry Williams founded some of the industry’s most successful companies in Chicago, and named the firms after themselves.

Multiball! Artistry in the industry’s heyday

Through the decades, the pinball industry had its highs and lows. From the 1940s through most of the 1970s pinball was officially banned as illegal gambling in many of the nation’s big cities, including New York City and Chicago. (Roger Sharpe, our historical guide, played an instrumental role in overturning the bans with a skill shot that became the stuff of pinball legend.) Although the bans were lightly enforced, they kept the industry from achieving its full potential. Then, in the mid-1970s, the bans were lifted, and The Who’s pinball rock opera Tommy was made into a major motion picture. At this point, pinball found a place in the mainstream culture, and the industry entered into a full-blown heyday.

As the industry thrived, the graphic artists who designed the backglasses and the playfields developed a detail-rich pinball aesthetic. While Chicago has many important cultural contributions, it has a unique monopoly on pinball art. The art blended the bawdy imagery of Playboy magazine (based in Chicago at the time) with the garish colors of Riverview amusement park; before it was closed in 1967, Riverview had shared the same neighborhood as many pinball manufacturers.

Even Chicago’s weather made it on to some machines. Greg Freres, celebrated pinball artist, worked on the Harlem Globetrotters machine during the notorious winter of 1979 — one of the city’s worst. Freres included a splotch of white paint next to Lake Michigan in honor of Chicago’s snow on the Globetrotters’ globe.

While the industry lost some ground to video game machines through the 80s, it continued to be successful. The most popular pinball machine of all time, for example, was The Addam’s Family; it wasn’t released until 1992.

By the close of the decade, however, pinball was in a verifiable slump. WMS, the corporate successor to the company founded by desinger Harry Williams, lost $4 million on its pinball division in 1998 alone. The company gave its pinball team one last shot to reinvigorate pinball. The team developed Pinball 2000, a hybrid of video games and pinball featuring holographic aliens. Despite the machine’s relative success and a promo video complete with kooky narration from Chicago radio legend Ken Nordine, the corporate bosses at WMS shut down their pinball division to focus on growing profits in the slot machine industry. By the dawn of the 21st century, only one manufacturer of pinball machines remained in Chicago, and the world.

But pinball didn’t end there. That last company, Stern Pinball, continues to develop and manufacture pinball machines in west suburban Melrose Park. (A New Jersey-based company just released a Wizard of Oz pinball machine, but Stern is the only company that regularly releases new machines and distributes them widely.) Company CEO Gary Stern has been in the pinball industry since he was a small child accompanying his father, a business partner of Harry Williams, on factory visits. While the access to materials, labor, and distribution that made Chicago an ideal location for pinball’s beginnings remain, Stern says another element is keeping the surviving industry here.

“We’re here, because we’re here,” Stern puts it plainly. That is, a community of pinball designers, engineers, and specialists live in the Chicago area, and many of them remain dedicated to the pinball craft. 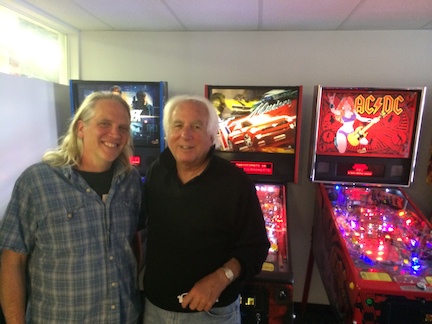 Jim Shird is one of those specialists working at Stern. He has designed the wiring in pinball machines since the 1990s and has been playing pinball since he was a kid, when he would win free pizzas every week from a local pizza place’s pinball competition.

Pinball’s popularity has diminished to the point where it’s most visible in the shadowy corners of dive bars. But still, Shird remains optimistic. These days, when he finishes work at Stern, he heads straight to Logan Arcade, one of Chicago’s many new arcade bars, to maintain (and play) the bar’s pinball collection.

He is, after all, a pinball person and he gets to spend his life with pinball machines.

(Want to play pinball? This map includes all Chicago area venues with 3 or more pinball machines. More information is available at PinballMap.com.)

Our question comes from: Kevin Schramer 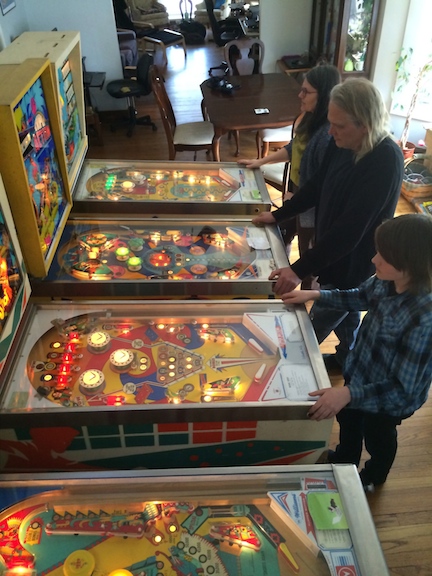 This story about Chicago pinball begins with our “Player 1,” Kevin Schramer. Kevin says he’s loved the colors and sounds of pinball since he was a kid in the 1970s. He first saw pinball at Funway, a family entertainment center  in west suburban Batavia.

“If you had a pocket full of quarters you were all set,” Kevin remembers.

Today, Kevin no longer needs quarters; he has a row of four vintage pinball machines in the dining room of his home in Winfield, Ill. His family plays the machines too, and he is currently in the midst of an extended battle with his sons over his machines' high scores.

Mickey Capper is a freelance audio producer. Follow him @FMcapper