Jim Cascino came of driving age in Illinois, and went through a rite of passage for all drivers: waiting in line at the DMV, the Division of Motor Vehicles. (In Illinois this is technically called the Driver Services Department of the Secretary of State's office. But we’ll be using the vernacular, which, let’s admit, is “DMV.”) But over the years, as Jim renewed his driver’s license, it wasn’t the long lines, harsh lighting or sterile ambiance that left an impression. Instead, here’s what kept gnawing at the back of Jim’s mind:

Why are there so many portraits of Jesse White in Illinois and specifically Chicagoland DMVs?

Admittedly, this political question may not be the most timely: There’s an unprecedented standoff happening right now in the statehouse between Illinois’ newly-elected Republican governor and its Democrat-led legislature; the streets of Chicago have been repeatedly filled with demonstrators; and, there’s a dramatic race for president happening right now, too.

Regardless, I can’t pass up this excuse to look into Jesse White — or, more specifically, look into Jesse White’s eyes in his portrait that  apparently hangs all over the place. He's had a 40-year run in politics, he holds a coveted statewide office and he commands a powerful political operation in Chicago and beyond. The political reporter in me is particularly interested in looking at how a real politician ticks. Is this small, but notable detail concerning the portraits just about ego? Is it based on something practical? Or, does it boil down to plain politics? 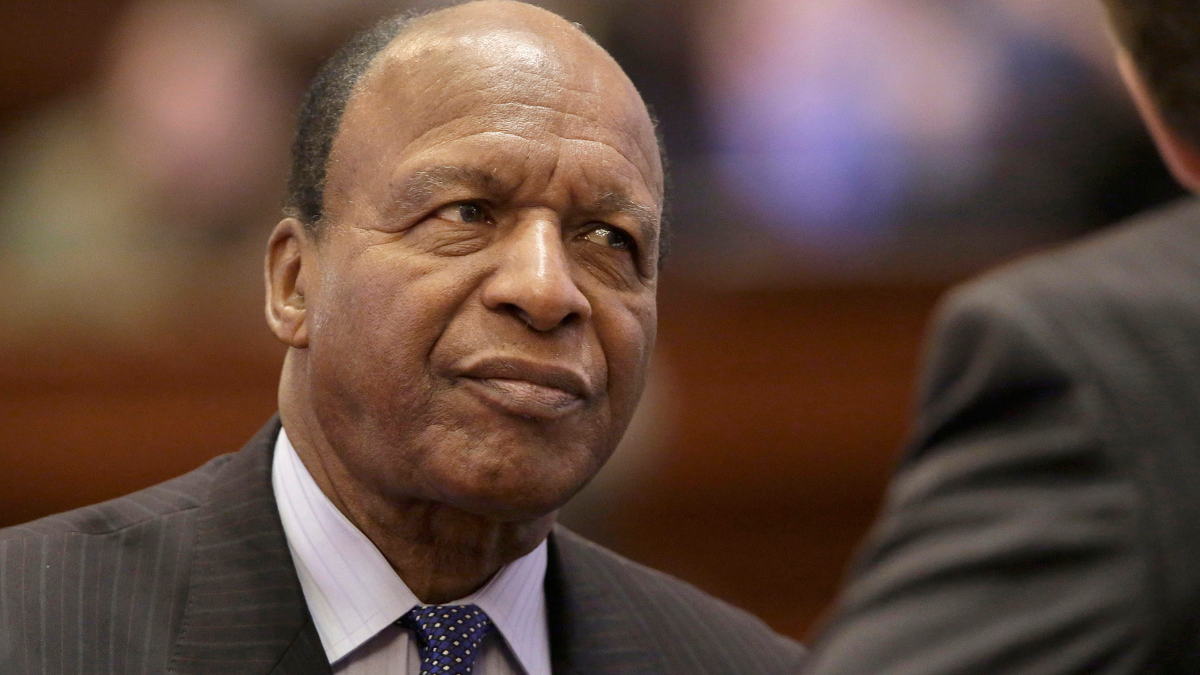 Jesse White, 81, is inarguably one of the most popular politicians among Illinois voters. He’s been re-elected Secretary of State five times. In most of those elections, he’d won around two-thirds of the vote, which is a huge margin of victory for a statewide officeholder. The Secretary of State office issues auto licenses, renews car registrations and manages the organ donor program, among other duties. It’s no accident that, as Secretary of State, White’s name appears on every Illinois-issued driver’s license. (If you’re in Illinois, take a look at your own license for reference).

White’s biographical story plays out as a drama. He was drafted to play in the minor leagues for the Chicago Cubs before being drafted by the U.S. Army in 1957. After that, White attended Alabama State College (now Alabama State University) and, before graduating in 1957, he had had the opportunity to see Dr. Martin Luther King Jr. speak. When White returned to Chicago, he formed The Jesse White Tumblers, a tumbling program for youth growing up in Chicago. (That’s another story, and we encourage you to ask us about it here.)

Not only that, White is known for being a blunt talker when it comes to Chicago politics. Here’s a quote that stands out in my mind. A few years ago, a state representative that White had supported was criminally charged — and later convicted — of taking a $7,000 bribe. As far as Chicago corruption schemes go, $7,000 is not exactly a lot of money. During a campaign in which the bribe-taker was running for re-election, White supported a political opponent of the person accused of taking a bribe and said: “Someone told me that when you take money, make sure you take enough so you can afford a lawyer.”

Jim Cascino says he knows Jesse White less for being a politician and more from memories of the Jesse White Tumblers coming to perform at his grade school. Anything else from White’s biography, Jim wasn’t familiar with. But the more he talked about seeing multiple portraits at multiple DMVs in Chicago’s suburbs, including Schaumburg and Lombard, the more he started to wonder about the politics of it. In each of the DMVs, he hadn’t seen just one or two portraits of Jesse White on the wall.

“At the one in Schaumburg specifically, there are two that are almost looking at one another from across the room and I thought it was so weird how they’re on basically every single wall,” Jim says. “It’s really, like, reminiscent of Mao-era China or something in the Soviet Union to see that many pictures of one person at an office like that.” 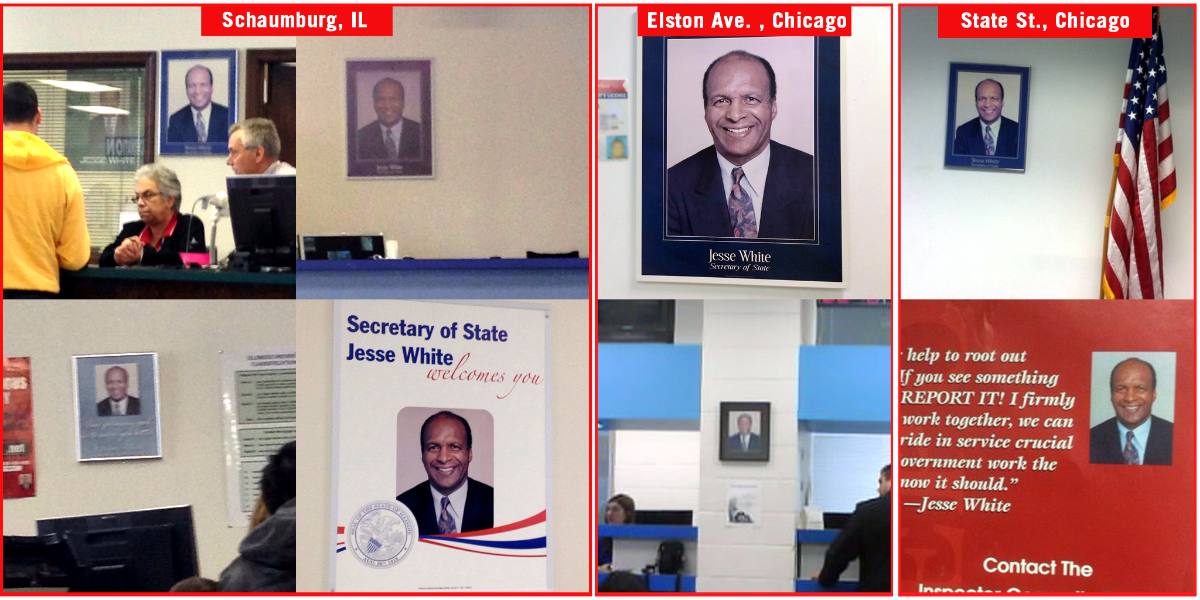 I check Jim’s numbers out for myself. I find eight portraits of White hanging on various walls of the Lombard DMV, including one portrait that’s flanked by two small American flags, making for a very patriotic scene. In Schaumburg, I count seven portraits, plus a small photo of White set on a counter. All in all, Jim’s numbers aren’t all that exaggerated.

Answers from the man himself: Are all these portraits excessive?

And right off the bat — right when the two shake hands — the ever-charming Secretary of State has Jim Cascino right where he wants him:

WHITE: Is that Italiano?

WHITE: Heeeey, Jess Bianco with the linguini, with the calamari sauce ...

JIM: That’s a good one. You sound just like my grandpa. 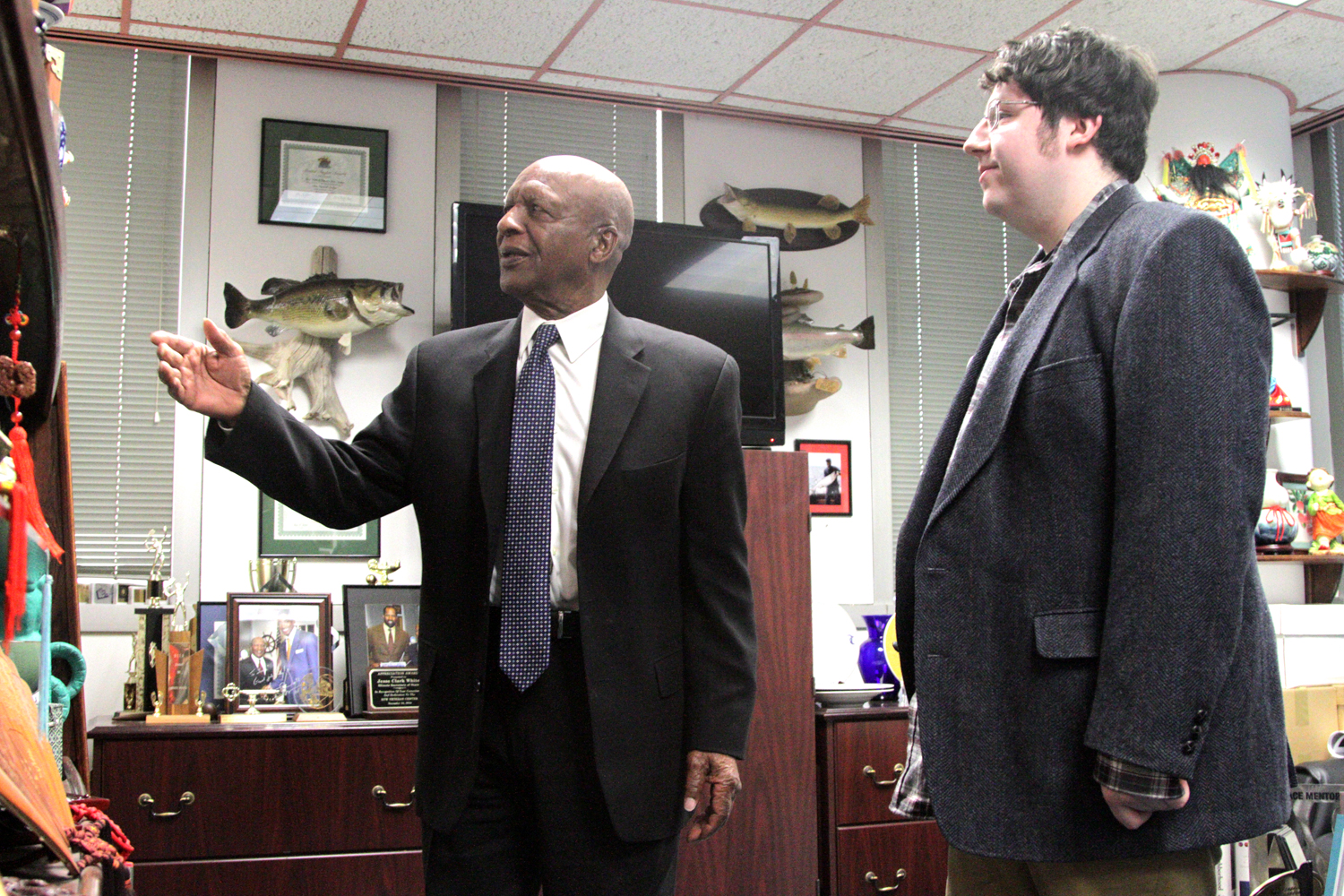 But when it comes time for brass tacks, White has several reasons as an answer to Jim’s question.

So when a new Secretary of State comes in, it’s out with the old portraits and in with the new.

White recognizes, though, there are multiple photos of him at each office location. As for exactly how many, he says there are 138 Secretary of State facilities in Illinois. Each has at least one, but some have more, because White draws a distinction between the side of the DMV where someone would renew their driver’s license, and the side where someone would get their license plate or take a driving test.

But as for why there’s a tradition of political figures posting their own portraits around the state at all — even one — White says, that’s got him beat.

“Years ago, the president of the [Cook] county board, George Dunne, who happens to be my godfather, his name was on all of the signs in the forest preserve district,” White says. “We’re just following tradition. We didn’t reinvent the wheel. We didn’t start something from scratch.”

That’s true, says Chris Mooney, the director of the Institute of Government & Public Affairs at the University of Illinois. The tradition of public officials putting their image goes back decades, if not centuries.

“It’s related to name recognition. It’s all thought of good PR,” he says. Mooney equates the portraits of White on the Secretary of State’s walls to politicians putting their faces on coins. The general phenomenon is not unique to Illinois or even politics at large.

Regardless of how all this started, White says he expects his successor to keep the tradition alive. And Mooney expects the same.

“You think of something like Secretary of State, people don’t know who they are,” Mooney says. “Jesse’s a bit different because he’s well-known and well-loved. Even governors want people to know who they are.”

White says he’s got another reason for the sheer quantity of photos, and it isn’t just “that’s-how-it’s-always-been.”

You might call this other reason a political strategy. White calls this reason good customer service.

“They can look at the person who’s in charge of the office and if they want to throw darts, they do that if they so choose,” White says. “But the bottom line: It’s the law of association.”

Translation: Jesse White is proud of the DMV, even if the DMV has long had a reputation across the country of being a place customers dread.

White’s thinking is, if customers have a good experience at the DMV, then maybe they’ll have a good impression of Jesse White. And maybe even vote for him. White sees smiling portraits of himself as a way to hold him accountable to customers. Oh yeah, and voters, too.

Next steps for Jesse White, the man and the portrait

Regardless if you buy Jesse White’s noble account of why there are so many portraits of him or not, his facial recognition likely amounts to loads of name recognition. Given that, it’s fair to ask why White hasn’t followed in the footsteps of his predecessors and used the Secretary of State’s office to campaign for governor — or any office higher on the ballot than Secretary of State.

Jim thinks Jesse White could set his sights even higher, maybe something bigger than governor.

“He is like an action hero,” Jim says, following his meeting with White. “I mean, the guy jumped out of airplanes, played for the Cubs, had various elected positions. I mean, you could make a movie out of the man.”

But White, who’s been in public office since 1975, says he’s been satisfied with being Secretary of State. And though he’s been on record saying he won’t seek re-election in 2018, White tells Jim and me that the Democratic Party may still draft him for one more run.

Steve Brown, a spokesman for the Illinois Democratic Party, says he’s not aware of a formal movement by the state party to draft White to run for Secretary of State again. But Brown says White’s name is “certainly in the conversation as people think about who should be candidates” in 2018.

“We’d be well-served if he considered to run again,” Brown says.

In the meantime, here’s a bit of breaking news in the political portraits world: There’s a new portrait of Jesse White heading to a DMV near you. Look closely and you might notice the difference.

“I don’t have any hair. I’m the Kojack. The Michael Jordan. The Yul Brynner,” White says, referring to his new look after recently shaving his head for charity.

We don’t know about you, but Jim Cascino and I are ready to tally how many they print. 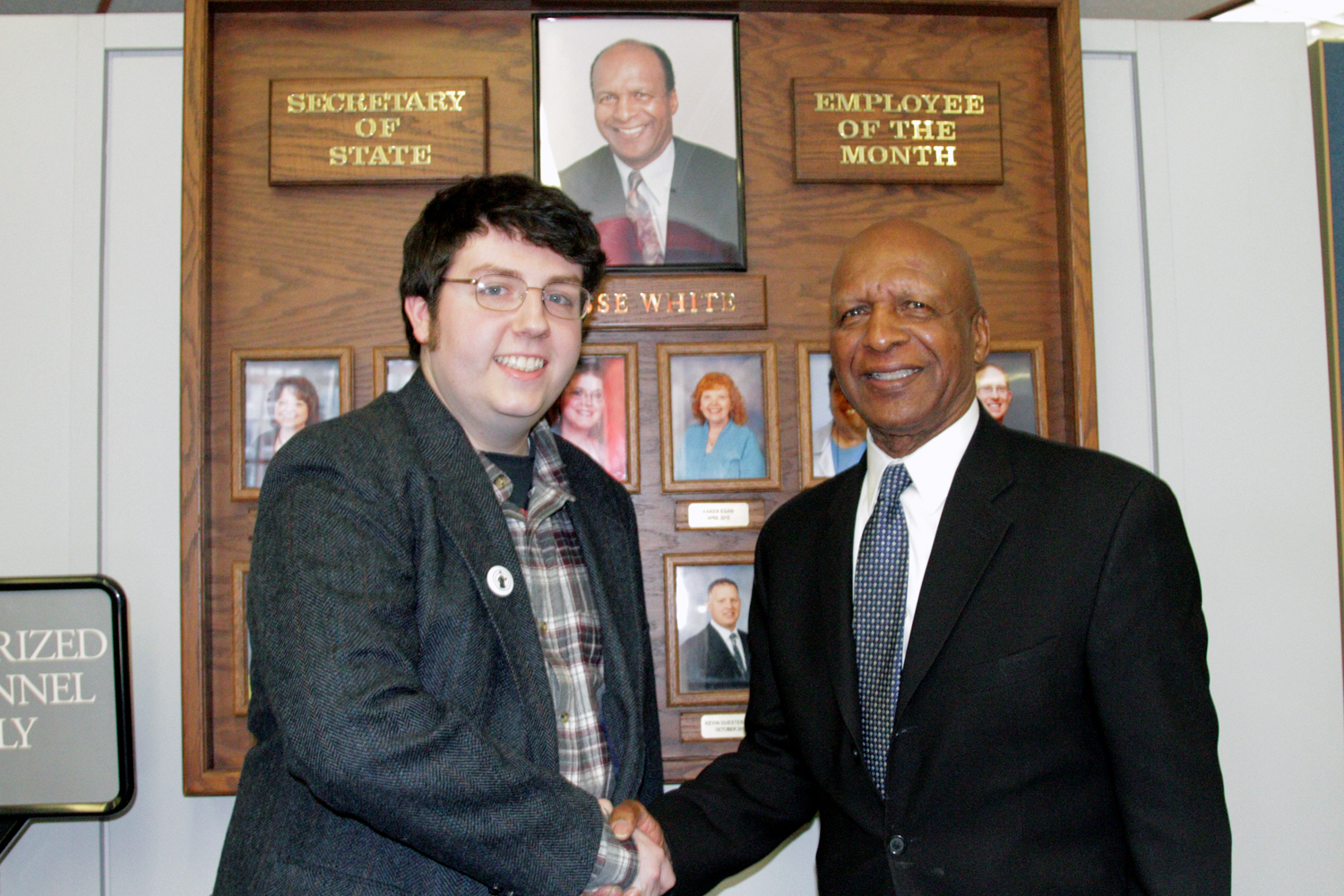 Jim Cascino, 24, lives in northwest suburban Arlington Heights. He works at McDonald’s corporate headquarters as a data assistant, so the company can analyze various trends. Jim is looking forward to renewing his driver’s license when it expires in May 2017. He doesn’t intend on returning to the DMV before then.