Warm weather this week has filled Chicago’s lakefront with bikers and joggers enjoying the outdoors after a record cold April.

But those hoping to use the new flyover path near Navy Pier will now have to wait even longer than expected, and taxpayers could be on the hook for millions more on the perennially delayed project. On Monday, a spokesman for the Chicago Department of Transportation said the flyover is currently slated to open in 2020. After this report was published on Tuesday, CDOT spokesman Mike Claffey called and said city officials are aiming to complete the pathway by the end of 2019.

It was originally slated to open in spring 2018.

Part of the problem with the pathway is that it’s connected to a Depression-era bridge that takes traffic on Lake Shore Drive over the Chicago River. That part of the pathway’s construction “turned out to be more involved than originally expected,” Claffey said.

Last fall, when the city pushed the finish date to 2019, critics complained the project was taking longer than the Golden Gate Bridge, which took just over four years to build. Construction on the Navy Pier Flyover began in 2014.  With this new delay, it will take the city as much time to build the flyover as it took to construct the Channel Tunnel, or the “Chunnel,” which is the underwater passageway connecting England and France. That project was hailed as one of the “Seven Wonders of the Modern World" by the American Society of Civil Engineers.

The flyover path was meant to connect the north and south sections of the Lakefront  Trail, but also to relieve congestion along a narrow section of the path south of Grand Avenue. This patch has long been prone to collisions between bikers, pedestrians, and cars. Last year, the city announced a plan to temporarily help the situation with a bike lane on Lower Lake Shore Drive that was slated to open in spring 2018. But Claffey said that, too, will be delayed until very late this year. 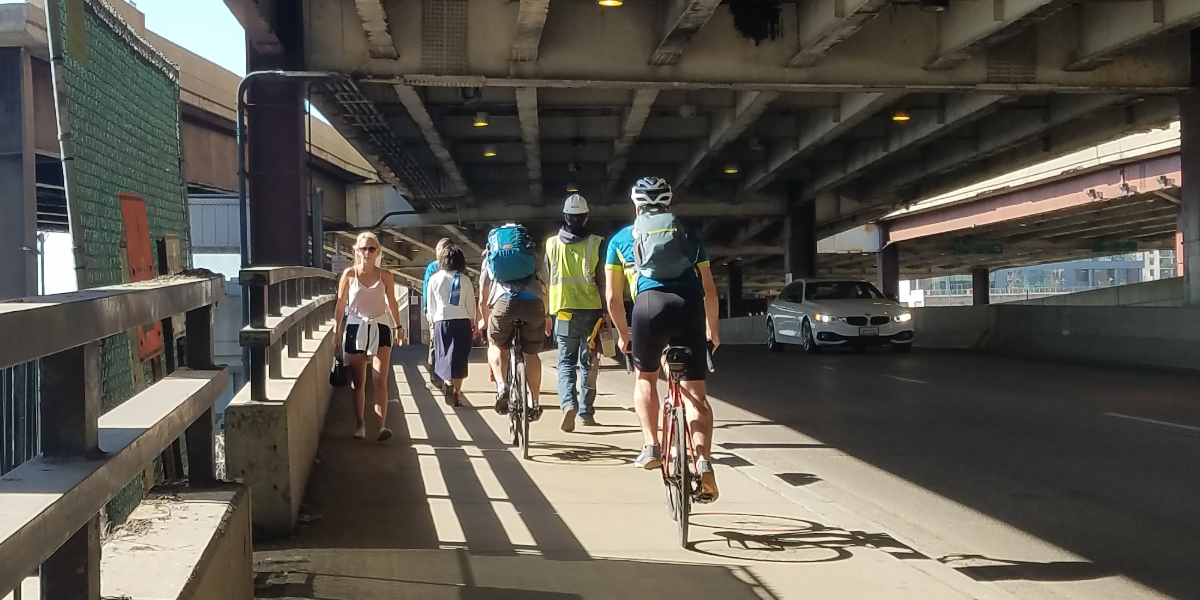 Ron Burke, executive director of the Active Transportation Alliance, thinks the city can do better than that.

“We feel like it’s possible to [add that bike lane] now,” he said adding that the Alliance has been lobbying the city to address congestion in that spot on the Lakefront Trail for 20 years.

These further delays and complications could also come with a higher price tag. When the project was originally pitched in 2011, city officials said it would cost taxpayers $45 million. But when construction started in 2014, that figure ballooned to $60 million. Claffey said the city won’t know what the final cost will be from these new delays until it bids out the third and final phase this summer. That phase was supposed to be bid last winter.