This occasion marks a time of feasting before the Lenten fast — specifically on the jelly doughnuts  known as paczki that are a tradition in Poland. But unlike cultures that celebrate Fat Tuesday, aka Mardi Gras, paczki have their heyday on two distinct days in Chicago’s Polish community.

“By being of Polish extraction and living in Chicago, you get the best of both worlds,” explained Jan Lorys, managing director of the Polish Museum of America, which is located in the West Town neighborhood on Milwaukee Ave., the longtime “Main Street” of Polish Chicago.

Lorys continued, “In Poland, the tradition is that you are getting ready for Lent, which is a period of fasting. So you get rid of all of your animal fats...and make paczki, which are deep fried in fat.”

That happens on the Thursday before Ash Wednesday -- both in Poland and in Chicago’s bakery-filled Polish-American neighborhoods.

“But when you come to the United States, the big thing is Mardi Gras, the Shrove Tuesday before Ash Wednesday,” Lorys said. “So the idea came for having Paczki Day on Shrove Tuesday, combining an existing American holiday with something from Poland.”

That is how most U.S. Polish communities do it, but in Chicago we respectfully observe both traditions, meaning, Lorys said, “that you have them on Thursday, and then starve yourself over the weekend and then have them on Tuesday again.”

So now that you understand the double-doughnut-day directive, we should say a word about the spelling and pronunciation of this deep-fried treat.

Paczek (POANCH-ek) is the word for a single doughnut. But, as Lorys said, “You never [just] eat one.” So the really important word to learn is the the plural paczki (POANCH--kee) -- as in, “I can’t believe I just ate 17 paczki.” 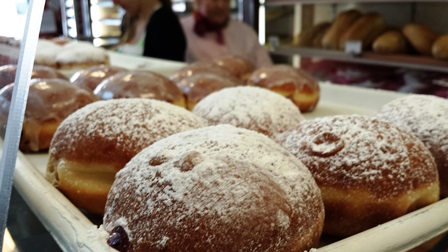 You may also be wondering if paczki are really that much different from other jelly doughnuts, Bismarcks, Berliners, bombolini, Boston cremes, or sufganiyot. From the looks of them you might think they’re all the same. But Dobra Bielinski of Delightful Pastries explains that they are a denser, eggier affair.

“People really eat jelly-filled doughnuts for the filling, not the doughnut itself,” the baker said. “And with a paczki, what happens is that people eat it for the dough and not the filling. Relatively, there is less filling and and more dough. Once this cools off, when you bite it, it springs back, it doesn’t collapse like pancake.”

On Wednesday morning, Bielinski presided over a bustling kitchen that would crank out more than 20,000 paczki over the next week, including 10,000 pre-ordered doughnuts and several thousand for the City of Chicago’s birthday celebration in Daley Plaza Tuesday.

“And those are just the orders we know about. We still have to make them for orders [by] people who are coming into the store,” Bielinski said.

Giant bowls of butter, flour, rum, eggs, yeast, and sugar were spinning under the mixer. Workers rolled finished mounds of dough into lime-sized balls for proofing. Once risen, whole trays of paczki buns would be gently lowered into vats of oil. Traditionally, that oil would have been lard, but today Bielinski uses a blend of canola and soy to reflect changing customer demands .

“Me too,” piped in Stasia Hawryszczuk, her mom, “because it tastes much better.”

“If you were living in a small town in Poland,” Bielinski said, “everyone would have their own pig in the backyard and the pig was fed scraps, and the lard was fairly healthy because they didn’t add anything to it. You would melt it down and you’d have all this fat to fry in. “

Midway through frying, the bobbing buns were expertly flipped using what look like two mahogany chopsticks.

And when the hot walnut-colored pastries emerged from the fryer, they bore nary a drop of grease -- thanks, Bielinski said, to the rum in the dough that prevents excessive absorption of oil.

Next up, is the sugar glaze, which was traditionally studded with candied orange peels, a delicacy in Poland during this time of year when fresh fruit was scarce.

When I was a young kid in Poland you would get oranges under the Christmas tree,” Bielinski said.  “There was a lot of rationing of food. So if you would spend your money on oranges, you would use up entire orange and you’d put the bits of candied orange peel on top of your pazckis and make a luxury item, so to speak.”

And lastly comes the injection of filling. Traditional fillings including prune and rose petal jam, but in recent years Bielinski has gotten more creative.

“We we do vanilla bean custard and vodka, Jameson’s whiskey and chocolate custard, and then we did moonshine with lemon curd,” she said. “So those were the adult ones.”

Bielinski is especially proud of the tart and tropical passion fruit, which she makes from real fruit puree.

If you ask a dozen paczki lovers about their favorite flavors, you could easily get a dozen different answers back.

But regardless of which flavor you choose,  we can all agree that these round poofs of sweetness can offer some much needed comfort during this long punishing winter.