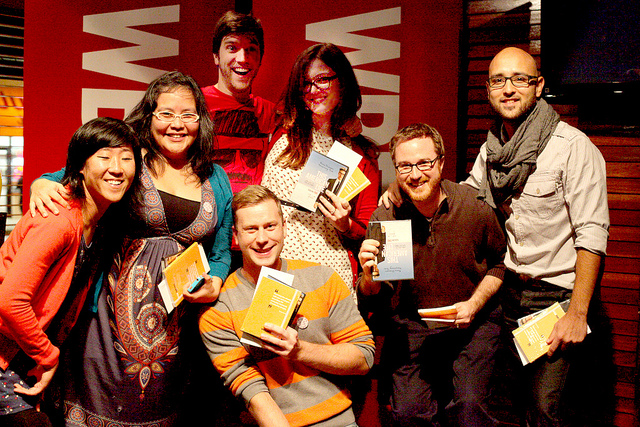 Pictured above is team “Suck it, Carl Kasell” and while we can’t condone the name (we adore the longtime NPR newscaster / loveable scorekeeper sidekick on Wait! Wait! Don’t Tell Me!), we do laud this group for their collective brain power and trash talking prowess. They are the first-ever winners of the first-ever Curious City Trivia Bowl and scored a (relatively) whopping 14 points out of 22.

If you didn't attend the trivia bowl on Tuesday, November 20, you're in luck: here are answers to three of the 10 questions we asked our live audience. The rest of our answers will be posted online soon on our microsite (a site where you can check out lots of other answered questions, vote on your favorites and ask your own).

Life on the median strips

Curious City: How much money is spent on ornamental plants and flowers, and what happens to it? from WBEZ on Vimeo.

You may have noticed the streets of downtown Chicago are getting more festive as the holiday lights and decorations go up. And along with those changes to the decor - perhaps you’ve also  noticed more festive winter plants and flowers? Well two curious citizens wondered about this.

How much does the city spend annually on the ornamental planting of flowers and plants, say, along Michigan Ave.? City-wide?

What happens to all the plants and flowers in the downtown planters when they are changed out for a new season?

We got our straightforward answers from spokesman Peter Scales who’s a director of public affairs with the city.

“The city of Chicago spends about $4.5 million dollars on ornamental flowers and plants in the medians in streets around the city. Changes are typically made at the end of each season - just did a switchover a few weeks ago. The old material is recycled into compost - the exception I guess is for flower bulbs - which are part of the citywide bulb giveaway every spring that we do with the Park District and Garfield Park Conservatory,” Scales said.

To be specific about the cost, Scales said about half a million dollars is spent on the medians downtown at these locations:

He said the remaining $4 million goes to flowers and plants across the city. When we asked him what happens to the compost, Scales wasn’t quite sure. He said “we contract that work out.”

The oldest sidewalk in Chicago

Curious City: The oldest sidewalk in Chicago from WBEZ on Vimeo.

How old is the oldest extant sidewalk in Chicago and where is it located?  I've always been intrigued by the number of different 'stamps' on sidewalks from contractors who installed the sidewalks.

This question came to Rosemary when she noticed that imprinted on some city sidewalks, are these little stamps or plaques in the concrete that mark the year the sidewalk was poured and the name of the contractor who poured it. So, at first we thought, OK, we’ll just find the stamp with the oldest year on it ... until we learned there are city sidewalks in existence from before concrete started being used to make sidewalks.

Turns out they’re made from stone and do not feature any kind of marking. So, the best approximation for date historians is when the area around the sidewalk was developed. To help us find some old stone sidewalks that haven’t been torn up yet, we asked Bob Remer of the Edgewater Historical Society for help.

Remer said, “This is a wonderful neighborhood to live in because of all the history. Talking about history - the sidewalk we’re standing on - which is a slate/limestone kind of sidewalk, was here when they developed this area in the late 1880s - about 1889. And so these sidewalks are probably the oldest, if not one of the oldest sidewalks in the city of Chicago.”

Curious City: Why ketchup is forbidden on Chicago-style hot dogs from WBEZ on Vimeo.

Kathy Herwig from Edgewater wondered something we’d just assumed was written in the old testament:

Why is Ketchup is strictly forbidden on Chicago hot dogs?

So our reporter Quinn Ford talked to the Vice President of Vienna Beef - Bob Schwartz - who also happened to pen a book called “Never Put Ketchup on a Hot Dog.” And oddly enough - Bob said nobody really knows for sure why Ketchup has become a forbidden condiment.

But Bob did say he’s heard one explanation from many of the folks he interviewed: that hot dog vendors from back in the Depression era agreed that Ketchup was too overpowering of a flavor for the dog (even though the hot dog features a variety of strong flavors in its mustard, onion, pickle, relish, tomatoes and sport peppered form).

Bob gave this analogy: “When you go to Gibson’s for a steak - you don’t put steak sauce on that - you want to taste that steak. And when you come to Herm’s, or Poochies or any of those other famous places and you want your hot dog - you want to be able to taste the hot dog and the bun together - that’s why they use a steamed bun - and Ketchup doesn’t cut it.”

Participants in our trivia bowl gave a variety of hilarious answers to this one, including “Ketchup is for jerks,” and conspiracy theories involving Heinz Ketchup and aliens.

If you happen to know a more compelling answer to this question or any other that we report on - let us know! You can comment below or email us: curiouscity@wbez.org