Oswaldo Alvarez sees the white signs, now yellowed by age, hanging from neighborhood bars as he drives through Chicago. These signs feature the red-white-and-blue Old Style beer logo on the top, with a lower partition that reads “Bottles and Cans,” “On Draft,” “Cold Beer,” “Cerveza Fria,” “Zimne Piwo,” or “Package Goods.”

Oswaldo lives in the Irving Park neighborhood, but grew up in Logan Square in the 90s. He says the signs remind him of the corner bar where his dad and other working-class men would drink. So he asked Curious City:

Why are there so many Old Style signs in the city of Chicago?

Just on our own we counted 69 bars with Old Style signs, and there are likely more. You don’t run into the same plethora of Old Style signs in New York, or Los Angeles, or — I don’t know — Omaha. “Well, it’s a local brand,” you might say. But so is Goose Island, and you can’t drive down Western Avenue and randomly spot a handful of Goose Island signs.

A lot of Chicagoans love these signs. There are photos of them all over Instagram and an entire blog devoted to tracking them.

Old Style is brewed in Wisconsin and sold only in the Midwest. The beer itself is a Chicago staple; I personally think it goes well with a celery-salted hot dog or shot of Malort. Some Chicagoans consider it a part of their identity, and associate it with a dad or grandpa or uncle who kept a fridge full of the stuff. Old Style returns the love, even branding itself as Chicago’s beer.

To get to the bottom of the Old Style signs mystery, I had to visit some of these neighborhood taverns, and drink a few beers in the process. When duty calls, one must answer.

I met up for a few drinks with Chicago beer historian Liz Garibay. She founded History on Tap and recently created an exhibit about beer at the Harold Washington Library. She’s the perfect person to answer Oswaldo’s question about why there are so many Old Style signs in Chicago.

We met at Frank & Mary’s, a classic “Old Style bar” in the Avondale neighborhood. Like many of the bars that have these signs, it’s a cozy neighborhood joint. Frank & Mary’s has been a bar since the 1920s, operating as a speakeasy during Prohibition. Sibling co-owners Frank and Mary Stark pour brews for a mix of longtime regulars and people who are new to the neighborhood.

You can take a tour of the bar of Frank & Mary’s in this 360 video we shot on a sleepy Tuesday afternoon, and get a feel for the type of bar where many of these signs hang.

(Click and drag your mouse to explore. If the 360 video viewer isn't functioning properly, you might need to update your browser. 360 VR production services by Scrappers Film Group.)

Garibay told me Old Style was first brewed in 1902 by the Wisconsin-based G. Heileman Brewing Company, and became available in Chicago by the 1930s. But the connection between the brand and Chicago wasn’t really sealed until 1950, when Old Style started sponsoring the Cubs.

Getting into Wrigley Field was big, she said.

“Here you are, sitting in this iconic place, in this iconic city, drinking this particular beer. People started to build a little more brand loyalty to it then.” 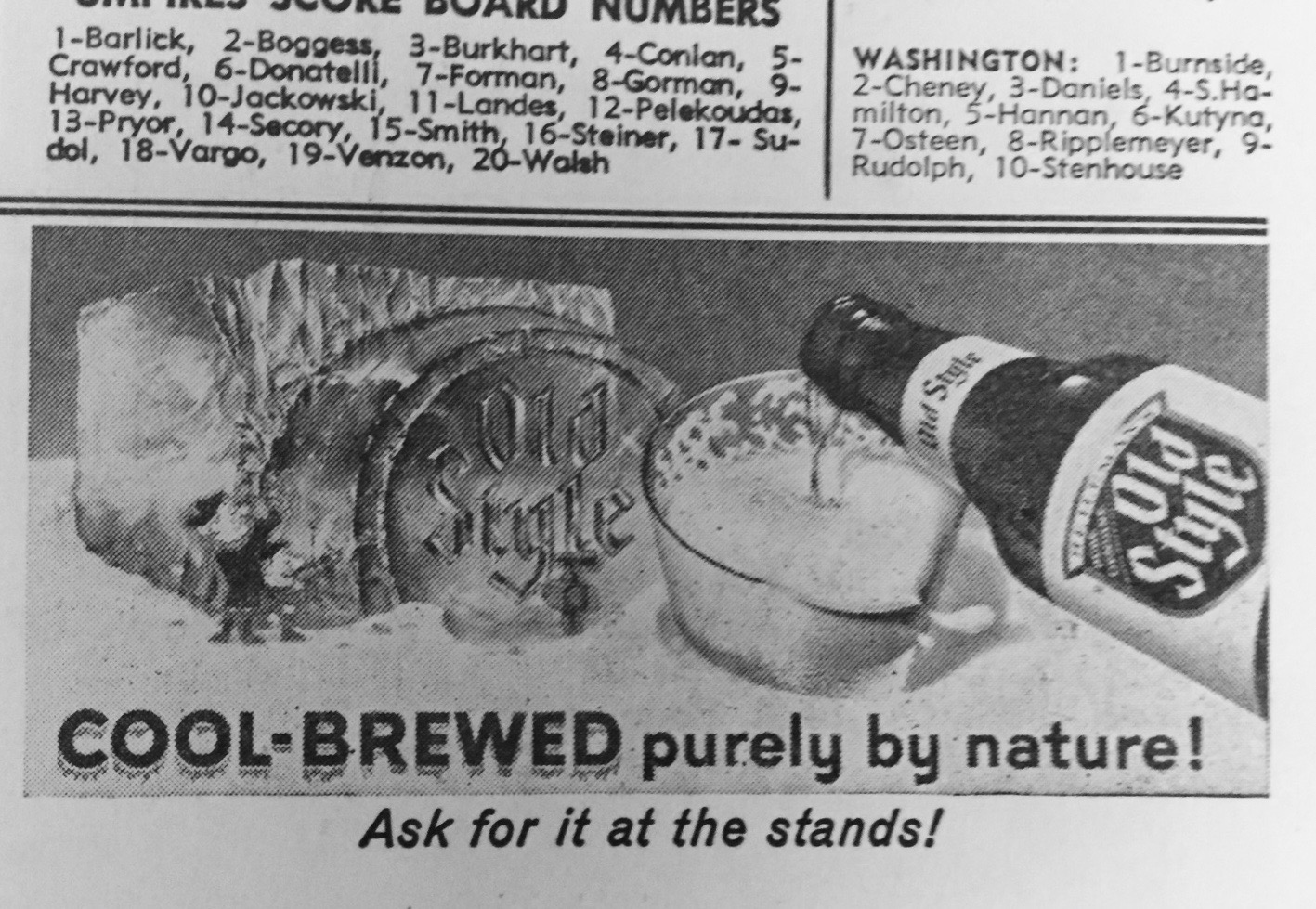 The signs came about in the 1970s. That’s when Old Style began giving them out for free to bars they’d done a lot of business with, even paying crews to install them. It was a win-win: Old Style got to assert its brand, while bar owners got a bright shiny light to lure in customers. Other brands also handed out signs, but not nearly as many as Old Style.

The brewery got an extra boost in 1976, when a nationwide strike by workers at Budweiser took its biggest competitor off the shelves.

“People would go into a bar, and go to grab their Budweiser, and there was none,” Garibay said. “So this was a great opportunity for a brand like Old Style to say, ‘Hey, what about us? We’re delicious!’”

During this period, Old Style's reputation as a working class, Chicago beer continued to rise. The company installed up to 2,000 signs in the Midwest, with Chicago as the glowing epicenter.

To Garibay, the Old Style signs are a relic of 1970s industry. They hearken back to a time when neighborhood bars like Frank & Mary’s opened at 7 a.m. to serve drinks to factory workers coming off overnight shifts.

Before we left Frank & Mary’s, Garibay pointed out a detail I hadn’t noticed: the counter behind the bar was lined with pro-union bumper stickers. There was one for the Local 13 Carpenters, the union of Operating Engineers.

“That gives you a window into who comes here,” she said. 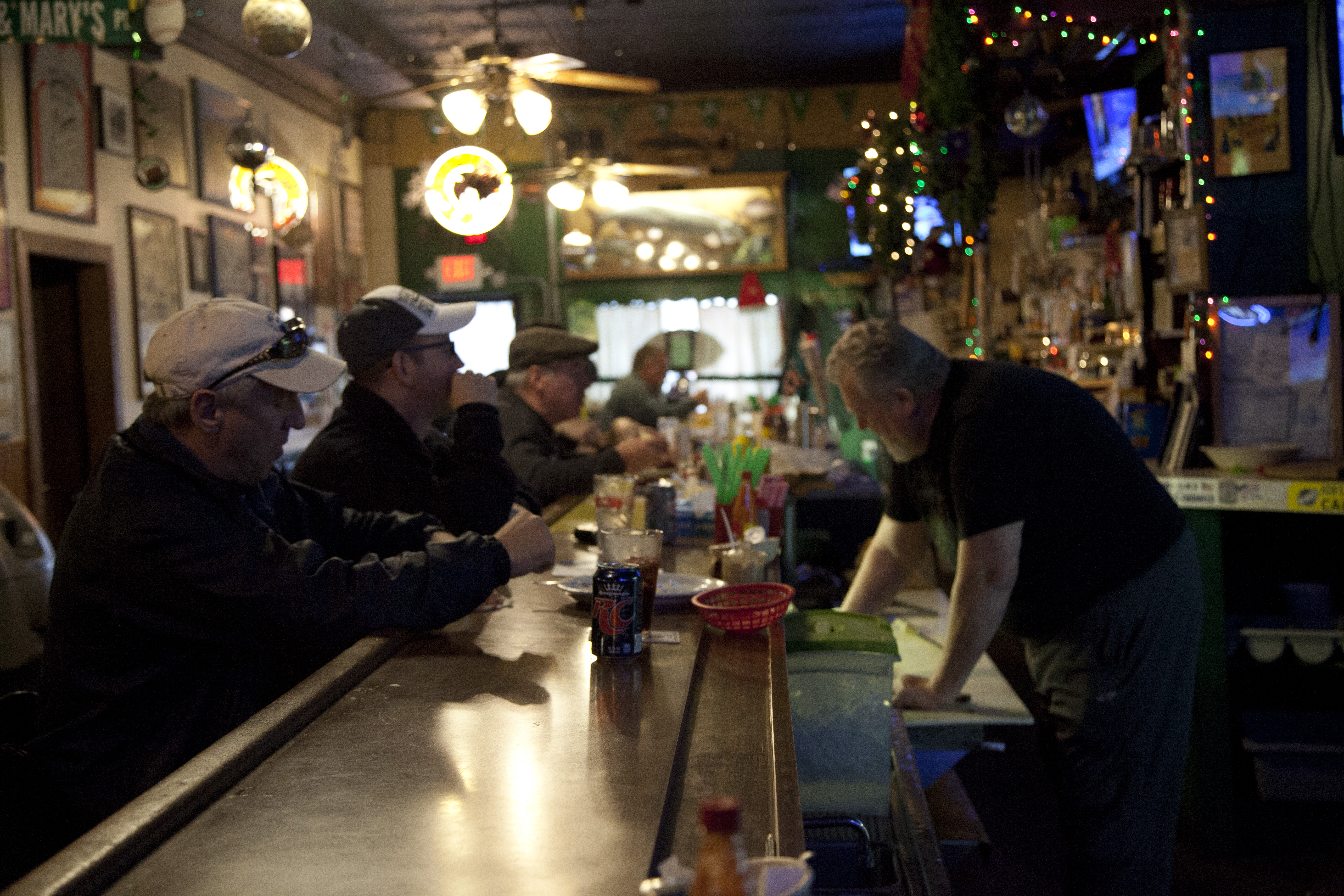 As the city evolves, will Old Style signs remain?

As our Curious Citizen, Oswaldo, makes clear, you can still see Old Style signs all over the city. But as the industrial world they've come to symbolize fades, will the signs start disappear, too?

Starting in the 1980s, Anheuser-Busch and MillerCoors grew into global corporate behemoths. This put a lot of pressure on mid-level breweries like Old Style. There were frequent swaps, mergers, and cutbacks. Old Style was eventually acquired by Pabst Brewing Company, and is featured as part of their “Local Legends” portfolio. Old Style lost its Cubs sponsorship to Anheuser-Busch in 2014, so when the Cubbies won the World Series in 2016, they celebrated by spraying each other with champagne and Budweiser.

As the brand declined, so did the signs. We can’t say the exact year, but Old Style stopped producing the signs in the `80s. This means that any Old Style signs you see hanging in Chicago today are likely to be at least 30 years old.

This also means a lot of the bars they’re connected to are old, and some of them haven’t survived the intervening years.

I talked to Adam and Aaron Keefner, two brothers who travel around to bars with Old Style signs and write reviews for their blog The Old Style Bar Project. They sent me a list with at least 12 Old Style bars they say have closed in the past five years.

He rattles off the names of a few that have shuttered recently: Marie’s, Carol’s, the Western Tap.

Certain owners of these bars have also chosen to take their Old Style signs down. The signs are old, and some of them are rickety and constitute a safety hazard. Owners might also want to avoid fees the city charges for signs that hang over the sidewalk.

The Keefner brothers say they’re not surprised when owners decide to scrap the signs.

“There are a lot of places that we walk into and say, How is this place still open?” Aaron Keefner said. “They are literally relying on this small group of regulars all the time.”

Owner Isaac Liberman, who bought the place from the old owners and reopened it in 2016, knew he had to have Old Style on tap.

“Old Style is such a Chicago beer. I’m not even from here, but I just moved here and I saw that,” he said. “I said, ‘We’ll have craft on the draft but Old Style is our cheap beer.’”

Liberman even dug out the Old Style sign, which the old owners had placed in storage. The light it cast wasn’t that perfect shade of faded Old Style sign yellow, so he coated the fluorescent bulbs in amber shellac to get the look just right. If you’re walking down Western Avenue, that warm glow might beckon you in, offering cheap beer, conversation, and a sense of connection to Chicago’s past. 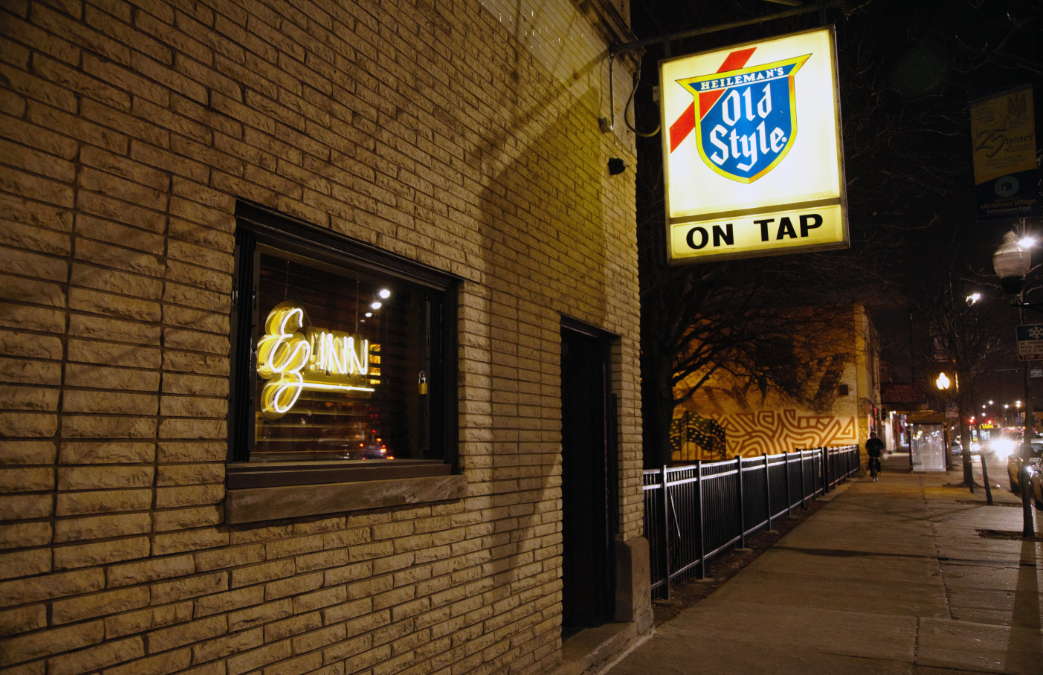 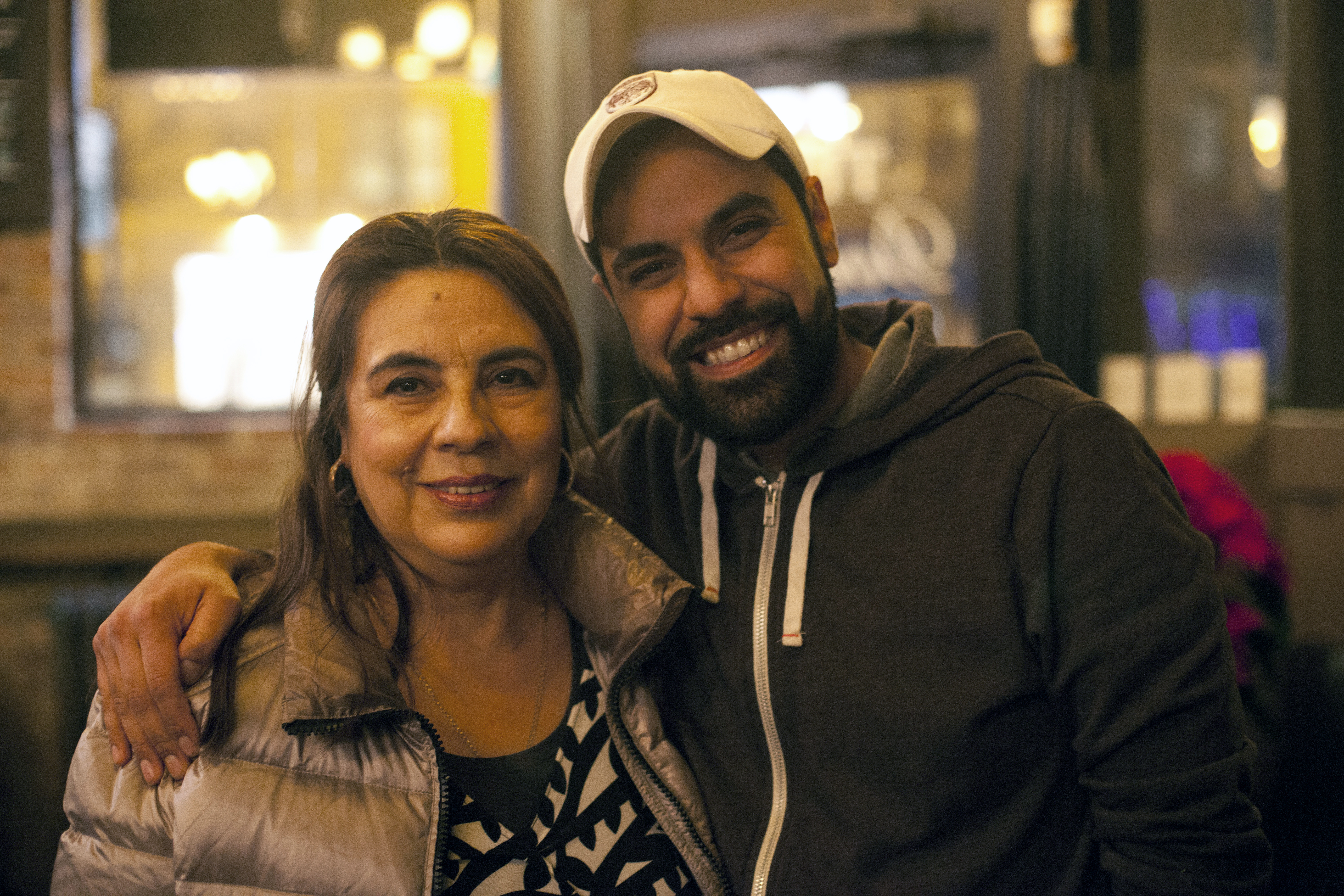 Oswaldo Alvarez grew up in the 90s in Logan Square, but now lives in Irving Park. He works for the Chicago Cook Workforce Partnership, which distributes grants from the Department of Labor throughout the city of Chicago.

Oswaldo’s connection to Old Style signs runs deep. They remind him of the bar that his dad Vincent, a machinist who worked for Cook County, would drink at every day. Vincent suffered from alcoholism, and died prematurely from a heart attack at age 46.

Every time Oswaldo sees an Old Style sign, he is reminded of his dad, and working on this story with me, he’s become even more aware of the connection. “Chicago was a big part of his identity, and there were so many things that were good, and there were also things that were not as good, right?” Oswaldo told me. “You know, in some way, I feel like I’ve reached a point where Old Style — I can even embrace that piece of my dad.”

John Fecile is a freelance reporter and filmmaker. Follow him @JohnFecile and see more of his work at johnfecile.com.

If you’re interested in Chicago bars with Old Style signs, our beer historian Liz Garibay is leading a tour of them on February 9th as part of History on Tap. More info here: https://goo.gl/gNDOrS

This story would not have been possible without the help of Chicago historian Bill Savage, whose latest book is an annotated edition of George Ade’s The Old-Time Saloon: Not Wet, Not Dry—Just History.