On the latest episode of Nerdette, a garden gnome-related dream interpretation, award-winning author Anna Quindlen on feminism, and a chat with Stephen King.

When Nerdette co-host Greta Johnsen found out that the King of Horror Stephen King was a fellow corgi lover, she knew she had to talk to him about his short-legged obsession.

(Note: This is a condensed and edited version of Greta’s Nerdette interview with Stephen King.)

Thank you for taking the time while you’re in Florida. I appreciate it.

Well, absolutely. If you want to talk about corgis, I’m your man.

People keep asking me, what do you want to talk to Stephen King about? And I say, “Corgis!” And they just give me this weird blank stare, like they don’t get it.

So tell me about your love of corgis. When did this begin?

Oh, let’s see. Probably around 1983 or 1984, when my kids were little, my wife’s brother came over with a huge corgi named Jeremy and I just fell in love with Jeremy right off the bat. And I said, “We’ve gotta have a corgi like that.”

We got a corgi whose name was Bill. He had epilepsy, but he was a terrific dog. He was terrific with the kids, and he lived for about three years. Ever since then, we’ve had corgis.

We’ve had probably five or six of them in all. We have two now. We have my wife’s corgi, whose name is Vixie. She’s a rescue dog, and she’s the “Thing of Good.” She went everywhere with [my wife] Tabitha. She wanted to sleep on the bed next to Tabitha, and she just would go crazy when Tabitha left, and I said finally, ‘I want a dog that likes me. I want my own corgi.’

My older son Joe also has a corgi, whose name is McMurtry (named after Larry McMurtry, the novelist), and he said. ‘Well, I got mine from this lady who raises corgis in New Hampshire. Why don’t you give her a call?’ So we did. And we got Molly, who is the “Thing of Evil.”

And now we have two corgis in the house, one is old and one is young. So we have a nice older lady and one who’s sort of a backup.

The Thing of Evil would be your corgi, wouldn’t it, Stephen?

Right. That’s Molly. Molly is the Thing of Evil.

So you talk about seeing your wife’s brother’s dog Jeremy for the first time and falling in love with him… what was it about Jeremy? 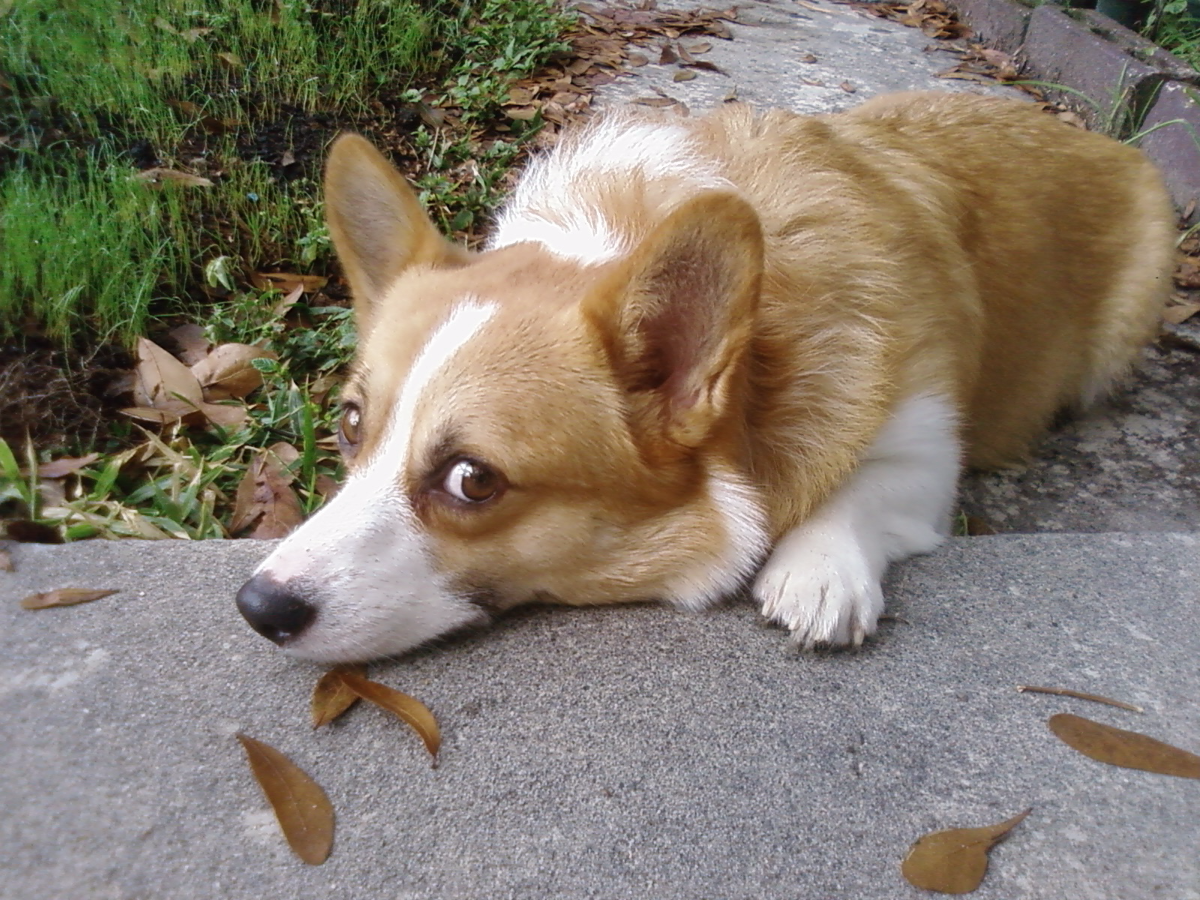 My favorite story-- we had a corgi named Frodo, who lived to be 13 or 14 years old. One day we had a wedding reception in our backyard, and we had a tent, and there were probably 40 or 50 people there. Everybody was walking around, and they were eating sandwiches. Frodo was out there, and he was watching everything that was going on.

One of the couples that was there had a little girl who was probably 3 years old, and she was wearing this, like, almost like a princess dress. It was very fluffy and it had a lot of petticoats and that sort of thing. And at some point, she wandered away from everybody and went out on the front lawn. And there’s a road out there. And the next thing I saw was Frodo had went to get her and was pulling her back by the hem of her dress. And she was giggling like crazy. But Frodo knew that she was supposed to be with the rest of the herd, so he pulled her back.

Yeah. And the thing about dogs is you can learn a lot about acceptance from a dog. You train them up and they accept that, and you give them love and they give it back. It’s great. It’s great to have a dog.

And I’ve posted a lot of pics of Molly on the internet. The Thing of Evil. It amuses me to think of a corgi as an arch super-villain that’s running the whole world. My imagination just runs that way, Greta.

So, I post the pics on the ‘net and everything, but the great secret is that Molly is really a Thing of Good. She’s busy. And … at the same time, well, I want to say she’s pretty well behaved, but if my wife were here right now she’d be laughing.

Do you have a corgi, by any chance?

I do have a corgi! Her name is Scout. And she is actually extremely anxious. So she… the smiling face that you described earlier? Scout kind of looks terrified all the time.

Dog beds are so much more terrifying than under the bed!

Well, Vixen is terrified a lot of the time. She came to us, and she trembled all over whenever anybody came near. Except Tabby. She bonded with Tabby immediately. Now she allows me to pet her and feed her, but nobody else. Nobody else can come near because she just sort of cringes.

Molly, on the other hand, is brave as the devil. As far as she’s concerned, she’s a big dog.

You know, there’s a great saying, I can’t remember who said it, but some people say corgis are big dogs in small dog bodies… but what they actually are is big dogs with no legs.

I remember taking Frodo on a walk one time, and this old fellow came along and looked at her and said, does that dog need to jump up to go to the bathroom?

And you said, no sir, she does just fine.

She does just fine. Is your dog named after Scout in To Kill A Mockingbird?

I assume so. She’s also a rescue, so I don’t really know, but I think that’s the deal. Because she is a lady named Scout, of which there aren’t many in the world.

Scooter, I like it. They’re fast. Molly is very fast.

Yeah, she’s got hustle. People at the dog park are always like, “Oh, that poor corgi’s not gonna be able to do anything with that tennis ball,” and I’m like, “Just you wait, man.”

Not only are they fast, but they can jump and they can do a lot of stuff.

This is a really weird question, but I think you’re gonna like it. What’s your favorite corgi body part?

Oh, favorite corgi body part. I think their little short legs because they move so fast. What you were saying before, about, “Oh, that little dog won’t be able to do anything” … They’ve never seen a corgi run. Their legs just blur in motion. And their bodies get low to the ground, and they just… they’re scooters! They scoot along. So I would say the little short legs are my favorite part.

So, it’s funny to hear that your son has a corgi. Because my parents have three corgis. That’s why I ended up with one, because I just fell in love with them too. What do you think it is about the generational thing with the corgis? Why? Are our brains just broken?

I don’t know what it is. I think it’s a form of love. You fix on one dog that you really love, and you see the beauty in that dog.

When I look at Molly, I see her broad chest and how muscular she is, and the brightness of her eyes, And as I say, whenever she looks up, there’s this sort of fiendish grin on her face.

Molly wears her November collar, which says, "Don't mistake me for a deer and shoot me; I'm really a Thing of Evil." pic.twitter.com/y38X22zsuV

There are those things, and of course, I love when you bend to stroke a corgi, they lay their ears back to improve the stroking surface as much as they can. And they don’t have tails so their whole rear end just wiggles with joy when you come in.

I think that I particularly care of Molly because I understand she’s probably my last dog. She’s a year and a half old. I’m 68, and If things work out the way I hope they do, We’ll play out at about the same time.

Stephen King, thank you so much for talking with me about corgis. This has been really fun.

It’s really fun for me too. Because nobody ever asks me about my dog, and that’s a really nice thing. So you take care of yours and I’ll take care of mine.