With those words, you enter the world of The Last Defender, an unconventional and completely immersive experience from Chicago’s House Theatre. The show casts its audience members as elite scientists working in a Cold War-era bunker to save the planet from the whims of a malfunctioning supercomputer.

The production, slated to close June 12, is housed in the basement of Wicker Park’s Chopin Theater. Audience members don orange jumpsuits, after being given code names like “Crank Case” and “Skidmark.” Everyone works together to solve a series of puzzles as varied as a interpreting hand positions on a series of clocks, using special goggles to decode messages, and playing a modified version of the board game Battleship.

It’s not a play. It’s not an escape room. The Last Defender is best described as an alternate reality game. “If you wanted to walk out of the room, you could,” says the show’s writer-director, Nathan Allen, “It’s the story that’s keeping you there.”

A video that looks like a low-budget PSA is shown at the beginning of the show and provides the setting: The year is 1983. A military supercomputer called MAYDAY has made an error, and will launch the US’s nuclear arsenal at Russia. The USSR, invoking the doctrine of “mutually assured destruction,” will retaliate, causing a nuclear holocaust, unless you and your teammates can crack the computer’s code in 60 minutes.

Why does cracking that code require doing things like sorting VHS tapes by gradient color?

“Puzzles are really hard to dramaturgically justify,” Allen admits, laughing. Nonetheless, a half hour in, everyone is completely consumed. Adults run around the room, shouting like kids at recess, asking each other for help. 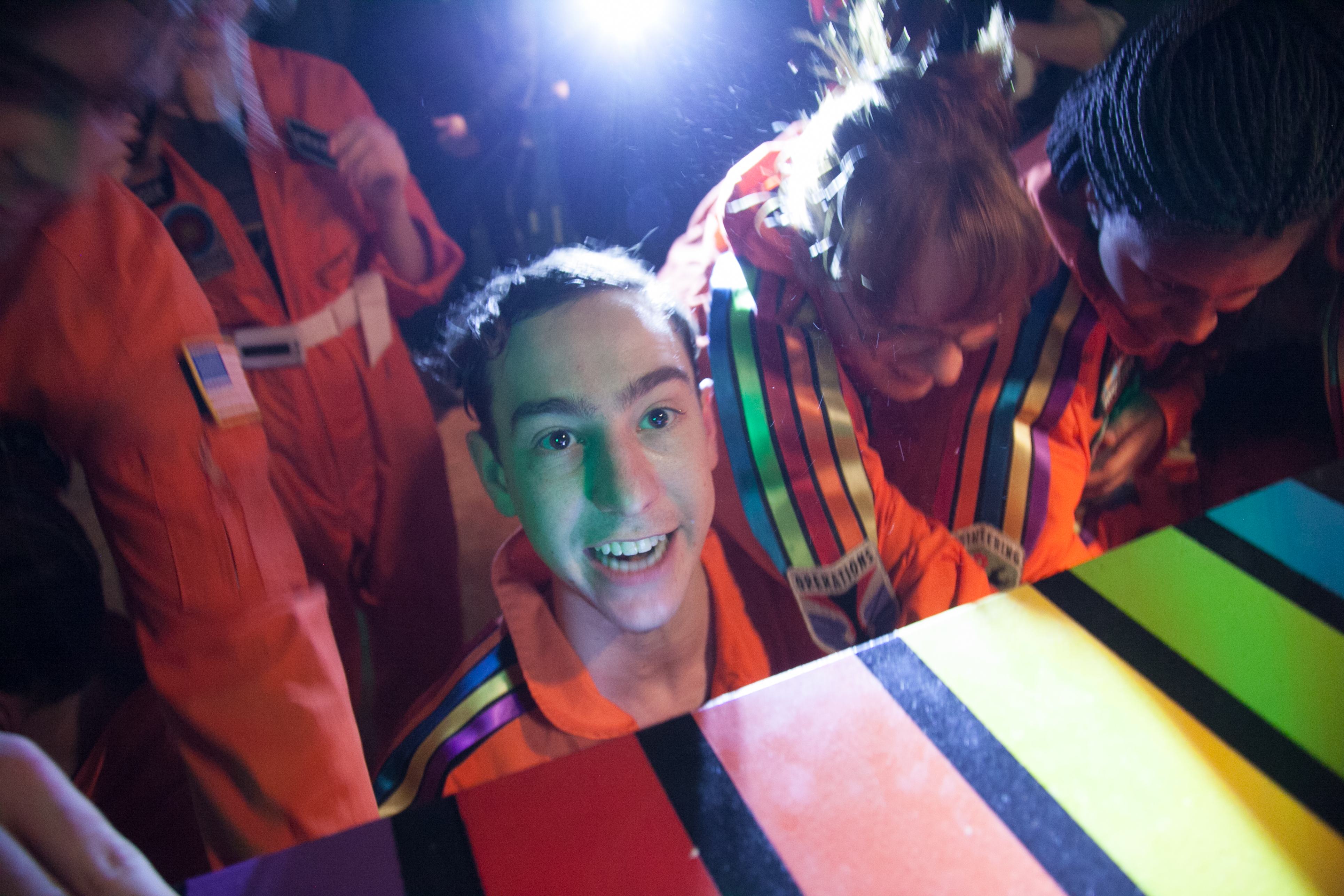 The game ends in one of three ways:

Of these three, the last outcome is the most common, while about one in every four teams achieves nuclear peace.

I asked Allen if he’d learned anything about human nature from this experience. “I think there’s this really beautiful thing that can happen when complete strangers come together and end up hugging and high-fiving at the end of the night,” he opines. “This game, or play, or any kind of story or piece of theater, that’s what it’s reaching for: The moment of people being able to see each other, and be in a social space.”

All that helps explain why The Last Defender is popular among companies, which will often buy out games for employees as team-building exercises. The show regularly sells out 10-12 shows per week, and if ticket sales stays strong, the House Theatre may try keep it running indefinitely. 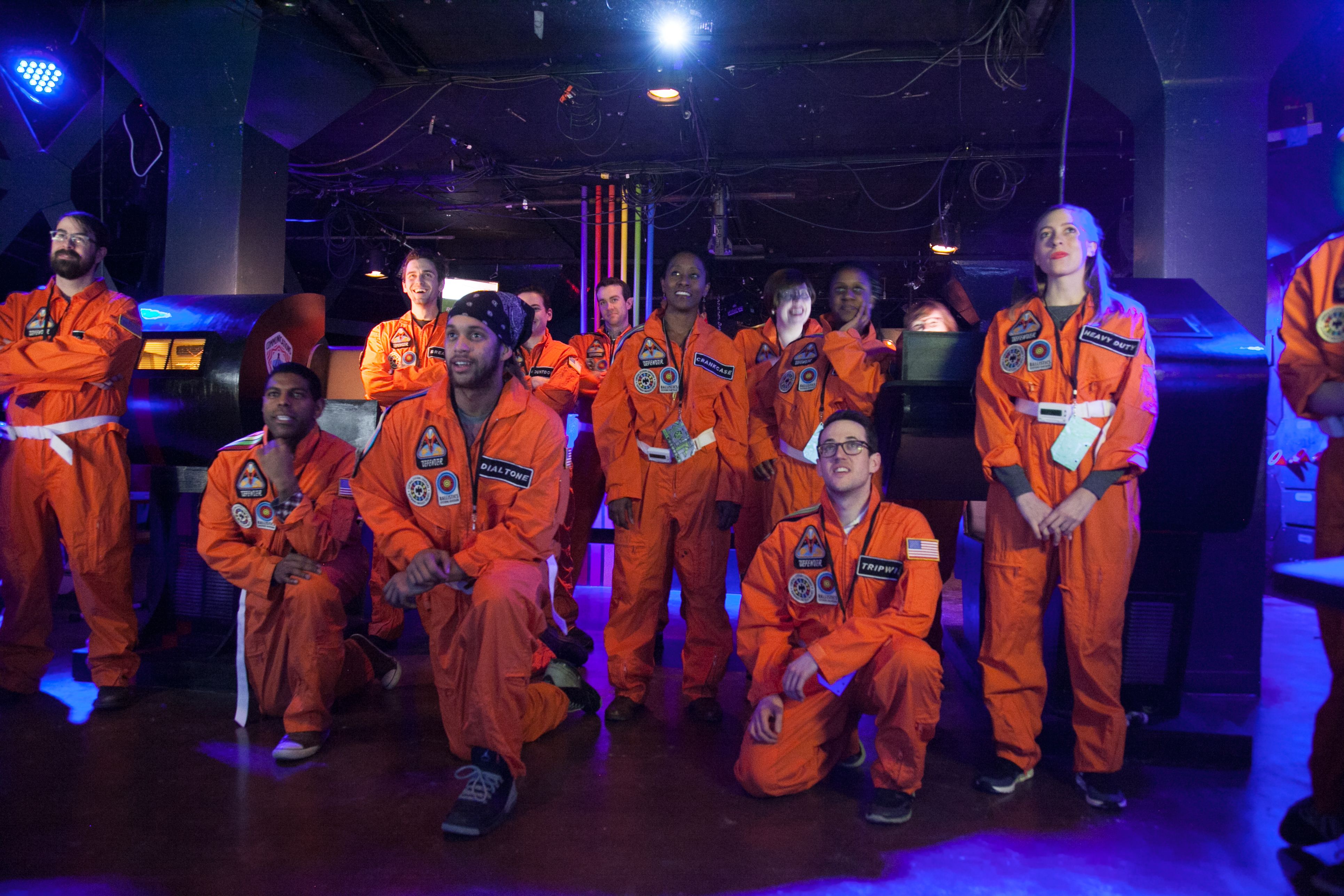 Nathan Allen is already forging ahead, developing a new game at the University of Chicago’s Performance Lab this summer. The project will reunite much of The Last Defender team, including Chicago Tonight puzzle master Sandor Weisz, software designer Ben Wilhelm, and the rest of the House’s production staff.

The working title for the new game is “Nova to Lodestar.” Allen hesitates to talk about the new game, but says that it's set either in submarines, or in outer-space. He’s not sure yet. Either way, the plot involves two ships, one trying to save the other.

Like any director, Allen approaches a new project with a theme in mind. The Last Defender grew out of an exploration of gun control. There are easy-to-miss references to the National Rifle Association – “mutually-assured destruction” is a favored principle of that organization, and the name of the supercomputer’s creator is Dr. Heston, after famed actor and gun advocate Charlton Heston.

As for the new game, “I think what's emerging might be something about class, and how we value human lives based on the class they belong to,” Allen says.

The new experience might feature an in-game economy, as in made-up currency like Monopoly Money, instead of a countdown clock. The game could also incorporate asymmetric co-op -- a game design element used in the Last Defender in which different teammates’ tasks interfere with each other. All of this will stretch the limits of player collaboration.

Allen is careful to stress that the project is in pre-development so this idea may be scrapped, or completely change. Developing The Last Defender took a year and a half, so don’t expect to see “Nova to Lodestar” on the House website soon. Still, for all you Last Defender fans, don’t worry: the next game is in the works.

The Last Defender is scheduled to close June 12. Tickets are available at thehousetheatre.com.

Note: The audio version of this story says the most common outcome of the game is that about one in every five teams achieves nuclear peace. This was correct when it was reported for the audio version, but the numbers changed to about one out of every four when the Web version was posted, so the most recent numbers we had at the time of publication are reflected in the Web version.

John Fecile is a journalist and filmmaker. Follow him @johnfecile.