Since before the presidential election, Donald Trump had an eye on Chicago: He frequently cited the city’s crime as example numero uno of the “American carnage” he wants to crack down on. Chicago is also one of the “sanctuary cities” that Trump promised to punish by withdrawing federal funds.

And Chicago — especially the Democratic Party, its constituents and allies — has focused on Trump. The Women’s March, staged the day after Trump’s inauguration, drew record crowds. And the state’s most-powerful Republican — Gov. Bruce Rauner — has continued to keep a careful distance from Trump and some of his policies.

A hundred days into the Trump administration, it’s worth separating the smoke from what fire there may be. Here’s a look at where things stand in five especially hot arenas.

Trump hasn’t made good on a tweet promising to send in the feds, but he has taken a concrete step towards pulling them back.

After the release of the Laquan McDonald video in 2015, the U.S. Justice Department started a yearlong civil rights investigation into the Chicago Police Department. During President Barack Obama’s administration, the department investigated more than 20 police departments.

Shortly before Trump’s inauguration, the Justice Department delivered a strongly-worded report on civil rights violations, widely seen as a prelude to negotiating a consent decree — a legal agreement between the feds and Chicago — to push reforms forward.

In March, when Chicago’s top federal prosecutor, Zachary Fardon, was suddenly fired — along with his counterparts around the country — he issued an emphatic public memo, with five pieces of urgent advice. 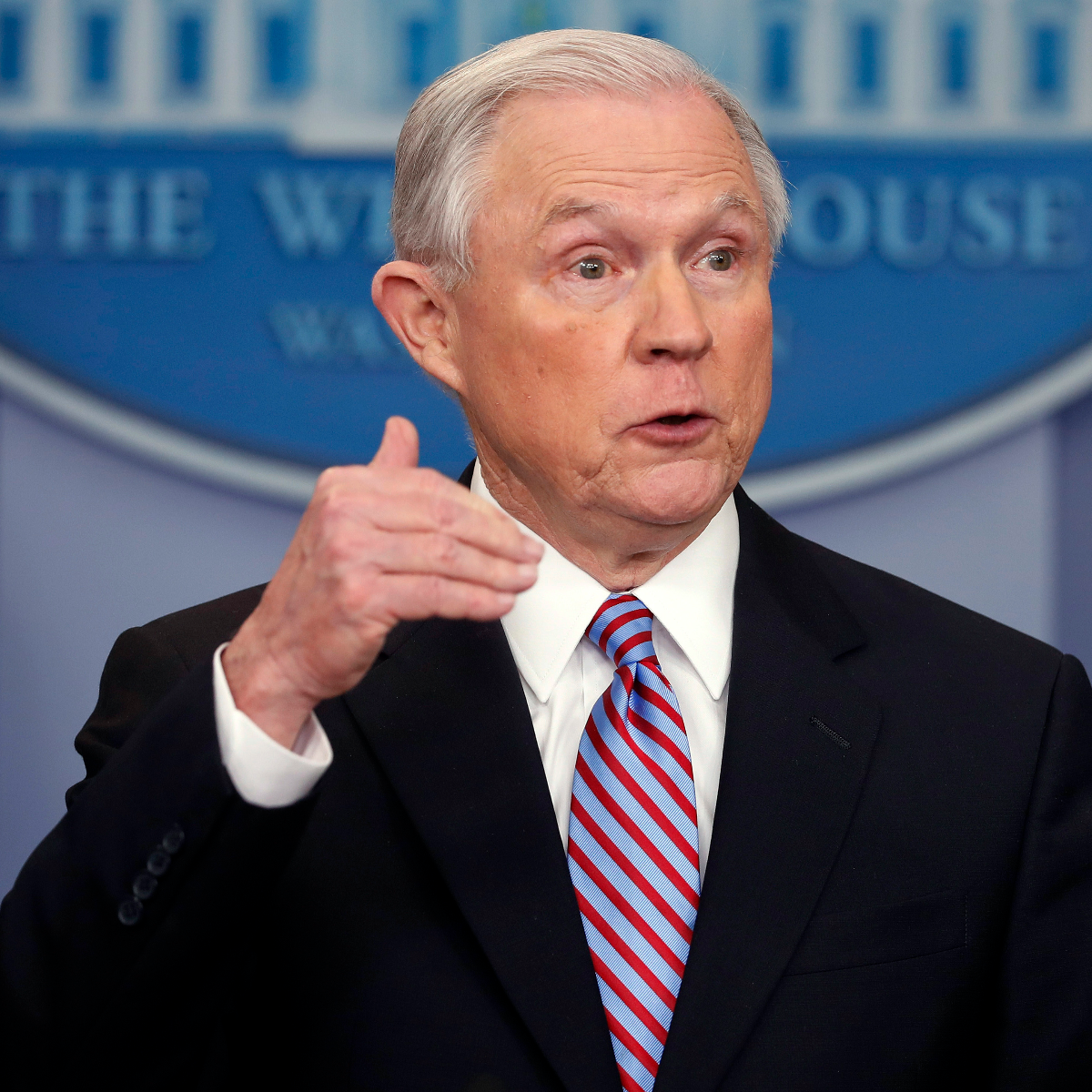 Mayor Rahm Emanuel and Chicago Police Superintendent Eddie Johnson declared they would push forward with changes on their own, but Fardon warned against relying on local officials.

“If you leave correcting those deficiencies to the vagaries of city politics, then you likely lose the long-term fight," Fardon wrote in his memo. "This city's history is replete with examples of saying the right thing, in some cases starting the right thing, but then losing focus."

2. Immigration: Chicagoans have been getting ready for a crackdown

Trump hasn’t yet unleashed the kind of crackdown on undocumented immigrants that his campaign promised — and federal courts have blocked his travel ban and a move to withhold federal funds from sanctuary cities — but those pledges have prompted action by immigrants and their allies.

Heading into Trump’s 100th day in office, House Republicans are shooting to pass an amended version of the proposed American Health Care Act — the bill that would repeal and replace Obamacare.

However, even if that bill passes the House by Saturday, it faces big obstacles in the Senate.

That still leaves major Trump-related uncertainty about what kind of individual insurance plans — if any — will be available for 2018.

Trump has predicted — just this week — that the state health insurance exchanges are in a death spiral. Some experts said he has the power to make sure that prophecy comes true.

In fact, they said he could make most individual insurance plans disappear altogether.

Here’s what that would mean in Illinois: The ACA has been relatively successful here, according to Cynthia Cox, who studies private health insurance for the Kaiser Family Foundation.

That means Illinois has more to lose.

“If the market collapses, there’s even more people who will lose out in Illinois than in other states,” Cox said.

More than 600,000 people in Illinois currently have individual health insurance coverage (as opposed to a plan through work, or Medicare or Medicaid), according to figures supplied by Cox. More than a quarter-million of those people are getting Obamacare subsidies — a total of  more than $738 million statewide. 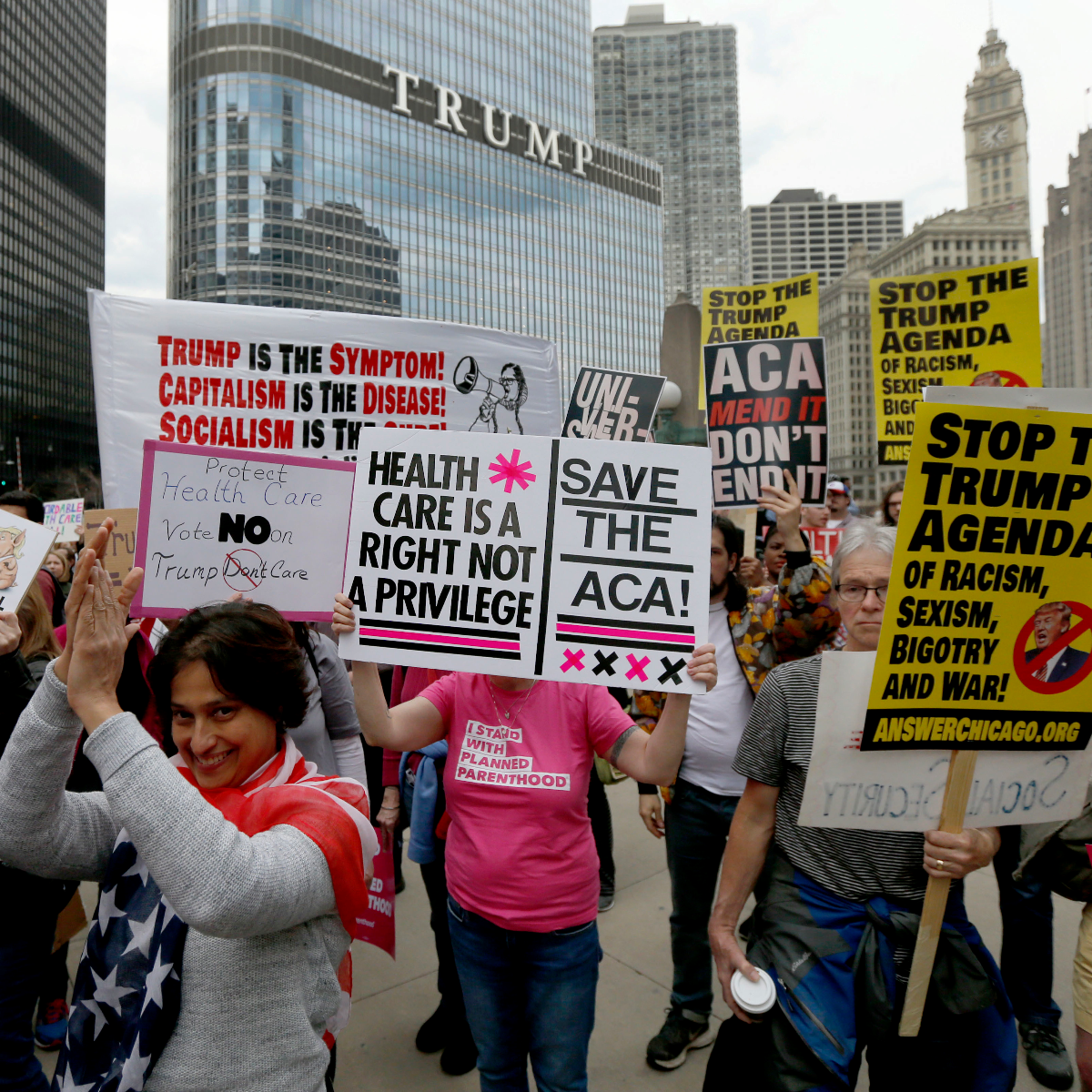 Geeky details (technical): The subsidy Trump controls is called “Cost-Sharing Reduction,” or CSR for short, and it helps low-income people on Obamacare pay their deductibles and co-pays. Some insurance companies have already said they’ll pull out of the exchanges if the subsidy goes away, and Cox said others would do the same — which would be the Obamacare death spiral. Cox said they would also likely leave the individual health-insurance market altogether.

Geeky details (political): Just this week, Trump threatened to pull the CSR subsidy as a bargaining chip in negotiations to avoid a government shutdown. He changed his position on Wednesday but didn’t commit to funding the subsidy in the long term.

In May, insurers are supposed to submit plans to the Illinois Department of Insurance on what they’ll offer on the 2018 exchange.

4. Budget cuts: At Day 100, Trump’s proposals are a long way from becoming reality

In March, the Trump administration released a budget proposal that included the elimination of programs that fund homeless services and after-school programs, among others.

Those proposals have reportedly alarmed mayors nationwide, and one expert told WBEZ that Illinois would be especially hard-hit because the state’s financial weakness means it can’t fill in the gaps.

However, that budget is probably not going to get enacted any time soon.

For one thing, the congressional budget process moves slowly. How slowly? The federal government is more than halfway through its fiscal year for 2017, and there is no prospect of negotiating or passing a budget.

For another, whenever Congress does get around to an actual discussion of Trump’s priorities, many of them will be unpopular ... with Republicans. A Republican congressman from Kentucky called them “draconian, careless and counterproductive” in the Washington Post.

Another GOP House member, Steve Stivers of Ohio, told Politico, “I think some of the cuts are a little drastic in certain places." Stivers is the chair of the National Republican Congressional Committee, which coordinates and funds congressional campaigns nationwide. So, an important voice in the party.

5. Activism and Politics: Everyone’s trying to figure it out

The day after Trump’s inauguration, the Women’s March in Chicago drew a reported 250,000 people — more than double what organizers said they expected, and enough that the march itself had to be cancelled. Some political observers asked how much of that energy would be sustained and where it might lead.

Absent an election, it’s hard to say for sure. In Crain’s Chicago Business this week, columnist Greg Hinz points out that Trump has local politicians of both parties off balance.

However, at least one local pro-Trump activist says he has seen a significant decline in energy. Mike Irving runs the DuPage Deplorables group on Facebook. He said in the last 100 days, that group has seen less traffic and fewer comments.

“I’ve tried to contact some of these people one-on-one, and everybody’s stepping back,” he said. “Nobody is expressing regrets about voting for Trump, but it concerns me that the activism, or the willingness to do anything, has kind of dropped off.”

Meanwhile, Trump continues to keep more traditional Republicans scrambling. Dan Cronin chairs the DuPage County Board and used to run the DuPage GOP, an important base for the state party. He said DuPage went 65 percent for Hillary Clinton last November and thinks voters there will reward politicians who can show that they “are different from Donald Trump.”

“If I could start a party-- take the Republican Party in DuPage and rebrand it,” he said, “let’s call us the Reasonable Party.”

The party’s most-powerful local figure, Rauner, has kept a cautious distance from the president. Rauner expressed concerns over Trump’s travel ban, but he didn’t take a stand against it. When it came to Trump’s tweets on Chicago’s shootings, Rauner said sending the National Guard to Chicago would be a mistake. But Rauner supported Trump’s controversial pick for education secretary, Betsy DeVos. And he expressed concerns about Trump’s plan to replace Obamacare, while also criticizing Obamacare.

Dan Weissmann is a reporter for WBEZ. You can follow him at @danweissmann.