What’s That Building? One Chicago Building, More Than 100 Years Of Auto History

The charming terra cotta details on the building at the corner of Broadway and Hollywood Avenue in the Edgewater neighborhood have always caught the eye of Chicago-native Karen Furnweger.

The vintage look got her wondering about the building’s history, so she asked “What’s That Building?”.

She knew it was home to Chicago Northside Toyota until recently, but wanted to know: “What was it originally?”

As it turns out, the building at 5656 N. Broadway has been in the car business since it opened in the early 1900s. We visited the building with Furnweger to see what other details we could dig up — including its role as an early electric car charging station.

Part of a ‘Motor Row’ on the Far North Side

The building opened as the Hollywood Garage in the early 1900s. At the time, that stretch of Broadway was developing into one of Chicago’s “Motor Rows,” areas where auto-related businesses, such as car dealers, body shops, battery makers and tire shops clustered. The most prominent “Motor Row” at the time was on the Near South Side, but the one on Broadway would become one of a few others sprinkled throughout the city.

This particular Motor Row trailed along Broadway from Lawrence to Devon avenues. It included simple maintenance shops like the Hollywood Garage, as well as showrooms like the Riviera Motor Sales building, which is now a city landmark.

The Hollywood Garage building isn’t as flashy as the Riviera showroom, but it didn’t have to be. It wasn’t built for selling cars, just maintaining them. Nevertheless, the architect of the garage designed more than just a workshop when they added that handsome second floor. Today the second floor is an apartment, so it may have served a similar function in the 1900s.

In 1916, you could charge your electric car at the Hollywood Garage

According to ads from the time, the Hollywood Garage catered to wealthy car owners. The ads boasted it was a place where only trained mechanics worked on your car — “no assistants” — and encouraged customers to buy high-end brass cranks and Standard Oil’s Red Crown gasoline.

Here’s something else customers could do at the Hollywood Garage: charge their electric cars. 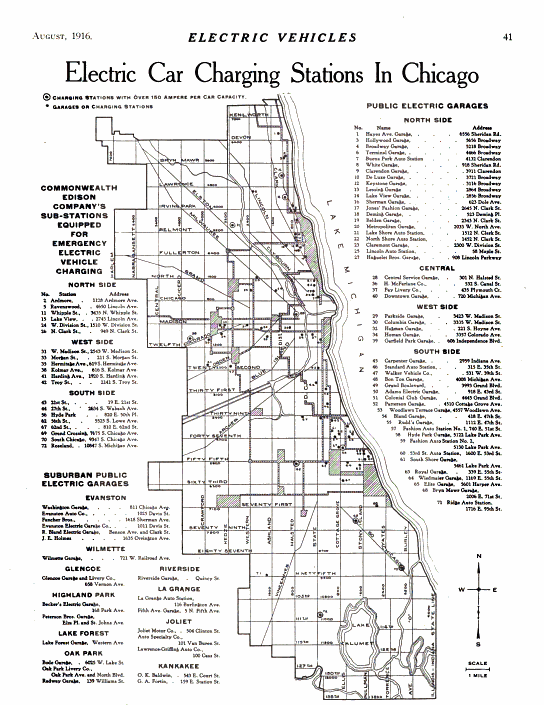 In the early 1900s, when gasoline-powered cars weren’t yet dominant, there were three primary types of cars being made: electric, steam and gas. Electric worked well for city drivers because they were quieter and didn’t add to the smoke that was starting to choke industrial cities like Chicago. Plus, the limited driving range wasn’t a problem if you were just driving around the city.

The building’s days are likely numbered

Over the years, the Hollywood Garage building has been home to a car polishing company, car dealerships and an auto body shop where Chicago Bulls player Horace Grant once got his Mercedes painted, according to the Chicago Tribune.

Furnweger, who said she walks by the building at least once a week, was disappointed when she heard of those plans.

“It’s a shame that it seems destined for demolition,” she wrote in an email. “It’s an interesting-looking building with a surprise neighborhood history in a growing sea of nondescript cinder-block monoliths.”