They attended the University of Chicago a few years apart and, until recently, didn’t know the other existed.

But their experiences with sexual harassment and gender discrimination derailing their studies at the University of Chicago five decades ago brought Cheryl Sundari Dembe and Marilyn Webb together. This past Saturday, they both finally received Ph.D.s from the prestigious university in Hyde Park.

Both women, inspired by the #MeToo movement, had individually reached out to the university to finish what they started as students in the 1960s.

The university said it wanted to right a wrong that was allowed to persist for so many years. It’s believed to be the first university in the country to take this step for former students.

“This is such a frosting on the cake of life,” Dembe said the day before commencement. “This has really allowed me to see in greater depth who I really am and dare to shine.”

When Webb entered UChicago in the fall of 1964, it was a turbulent time in America and on campus.

The anti-Vietnam War and civil rights movements were starting. She got into community organizing and received a $10,000 grant to open a preschool in the Woodlawn area with a group of local mothers. She planned to study the school for her dissertation in educational psychology.

But when she asked a professor and mentor to serve on her committee, she was taken aback by his response.

“He said he wanted to come over to my apartment and give me baths, and it was pretty clear that was the exchange,” Webb said. “I said, ‘I’d prefer not,’ and he said he’d ‘prefer not.’”

Next, she went to another professor.

“And he raced around the desk, unloosened his tie as he was racing, and then I jumped up and all my papers fell on the floor,” Webb said. “And he pinned me against the wall and started slobbering all over my face. He said it was quid pro quo.”

Webb felt out of options. She said at that time there was no way of reporting these incidents, and she didn’t think she’d be believed anyway.

“When you realize as a girl how your body matters more than your brain, it really shocks you,” she said.

Webb felt she didn’t belong at the university and left.

She moved to Washington, D.C. where she became involved in the women’s rights movement. She later reached out to the university in the 1970s to finish her degree, but was told it couldn’t happen.

She eventually got her master’s degree in journalism at Columbia University and started teaching there. She became a journalist and founded a journalism program at Knox College and a women's studies program at Goddard College. She wrote a book, The Good Death: The New American Search to Reshape the End of Life.

When the #MeToo movement took off recently, Webb was reminded of her experiences decades ago in Chicago. It inspired her to write the university president about her situation. She told him she wanted to get her degree.

This time, the university listened. With the help of the dean of social sciences and a group of professors who served on Webb’s research committee, she was able to travel to the university from her home in New York to finish and defend her dissertation. It was based on the research and ideas in her book.

After it was all done, she said, “I sat in the quadrangle and the bells were playing and the ivy was on the wall, and I just cried. They’re wanting to make things right.”

When Webb and her family arrived at the university on Saturday morning, the campus was buzzing with family and friends who had shown up to see their loved ones graduate. As they entered, Webb ran into someone she’d heard a lot about for the past few months: Cheryl Dembe.

Dembe came to the University of Chicago a few years after Webb had left, just after the summer of 1968. She was one of seven women in the chemistry doctoral program. Over the next few years, Dembe worked on her dissertation with a chemistry professor.

One day in the winter of 1971, she remembered he looked over her progress and said, “You’re done. You can start writing up your work.”

Dembe was elated, but her excitement was short lived. Just ten days later, her adviser unexpectedly died. Dembe had lost a mentor and person key to her success at the university.

She quickly identified another professor with a similar research background who might be able to help her continue her research. But three days after her mentor’s death, she was told the professor wouldn’t take her on. He didn’t want a woman on his research committee.

“I was given one option, and I was just told simply that I had to start my research from scratch again on a new project with a new adviser,” Dembe remembered.

It would be another eight months before Title IX legislation was passed, prohibiting discrimination on the basis of gender.

As Dembe took in that news, something else happened that would shake her to her core. A week after her mentor died, a man broke into her apartment and sexually assaulted her at knifepoint.

“After being assaulted, the department sent me flowers but no counseling or guidance or instruction from that point on,” she said. “I think people were terrified to interact with me, and I couldn't find my way through that process.”

Not only did she feel uncomfortable talking about her assault, but she couldn’t share why her research couldn’t continue.

“That I couldn't finish the degree because I was a woman, it was very embarrassing,” she said. “It’s funny emotions thinking of it now, but I think I felt embarrassed and ashamed because there was this thing I couldn’t correct.”

Dembe took a trip to California where she stumbled upon a teaching opportunity. She left the university and has lived in the Bay Area ever since. Dembe has had a long career teaching chemistry at multiple community colleges, including Diablo Valley College, where she was head of the chemistry department. She also wrote a book, The Choice of Happiness: Glimpses from an Extraordinary Ordinary Scientific Mystery.

About 20 years ago, she discovered the work of a chemist named Douglas Osheroff. While reading his research, she realized it was extremely close to the work she had been doing at the University of Chicago before it was derailed. He had eventually won the Nobel Prize for that work, causing her to wonder what might have been.

“I thought, ‘What could be something positive that could happen from this?’” Dembe said. Then, she thought, “I want my degree!” 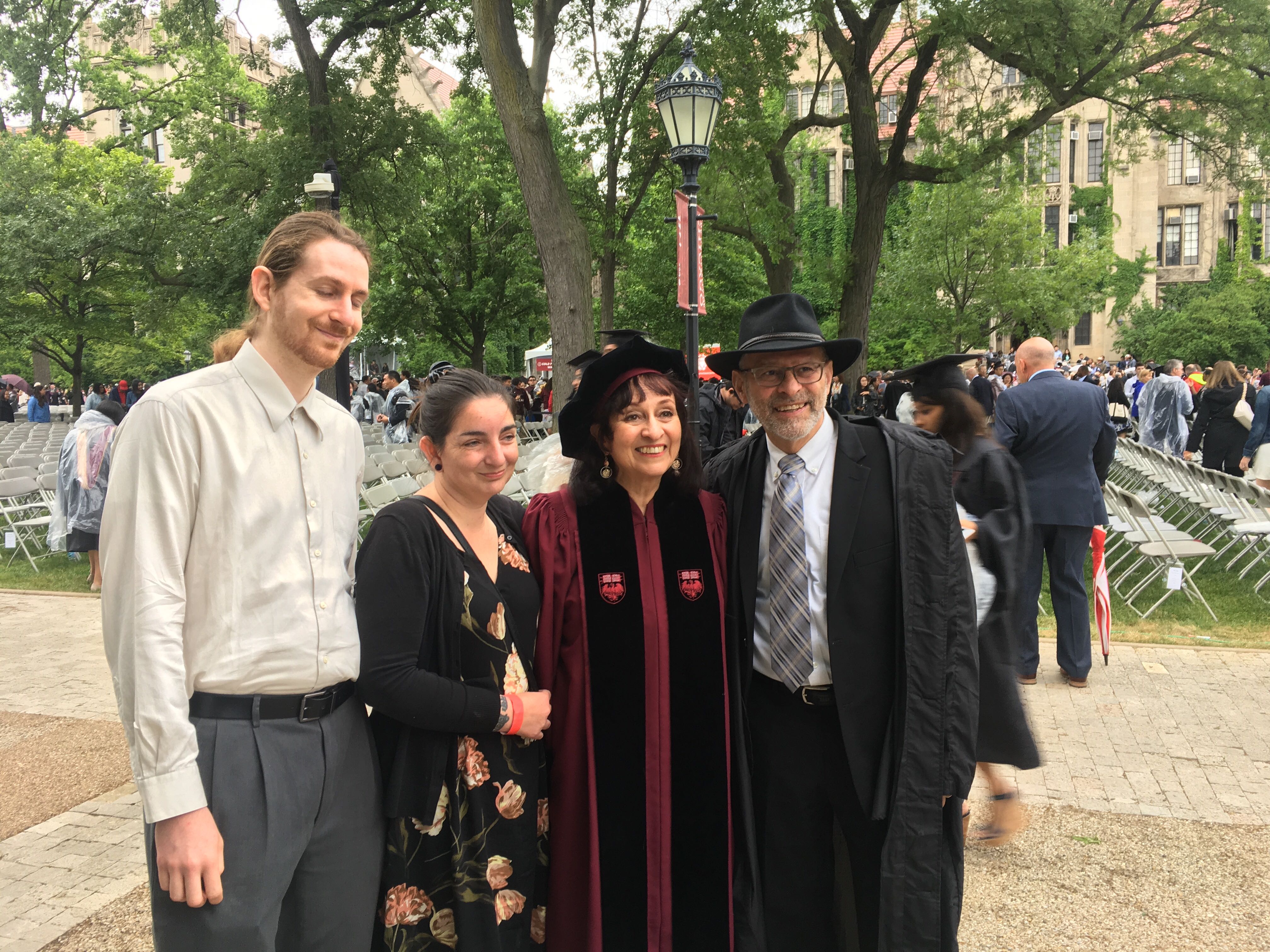 The #MeToo movement also inspired her to reach out to UChicago President Robert Zimmer. She was connected with a professor to help her finish her dissertation. Since Dembe had kept all of her research — she couldn’t bear to throw it away after all those years — she was able to use it to complete her requirements for graduation.

“It felt infinitely satisfying to have my existence acknowledged,” Dembe said.

When the university conferred degrees on the physical sciences division Saturday morning, Dembe stood up with the rest of the students, her arms in the air, her head raised to the sky.

“That’s when I entered into tears,” Dembe said after the ceremony. “It’s been such a long journey and to realize that it actually happened is unbelievable.”

After the morning convocation ended, Dembe was soon surrounded by friends and family who had also traveled to see her receive her degree. They accompanied her to the physical sciences division’s degree ceremony.

Meanwhile, Maryiln Webb joined the other students in the social sciences division at Rockefeller Chapel for her degree ceremony. 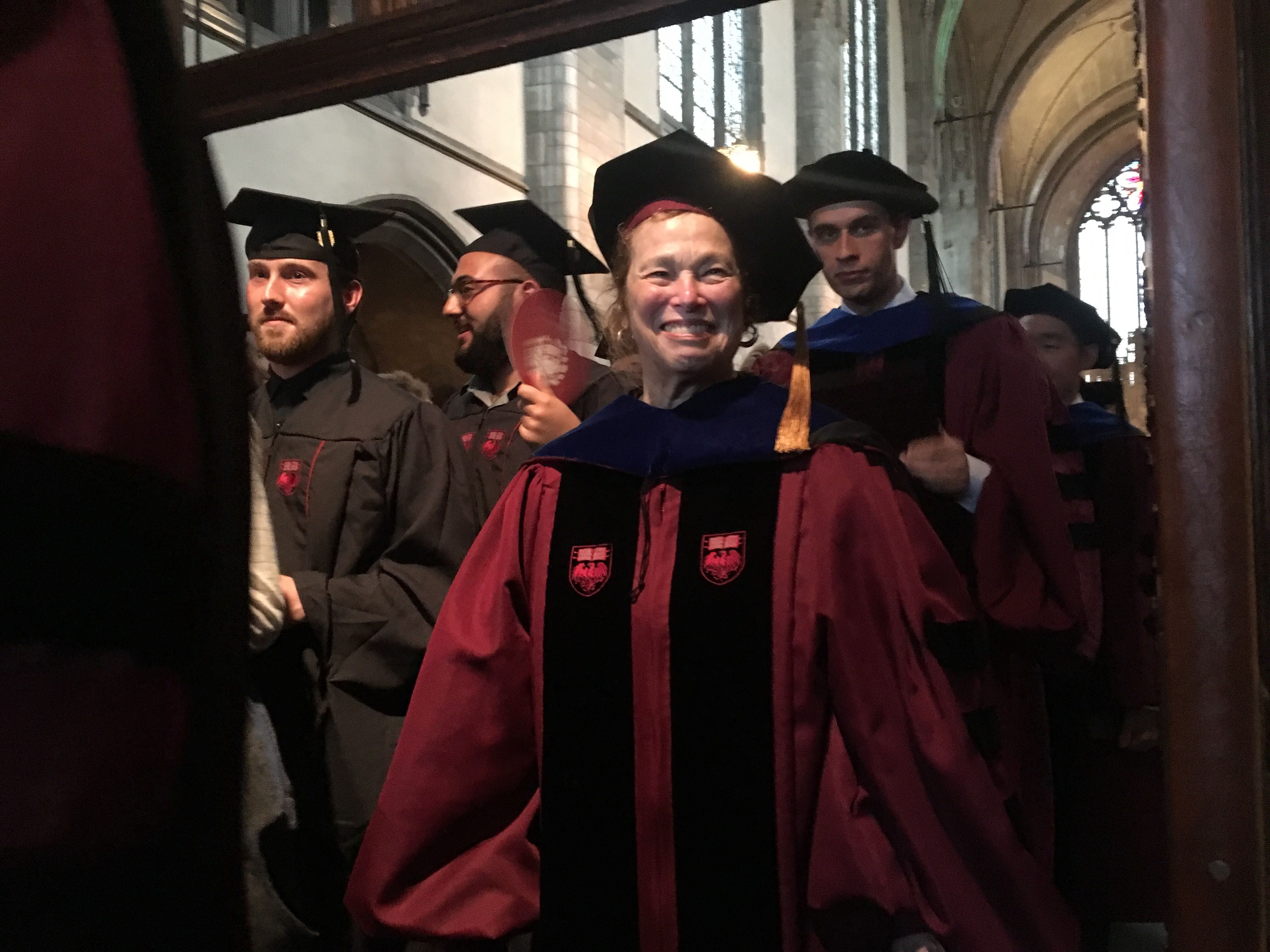 As Webb processed out of the chapel, a smile a mile wide was plastered on her face.

“This was so beautiful, so inspiring,” she said. “It’s an old, old tradition … and I’m so happy it happened for me.”