This summer, the shamrocks came off the walls at 8404 S. Kedzie Ave., a building with firehouse-red doors in Chicago’s Ashburn neighborhood. For decades, the building was the headquarters of the Gaelic Fire Brigade, a group of pro-union firefighters with a strong Irish influence and — as with the department in general — largely white. When the Gaelic Fire Brigade moved to a new location, the clubhouse was bought by the Black Fire Brigade, a social club working to overturn decades of systemic racism within the Chicago Fire Department. 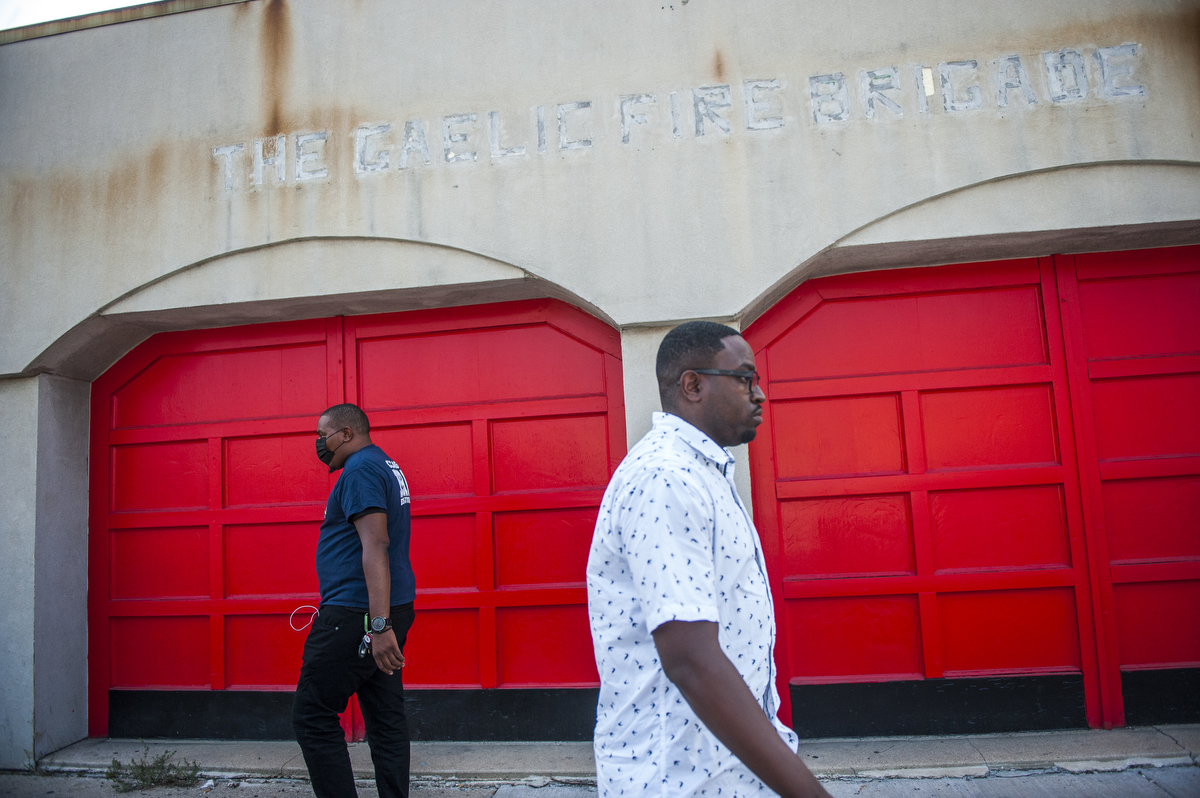 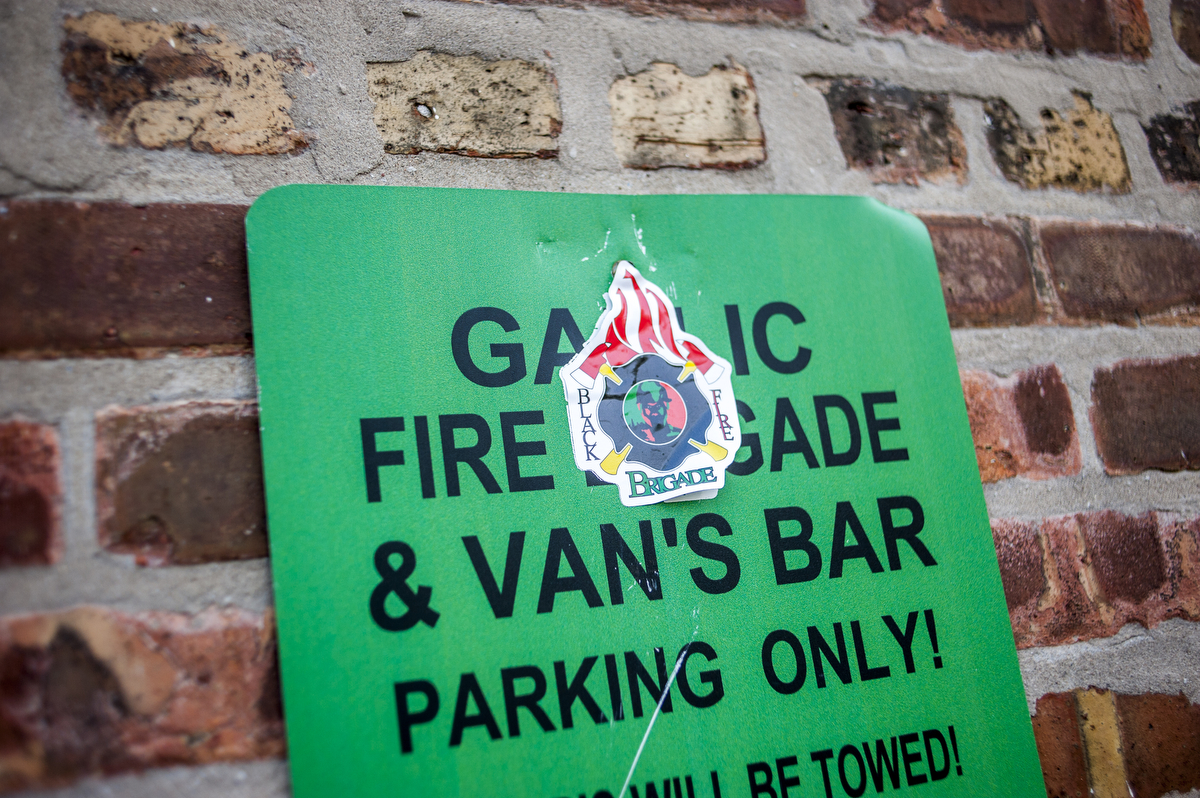 The Black Fire Brigade considers the transformation of the clubhouse a potent symbol of change. African-Americans make up a third of Chicago’s population, but their numbers within the fire department hover close to 17 percent.

Increases have been been stubbornly slow, despite several lawsuits that have forced the CFD to hire more black firefighters.

Through regular fundraisers and professional training classes, members of the Black Fire Brigade and their allies are remaking the clubhouse and — they hope — the fire department. 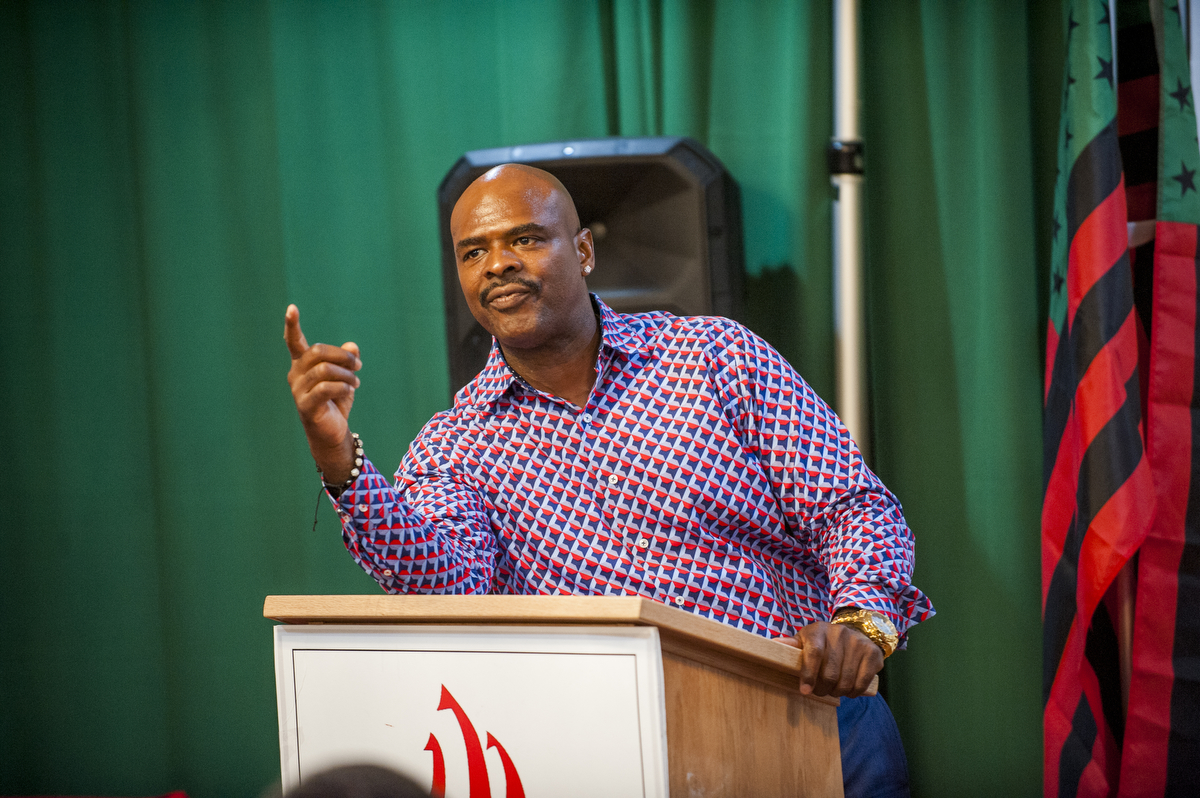 Lt. Quention Curtis is the founder and president of the Black Fire Brigade. He bought the clubhouse, hoping to mentor young people there.

“All these Irish brigades have always prepared and trained their children to be police and firefighters,” he said. “That’s why you see second-, third-, and fourth-generation Irish firefighters. When you look at the African-American community, we don’t have that kind of generational service. We’re playing catch up.”

He added: “Everything African-Americans have ever got through the fire department has always been through a lawsuit. That’s just the fact of it. We’re trying to change the narrative.” 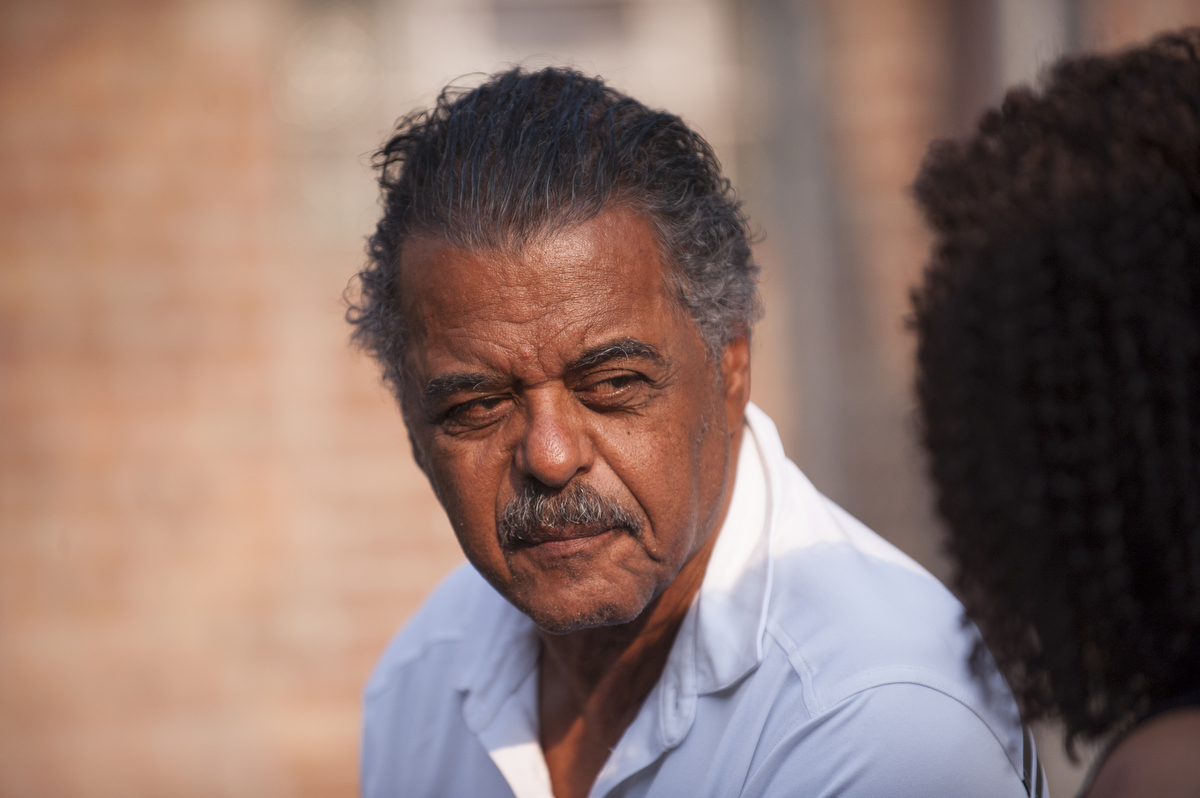 When Jim Winbush entered the Chicago Fire Department in 1965, the department was just beginning to integrate. He helped found the African-American Firefighters & Paramedics League of Chicago, which was involved in numerous lawsuits fighting racist hiring practices. Retired since 1996, Winbush attends clubhouse parties. 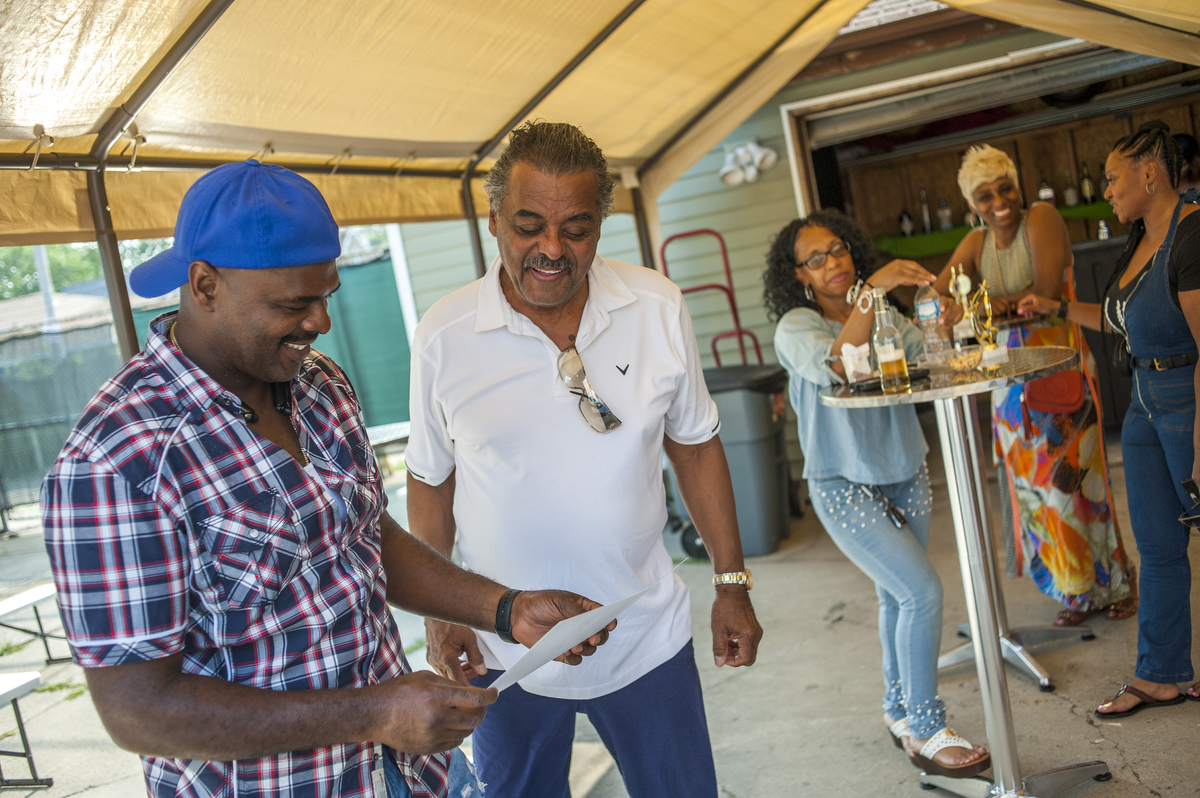 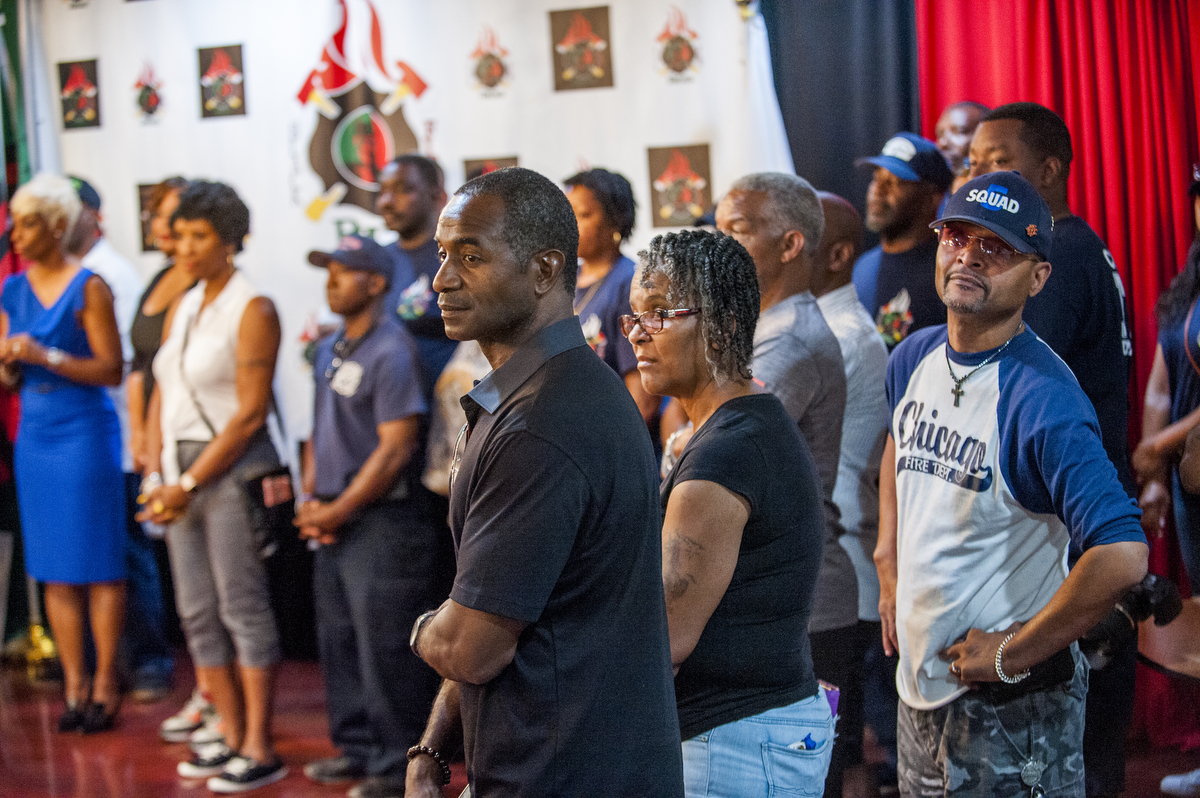 John Coombs is the past president of a group of black firefighters in New York City. He spearheaded a lawsuit that forced the department to create a more equitable entrance exam and appoint a hiring monitor.

Coombs has come to Chicago 25 times over the past year to support the brigade. “I’m invested in it socially, emotionally, spiritually,” he said.

He keeps the latest demographic numbers for New York City’s fire department personnel in his wallet. 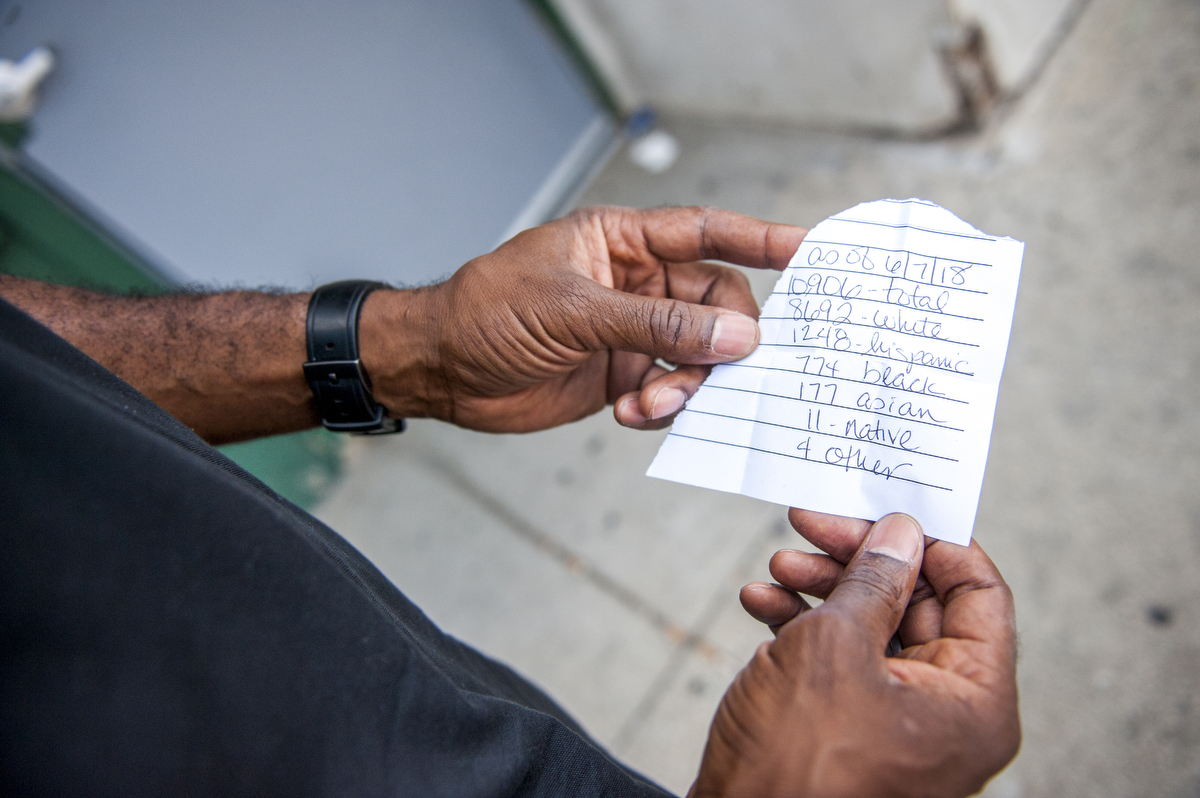 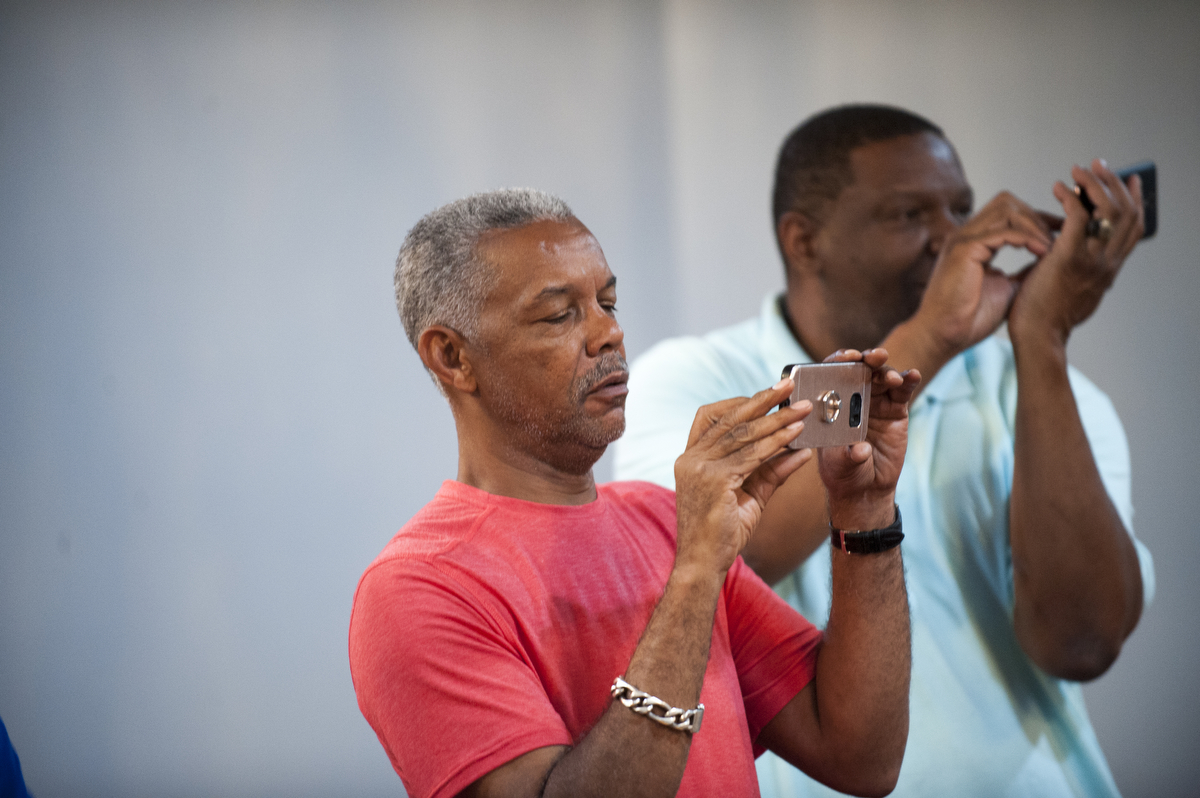 Retired firefighter DeKalb Walcott Jr. documents the history and stories of the department’s black firefighters. He’s writing a book about Engine 21, the first black fire company in Chicago and inventors of the sliding fire pole. Walcott wrote, “These men proved that when given the opportunity, they were just as competent and fully capable of preserving life and property.”

The son of a fallen firefighter 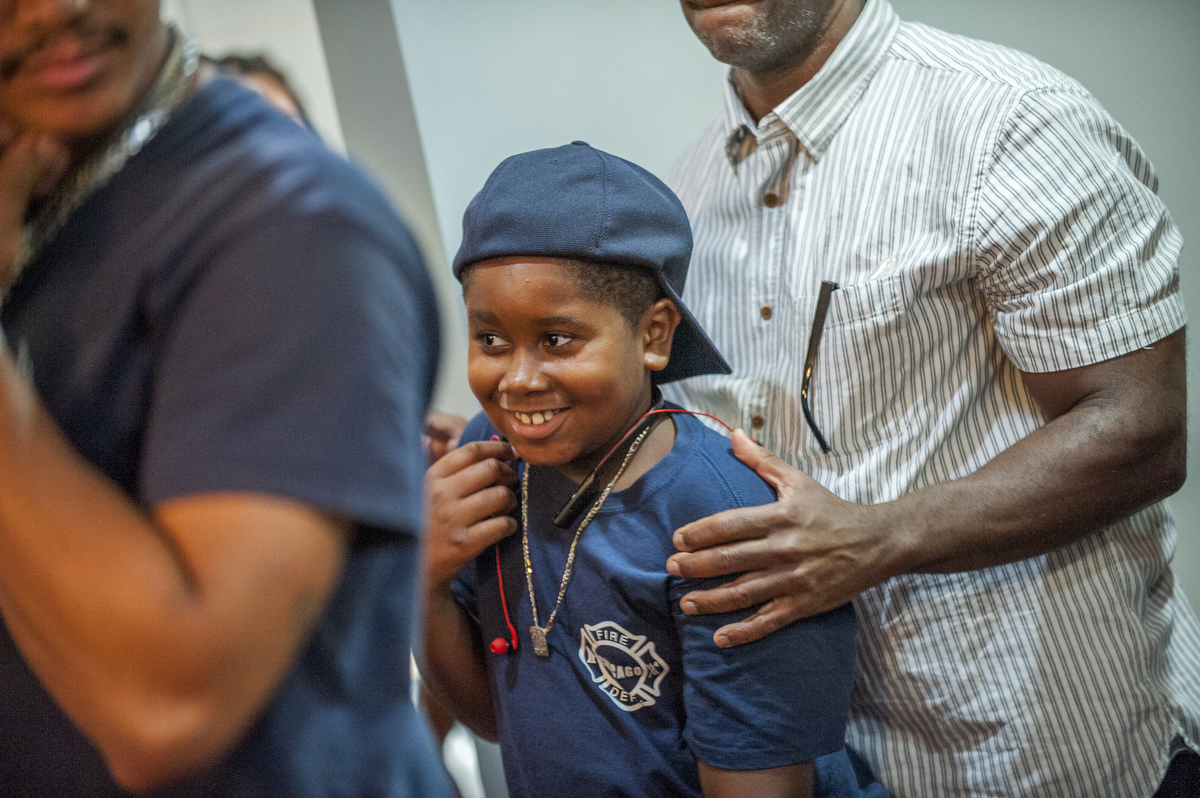 Nine-year-old Torey Ankum is the son of Corey Ankum, who died in 2010 while fighting a fire. Torey, who is entering third grade, helped Lt. Curtis paint the building and grout the washroom. Curtis said the clubhouse exposes Torey to male role models: “He finally felt like there were some men around him. He had a chance to feel the brotherhood.”

Curtis keeps a picture of Torey’s dad in a pile of photos in his office. 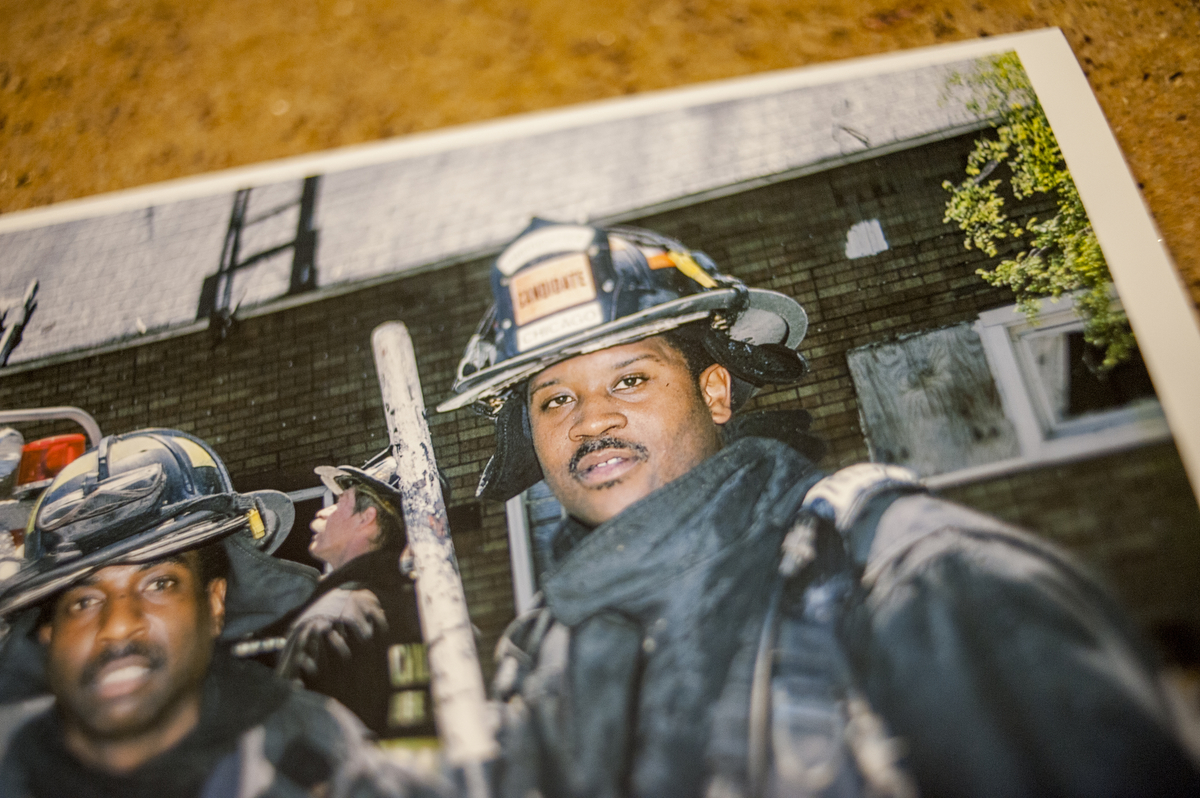 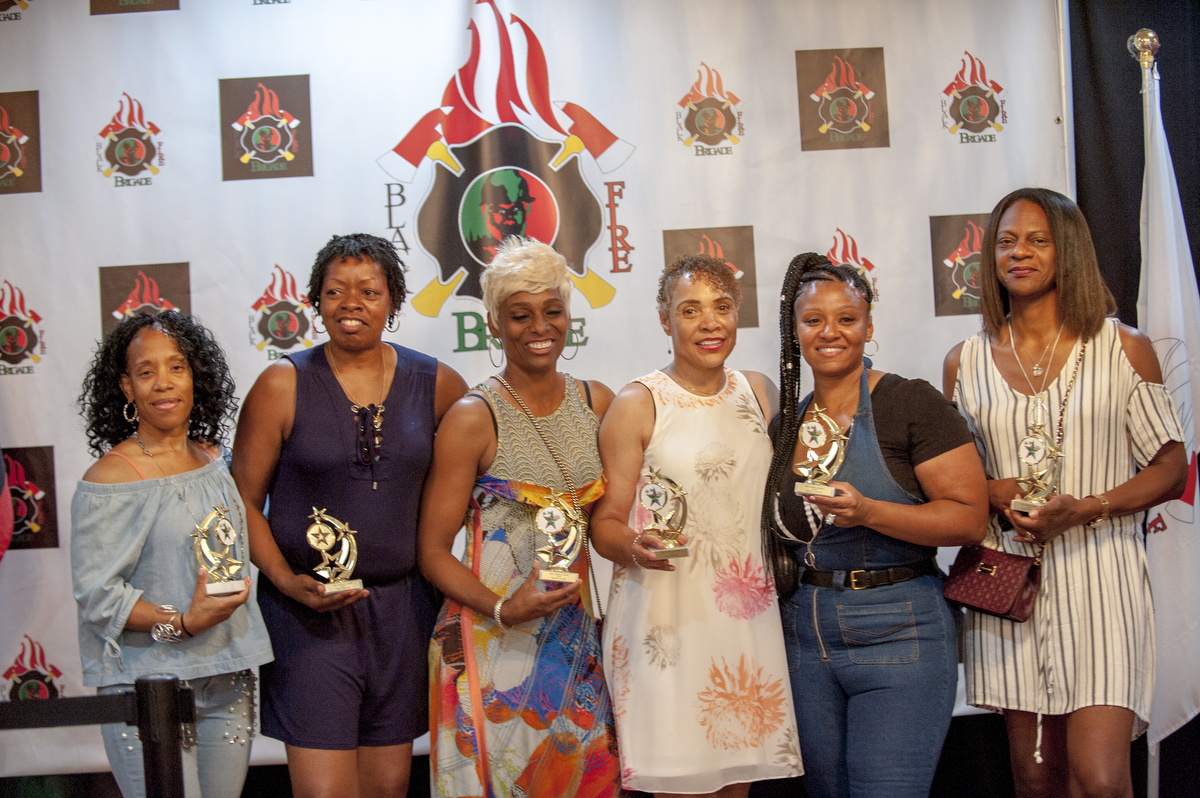 The clubhouse serves as a space to recognize firefighters, including members of the Ladies of Godfrey. The group of black women came into the Chicago Fire Department after a series of lawsuits found that they had been discriminated against, both as African-Americans and women.

The next generation and their mentors 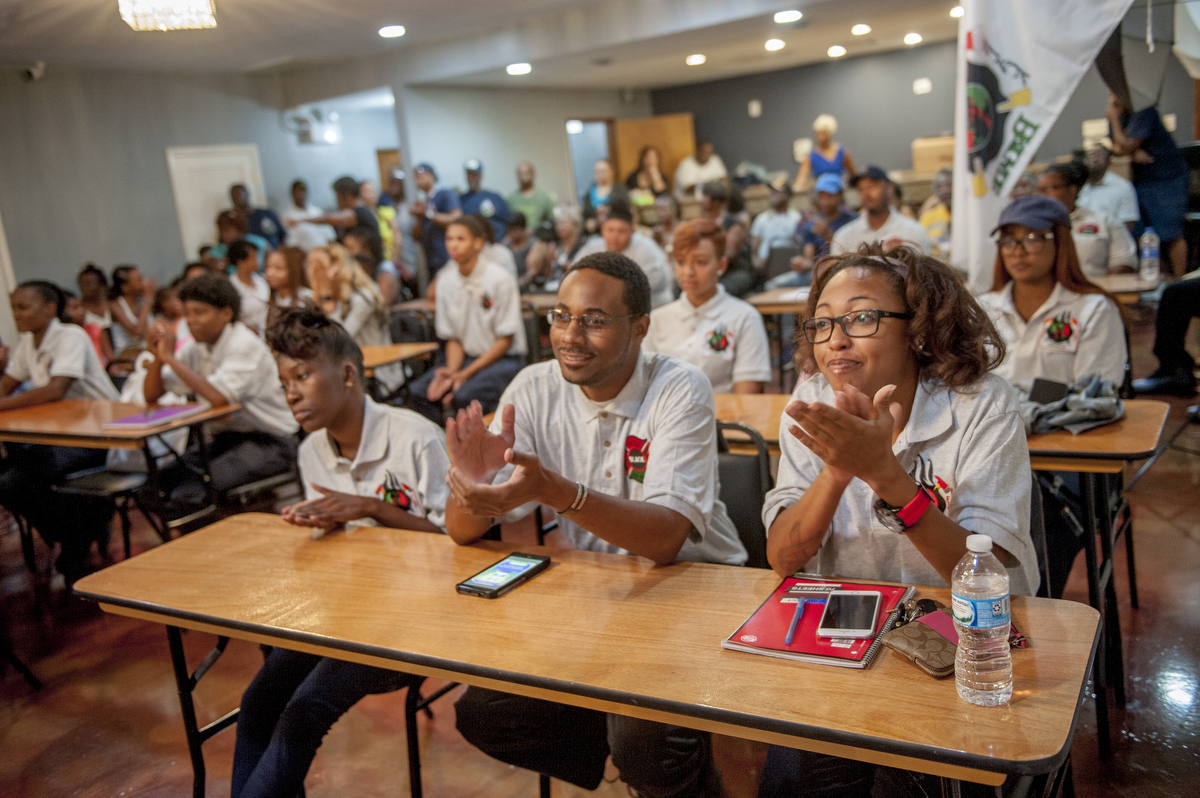 Brigade members have funded scholarships for dozens of students to train as emergency medical technicians. Begun only this summer, there’s already a substantial waiting list for classes, which are held twice a week.

During an early morning emergency call, veteran paramedic Vickie Beals met and befriended a young woman on the scene who told her: “I wanna do what you do. I wanna have better for me and my children.” Beals told her about training through the Black Fire Brigade and said, “If you do this much, I’ll meet you the rest of the way.” 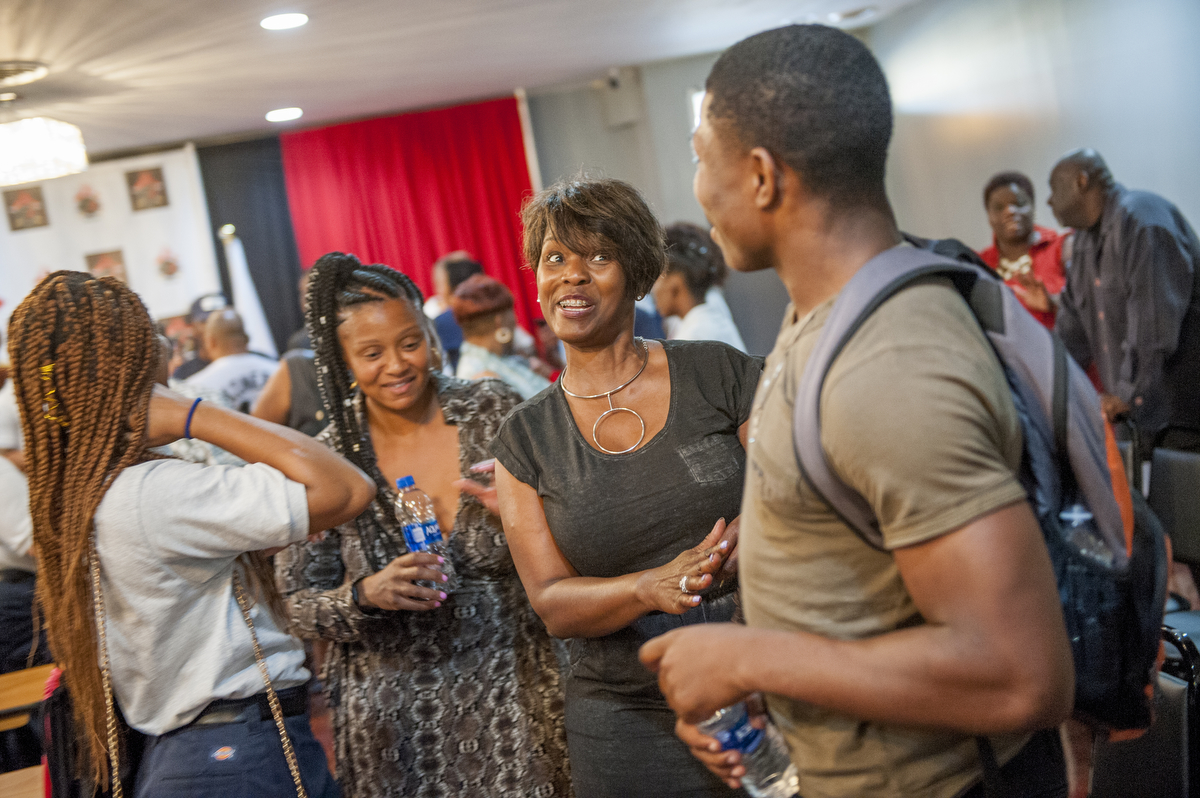 Later, Beals connected with the young woman, 25-year-old Tashonna Williams (below, left), a single mother of two. Beals told her, “If you need pants or you need shoes or you need a babysitter, I got you. You came this far, I got you the rest of the way, along with all of my colleagues.” 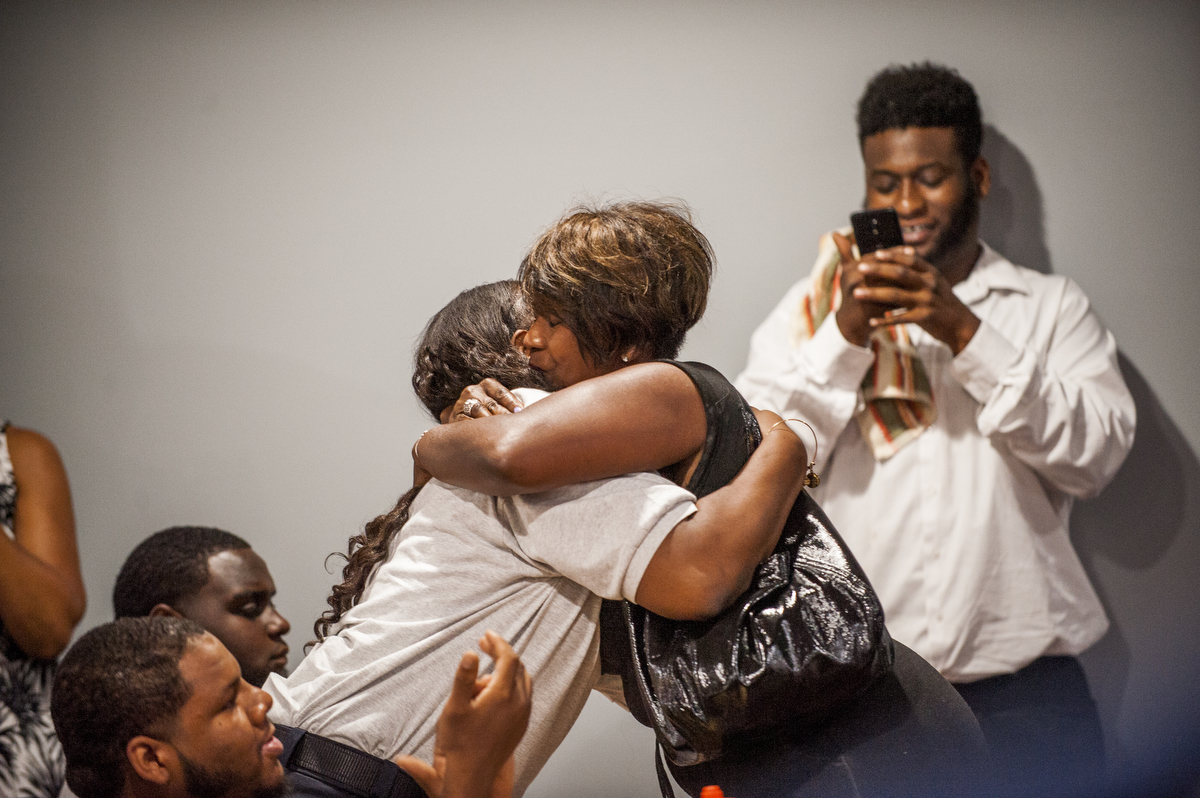