On warm days, Chicago teenagers from all parts of the city like to head downtown to visit Millennium Park and Water Tower Place, especially if they have nothing else to do.

These teens are all looking for fun, of course. But for many, especially those from the city’s South and West sides, it’s also about finding their place in Chicago.

Oftentimes, teens go with just a few friends. But sometimes, large groups of teens show up all at the same time. And when that happens, things can get out of hand.

Like last April, police said hundreds of teens turned up in the Loop and the police also turned out in force. Most of them were black, according to social media and news reports. Thirty-one were arrested, most charged with disorderly conduct.

This led to outrage on all sides — from those who said the teens were racially profiled to others who were glad to see a small group of disruptive kids in the crowd arrested.

The arrest raised many questions: How did all those teens know to go downtown all at once? And why is downtown particularly popular with kids from the city’s South and West sides?

The answer to the first question comes down to something called “trends” — large teen-led gatherings that are particularly popular among black teens.

“That’s my thing — I’ll be at trends all summer,” Cierra Mosley, an eighth grader from Englewood, said as she and her friends headed to Michigan Avenue on a recent summer afternoon.

Cierra and her friends get flyers on social media inviting them to meet at a beach, a park or Water Tower Place. Those flyers often include the word “trends” on them, weather information, handshaking emojis and warnings in caps saying: no fighting. Some spread like wildfire, easily and quickly drawing large crowds.

And why are the kids so quick to react to the trend flyers?

There’s little for them to do in their neighborhoods, they say. 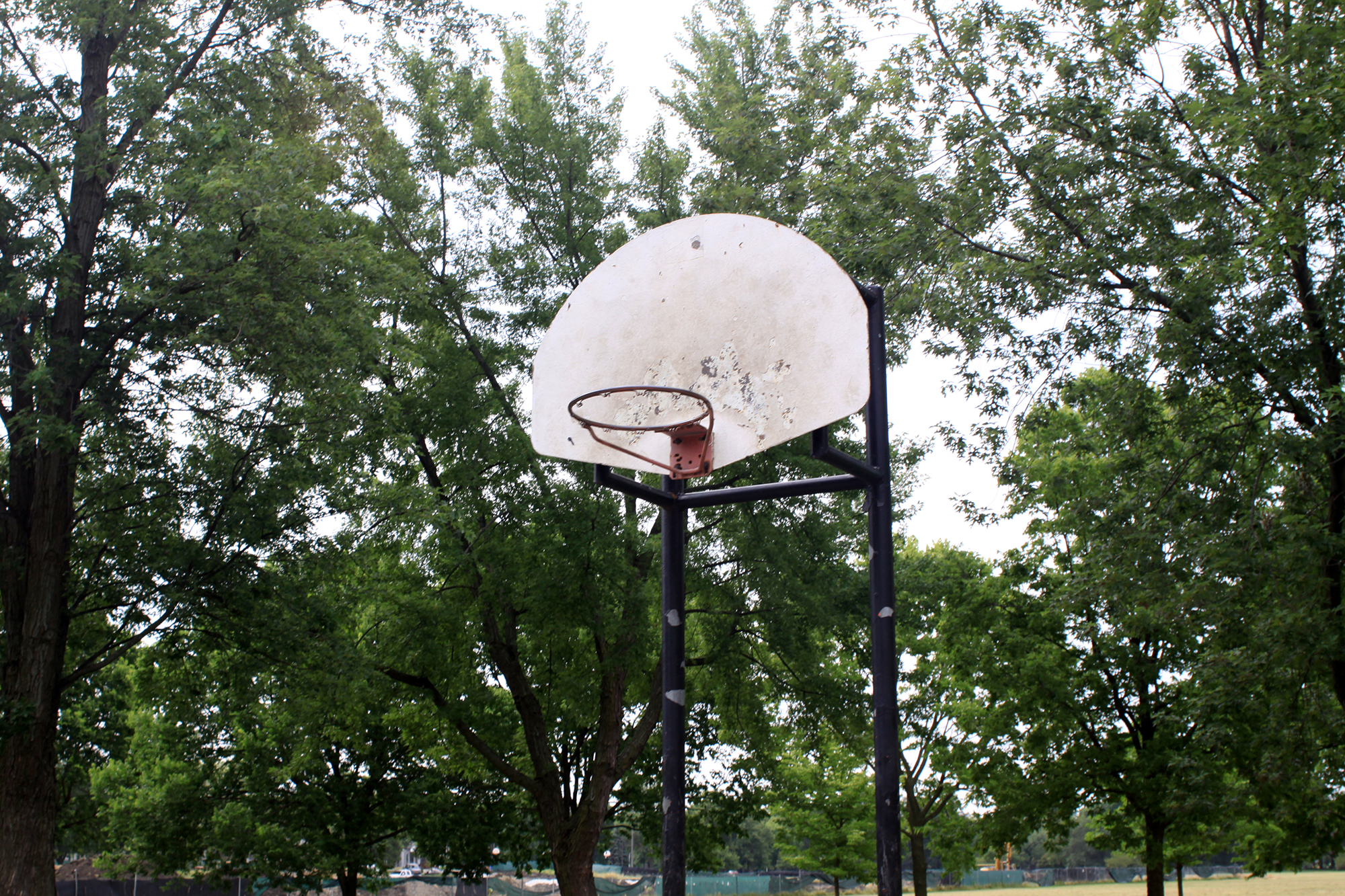 Cierra’s friends from the South and West sides said there are few community centers or places to hang out in their neighborhoods. And the parks are a non-starter.

“There is usually vandalism over the swings, over the slides, there is usually broken material … there is trash and there is a lot of people soliciting,” said Tyrianna Rodgers, who was with Cierra for a girls-only afternoon downtown. “It just doesn’t look like the place where you would send your kids and say OK, ‘You could chill here.’”

So they head downtown. They just want to be kids, they say. And downtown is the best place for them to be just that. 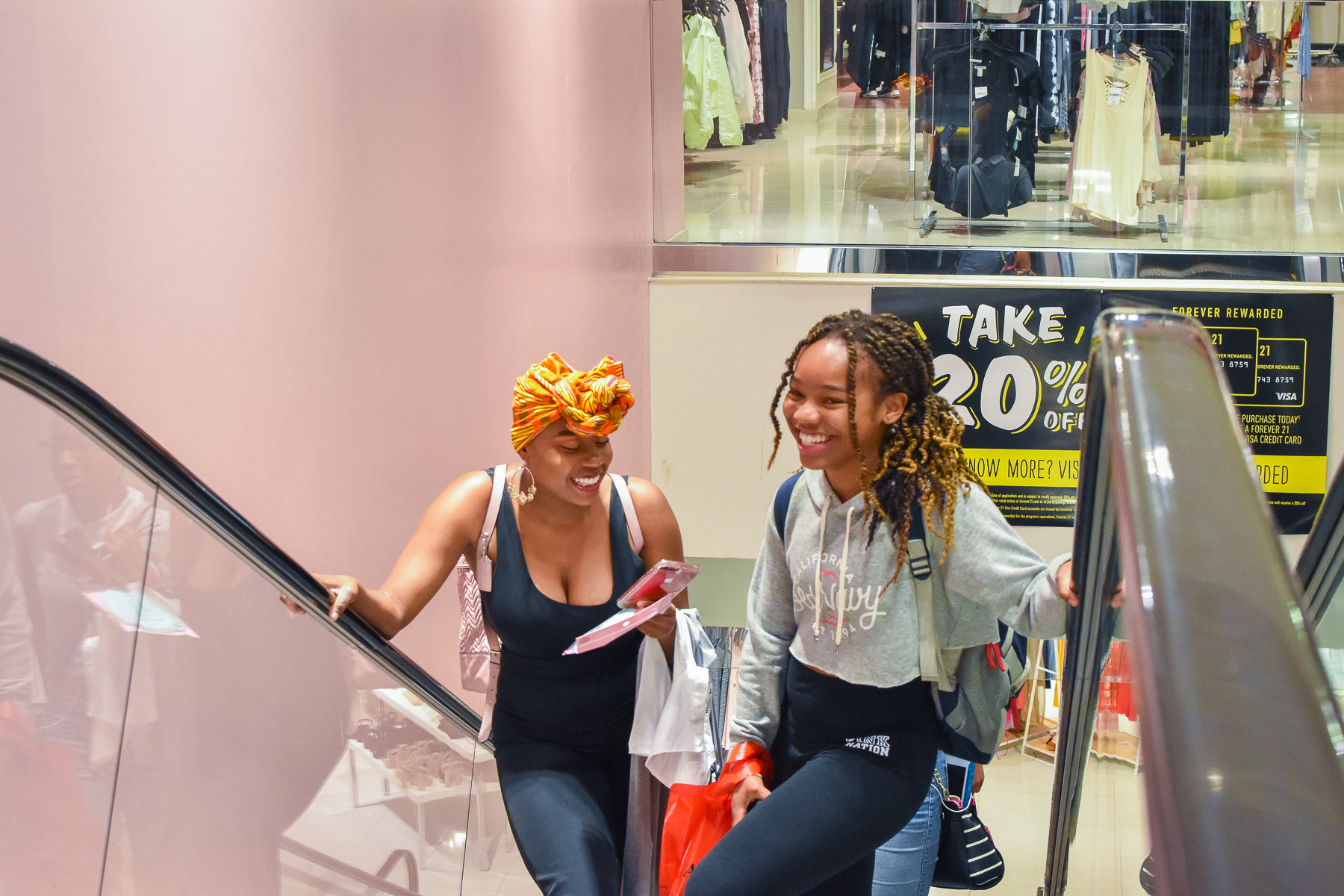 “Every time there is a trend somebody gets hurt”

Earlier this summer Cierra got a trend flyers saying: “Trend, trend, trend, we are at North Avenue Beach – no dusties. Get there, July 9th 2:30 until ... BYOW and BYOB.”

But Cierra’s friends warned her. Those events can lead to trouble..

“Every time there is a trend, somebody gets hurt,” Tyrianna explained. “It’s too many people in one area.”

The meetups run the gamut and some go off without a hitch: a birthday bash, a meetup at a movie theater, an invitation to feed the homeless downtown or a water balloon fight at a local park. A group of about 10 teens that calls itself “Positive Trends” organizes some of these events. 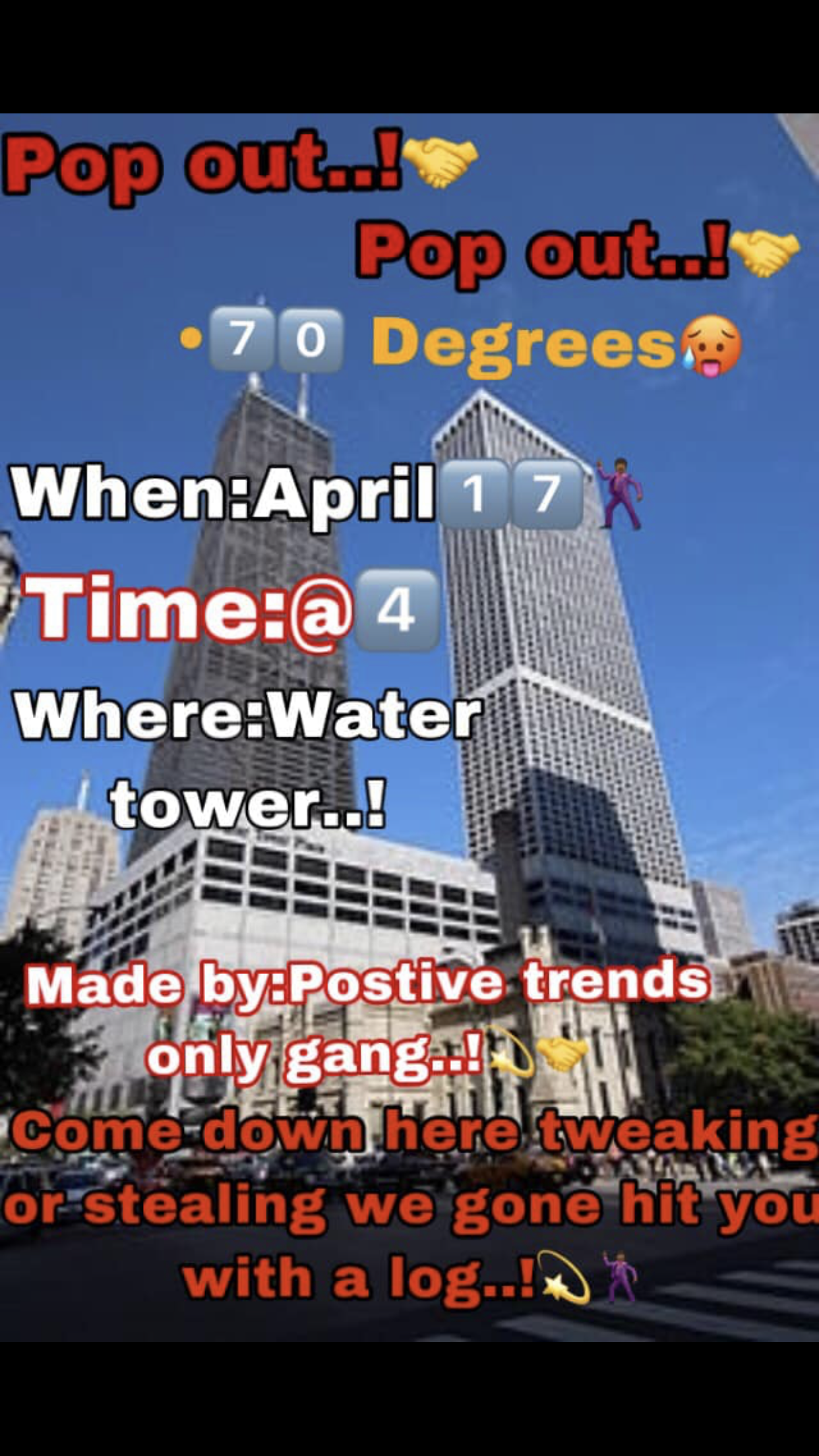 Why is there a police response?

Teens weren’t the only ones who got a trends flyers before the April Loop incident. Police saw it too.

Police Supt. Eddie Johnson said they were ready when the teens showed up.

“We knew those kids were coming down there,” Johnson said at a press conference a few days afterward. “It was no accident that we had that large presence down there. Social media drives a lot of that type of activity, so you know we just have to do a better job of monitoring that.”

And it’s not just the police paying attention. Police say community members watch for the trends flyers and alert the department when they see one.

One person identified by WBEZ takes it upon herself to find these flyers online and then tags the police on Twitter. She wouldn’t agree to an interview.

It’s hard to know how often police monitor social media. The Police Department said it has an obligation to ensure the safety of the public when it’s notified of these gatherings.

But Karen Sheley, director of the Police Practices Project with the ACLU of Illinois, said it’s concerning when police monitor social media because it raises questions about teens’ First Amendment rights.

“When the government starts gathering information about people based on speech that isn’t connected to criminal activity, that raises red flags,” Sheley said. At the very least, she added, police need to be more transparent about their monitoring activities.

“That’s a very serious thing,” Sheley said. “It needs to be contained, reviewed, documented and evaluated by the department.

When asked about monitoring social media, the Police Department pointed WBEZ to its guidelines on using social media, which say police who use social media as an “investigative tool” for things like gang participation or retaliation, searching for missing or wanted individuals, online crimes like cyberstalking, and videos or images of crimes posted on social media by witnesses. The department also says it will only use “publicly available open source material.”

Sheley and other advocates also are asking why the city reacts to these teen gatherings with police. Advocates say the city is missing an opportunity to transform these teen activities into something fun and positive.

For example, a few days after the April incident, on Easter, another trends flyer appeared on social media inviting teens to meet at Rainbow Beach on the South Side on an unusually warm Sunday.

Police got hold of that flyer. That same day, the beach was closed down, according to a story in Block Club Chicago. When WBEZ asked how Chicago police knew a gathering was planned for Rainbow Beach on Easter, the department shared the trends flyer.

Trying to find a place in their city

With all the restrictions and police response, teens are left wondering: Is there really a place for them in Chicago?

Taji Gaines, a youth mentor at Chatham Academy on the South Side, said he understands why hundreds of teens followed a random flyer to meet others in the Loop.

But Gaines said it’s not just about giving teens a job. They also need to feel safe in their own community and have more public spaces where they can hang out, play music and be creative without restrictions — like teens do in other parts of the city.

“Our Chicago is vastly different from the Chicago downtown, Lakeview, Logan Square, Wrigleyville,” Gaines said. “They can’t just leave their house and go around the corner and see all the shops that you see in Wrigleyville. If we had something similar to the Water Tower in our community, they wouldn’t go downtown.” 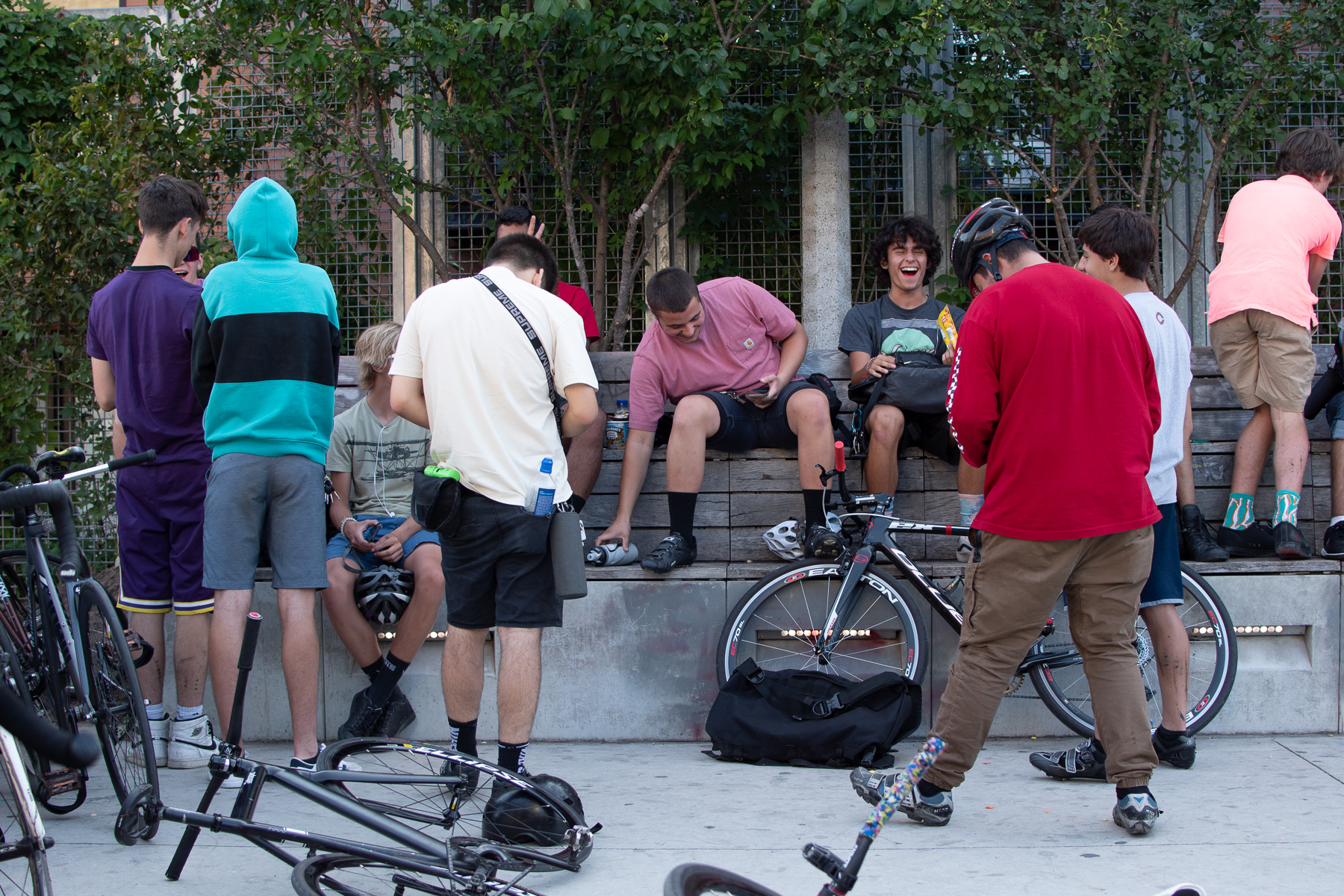 That’s why Andrew Taylor, a 17-year-old from the Chatham neighborhood on the South Side, heads downtown. He’s into fashion and loves going to the malls, especially Water Tower.

But he hardly goes to Water Tower now that it has new restrictions. Getting to the Loop from his home in Chatham takes too long — he can rarely get to the stores he wants to check out before the restrictions kick in at 4 p.m. He knows by memory many of the restrictions at the malls and movie theaters.

When he makes it to Water Tower and other malls, he notices that other people seem threatened by his presence — they look at him suspiciously. “I am not stealing. I am not being a thief. I am not lying. I haven’t broken anything. I am not vandalizing,” he said.

That feeling of being judged is frustrating, he said. That’s why teens sometimes act out.

“You get a real push back from the youth — that’s why a lot of youth get arrested and disrespect the police,” he said.

Teens, he said, are just trying to have fun.

Shannon Heffernan contributed reporting to this story. Shannon is a criminal justice reporter for WBEZ. Follow her at shannon_h.