Esperanza Villalobos sat at her kitchen table a few weeks ago in west suburban Cicero pulling out doctors’ appointments and hospital discharge instructions from a stack of medical records. She flashed back to an agonizing time six years ago.

Villalobos, now 47, said she was a week away from having surgery to remove a cancerous breast tumor when her husband lost his job — and the family’s health insurance.

For the next two months, she searched for a hospital that would take on her case and all the extensive — and expensive — care it would involve. Surgery. Radiation. Lots of doctors’ appointments.

“It is very difficult when you know that you have cancer,” Villalobos said. “Time is running out. … That’s what deteriorates you even more, not so much the illness, but the stress of [not] knowing what to do.”

She said three hospitals turned her away since she had no way to pay. A friend from church suggested she try Stroger Hospital, the county’s main public medical center and a longtime staple for the poor and uninsured.

Stroger treated Villalobos, but a shift could be in the works. Stroger and Provident, the other hospital in the Cook County Health and Hospitals System, are providing so much care for free that officials inside and outside the county-owned network are waving warning flags.

The health system is set to provide about $503 million this year in what’s called uncompensated care, or what it writes off, county records show. The tab is a mix of free treatment for people who are typically uninsured, and debt from insured patients who can’t afford their bills as well as insurance companies that won’t pay them.

The amount of free care climbed around 60 percent in five years and isn’t expected to slow, county records show. It’s a troubling trend and the opposite of what’s happening at hospitals nationwide.

Potentially looming changes in Cook County could mean patients like Villalobos could be left in the lurch.

Here is a look at some of the factors fueling the big rise in free care at the county health system. 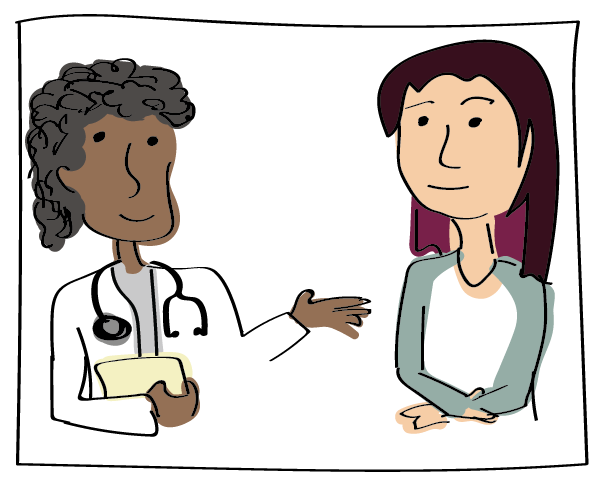 The county health system is one of the largest public health systems in the nation. It’s set to generate $2.5 billion in revenue this year. Stroger has the busiest emergency department in Illinois.

For the past several years, the county health system has taken on a greater share of free care in the county, while other public and private hospitals provide less, state records show.

Dr. Jay Shannon, CEO of the Cook County health system, said he believes hospitals are sending more uninsured patients his way. It’s notably patients like Villalobos, those who need surgery or have cancer. People who are expensive and need more than a quick office visit.

“I can tell you at this event we had last night, I had two physicians who came up and told me exactly those stories,” Shannon said in his office in June.

Shannon, an asthma specialist at the county health system before climbing the administrative ladder, can’t say which hospitals are to blame because his staff doesn’t track it. But he points to state data that shows the disparity.

There are 68 hospitals in Cook County. They’re mostly private and nonprofit. In 2016, Stroger and Provident provided nearly half of all the free care in the county, totaling about $266 million, according to a WBEZ analysis of the latest state records. Stroger shouldered the bulk of it, with $246.9 million.

No other hospital came close. Northwestern Memorial Hospital, one of the richest hospitals in Chicago, was a distant second to Stroger with $38.1 million. That’s almost seven times less than Stroger.

Five years earlier, other hospitals picked up more of the slack. Back then, the county’s two hospitals provided about 40 percent of all the free care.

Here's another way to look at it. Hospitals are dedicating so much less of their budgets each year to free care that more than half of the hospitals in Cook County set aside just 1 percent or less in 2016.

An influx of patients 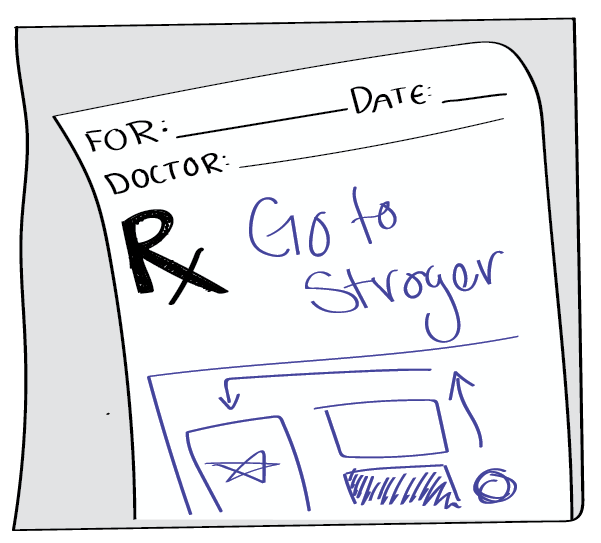 Dr. Pilar Guerrero, who has worked in Stroger’s ER for about 16 years, sees this firsthand.

“It used to be more blatant, and people used to just come with that kind of, ‘Here’s a map of county, and they told me to come here,’” Guerrero said. “I think now a lot of places have a way of discharging their patients, giving them a follow up (appointment), but knowing that the patient can’t possibly afford that. So what’s the patient to do, but to come to county.”

Here’s the thing: Hospitals don’t have to provide free care. But they usually do to help keep what can be lucrative property tax breaks as part of a hospital-friendly 2012 Illinois law.

Hospitals also don’t have as many uninsured patients since more people qualified for coverage under the 2010 Affordable Care Act and were required to have it.

Still, there are about 428,000 people in Cook County who remain uninsured, according to 2016 U.S. Census Bureau data, the most recent available. That includes undocumented people who don’t qualify for government aid to help cover medical expenses.

Hospitals declined to explain what’s behind their varying amounts of free care. But they highlighted other work they’re doing for the poor. Take Stroger’s two neighbors a few blocks away.

The University of Illinois Hospital provided about $8 million in free care in 2016, a fraction of Stroger’s nearly $247 million tab. U of I Hospital CEO Michael Zenn said in a statement that the medical center helps pay to house homeless patients and helps cover the cost of medicine for others.

John Colombo is a retired law professor at the University of Illinois at Urbana-Champaign who has closely followed the controversy over how much free care hospitals provide. He said he wasn’t surprised to hear it’s dwindling overall.

“Why would you devote more money to (free) care if you don’t have to?” Colombo asked.

Back to the bills the county health system doesn’t get paid for. It’s tough to fully understand who is more to blame: the health system or insurers denying their claims.

Here’s part of the issue. Billing has gotten a lot more complicated. The county used to treat mainly two types of patients: the uninsured and those on Medicaid, the government health insurance program for the poor and disabled. So the county largely just billed the state.

But Illinois Gov. Bruce Rauner has largely privatized Medicaid, so private insurers are covering more of the program’s enrollees. This expands the number of insurers hospitals need to bill. The county health system is one of these insurers, too. Its Medicaid plan is called CountyCare. 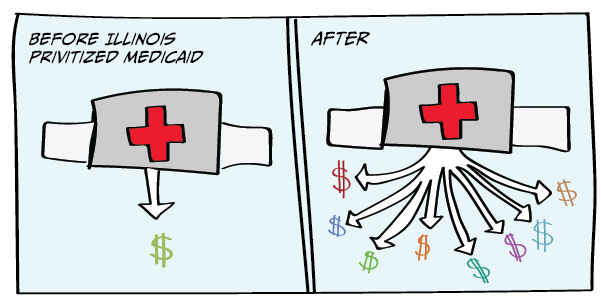 In March, Cook County Inspector General Patrick Blanchard blamed deficiencies at the health system for why insurers denied at least $175 million in claims in 2016 and 2017. The health system didn’t register or schedule patients properly nor code claims submitted to insurers correctly, Blanchard found.

Shannon, the county health system chief, disputed some of the findings and said the health system was forced to change rapidly, while other hospitals have been billing multiple insurers for years. And no hospital collects all the money it’s owed. Private Medicaid insurers denying claims is a national problem, Shannon said.

“I think they do it because in their business model, they find that it works,” Shannon said.

In other words, it saves insurers money.

But his team would not say which insurers refuse to pay and how much money they’re holding back. Instead, health system spokeswoman Caryn Stancik provided a chart showing that the issue is improving. From December 2017 to June, the amount of initial claims insurers denied peaked at 42 percent and declined to a low of 22 percent.

Stancik also would not provide details on which providers the health system’s CountyCare insurance plan denies and how much money that amounts to.

County health system leaders point out that even patients with private insurance can’t afford it, contributing to the increasing pile of unpaid bills.

People who bought plans on the public health insurance exchanges born out of the ACA face steep deductibles they must pay before their insurers start to share the cost of their medical care.

The county health system has at least 70 patients who bought exchange plans, but need help paying their medical bills, Stancik said. So the health system bills their insurance, then helps the patients pay the rest based on their income. 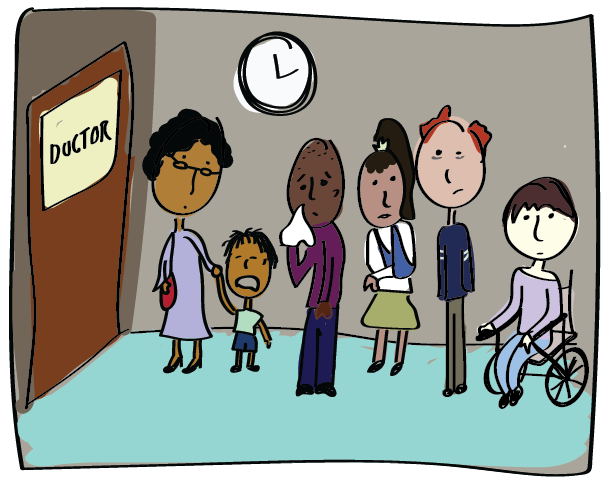 “There’s no such thing as free care,” said Rachel Garfield, a senior researcher at the Kaiser Family Foundation, a nonprofit that tracks Medicaid and health reform. “The hospital has to figure out a way to cover that cost.”

At the county health system, patients could wait longer to see a doctor or even get turned away if other hospitals don’t take on more uninsured patients. Shannon said his doctors can’t provide an infinite amount of care for free.

He could ask county commissioners for more money. But Laurence Msall, president of the Civic Federation, a local watchdog on government finances, harkened back to a disastrous tax on sugary drinks last year that drew so much ire from taxpayers that county commissioners repealed it.

Msall then rattled off a litany of other tax increases to pay for everything from pensions to schools. “Throughout Cook County and Illinois, there is tax fatigue,” he said.

Villalobos, the uninsured Cicero resident who had a tough time finding a hospital to treat her cancer, hopes county leaders understand how important their health system is. She said she doesn’t have a backup plan if Stroger makes it harder for her to get care.

“The medical expenses are very high,” Villalobos said. “I don’t have the financial stability to pay for my treatments. If Stroger didn’t offer the services that it offers, I think that not just me, but many, many more people could be affected here in the community.”