The students at Banner Academy in Chicago’s Austin neighborhood are all former dropouts, but they’re also aspiring CEOs.

This alternative Chicago Public Schools program is built around entrepreneurship, allowing students to catch up on credits by developing their own small businesses. The products are even sold at a storefront the school rents in the neighborhood.

This focus on job skills is just what school officials have said they’d like to see in all alternative schools after an internal audit found widespread attendance and performance problems at many of these schools.

The city has had full-day alternative schools for decades, but many of the city’s newest schools for dropouts require students to come only half the school day, and most of the work is done online. This more flexible design was meant to help lure students back.

But many educators don’t agree with this approach. Flavian Prince, the vice president of education at Banner Academy, called it “institutional racism.”

“Nobody else would create these types of schools for any group of people in this country,” Prince said, adding that dropouts, most of them black and Latino, need more than just a half day of school on the computer. “Nobody would want this for their own kids. Yet, it becomes a policy.”

This story is part of a WBEZ Education series looking at the costs of Chicago’s newest alternative schools. Read the others in the series:

Last November, Banner opened a retail store called Mzuzi that is about 10 blocks from the school, at 5459 W. Chicago Ave. The store’s name means “innovator” in Swahili, Prince said. 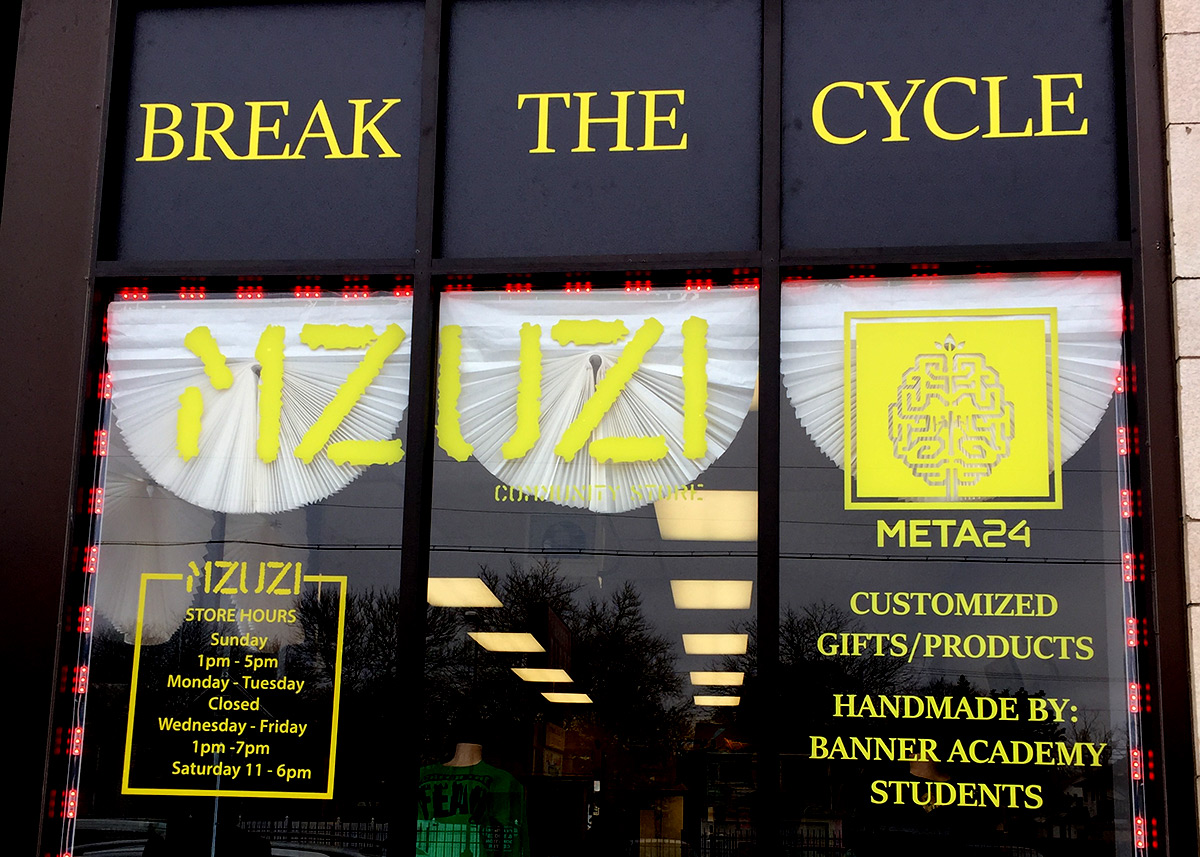 All of the products inside the store are made by former dropouts.

Dozens of Banner students are earning credits toward their diploma by building their own small businesses. They’re known as “CEOs” at the school, and they have the ability to “hire” newer students who haven’t yet reached CEO status. 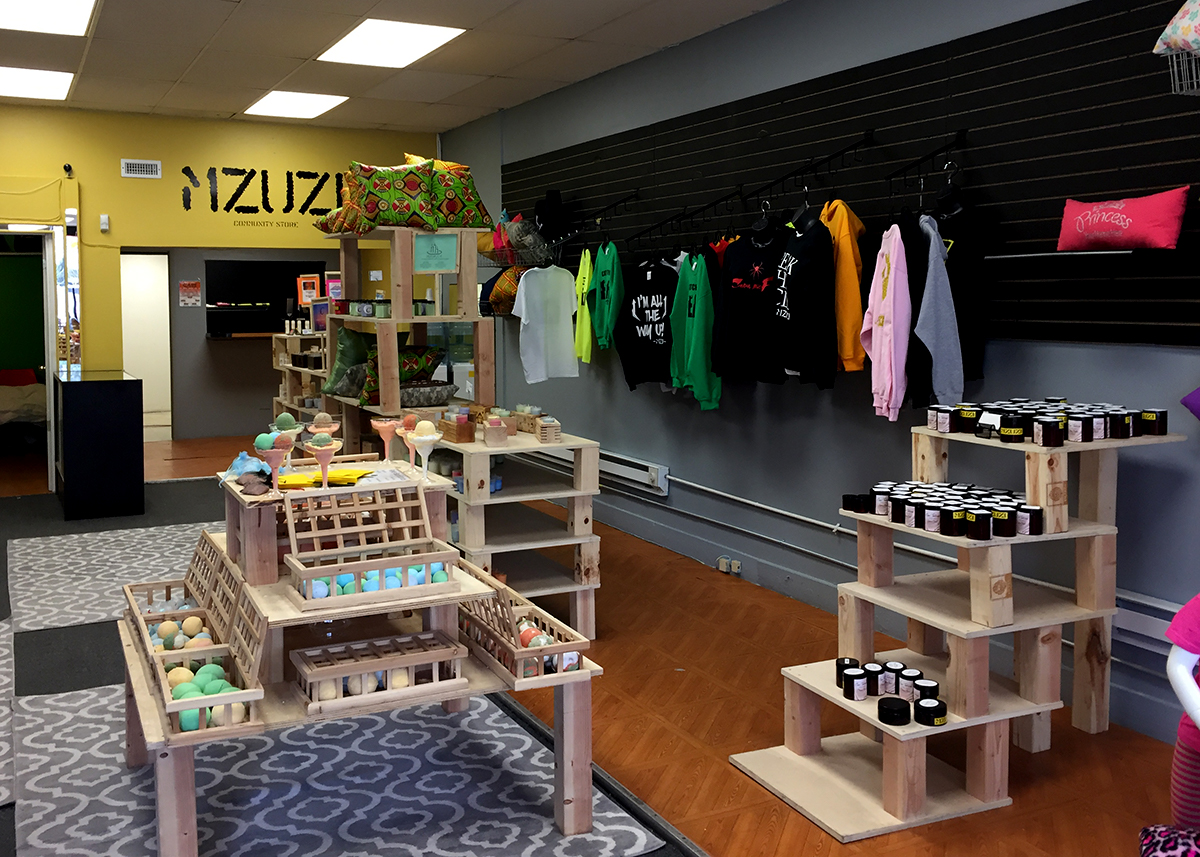 For example, DeJon Riley has a business called Mr. & Mrs. Gleam that sells soap he makes in a classroom production lab. He also designed his own packaging. 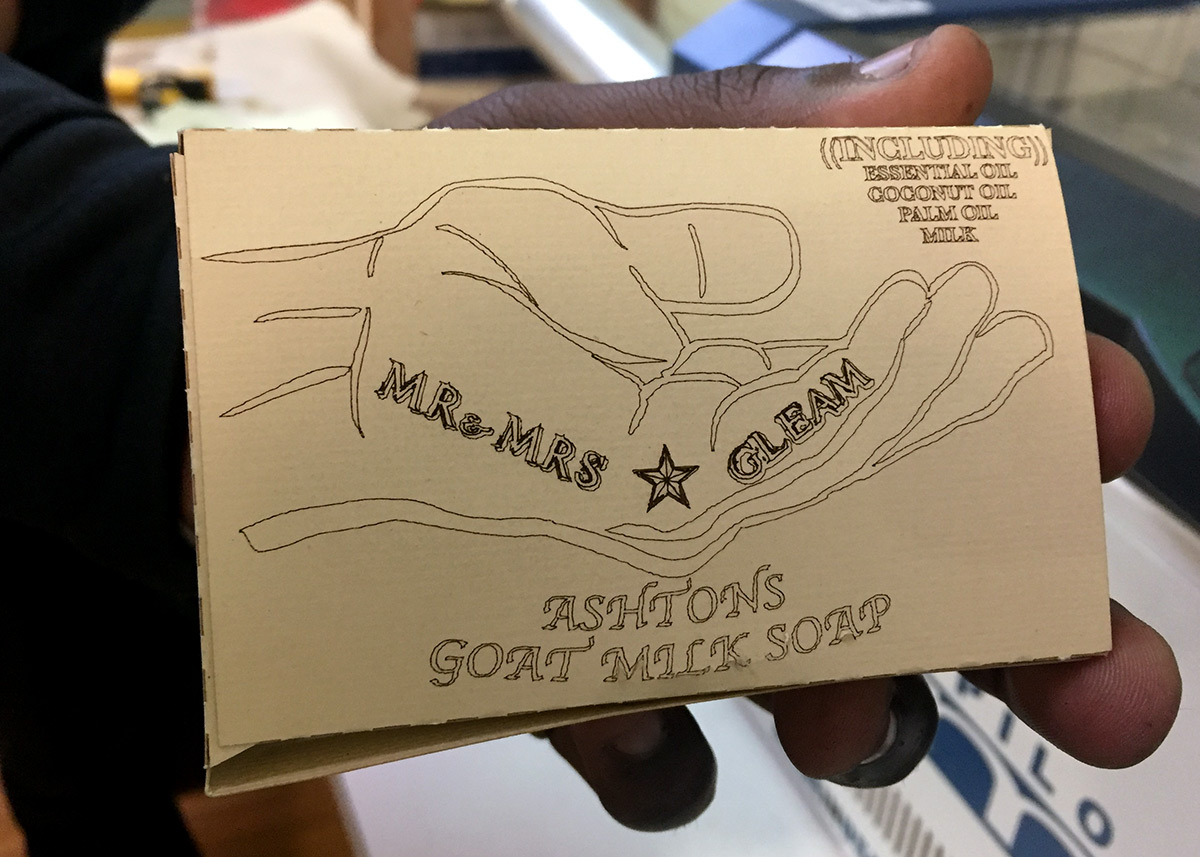 The courses Prince developed for Banner are built around real life job skills and entrepreneurship so students can really take ownership.

“I have no better way to say it, but many of our students come in unemployable,” Prince said. “Our job is to not just hand them a diploma. Our job is to help them meet with post-secondary success. A lot of our kids are not making it through college...So our best bet is to make them employable with good career jobs.”

Banner does struggle with attendance. The recent district audit found between 42 percent and 47 percent of the students enrolled were present on days auditors came to count attendance.

“Attendance is tough,” Prince admitted, noting that kids move around a lot in Austin. “We have our core kids that just come all the time, but their lives are different.” 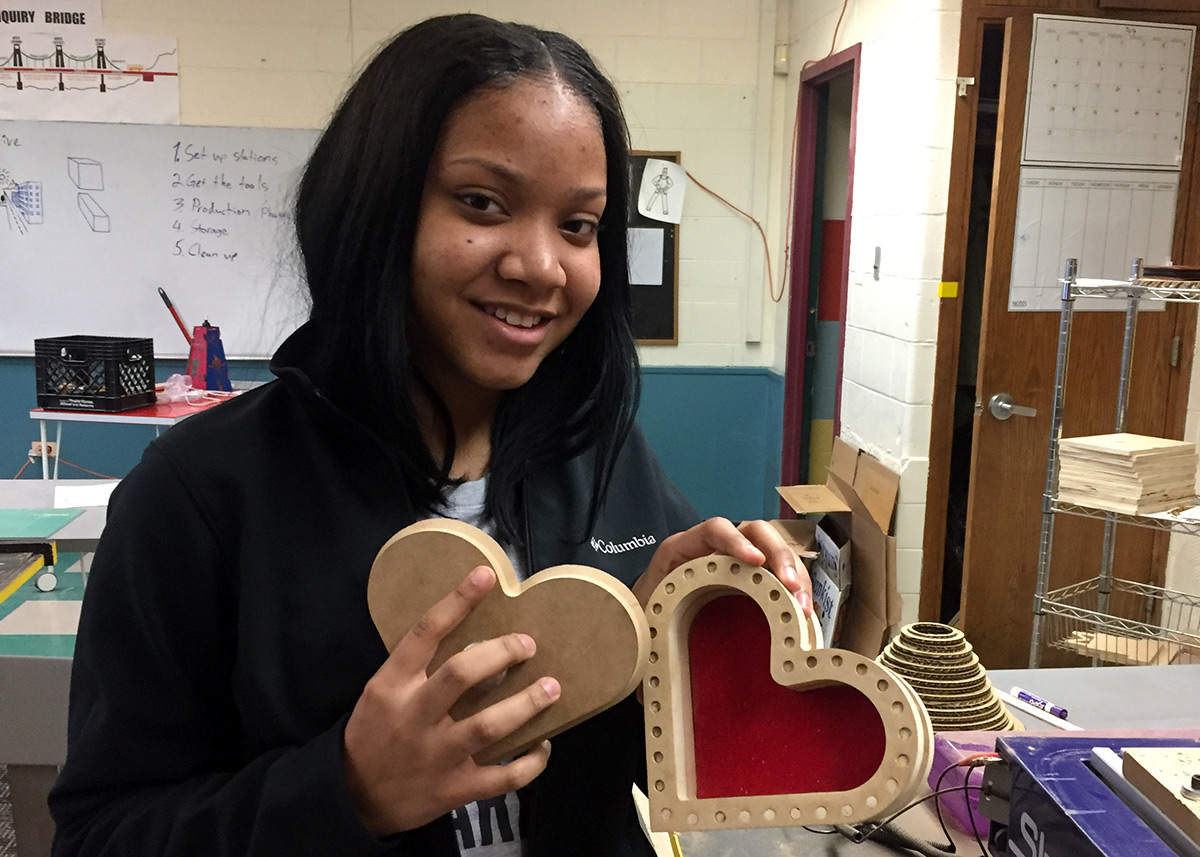 One of the more interesting inventions came from Cumyian Forte. He designed a hanging lamp called a “story lamp” that he hopes to sell to local restaurants. 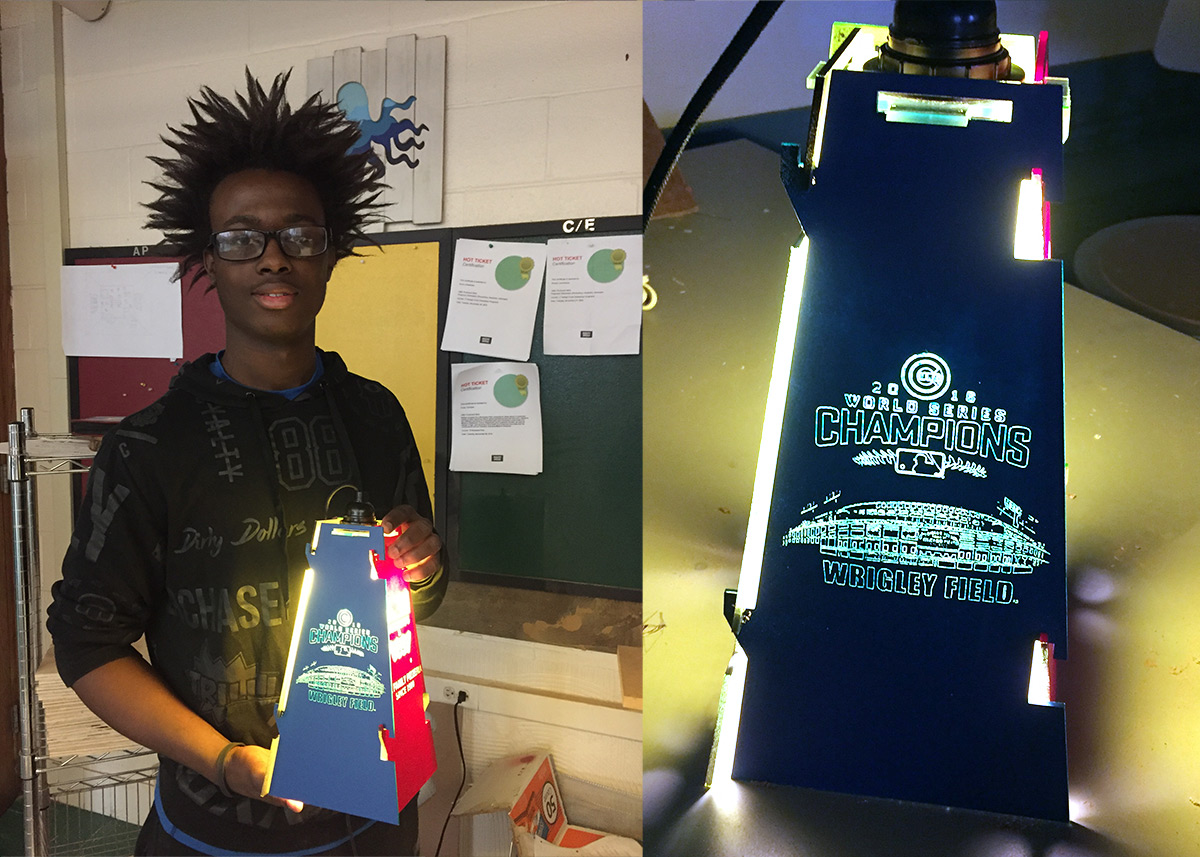 Bianca Wiggins said she dropped out of Crane Medical Prep High School last year after she stopped going to class.

“I had all F’s,” she said. “It was a struggle because it was a medical school and medical didn’t really interest me. Now, I get all A’s.”

Wiggins said she enrolled last fall with just 11 of the 24 credits she needed to graduate. Now, she said she’s on track to graduate in June.

She started a smoothie company called The Player’s Blend and runs it out of the school cafe during lunch and after school.

She rattled off her flavors and prices next to a poster she designed in the school’s production lab. The business plan and pricing structure was built into the courses she needed to graduate. 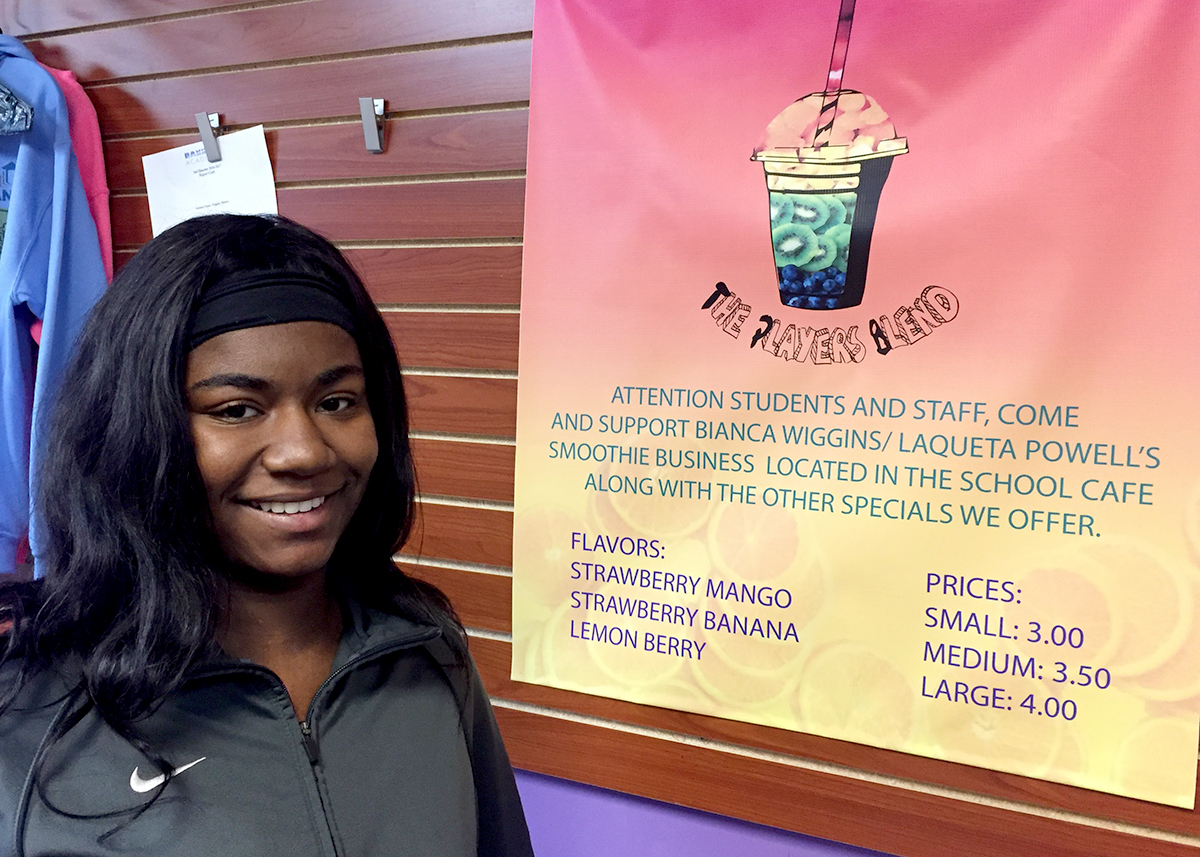 Job training like this is an important element of alternative education, said Jack Wuest, executive director of the non-profit Alternative Schools Network. What Banner is doing now is right on the mark, but not new, Wuest said.

“In the late 1970s, there were a lot of creative youth employment programs done under the Carter administration,” Wuest said, noting as examples a local home repair business and an office supply store where dropouts worked.

Job training is even more important in neighborhoods where there are few jobs for anyone, let alone teenagers or dropouts.

“Employment will make a huge difference,” Wuest said. “It won’t make a difference immediately, but you’ll build cumulatively, and year-by-year, [by] kids having work and getting the experience and doing something positive.”

Many of the companies running Chicago’s new half-day, online alternative schools had promised to extend their programs by offering things like job training and college counseling – but district officials said that’s not been happening.

Prince said he is glad the school system is examining what the schools for dropouts are offering students and he’s proud of what Banner has done.

“I think it’s very important for people to know that this population is capable of doing more than the policy provided for them,” Prince said.