The Chicago Field Museum is changing the way it talks about the history (and future) of Native peoples in Chicago and beyond.

“We are, in every sense, guests here,” said Richard Lariviere, the president of the Field Museum.

Last week, Lariviere addressed a group of staff, donors, and community members in the museum’s Native gardens. The Field Museum was, for the first time, holding a ceremony to officially acknowledge that the land the museum sits on is Native land.

“We will also continue to disavow the practices that harm Indigenous peoples,” said Lariviere, “starting with making renovations to our Native American Hall.” 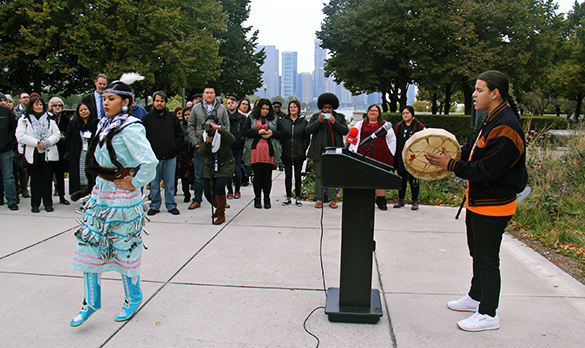 The Chicago Field Museum has begun a three-year renovation of the Native North America Hall. The overall design of the hall hasn’t been changed in more than six decades. When it re-opens, staff say the hall will tell a different story about Indigenous America than the one that it tells now. 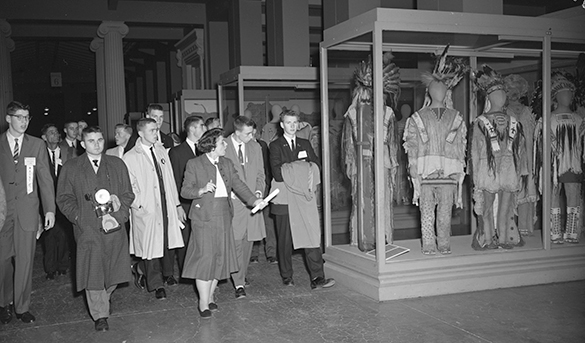 The Native North America Hall first opened in the 1950s under the name “Indians before Columbus.” Since then, it’s changed names and location, but the content has remained mostly the same. Museum staff called the hall “old-fashioned,” “outdated,” and even “misrepresentative.”

J. Kae Good Bear is a conservation technician and a member of the MHA Nation. She said what stands out to her about the current hall are the labels. She said there’s a focus on what European colonizers introduced to Native American tribes.

“It’s written like, ‘Because of Europeans, Indians were able to do this.’ And, I mean, I use the word Indians ‘cause that’s kind of the language that it’s written in,” said Good Bear. “I find it problematic for them to take credit for things that are not necessarily their accomplishments.”

There are also inaccuracies in the way items are displayed. 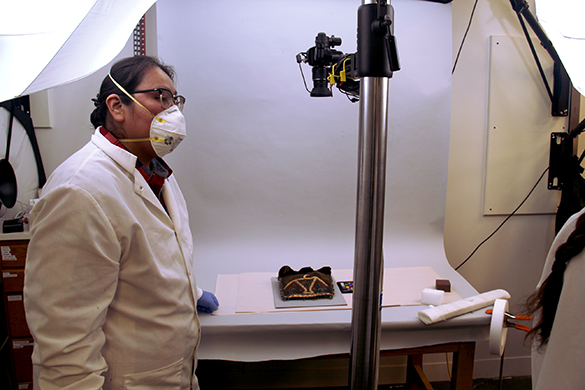 “I have a lot of people that point out that certain items of clothing are backwards, or something is upside down, or the moccasins are mismatched,” said Debra Yepa-Pappan, a community engagement coordinator who often guides visitors from Native communities through the hall. “So those are the kinds of things that are startling to people.”

A curator from the Crow Nation visited a few weeks ago, and Good Bear asked her about a pair of leggings the museum had on display.

The renovations of the Native North America Hall are still in the early stages, so not many decisions have been made about what the new hall will look like. But when asked what will change about the hall, several staff answered: “Everything.”

The museum has formed an advisory committee of curators, artists, historians, anthropologists, and community leaders from Native tribes across the U.S. and Canada. They’ve met three times to discuss their visions for the hall.

Committee member Doug Kiel, an historian and a member of the Oneida Nation of Wisconsin, said the committee decided they want a significant portion of the hall to focus on Indigenous Chicago. He thinks this section could act as a kind of gathering space for members of Chicago’s Native community.

“It would also be nice, I think, for Chicago residents and visitors to the Field Museum to have again some place that would cause them, maybe for the first time, to realize that there is another layer of Chicago’s history that they are completely unfamiliar with.”

Kiel said the committee also wants a space where Native peoples have the opportunity to represent themselves. This might be through multimedia displays and through co-curatorship opportunities.

“We need for the contemporary Native voice to come through,” said Yepa-Pappan, who is Korean and Jemez Pueblo. “We need for people to see us as human beings. To see us as living people.” 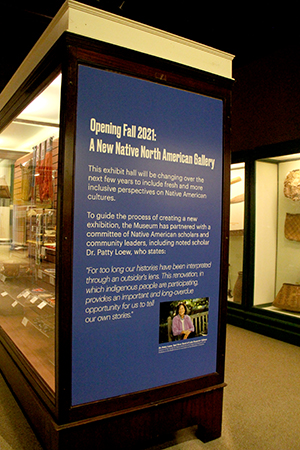 The Field Museum was founded after the World’s Columbian Exposition, which took place in 1893. Many pieces in the Native North America Hall were collected on expeditions in the late 19th and early 20th centuries. “We know that there were unethical practices that happened in the course of collecting these materials,” said curator Alaka Wali.

Kiel said he thinks one part of the solution will be developing relationships with Native communities. He hopes that extends beyond this one project.

“I think the importance of renovating the exhibit is it extends in so many ways far beyond the exhibit hall itself,” said Kiel. “What it’s about is transforming the relationship between the museum and Native people.”

In September, Field Museum staff held a town hall meeting at the American Indian Center on Chicago’s North Side. Yepa-Pappan said some of the people there had memories of when the museum’s Ancient Americas exhibit was being renovated and there wasn’t much collaboration.

“And that’s one of the reasons why we had the town hall meeting, was so that we could reassure the community that no, we’re doing it differently this time,” said Yepa-Pappan. “We are working with Native people. We want your voices. We want you involved.”

“But really to signal out to the entire museum world, here is a model for how we can engage with Indigenous experts. And I hope other museums take up that model around the world and follow it.”