Principals were told they’ll have about half as much “discretionary” money to spend the rest of this year than they had budgeted, amounting to a $46 million cut. Discretionary funds are used for things like new books, field trips, and hourly lunch and recess workers. (See data for individual schools here)

Public charter schools, which are funded through CPS, will see an equivalent cut in April that amounts to another $18 million in savings for the school district. CPS also plans to cut $5 million in professional development funds.

District officials blamed Gov. Bruce Rauner because he vetoed $215 million in pension help for the city’s schools. The state contributes about $12 million to Chicago teachers’ pensions, which is a fraction of what it puts into the retirement system for teachers in the rest of the state.

“There is still time to reverse these cuts, but clearly Governor Rauner needs to hear loud and clear about the damage that he is inflicting on Chicago students -- which is why we are encouraging every CPS parent and student to contact his office,” said CPS Chief Education Officer Janice Jackson in a statement.

At a news conference later in the day, CEO Forrest Claypool compared Rauner to President Trump.

“Just like Donald Trump, he is going to score political points with his base by attacking Chicago,” Claypool said. 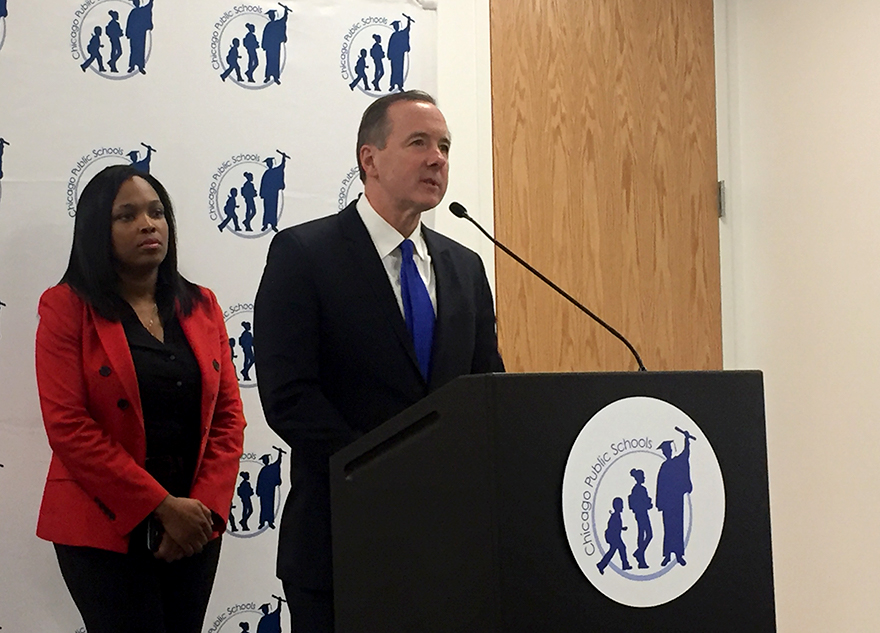 Rauner's spokesperson Eleni Demertzis dismissed the comment as a “misleading attempt to rewrite history and distract from 20 years of fiscal mismanagement by Chicago Public Schools. Governor and Mrs. Rauner have been decades-long philanthropic supporters of Chicago students and teachers, investing their time and resources into improving education outcomes.”

Rauner says he vetoed CPS' pension payment because it was contingent on state lawmakers reaching a larger deal on pension reform.

“The bipartisan agreement, worked out with Mayor Emanuel’s approval, has been clear from the beginning: Chicago Public Schools would receive assistance with pension shortfalls as part of comprehensive pension reform that saves money for the state and local governments throughout Illinois," Demertzis said in a statement. "Rather than cutting services and pointing fingers, we should all be working together to pass this comprehensive pension reform agreement immediately.”

Chicago Teachers Union president Karen Lewis called the move to freeze funds represents a “failure of leadership” at CPS and renewed the union’s recent call for Claypool to resign.

"Rahm and Rauner are both to blame," Lewis said in a statement. "There's no separation between their intention to destroy publicly funded, public education in Chicago. Since Rahm has failed at lobbying the governor for help in securing the finances of our school communities, we demand that he and the city council figure out how to save our school communities and provide revenue until our state is rid of his mentor."

Jackson said no school will see a freeze of more than 5 percent of their budget from the beginning of the school year.

Several high schools saw the steepest cuts. Lane Tech, a selective enrollment school on the North Side, will see more than $800,000 in discretionary funds frozen under this action.

To chip away further at the $215 million budget hole, CPS said it also plans to find “several million” dollars in savings through streamlining and laying off central office staff. In addition to today’s announcement, CPS last month mandated four unpaid furlough days for CPS staff to save roughly $35 million.

CPS is planning two hearings on its revised budget on Feb. 13. The exact times and locations have not been announced. CPS already amended this year's budget once to add spending called for in the new teachers’ contract.

Becky Vevea covers education for WBEZ. You can follow her at @WBEZeducation.