It was as if rush hour had come early in downtown Chicago on Friday afternoon.

Shortly after noon, word spread across the city that the racially charged trial of Chicago Police Officer Jason Van Dyke had nearly reached its end.

Fear of the public’s reaction to the jury verdict apparently prompted many people to try to hurry from downtown ahead of the verdict announcement at 1:45 p.m.

Timothy Evans, the chief judge of the Cook County Circuit Court, sent a message to all judges about 12:15 p.m. telling them to wrap up all court hearings they were presiding over “as soon as possible” and clear out of courtrooms because the verdict was “imminent.”

Evans told the judges that demonstrations could “disrupt traffic and public transportation and threaten public safety,” according to the email obtained by WBEZ.

Even the staff of Mayor Rahm Emanuel’s administration were given the option to call it a day before the verdict, as police-reform activists swiftly massed in front of City Hall.

They promised to “shut it down” if jurors cleared Van Dyke in the 2014 killing of 17-year-old Laquan McDonald.

But the jury found Van Dyke guilty of second-degree murder and other charges. And nothing resembling the worst fears ever materialized, with calm prevailing across Chicago.

In anticipation of possible unrest, the Chicago Police had put the entire force on 12-hour shifts and cancelled any planned days off.

And the Chicago Public Schools cancelled all athletic competitions on Friday evening and weekend activities – “out of an abundance of caution.”

After winding through The Loop immediately after the verdict, approximately 200 demonstrators locked arms and blocked Chicago’s Magnificent Mile during Friday evening rush hour. The peaceful demonstration had police escort while tourists stopped to take photos.

The crowd frequently chanted “guilty” as they would stop at major intersections and in front of Trump Tower along the way north of the Chicago River on Michigan Ave.

A group of young black men and women had gathered outside the criminal courthouse, at 26th Street and California Avenue, shortly before the verdict was revealed. They screamed with joy, jumped up and down and shouted “Yes!” and “Justice for Laquan!” as they listened to a live stream of the trial’s end on a cell phone.

Chantel Brooks, whose son Michael Wesley was killed by police in 2013, hugged a friend. She said she was a little disappointed that Van Dyke wasn’t found guilty of first-degree murder but said his conviction was a step toward “what we’ve been fighting for forever and needs to be an example.” 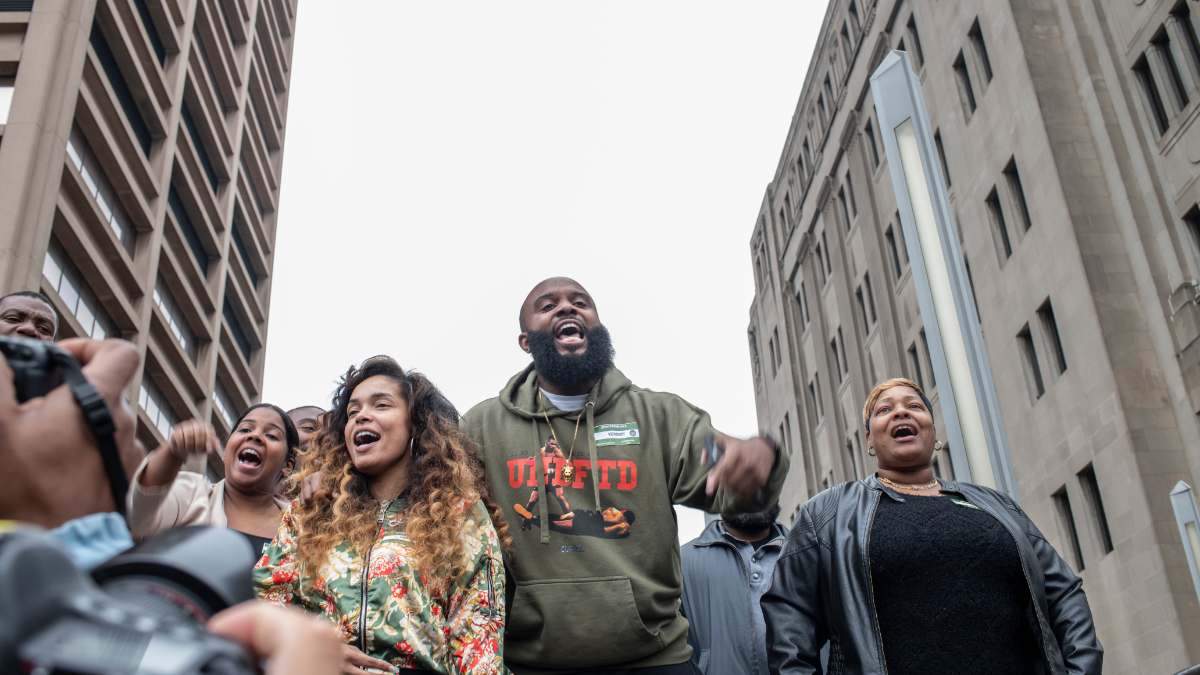 “We’re not anti-police,” she said. “All the good cops [should] get all the bad cops off the streets. That’s what we’re working toward.”

Students outside Chicago's Perspectives/IIT Math & Science Academy at 36th and Wabash heard the news of the verdict as they waited for a bus to head home.

"I’m glad they didn't just let him get away with it," said Armani Mitchell, a student at the charter school in the Bronzeville neighborhood.

At a bus stop along Roosevelt Road, Kourtney Wilson, a 32-year old public relations officer for a non-profit organization, let out a loud, celebratory whoop upon learning of the verdict.

"I am excited," said Wilson, who is African-American and was born and raised in Chicago. "I hope that this is a turn for the better.

Van Dyke was part of a system in which he did his duty, said Paris Fresh of the Let Us Breathe Collective, an arts organization in the Back of the Yards neighborhood.

"What I would like for us to do is to critique that system and critique that structure so that this does not happen again," she said. "There cannot be just us for Laquan because Laquan can't come back."

Tony Arnold contributed to this report.

Sarah Karp, Kate McGee, and Odette Yousef are reporters with WBEZ. Follow them on Twitter at @SSKedreporter, @McGeeReports, and @oyousef.