Chicago-based State Representative Ken Dunkin lost a bid to keep his legislative seat last month, but held onto something else: a pile of money.

The primary that followed drew more campaign dollars than any state-legislative race in Illinois history, and a group tied with Rauner gave Dunkin’s campaign $1.3 million.

Now, records show that Dunkin’s campaign didn't bother to spend about $1 million from those donations. That money has stayed in his campaign fund.

“People are going to speculate as to exactly what was going on,” says Redfield. “Was there an arrangement? Is this a golden parachute?”

Creative spending, after the campaign

State laws prevent Dunkin from simply pocketing the remaining funds, but his campaign can legally spend them in ways that benefit him.

Since former Senate President Emil Jones (D-Chicago) announced his retirement in 2008, his campaign committee has spent more than $1.8 million, including payments to Jones himself: $100,000 for political work and $63,000 for consulting. The former senator’s campaign fund also paid for restaurant meals, hotel stays, and about $105,000 worth of Bulls tickets.

Former Gov. Edgar’s campaign fund has spent more than $1.4 million since he left office. Much of it has been on charitable and political donations, but the spending also includes $1,970 on flowers, more than $22,000 in membership dues to various organizations, and more than $59,000 for reunions of his staff.

Dunkin gave up early—before his funders

His opponent, Juliana Stratton, spent more than a million dollars on TV ads during that final period. 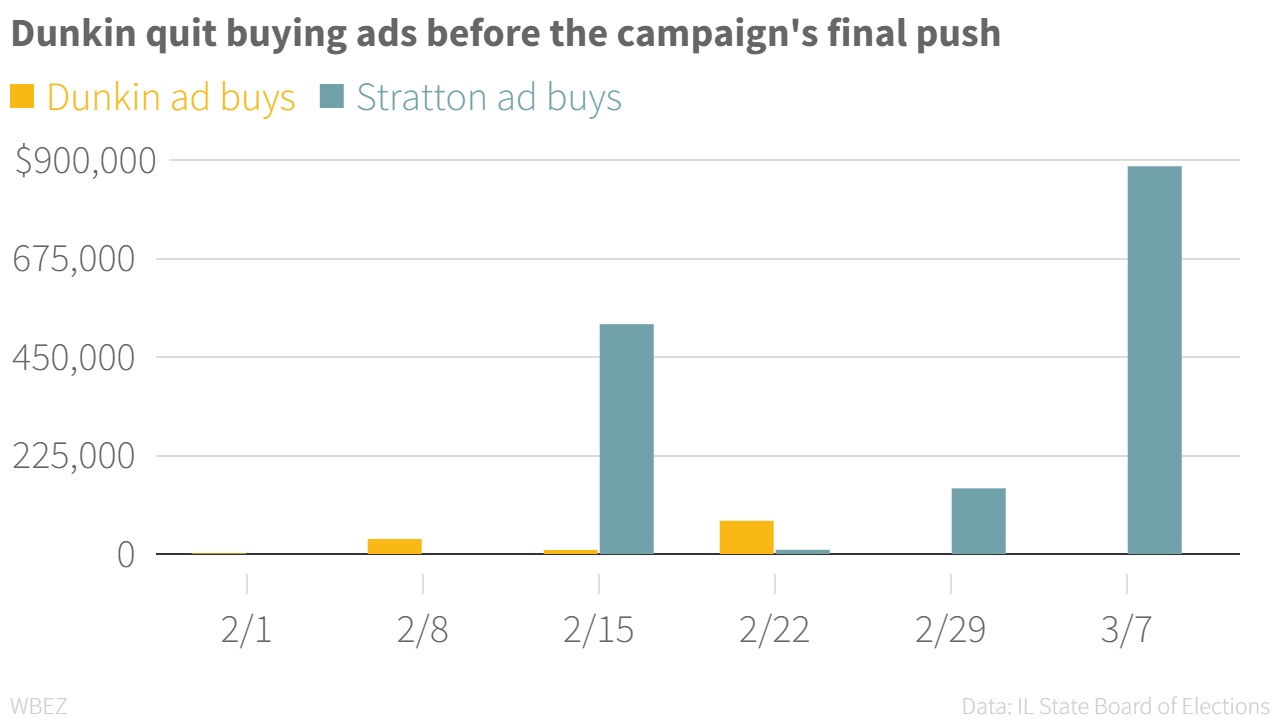 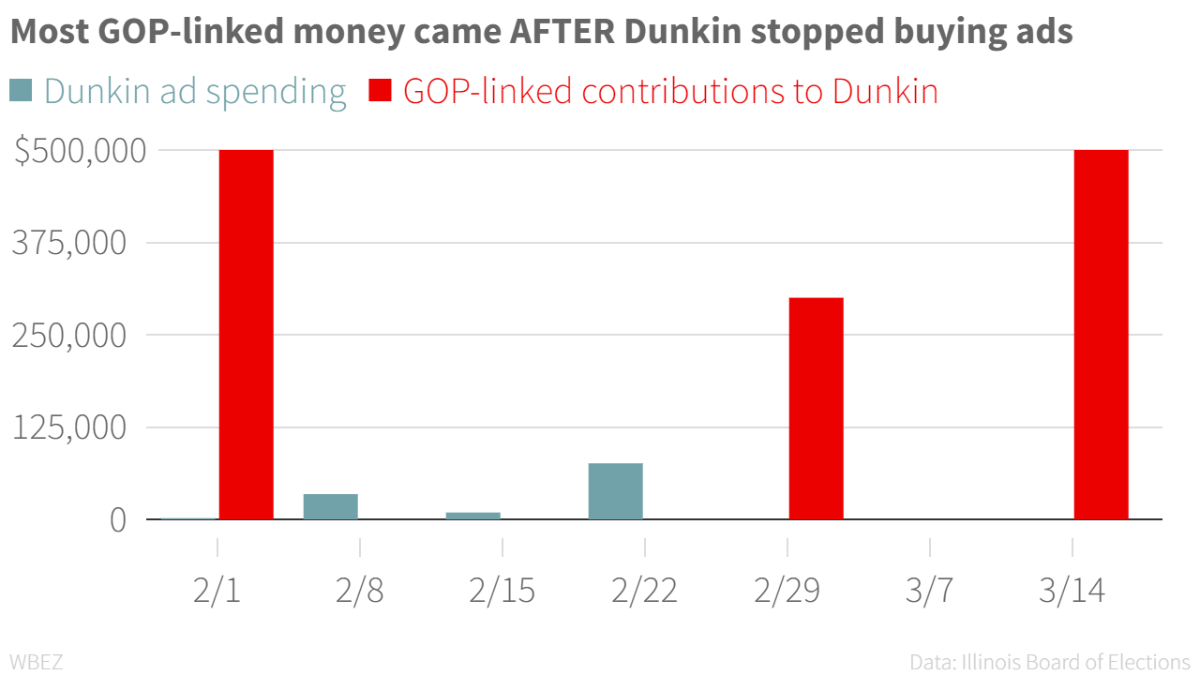 The timing looks like a red flag, according to Redfield, “The amount of money—and the fact that the last contribution came in so close to the election—is just a very, very unusual situation,” he says.

Dunkin—who did not return a phone call from WBEZ, seeking comment for this story— had two major supporters.

One was Dan Proft, a 2010 gubernatorial candidate who now hosts a morning show on a local conservative talk-radio station and runs a political fund that supports Republican candidates.

A non-profit Proft founded, the Illinois Opportunity Project, was Dunkin’s $1.3-million donor— providing more than 99 percent of Dunkin’s funding this year. (Proft declined to comment for this story.)

In February, when WBEZ asked Proft who funds the Illinois Opportunity Project , he replied: “We’re not required to disclose our donors, so I’m not going to.”

Dunkin’s other big supporter was Illinoisans for Growth and Opportunity— Illinois GO, for short—which spent more than $2.8 million on Dunkin’s primary race, much of it spent after Dunkin’s own committee had stopped buying ads.

Illinois GO is a Super PAC, or “independent expenditure committee”; Super PACs are not allowed to coordinate their efforts with campaigns.

Founded in spring 2015, Illinois GO collected $9 million in its first weeks of existence— from a total of five donors . The group’s director, Greg Goldner, has described its donors as “lifelong democrats,” but some have clear links to Gov. Rauner, and the group shares Rauner’s antipathy to public-sector unions.

Illinois GO also has a dark-money arm, which Goldner told WBEZ has raised $6.5 million of its own.

Between dark money and regular political donations, groups aligned with Rauner’s agenda have put together more than $46 million. The donors—those that have been disclosed—are from just nine households.

Dunkin’s opponent, Juliana Stratton, received about $1.9 million for her campaign—less than half the total of Dunkin’s support. About 60 percent of her support came from labor unions and related groups. Most of the rest came from other Democratic political committees. (A breakdown from March 14 can be found in this WBEZ story.)

In addition to the record-breaking campaign spending—which led many to label the primary contest a “proxy war” between Gov. Rauner and Democratic House Speaker Michael Madigan—the Dunkin-Stratton race made news when Stratton picked up a high-profile endorsement in early March, from President Barack Obama.

Stratton beat Dunkin by more than two-to-one in the March 15 primary, with 68 percent of the vote.