The Chi is six episodes in, and characters are still trying to figure out who they should and should not trust.

The youngest main characters — Kevin, Jake, and Papa — have shown a keen ability to determine who is and is not in their corner. But they aren’t in this week’s episode, and their presence is definitely missed after they lit up the screen with joyful scenes for the past two episodes.

Where are Kevin and his friends this episode? It’s not Spring Break yet 😂😂😂😂 #TheChi @SHOTheChi #Episode6 #PenetrateAFraud

Their older counterparts kept moving the plot forward this week as they struggled with issues of trust in their various relationships.

Trust on the street

The new drug leaders don’t trust the old ones — and they shouldn’t. Quentin, the elder kingpin, has returned from Cuba and re-assembled his crew. They’re out to take back whatever they want. Quentin doesn’t respect the new leaders or how they do business. He thinks they have no strategy and don’t follow the old rules of the street.

It’s often reported that Chicago gangs are now less organized without the kind of traditional leaders of Quentin’s time. And if the OG has anything to do with it, the new crew won’t be in business much longer.

It’s so dope how they show how much the streets and the drug game has changed since Q was running things. Especially when he said ‘athletes used to get a pass’ this show is so DOPE #TheChi

Trust with the police

Unlike in the past, Ronnie begins to place his trust in Detective Cruz. After searching and searching for a key to solving his stepson’s murder, he gives that information over to Cruz to help him solve the case. Giving information to the police not always a popular move, but officials like Chicago Police Superintendent Eddie Johnson have said it’s important to build that trust “because the police simply cannot do this alone.”

Brandon’s mother has a bad history with men. Past relationships left her hurt and in bad shape, so he’s reluctant to trust her newest choice in a partner. But in a surprising turn, he decides to trust her — and her judgment — and stands behind her decision to be with him.

Emmett doesn’t do a thorough check before making a big purchase that he hoped would jumpstart a new business venture. It’s an honest mistake, but one that leaves him and his partner in significant debt — and in dangerous and compromising positions.

Here's a look at what else went down in episode 6.

Ronnie needs to lay his burdens down

We get another glimpse of executive producer Common (who plays Rafiq) when a drunk Ronnie walks past the mosque that he stumbled on the night he was shot. He tells Rafiq that he’s looking for a gold chain. It belonged to Jason, and he’d lost it that night.

Trying to convince Ronnie to talk to him, Rafiq says that he spent 12 years in Statesville prison before he found his way to Allah. Rafiq says his doors are always open if Ronnie wants to talk about his problems. Ronnie declines the invitation, even though he’s still mentally and physically hurting and could really use some guidance. 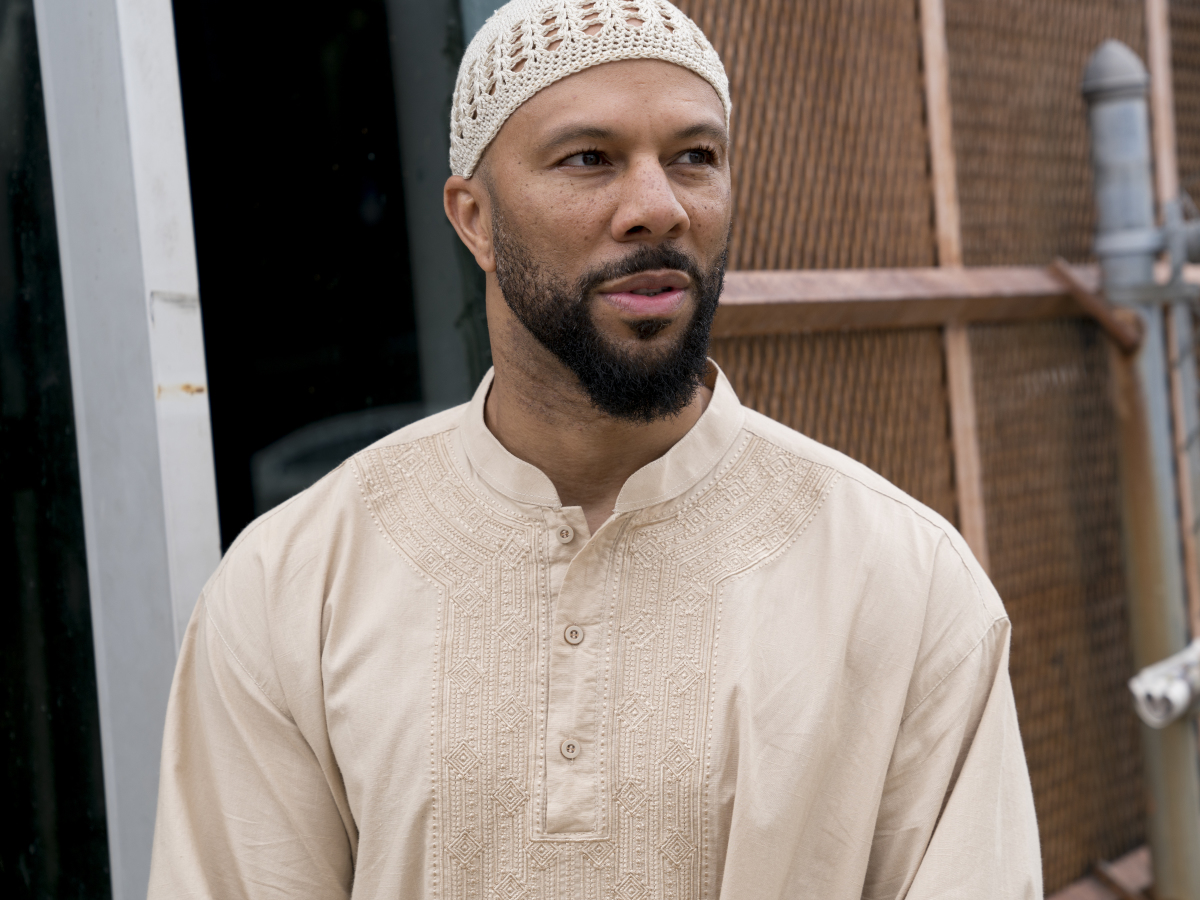 Ronnie, walking around and still trying to get into Jason’s phone, does get a break when a kid who played basketball with Jason tells him about Jason’s girlfriend, Shante. Ronnie pays Shante a visit and finds out that she’s pregnant with Jason’s child and that Jason’s mother, Tracy, knew about the baby but didn’t want Jason to be in the child’s life. 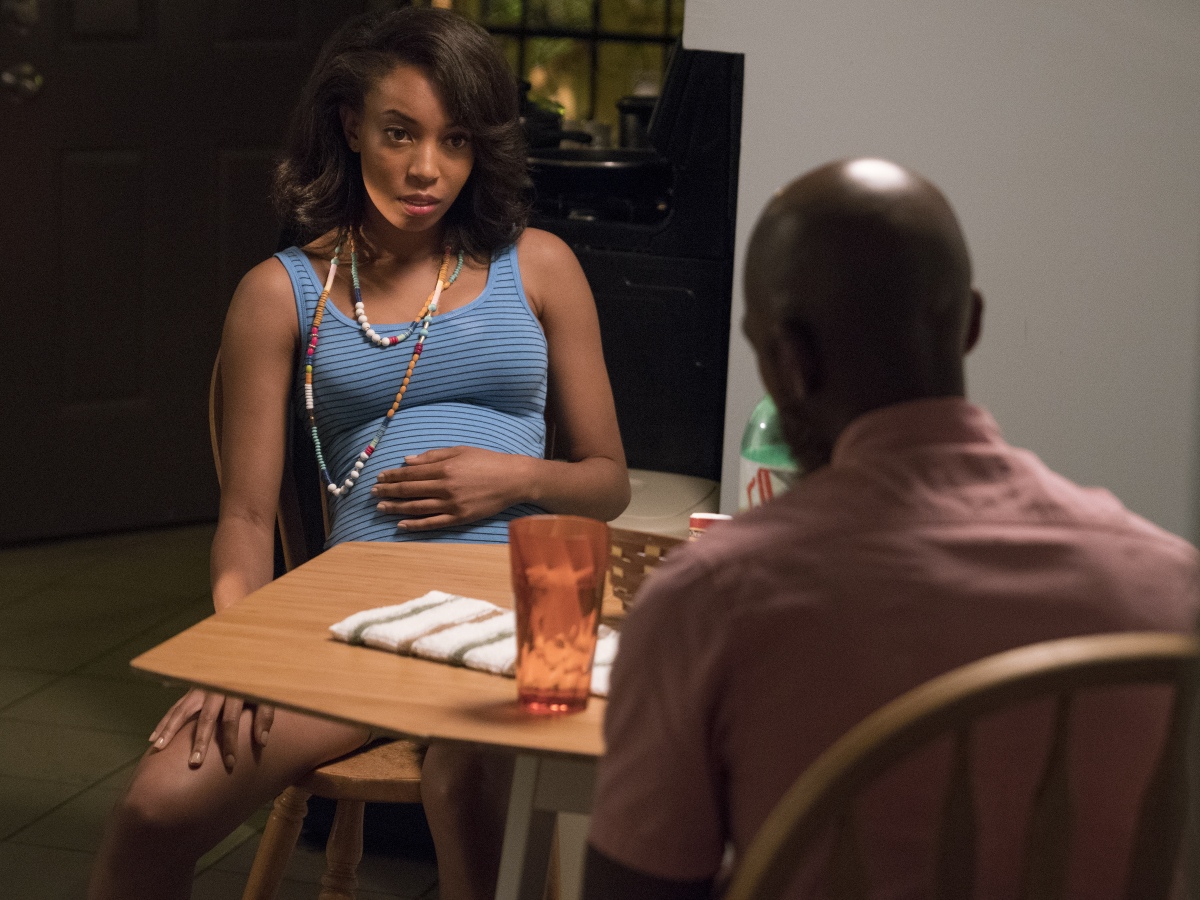 Shante gives Ronnie the passcode to unlock Jason’s phone, and Ronnie eventually gives that information to Detective Cruz. Cruz discovers that Jason’s last call on the night he was murdered was to 911. This is the first break in the case of the murder that set all the conflict in the series in motion.

Emmett is an accidental fraud

Amir and Emmett start their sneaker business. The plan is to earn enough money to make both of their lives easier by buying hard-to-get shoes and selling them for double or triple what they paid. A woman sells them her husband’s entire rare shoe collection because he cheated on her with her sister after 15 years of marriage. Emmett tells her that he doesn’t deserve her or those sneakers, and she only charges them $5,000. 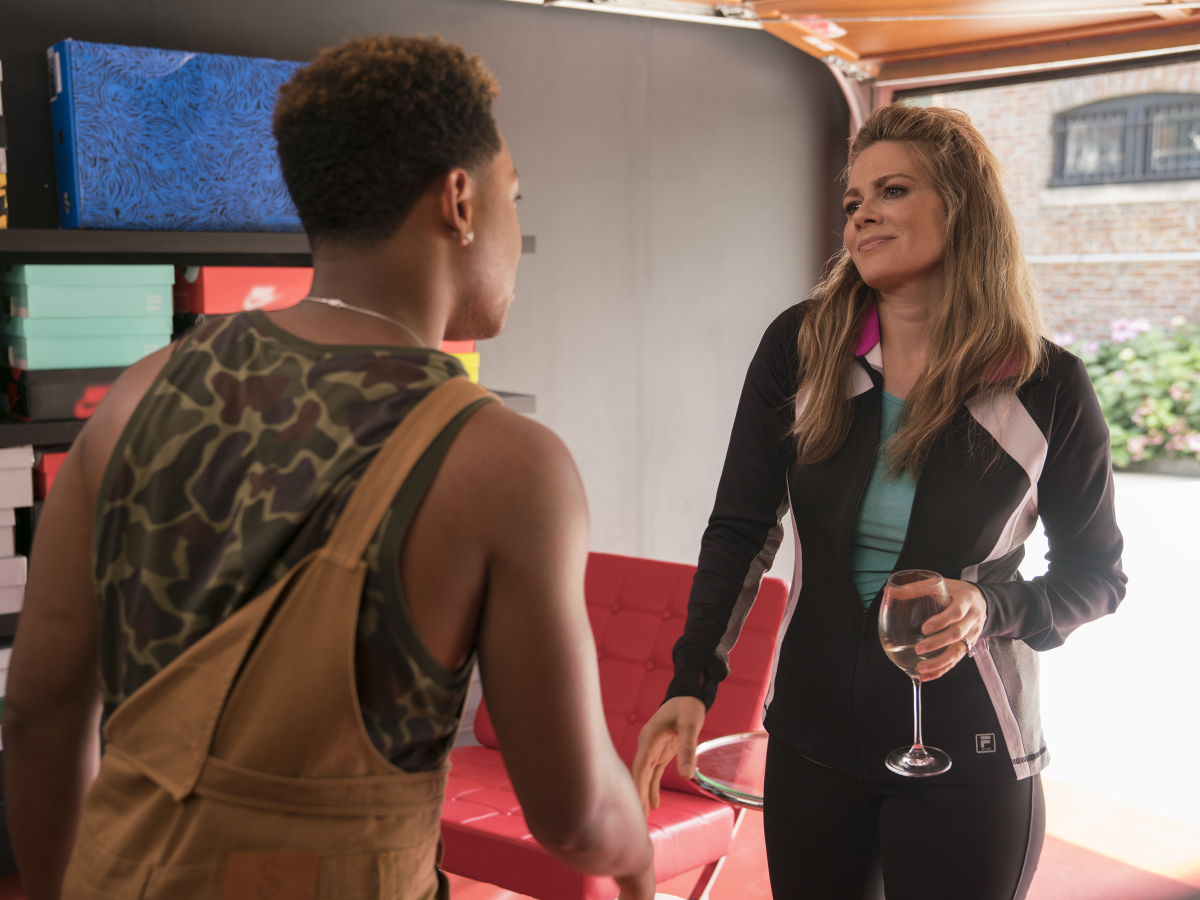 But Emmett’s plan doesn’t go the way he planned. He’s selling sneakers while taking care of his baby, making sale after sale, when a customer notices that two pairs of shoes have the same SKU number, which means they’re knockoffs. He accuses Emmett of trying to con him and pulls a gun out on Emmett, even though he’s holding the baby. He also robs Emmett of the money he’d made already.

Emmett tells Amir about the incident, who admits that it wasn’t even his $5,000 that he used to buy the shoes. He’d taken it from his uncle without his knowledge. They were both just trying to make more money for their families, and they now have a real problem on their hands.

The new gang leaders confront Quentin as he sits on his porch. Trice, who is the senior member of the organization, questions Quentin about why he’s back from Cuba and tells him that he can’t just come back and try to take over. Quentin, who seems unmoved by the younger gangsters in front of him, gives a bunch of ambiguous answers to their questions. 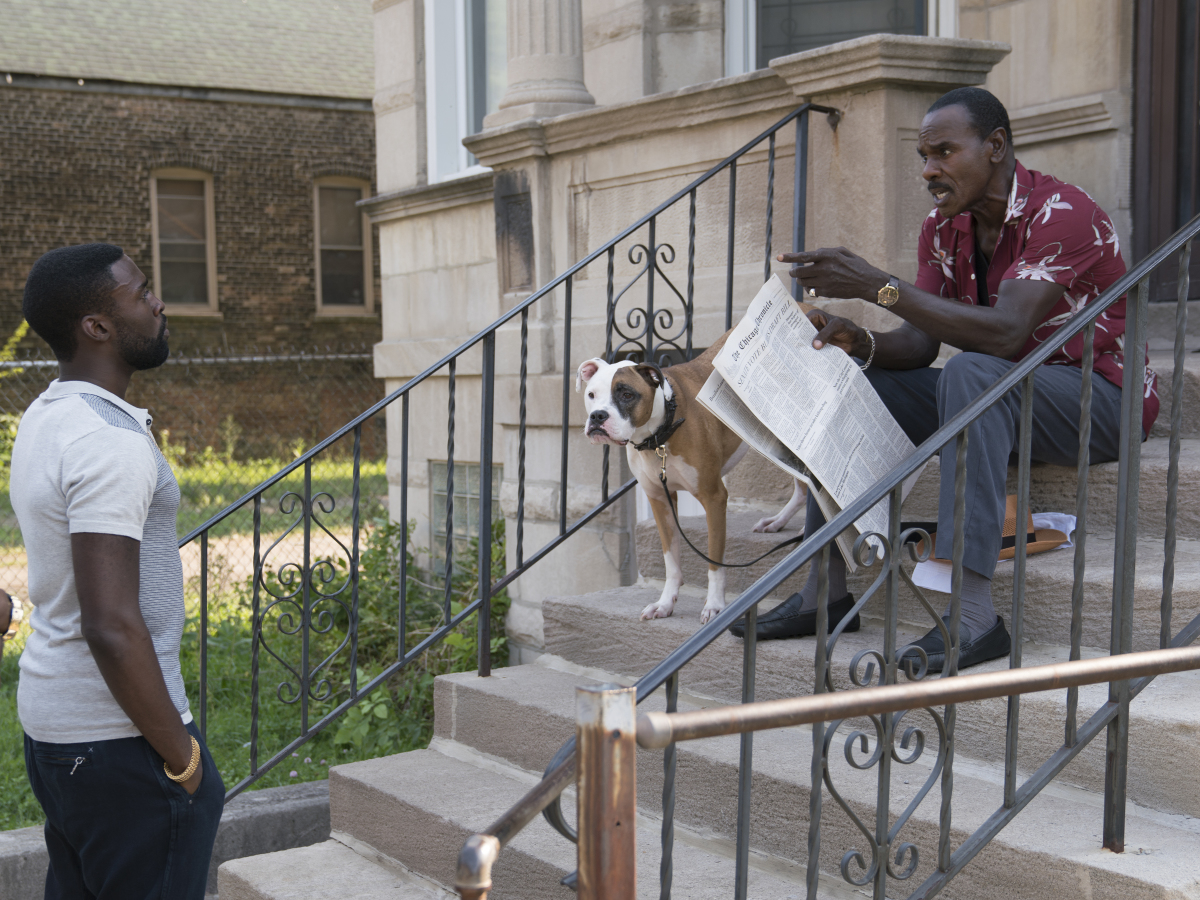 He also says that Trice never got back to him about finding out who killed Jason and, in the most old man gangster way, tells them to get off his lawn.

Cuba has to be Jason’s real dad. Why else he so invested #thechi

But it was all a very smart distraction. While the younger leaders were focused on Quentin, Quentin's old crew, Tep and JB, were looking around in the gang’s stash house and found the government-issued guns they stole from the rail yard. Quentin puts two and two together, and he figures out that the information must have come from the white man he saw Trice with when he first came back. (That’s the dirty cop who is Detective Cruz’s work enemy.)

Quentin instructs his crew to get him those guns. During the night, they sneak into the stash house, kill everyone inside, and steal them. Quentin oversees the operation as the memorial mural of Jason peers from behind him from across the alley.

So the OG’s are killers for real. I didn’t doubt their skills but... #TheChi

Brandon cooks himself some trouble

Brandon’s mom, Laverne, is planning a romantic cruise with her boyfriend, Greavy. Turns out, the two have actually eloped and they’re actually planning is their honeymoon. But first, the two are having a cookout to celebrate one last time in Laverne’s home before she sells it.

Brandon is visibly angry and says he’s not coming because he has to work. Greavy begs Brandon to come, saying it would mean a lot to Laverne. He promises Brandon that it’ll be a good time and tries to convince him to cook food for guests, hang out, and drink Heinekens with him. Brandon, still upset, says he won’t be there.

When Brandon goes to work, he and Sarah continue to flirt with each other. Sarah, who runs the restaurant with her husband, has been giving Brandon compliments all season. She asks if he’s still fighting with his girlfriend and changes her shirt in an adjacent room that’s still in Brandon’s view. 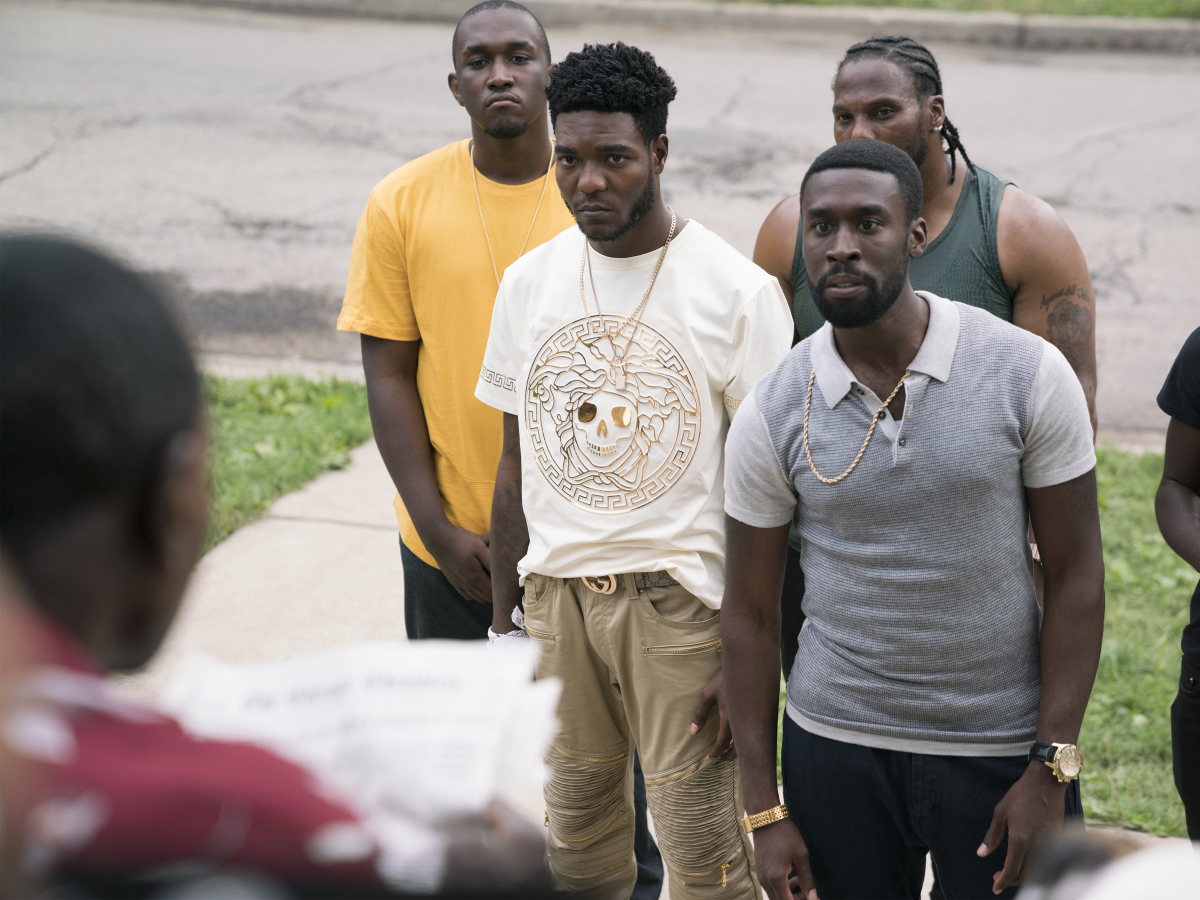 Brandon watches her change and tries to apologize, but the weird scene is interrupted by a coworker. Chef (Sarah’s husband) has summoned Brandon because Sarah put Brandon’s ribeye caps on the menu for a big party. This is the biggest opportunity he’s gotten so far, and he jumps at the chance to serve his dish to 120 guests.

The party goes well, and after it’s over, Brandon and Sarah take the leftovers to Laverne and Greavy’s party. Laverne, who had locked herself in her room, is overjoyed that her son has made it. Greavy, who’d been protecting a cooler of Heinekens all night, was relieved that Brandon made it and that his bride is happy. Everyone is nice to Sarah, and the party goes on.

At the end of the night, though, Brandon and Sarah kiss outside of his mother’s house.

Brandon was already on a dangerous edge, but kissing his boss’ wife took things too far. For someone who is really focused on career advancement, he’s put himself in a very bad position to stay at that restaurant.

Arionne Nettles is a digital producer at WBEZ. To share your comments and thoughts on The Chi, tweet her at @arionnenettles.