Former Chicago Police Board President Lori Lightfoot and Democratic Cook County Board President Toni Preckwinkle are headed to a runoff election for mayor after topping a 14-candidate field on Tuesday.

By advancing to the runoff, Lightfoot and Preckwinkle assure Chicago will have its first African-American female mayor in city history after the April 2 mayoral runoff.

With 97 percent of precincts counting, Lightfoot had 17.5 percent of the vote compared to 16 percent for Preckwinkle. Former White House Chief of Staff William Daley was in third with nearly 15 percent, and he conceded defeat at about 9:40 p.m.

Lightfoot, who is openly gay and courted progressive voters, was jubilant in claiming a surprise first-place finish.

“So what do you think of us now?” Lightfoot yelled to a joyous room of cheering supporters jammed into a female-focused co-working space in River North, where her election night party was held.

“We’ve been saying in the last couple days this is going to be a race that comes down to the inches, and you’ve been incredible,” she said to her supporters shortly after 9 p.m.

Preckwinkle emerged before her supporters shortly after 10 p.m. and wasted no time in coming out swinging at Lightfoot.

“My entire career has prepared me for this moment,” she told cheering supporters at her election party in Hyde Park. “While my opponent was taking multiple appointments in both the Daley and Emanuel administrations, I fought the power elites who’ve been trying to hold this city back for decades.”

The reference was to Mayor Rahm Emanuel’s appointment of Lightfoot to the city police board and Daley turning to her to reform a minority business enterprise program during his tenure as mayor.

Preckwinkle scored backing from the Chicago Teachers Union and SEIU Local 1, which meant her campaign had the benefit of a significant number of unionized campaign workers and the organizations’ financial backing -- advantages her supporters thought would translate to a first-place finish in a record-low-turnout election.

Daley, the brother of former Chicago Mayor Richard M. Daley and son of longtime Mayor Richard J. Daley, threw in the towel and vowed not to challenge Lightfoot and Preckwinkle’s likely victories. It was the first time a Daley had lost a citywide election in Chicago since 1983.

“I’m here tonight with an outcome none of us had wanted,” Daley told supporters. “But because we respect the Democratic process, we all must accept it, and we all will move on.” 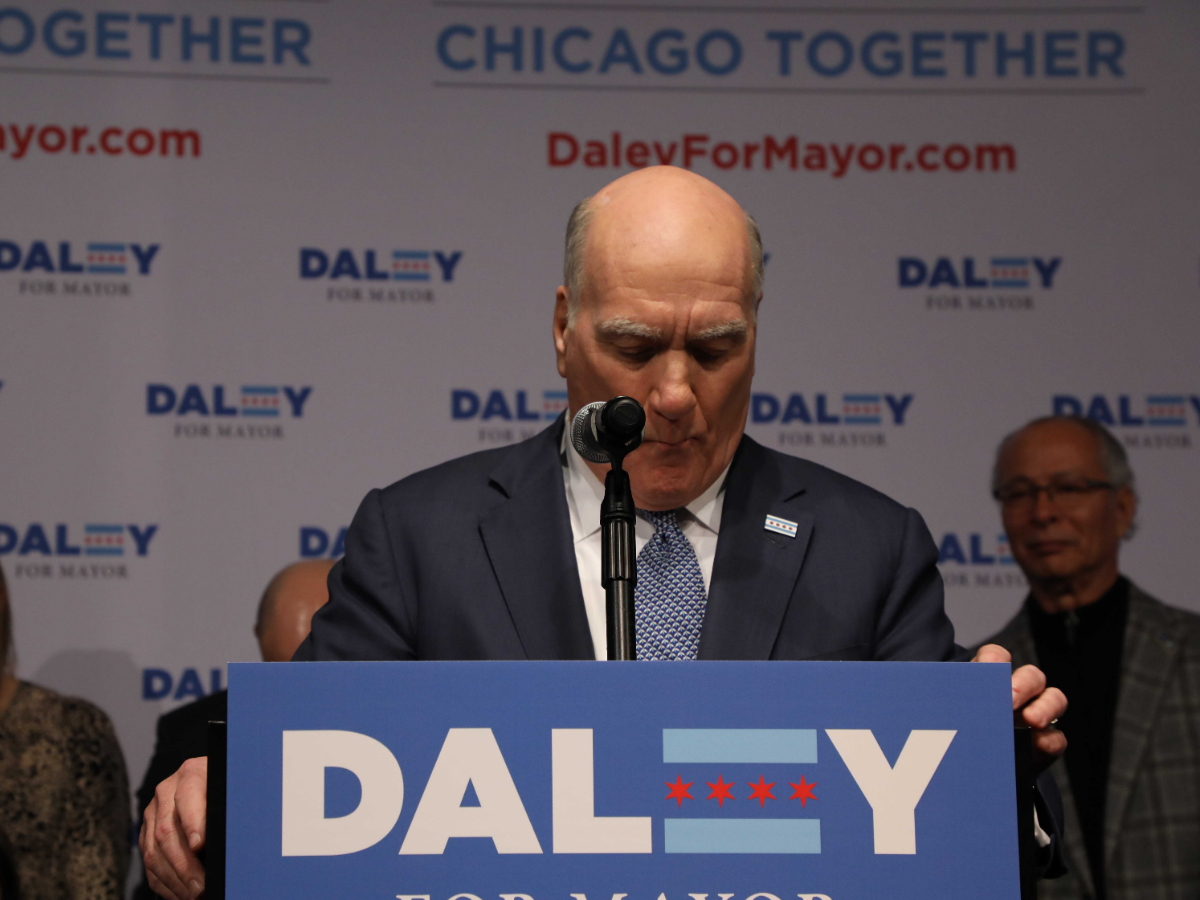 Other candidates who had circulated among the frontrunners earlier in the campaign fared worse. Businessman Willie Wilson got about 11 percent of the vote, Democratic Illinois Comptroller Susana Mendoza got 9 percent, activist Amara Enyia got nearly 8 percent, and former city school board president Gery Chico got just 6 percent.

The surprising retirement announcement of Emanuel – who did not support anybody in Tuesday’s election – set off a campaign with no clear frontrunner among them.

It was a colorfully chaotic and uniquely democratic spectacle in a city that’s known almost nothing but machine politics and strongmen mayors for the past century.

Emanuel had said he would run for a third term and raised millions of dollars toward that end. But even when he still appeared to be in the race, a few candidates lined up to challenge him.

Emanuel’s critics hoped to capitalize on the mayor’s diminished popularity after the 2015 release of a video showing the police shooting of 17-year-old Laquan McDonald. But it wasn’t until Emanuel dropped out that the most formidable candidates, including Preckwinkle and Daley, entered the race.

Yet, in polls taken ahead of the election, undecided voters appeared to outnumber the supporters of any single candidate. There was no candidate with even 20 percent of the vote in the polls, and there were five or six contenders bunched with the polls’ margins of error.

Making the election even more unpredictable was the emergence right in the middle of the campaign of a big City Hall corruption scandal.

The corruption case unveiled against the most powerful City Council member, Ald. Ed Burke, 14th Ward, did damage to several of the most potentially competitive candidates in the mayoral race.

Burke had endorsed Chico, his one-time aide, but Chico said he would no longer accept that support after Burke was charged by federal prosecutors with attempted extortion.

Burke also had been a longtime mentor and personal friend to Mendoza. Mendoza’s campaign fund took a further hit when news broke that another mentor, Ald. Danny Solis, 25th Ward, was cooperating with investigators who were probing Burke. Mendoza had to give away more than $140,000 in campaign funds from Solis and from companies with ties to a Solis confidante.

But the candidate who suffered the most by association with Burke likely was Preckwinkle. The feds say Burke muscled a campaign contribution for Preckwinkle from the same businessman he had extorted.

Preckwinkle said she did not accept the contribution and she also returned $116,000 from a fundraiser held for her at the Burkes’ home.

Preckwinkle had hoped to cruise to a first-round, outright win by capitalizing on the same sort of multiracial, progressive coalition that vaulted her into the Cook County Board president’s job eight years ago. But Preckwinkle, who is the leader of the Cook County Democratic Party, fought suggestions that she has become more of a political insider and boss than an independent, progressive insurgent.

Preckwinkle’s campaign also may have suffered from the repeal of the county’s unpopular tax on pop and other sweetened beverages — a tax she pushed for. And she may have lost some voters to other African-American candidates, including Lightfoot, Wilson and Enyia, who was backed by musicians Chance the Rapper and Kanye West.

The mayor’s race marked the first time that William Daley has carried out on his long-threatened intent to run for office.

A few years after dropping out of a run for Illinois governor, Daley at last took the plunge and mounted a campaign for the job that was held for decades by his family.

Daley had spent most of his career in corporate America and federal government, as an aide to two Democratic presidents, Bill Clinton and Barack Obama.

But his run for mayor – and especially his suggestion that changes be made to the public-employee pension law – generated deep concern among labor unions. Rivals said he would continue the legacy of his father and brother, who left the city with deep financial problems. And critics also allege he would be the candidate of big business.

Daley raised nearly $9 million, far more than any of the other 13 candidates. That included $2 million from the richest man in the state, Ken Griffin, who was a big supporter of former Republican Gov. Bruce Rauner.

Mendoza’s campaign enjoyed the support of some trade unions but she was hampered by the fact that she could not openly announce her bid for mayor until after she was re-elected as comptroller in November. It was the worst kept secret in local politics, and a recording of a commercial she recorded, expressing her barely concealed mayoral ambitions, leaked shortly before she won the November general election.

Chico was running for mayor for the second time, having lost to Emanuel in the 2011 election to succeed Richard M. Daley.

Vallas, who got five percent of the vote, was the first Chicago schools chief executive after Daley took control of the system in the 1990s and he also lost a close election in 2002 for the Democratic gubernatorial nomination. But his name recognition had appeared to ebb in the many years since that campaign, as he left town to work as a school administrator in Philadelphia, New Orleans and Connecticut.

Other candidates included former Emanuel top cop Garry McCarthy, who turned on the mayor after he was fired by him and ended up with less than three percent of the vote. Jerry Joyce, a son of longtime Southwest Side power broker Jeremiah Joyce, got seven percent.

Whoever wins the runoff will inherit a long litany of difficult problems.

Emanuel enacted tax hikes and made many unpopular spending cuts. But the city and Chicago Public Schools, which are controlled by the mayor, continue to face enormous financial pressures. The biggest of those concerns are billions of dollars in unfunded pension liabilities.

The new mayor also will inherit a Chicago struggling with divisions between the largest branch of city government – the police department – and many of the people that the cops are supposed to serve and protect.

The police union has turned far to the right in recent years, in a city where there is strong pressure to push the Democratic establishment further to the left and loud calls for police accountability.

And the city has grown increasingly separated into the rich and poor under Emanuel and Daley. What was once largely a city of middle-class neighborhoods now sees more and more wealthy, mostly white areas and vast swaths of poverty-stricken, economically depressed sections.