Last year, a woman was shot and killed on 75th and Stewart in Englewood. Most people have that moment when enough is enough. This was Tamar Manasseh’s.

Manasseh lives in Bronzeville, but she grew up in Englewood. Right after the murder, she decided to organize Mothers Against Senseless Killings, or M.A.S.K.

It’s a mom patrol that camps out on the block of 75th and Stewart every summer afternoon into evening as a form of violence resistance. The moms wear hot pink shirts and black hats. R&B and hip hop music blast from speakers.

I visited the moms on a recent afternoon. There's a barbecue grill going and bottled water off to the side. Lawn chairs set up. A CTA bus whizzes by on 75th Street.

Around 5 p.m., it’s a peaceful summer scene in sweltering hot weather. The sun is far from setting.

This is Manasseh’s second summer on the block. She said coming out here daily restores her faith in a city that seems besieged by violence.

Manasseh said you can measure the success: first, by the crowds, which vary day to day but can number in the dozens. But there’s something else, too.

According to police statistics, this summer the block hasn’t seen one shooting, although crime still happens in the area. Manasseh said she has no plans to stop coming out. 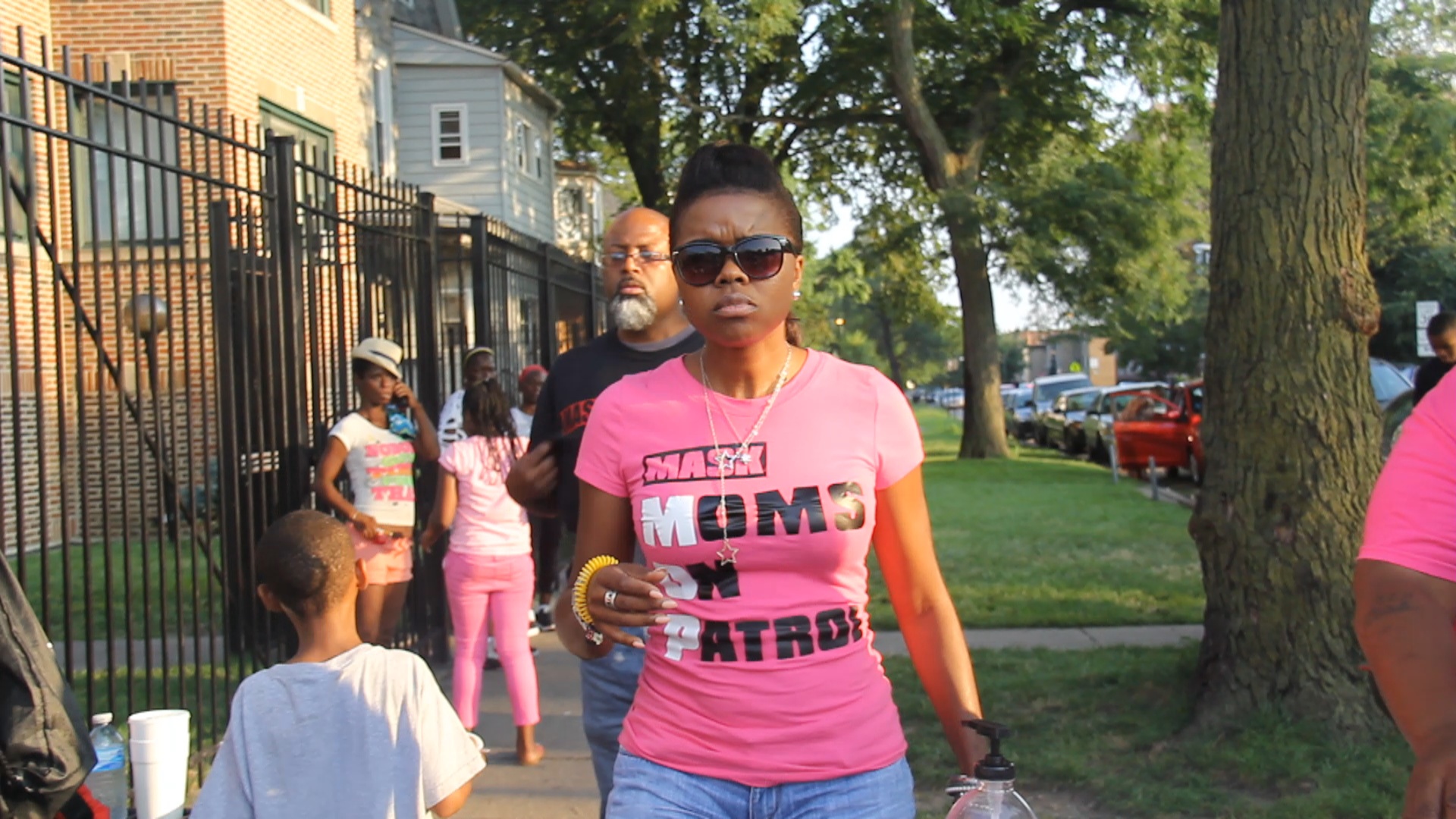 The gathering is mostly children. They frolic outside and get a free dinner. This night it’s chicken, potatoes and broccoli wrapped in aluminum foil taken off the grill. There’s a side salad, too, that some of the kids turn their nose up at.

This and accusations of cheating at the beanbag toss game are the biggest sources of drama.

At least until recently.

Manasseh and the other mothers station themselves each day in the same spot in front of a large courtyard building.

Some of the children play in the courtyard as the moms set up on the sidewalk.

Recently, the owner, who doesn’t live in the building, told police he wants everything and everyone to move.

Perry Management Corporation owns and manages the property. A representative of Perry Management told me they got reports that a cab driver and cable technician refused to come into the building because of the crowd.

I had to push back and say that’s just individuals’ own stereotyping. The gathering is lively but not negative.

But the representative said she wouldn’t want that type of gathering in front of her house.

Manasseh was called to the local police district, where she said she was told the moms had to leave that spot, but that they could move to the vacant lot across the street.

“It’s about the quality of the lives of the people in the community. Perry Management clearly doesn’t care about that,” Manasseh said. “But there are lot of people who come into areas like this, they buy property dirt cheap and they really do exploit the residents in these areas because they feel these people can’t do any better. They aren’t going to say anything. They’re not going to complain. So they can get away with whatever they want to do. They can do whatever.”

So Chicago police brokered a compromise: they said the moms could finish out this summer season on the sidewalk, but next year they would have to move their summer festivities across the street, to a lot which they could purchase.

Manasseh said she had to promise the city, police department and the building owners she would never ever set up again in front of the 75th and Stewart courtyard building.

Natalie Moore is WBEZ’s South Side reporter. Follow her on @natalieymoore.