From his snowball stand in North Lawndale, Kentheney Moore is selling the very essence of summer.

Moore is scooping ice from his cooler into four sizes of Styrofoam cups — the cheapest is a quarter, the most expensive is $2.

“I want birthday cake,” hollers one little kid, ordering up this year’s newest snow cone flavor. “Birthday cake and coconut!” yells another. Moore pumps pink syrup onto the ice, adds a straw, and the slurps begin.

“Just about every block got a candy store,” says Moore, 39, who says he’s out here hawking snow cones whenever he’s not at his other work. “They all got different stuff. …My little brother got one down the street, it’s one on my block. It’s one down there.”

Moore’s stand consists of one table and a tent set out on the vacant lot next to his childhood home.

And for those who come hungry, Moore can fix up nachos, tacos or loaded baked potatoes. He makes change out of a designer fanny pack he slings across his chest. His ultimate business goal: a food truck.

Moore is one of hundreds of Chicago snow cone vendors who hustle through the heat to make little kids smile big — and to make that money, a quarter at a time.

Snow cone stands and summer “candy stores” go back decades on Chicago’s West Side. Microentrepreneurs’ stands sprout up to form an entire summertime economy across communities where jobs are hard to come by. The 24th Ward, where Moore’s stand is located, is 47th out of 50 in terms of the number of active business licenses.

“This is a whole economy”

Moore’s stand started some 15 years ago — in the house. There’s a long tradition here, and in the African American community more broadly — of selling a little something from a front window or a back door.

Moore’s mother took over the entire front part of the living room for her candy store. That was back in the early 2000s. “The whole wall from the door all the way to the bathroom was full of candy and chips,” says Moore. Later, his dad moved the stand outside and added snowballs. Since then, just about everyone in the family has run the stand at one point or another, Moore says.

Stands in the neighborhood get elaborate, and people get creative. A few years ago, a neighbor set up a well-stocked candy stand with a specialty offering: Kool-Aid pickles — cold, sour pickles marinated in blue or red Kool-Aid. The candy stand attracted so much business, Moore says the nearby corner store extended hours to midnight to make up for their losses.

Johnson typically helps more formal businesses launch and grow, but he definitely knows about snowball stands and candy stores. Johnson says his aunt ran a candy store out of her Altgeld Gardens apartment decades ago. “I remember always asking for some of her supply,” he says, laughing. “It was a way to supplement income.” 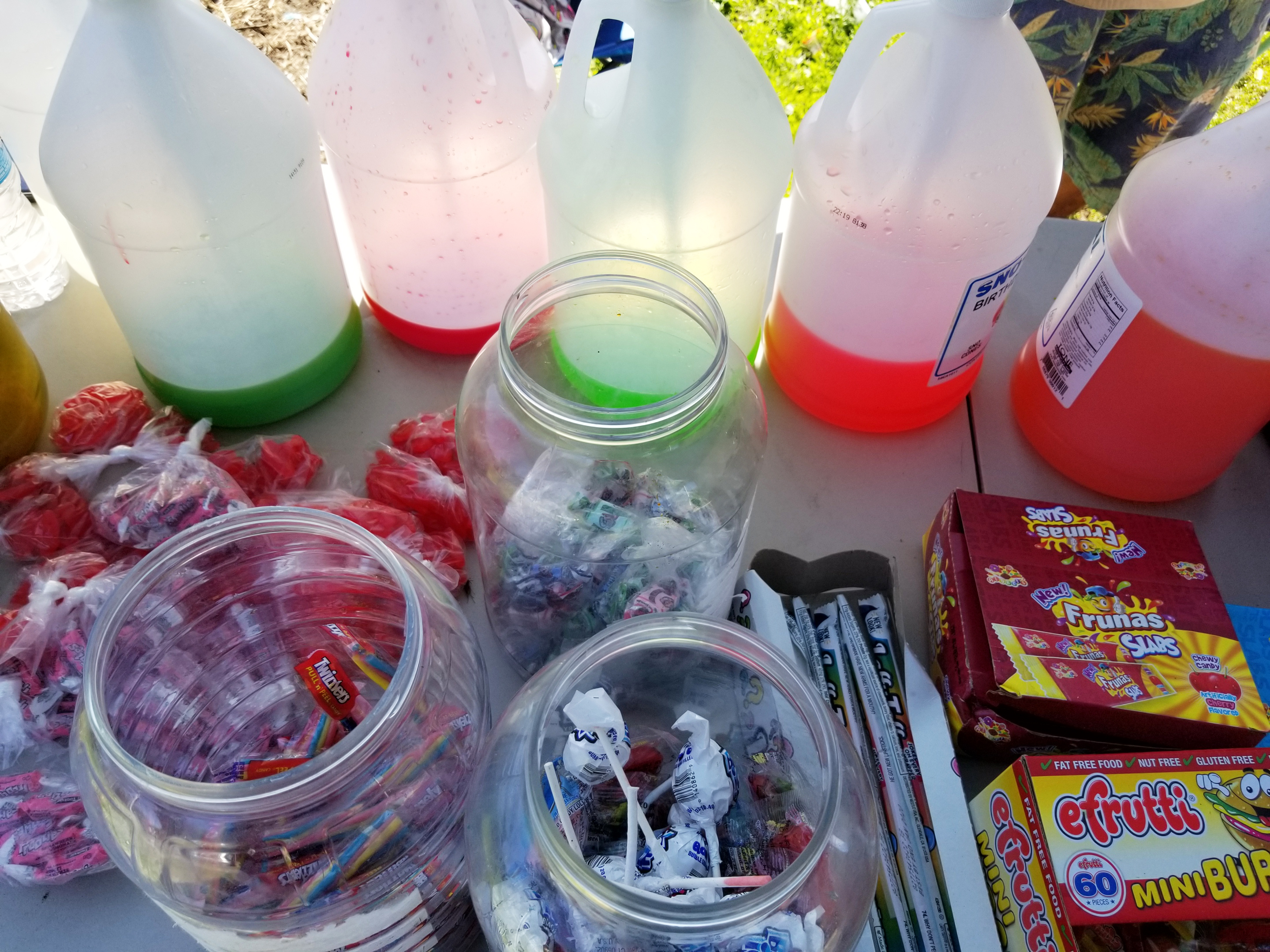 Harris estimates 35% of his summer business is snow cone-related. Gallon jugs of colorful snowball syrup are lined up along his loading dock. And West Side snow cone vendors show up seven days a week to get their main ingredient: snow ice. “That’s the fine stuff,” says Harris. “It’s just like snow.”

Harris built a machine that pulverizes ice cubes into feathery particles. Snow ice looks white in the bag, not transparent. And folks who line up for the ice are very particular about it.

cdn.wbez.org/image/b4727abaeb399fd27b8c95e7454acef2" title="ms tandy stand" data-source="WBEZ" data-byline="Linda Lutton" data-caption="Tandy Edwards (not pictured here) started her snow cone stand to give neighborhood children somewhere to go, and to give her 11-year-old son (under the stand) a way to make money." style="width: 100%;">

Her handmade signs, and the stand itself, is Edwards’ statement to her neighbors, to her city. It’s her small part. She’s giving kids a place to go in the community (the only nearby store is across the expressway and sells liquor). And she’s giving her youngest son, who’s 11, something to do this summer, in a community with too few jobs, too few businesses.

“I want my son to be able to know there’s ways to get money other than the ways that they see on a regular basis,” Edwards says. “Anything to support our neighborhood. ... I have a lot of support. People on this block, that block. They come. The bus driver, the police actually stopped in. They didn’t even want anything. They just wanted to support the kids, so I believe that ‘kids’ is a big idea for our stand.”

“I really don’t want to work for anybody else”

Taken together, these microentrepreneurs represent a huge local, black-owned effort. Snowball stands and candy stores are part of an economy that’s based on ingenuity and hustle, but is largely invisible to the broader society.

Jaheim Johnson has a snowball stand worthy of notice. He sells nearly every snow cone flavor they make. He has red raspberry and blue raspberry, for instance. Orange, peach and fuzzy navel. He’s lined them all up for effect, across not one but two tables.

“If I don’t have something that the people want, they’ll go somewhere else and get it. And I kinda want all the business,” Jaheim says, laughing. “Not to sound greedy or nothing!”

This is Jaheim’s third summer running the stand. He started out further west, then moved here, to his great-grandmother’s house on Central Park near Douglas Boulevard, thinking it was a better location. He was right.

And while he sounds like he’s ready to enroll in business school, Jaheim is just 14. He just graduated from grammar school.