﻿When I turned 12 years old, my parents told me that I couldn’t hang with some of my best friends from school anymore. Wait, hold up, what?

“Your life is going in a different way than theirs,” my mother summarized. “Maybe they can come over here sometimes, but you can’t go anywhere with them and you definitely can’t go to their homes anymore.”

I dramatically stomped away, angry and hurt. What I wasn’t mature enough to understand at that time was something that Kevin and Papa on The Chi seem to be learning: that if you don’t want to hinder your own growth, you might have to let some friends go.

It only takes an instance for a good kid like Jake to end up on a different track. For him, taking a gun from his brother, Reg, without him knowing changed his entire trajectory. Like the 13 percent of male students and 8 percent of female students who say they were in a gang at some point between sixth and 10th grades, Jake is now beholden to a life he doesn’t have much say in.

But he’s also making his own everyday decisions, like fighting and not going to school, albeit with some negative influences from Reg. His mentality is much different from the Jake we first met in episode 1.

Jake has THE WORST person on this show guiding him #theChi pic.twitter.com/MSUeDKRJOt

Kevin and Papa are especially in tune with their friend’s changes. They try to talk to Jake as he gets more combative, but it doesn’t work. So Kevin and Papa begin to separate themselves. They would rather take the bus than ride home with Jake and Reg after Reg tries to make them all fight.

For Jake, his idea of loyalty leaves him upset with his friends because he thinks they should back up his choices, support them, and stop trying to tell him what to do. It’s a mental game of tug of war that might end with Kevin and Papa just walking away.

Here’s a look at what else happened in this week’s episode.

Ronnie’s (finally!) not limping anymore. His body is healed and he shaves his face to look much more like the photo of him in the military that sits on the mantel in his grandmother’s house. He tries to show his friends on the block how to care for his grandmother for him, but Ms. Ethel scares them away with her shotgun — the same shotgun she used to scare away Detective Cruz in episode 4.

Turns out, it isn’t even loaded, but Ronnie realizes that he is unable to give her the care she needs. He makes an anonymous call to authorities reporting elderly negligence. And, he makes it right as he walks into the police station to turn himself in for Coogie’s murder. 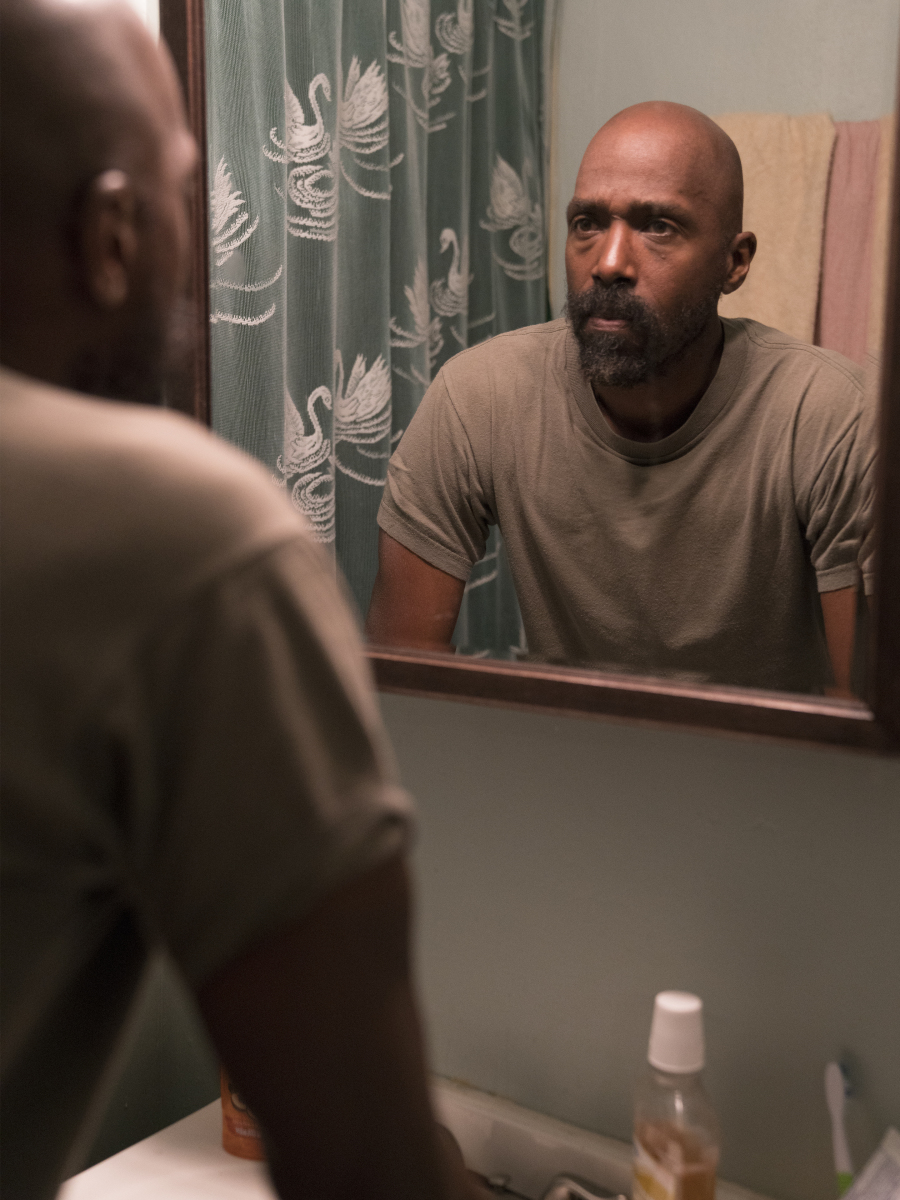 Tracy, Jason’s mother, is now a part of a support group for mothers who have lost their children to gun violence. She tells the group that her stepfather was a junkie who gave her to a man when she was 16 years old to repay a drug debt. The man raped her and got her pregnant with Jason. She tried to end the pregnancy by swallowing a bottle of Advil, but he took her to the hospital. So she’d made a deal with him that she would keep the baby if he let her go free.

Laverne comes in as Tracy is speaking and the two have an awkward but polite exchange when the group leader says that Laverne is Coogie’s mother. But after the meeting ends, Laverne stops Tracy outside to clear the air. She lets her know that although Coogie was questioned about Jason’s death, he wasn’t involved and was just in the wrong place at the wrong time.

I love seeing the journey of Laverne. Remember her at the beginning of the season?? All that grief but she is coming through on the other side! 🙌🏾 #TheChi 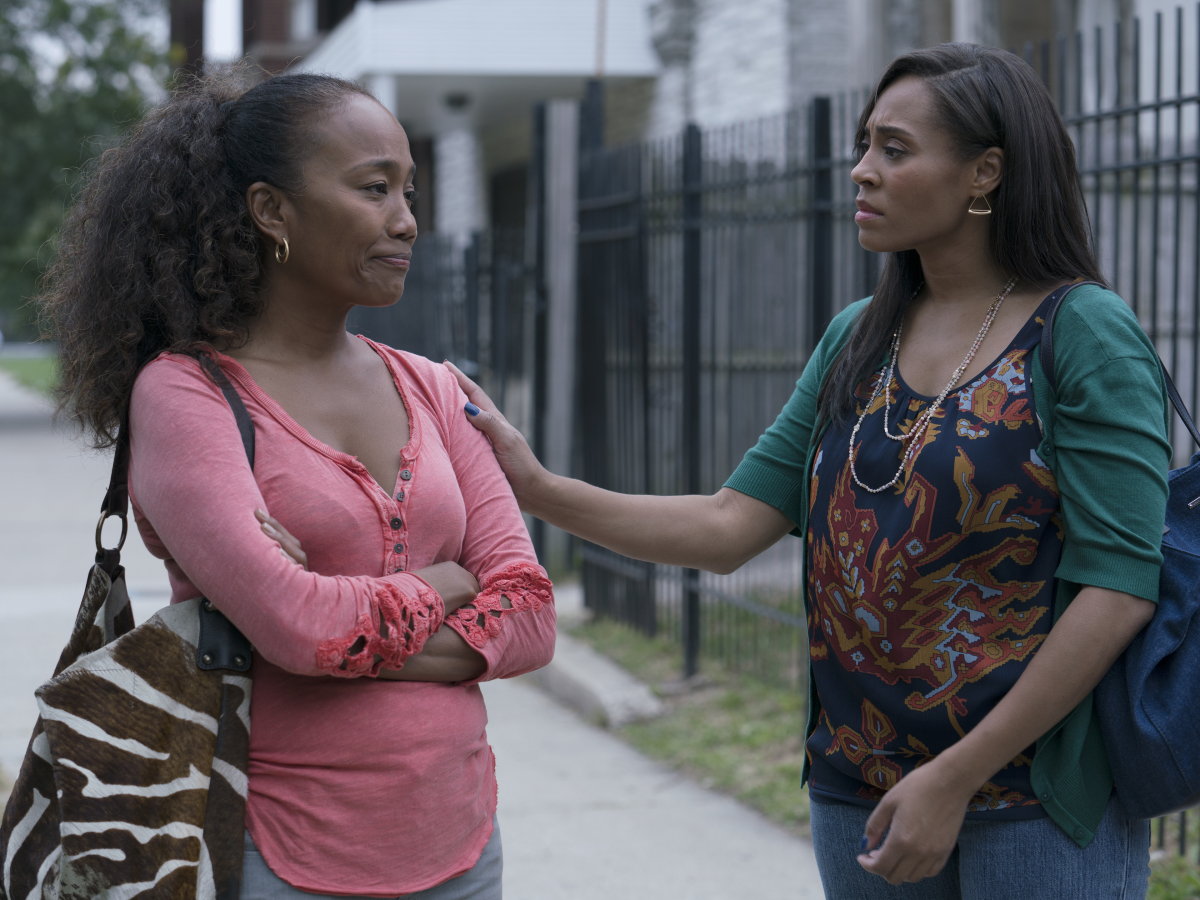 Quentin officially gets back in the game

After handling Reg in the previous episode, Quentin now has his sights set on two things: taking the business back from Trice and finding out who killed Jason.

Quentin hops in Detective Wallace’s car and tells him it’s about time they have a chat about their “mutual business interest.” He says he’s taking over the business to restore order. He gives him an envelope of money to show that he’s serious and asks who killed Jason. Quentin admits that Jason was his son, and Detective Wallace says it was Trice.

I told y’all! I told y’all Quentin was the daddy. #TheChi pic.twitter.com/aQS0cOFLef

At this point, we know that it’s probably the end for Trice. But it confirms the audience’s assumption that Quentin is Jason’s biological father. And Tracy’s story also shows that Quentin’s predatory behavior doesn’t just stop with the men he deals with on the street. Taking a 16-year-old girl as payment for a drug debt is not what most people would call “less Wild Wild West” and “more businesslike.”

A flipped Reg gets revenge — and an alibi

After agreeing to do whatever Quentin wants, Reg picks up Trice from yoga and tells him that his car is getting cleaned. That’s the last we see from Trice for a while.

Jake misses school and play rehearsal, and Kevin and Papa go check on him. Jake tells them that he doesn’t need to go to school because he’s now hustling like his brother Reg. While they’re talking, Reg pulls up and asks if they’re hungry. A reluctant Papa and Kevin go with them and see Trice’s yoga mat in the backseat. Papa asks Reg if he practices Bikram or Vinyasa flow, and Reg says that the mat is not his.

Getting in that car was a bad idea 🙄🙄 #TheChi

The conversation then changes to Kevin awkwardly explaining himself to Reg, who keeps asking questions about his love life. Reg gives him horrible advice about how to treat women, saying he needs to “be a man and handle your business” by keeping the girls he sees in check.

While they’re getting food, someone pulls up and asks Reg if he’s seen Trice. Reg tells him that he dropped Trice off at his house earlier and probably just has his phone off because he’s with a girl. He says he’s had his “young boys” with him all day, so he doesn’t know what Trice has been up to.

After the guy pulls off, Jake sees someone from school who has been talking about him. Reg pushes him to go start a fight with him and then makes Kevin and Papa back him up. The cops pull up, and all of the young kids get in trouble while Reg sits back and watches. After that, Kevin and Papa decide not to get back in the car with Reg and take the bus home instead.

Reg sent those babies off like that and then just standing there @SHOTheChi pic.twitter.com/pp6wEHKZAk

On their way home, Reg tells Jake that they have a final stop to make before they go home. He opens the truck and shows Jake what’s there: a tied up and gagged Trice who’s struggling to breathe.

Brandon and Jerrika mend their relationship and the new food truck

Jerrika gives Brandon a shoe box full of savings to fix up his food truck and get it in working condition. Brandon’s friend Luis then gets his family to do the repairs. They fix it up and get him a counterfeit permit to use until he gets a real one, and Brandon is out on the streets ready to serve.

He soon finds out that going into business for himself isn’t that easy; other food truck owners tell him what spaces he can’t take and threaten to report his counterfeit permit. So he moves and ends up parking somewhere else.

He serves his first customers and is really excited, but things might get hairy for him soon. Two guys from Reg’s crew recognized him in his truck, and Reg is probably going to demand his cut somehow — whether it’s a portion of the truck’s profits or actually selling drugs from it. Plus, Sarah tells Brandon that her husband, Chef, knows about their affair, which was apparently more than just a kiss that night.

Emmett tries to do the right thing

Emmett is still trying to get more money for EJ. Things are tight, and it even costs more for him to cash his check at his local currency exchange. He agrees to give money to EJ’s mom, Tiffany, to show her that he’s serious about being a good father.

But Tiffany’s boyfriend, Dek, says Emmett will have to slip him an extra bill every month to keep things smooth and to not make him an enemy.

Did the boyfriend just ask Emmitt for $100 a month so he can see his own baby?! #TheChi pic.twitter.com/y63AItRMcz

And Emmett is hit with another blow this episode. His mother, Jada, got a new job as the director of nursing at a facility — but it’s in Seattle.

What’s next? The season finale

Arionne Nettles is a digital producer at WBEZ. To share your comments and thoughts on The Chi, tweet her at @arialyssa.