Early on a Monday last month, the city of Chicago auto pound on the West Side welcomed its usual morning parade.

Every few minutes, tow trucks hauled vehicles into the gated entryway of the impound lot at 701 N. Sacramento Blvd., while a stream of visibly upset drivers crawled out of cabs and ride-shares, car documents in hand, to pick up their towed vehicles.

After hitching a ride to the impound lot from a friend, Alma Acosta, 23, said she got her car towed the night before for violating the Chicago’s winter overnight parking ban, which the city argues is necessary for snow plow access and public safety.

“It’s not snowing, I’m fine here,” Acosta remembered thinking when she parked the night prior. But even though weeks had passed since the last snowfall and temperatures on that Monday would top 50 degrees, her car still got towed.

Acosta’s vehicle was one of thousands towed during the winter overnight parking ban period that ended this month. The ban prevents motorists from parking on nearly 100 miles of Chicago streets from 3 a.m. to 7 a.m. between Dec. 1 and April 1 — whether or not there’s actually snow to be plowed.

For drivers like Acosta, the perception may be that the towing, ticketing, and auto pound fees collected through the ban are just a money grab by a cash-strapped city. But a WBEZ analysis of city finance and towing data suggests the money City Hall makes off the ban is so small, it barely covers the cost of running the program. In fact, Chicago could be losing money on the overnight parking ban after factoring in salaries and overtime for the city employees who help tow cars and the cops who write tickets, and the costs of traffic court.

But there’s one clear winner: a private towing contractor with a history of scandals and long-running connections to some of Chicago’s most powerful politicians.

The city argues the overnight parking ban isn’t about making money, but is a necessary precaution in order to keep streets clear of snow for plows and emergency vehicles during the winter months.

“The Chicago Department of Streets and Sanitation uses traffic management services like towing to keep streets safe and accessible year-round,” department spokeswoman Marjani Williams wrote in a statement to WBEZ. “The overnight parking ban ensures that DSS snow plows can clear vital roadways during the winter season keeping them clear and passable for motorists and public transit.”

But the city’s enforcement of the ban doesn’t bear much of a relationship to wintry weather. An earlier WBEZ analysis found Chicago drivers are actually least likely to be towed on days when it’s snowing. Last year, the ban was in effect for 121 days, but plow trucks were out on just eight of those days, according to data collected by clearstreets.org.

The questionable effectiveness of the long-standing parking ban — and its dubious finances — are now raising fresh questions about whether it’s good for Chicago.

“With the technology we have, we don’t need this archaic system anymore,” said Ald. Scott Waguespack (32nd Ward). “And they know it. The mayor’s office knows it. I don’t know why we can’t get off this thing.”

Breaking even, at best

A WBEZ analysis of 2017 financial data shows City Hall is barely breaking even by keeping the overnight winter parking ban around — and it’s likely losing money on it.

Here’s the math: Last year, the city made nearly $1.9 million off of towing and storage fees, according to figures from the Department of Streets and Sanitation. It raked in another $245,000 from tickets issued to drivers who violated the ban.

More than half the money generated — nearly $1.3 million — went to United Road Towing, the politically-connected private company that’s held onto the city’s private towing contract for nearly three decades. After paying out more money for salaries and overtime to the city workers who assist with the private tows, City Hall is only left with about $545,000.

That means the money made by the city off the winter parking ban last year represents a .00006 percent of its $9.8 billion budget. 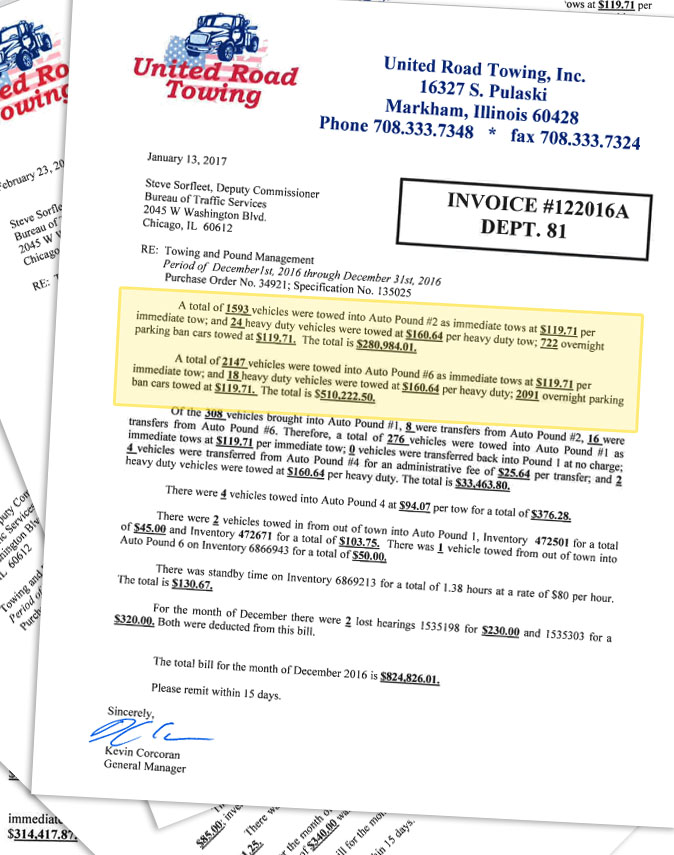 But further costs of keeping the ban in place could mean it’s actually losing the city money. The salaries and overtime of police issuing tickets, the administrative costs for traffic court, and man hours from the city’s Finance Department to go after scofflaws are unknown, but they could be sizable enough to cut away at the remaining revenue the city took in for the parking ban.

In its statement, City Hall didn’t dispute that the tow ban isn’t a moneymaker, but it said hiring a private company is still cheaper than using city workers.

“The City uses a private vendor for tow services including the overnight parking ban, which provides a cost savings as the fees paid by the City to the vendor include all operational costs such as driver salaries, fuel, tow trucks and equipment maintenance. These fees are negotiated in each new contract and may rise with inflation,” Williams said.

DSS did not respond to follow-up questions about why the city still enforces the overnight parking ban, despite the finances and its questionable relationship to winter weather.

The current ban is a relic of the fallout from1979, when then-Mayor Michael Bilandic was blamed for the city’s inadequate response to one of the largest blizzards on record. Then-mayoral candidate Jane Byrne ran a tough-on-snow campaign and unseated Bilandic in the Democratic primary. She later implemented “Snow Plan 1980,” which created the winter parking ban.

The numbers suggest the overnight ban was a money loser from the start. According to the Chicago Tribune archives, the fees and fines associated with towing a car for violating the ban totaled $70 throughout the 1980s. But the Streets and Sanitation commissioner said in 1988 that it actually cost the city $112 to tow a car.

That would indicate that Byrne’s “Snow Plan” bled city coffers of money from day one.

Need to change an ‘archaic’ system

Given the dubious finances and the questionable enforcement of the overnight winter parking ban revealed by WBEZ, one Chicago alderman is again calling for changes.

“This goes to the heart of what we’ve been trying to change for many years and that is the whole system as it is,” Waguespack said. “[If] you look at other cities further north — Minneapolis, where they have a lot more snow, Milwaukee — we have presented those models over the years and said, ‘Look, they do it a lot better than we do here,’” he said.

In 2014, Waguespack and five other aldermen wanted to evaluate whether the overnight winter parking ban still made sense, but their efforts went nowhere. The plan hasn’t been updated since, despite huge leaps in meteorological technology and an overhaul of the city’s snow plowing system.

Towing company with a long history

While the city could be losing money on the overnight winter parking ban, the clear winner is United Road Towing, the private tow contractor.

The company has a $60 million contract to manage the city’s towing, Denver boots, and impound lots. Despite changing its name, United Road Towing is known to have a checkered past.

It has previously overbilled the city for $1 million and was once caught up in a federal investigation into an interstate auto theft ring. In 2004, the company — then called Environmental Auto Removal — was the subject of a Chicago Sun-Times investigation that revealed Environmental Auto Removal was making money by selling towed cars as scrap. Despite the scandals, the firm has held onto the city’s contract for more than 29 years.

What’s more, it has been taking an ever-growing slice of the city’s tow fees over the last two decades. In 1997, the company was pocketing nearly 62 percent of the $105 tow fee for each car. Now, United Road Towing gets 84 percent of the $150 tow fee, and its slice of the pie is set to grow even more by 2020, all but ensuring City Hall will have to continue raising fees for drivers just to break even.

The city points to a number of factors for the price increases, including rising costs absorbed by the towing firm for fuel, driver salaries, and repaving impound lots. Even so, the contract has grown astronomically: United Road Towing’s contract with the city spiked from $37.2 million in 2010 to $60 million in 2016.

While its been making money and weathering scandals, the company appears to have maintained its relationships to some of Chicago’s most powerful politicians.

As the firm’s share of city business grew, so did its campaign contributions.

Over the last 18 years, the company, now called United Road Towing, and its top executives donated at least $11,000 to Ald. Ed Burke (14th Ward), the powerful chair of the City Council Finance Committee.  Ald. Pat O’Connor (40th Ward), who is Mayor Rahm Emanuel’s floor leader, got $6,800. And the chairman of the City Council’s Transportation Committee, Ald. Anthony Beale (9th Ward), received more than $1,000 from the firm.

Representatives for United Road Towing did not respond to several requests for comment.

United Road Towing filed for bankruptcy last year after losing a class action lawsuit for illegally towing vehicles in Nevada. The bankruptcy protected the company from paying out the $5 million judgment.

It was then bought by its majority stake owner, Medley Capital Corp., an investment firm.

Back at the West Side impound lot, Alma Acosta was frustrated to learn that so much of the money she’d have to pay for getting her car towed would be going to a private company.

“That’s ridiculous!” she said. “[To] find out that it’s all just to run these things” — she gestured toward the impound office — “is so pointless.”

Elliott Ramos is a digital editor and does data reporting for WBEZ. Follow him at @ChicagoEl.

How We Did This

Determining the cost of the overnight parking ban is not straightforward.

The costs of impounded vehicles were determined from inventoried vehicle figures provided by the Department of Streets and Sanitation (DSS). The figures were confirmed with invoices obtained through a Freedom of Information Act request to the DSS.

The amounts paid for tickets were determined using ticket data obtained through a Freedom of Information Act request to the city’s Department of Finance. Sifting through millions of tickets, we isolated the data to tickets with the violation description matching “3-7 AM SNOW ROUTE” or Violation Code: 964060.  The ticket data represents a snapshot from the time of the request. The percentage of tickets paid and bankruptcies were summed from data current as of April 2017. Ticket data can be found here: 2016 | 2015

Updated ticket data for 2017 was provided via another FOIA request by our good friends at ProPublica Illinois.

Towing data was provided via another Freedom of Information Act request to DSS. The data represented all inventoried vehicles towed by United Road Towing. The data came with geocoded locations as well as reasons for tow. We isolated tows categorized as “snow tow - immediate” and compared them against inventoried vehicle counts.

Plow truck data from the website clearstreets.org was used to verify when the plow trucks were on the streets as it related to snowfall. The website regularly scrapes GPS tracking of the city’s plows.

Headcount for the city workers accompanying tow truck drivers were determined using a Freedom of Information Act request to the city’s Department of Human Resources.

The price structures for towing were determined using copies of contracts made available by the city’s Department of Procurement. The price tables were compiled using contracts for the previously named Environmental Auto Removal in 1997, 2000 and 2004, and contracts for United Road Towing in 2010 and 2016.

Campaign contribution data was collected from the Illinois State Board of Elections website. Filtered data can be found here.

Determining historic fines and fees for tickets and towing was done by pulling archived Chicago Tribune articles from the ‘80s and ‘90s. The previous rates are not readily available by the city, but the overnight parking ban and its associated fees were regularly chronicled by newspapers at that time. Those articles are cited here.